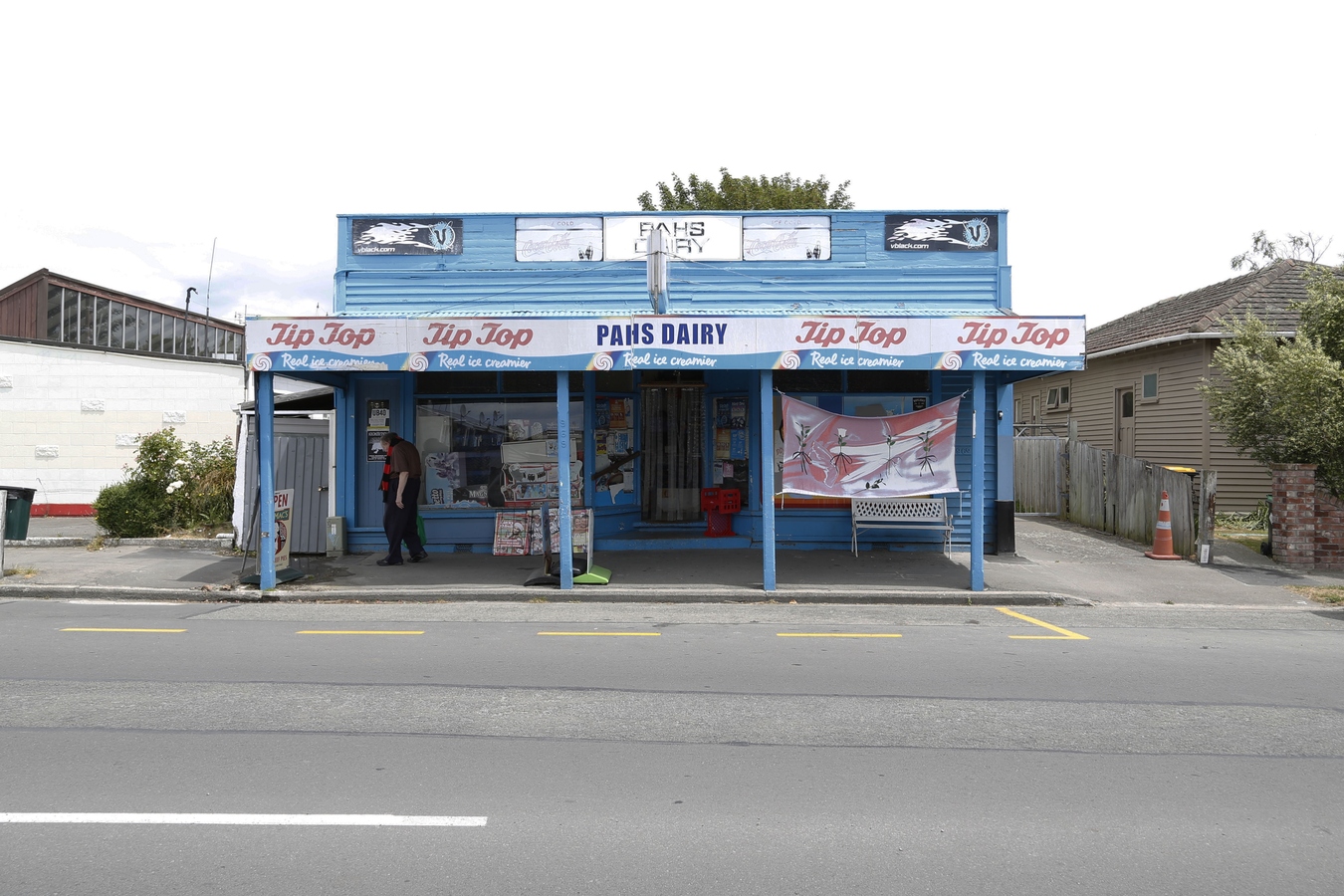 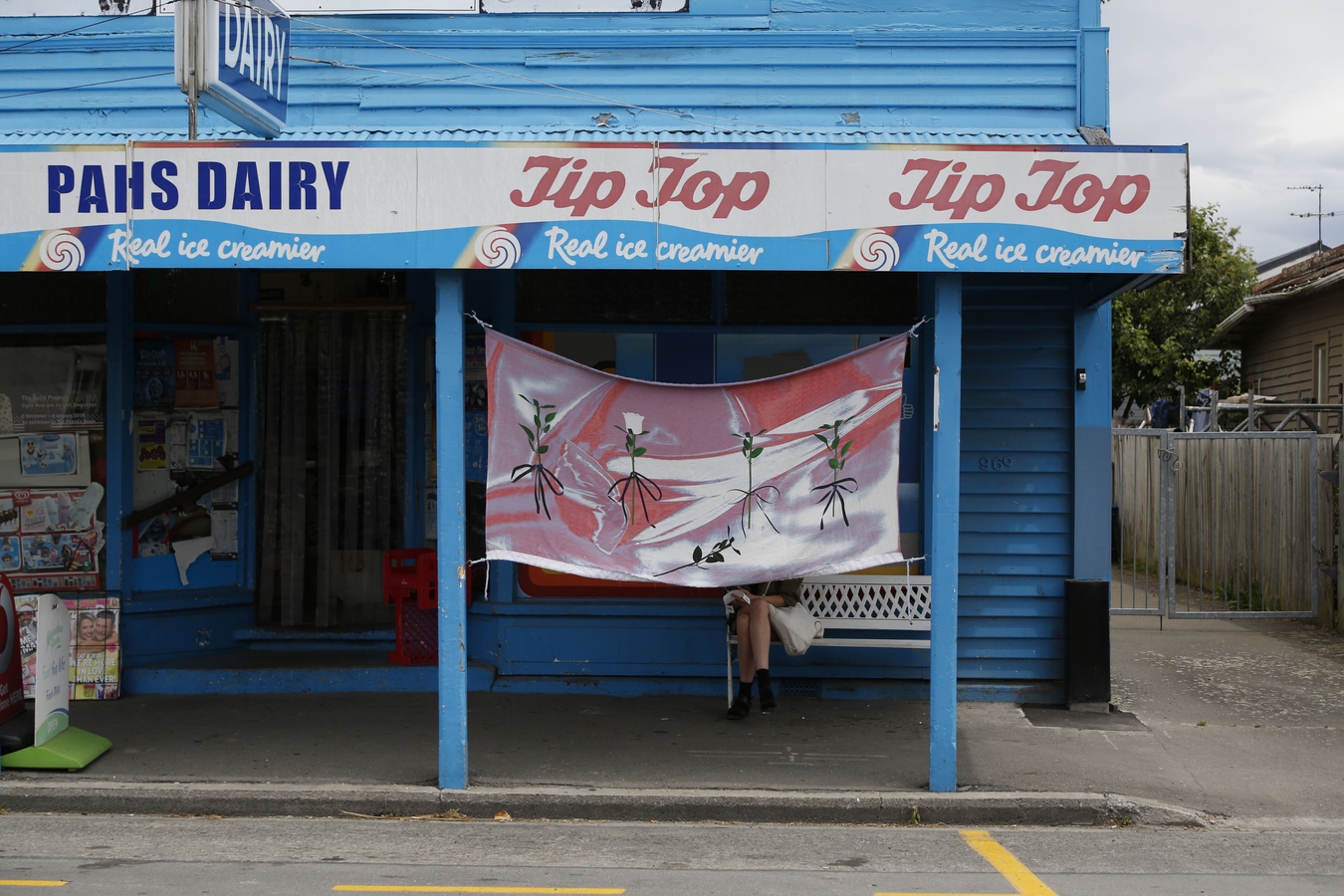 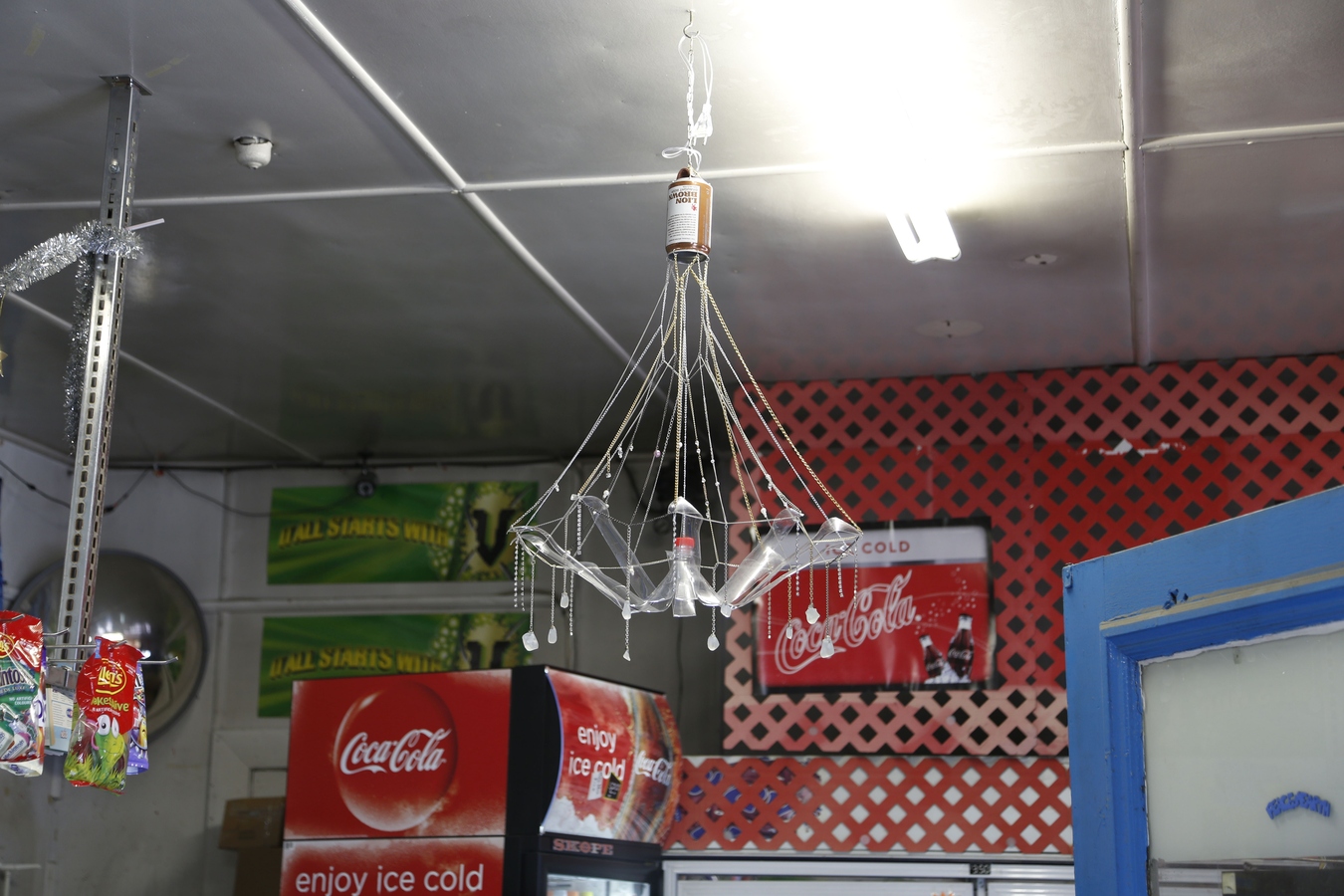 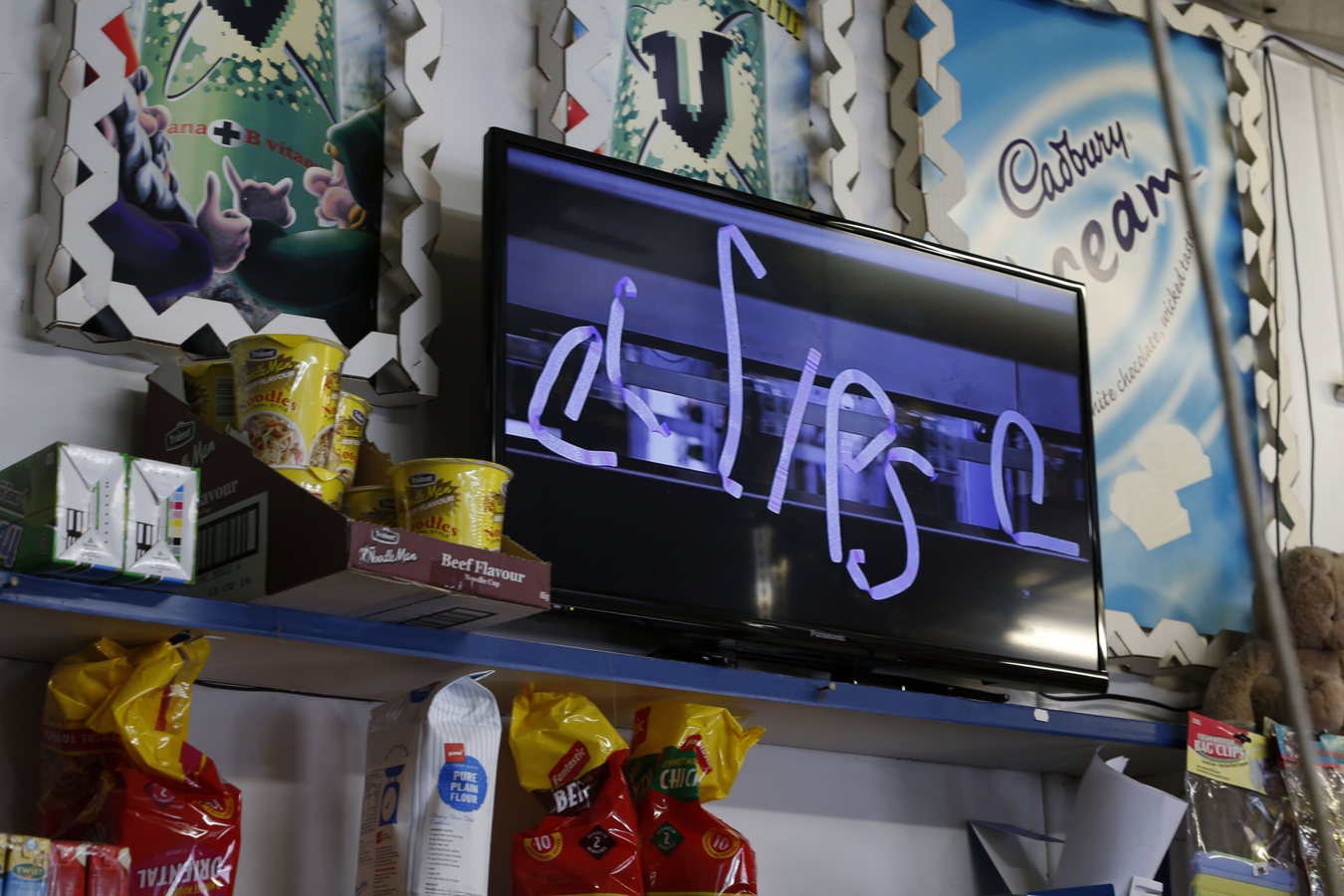 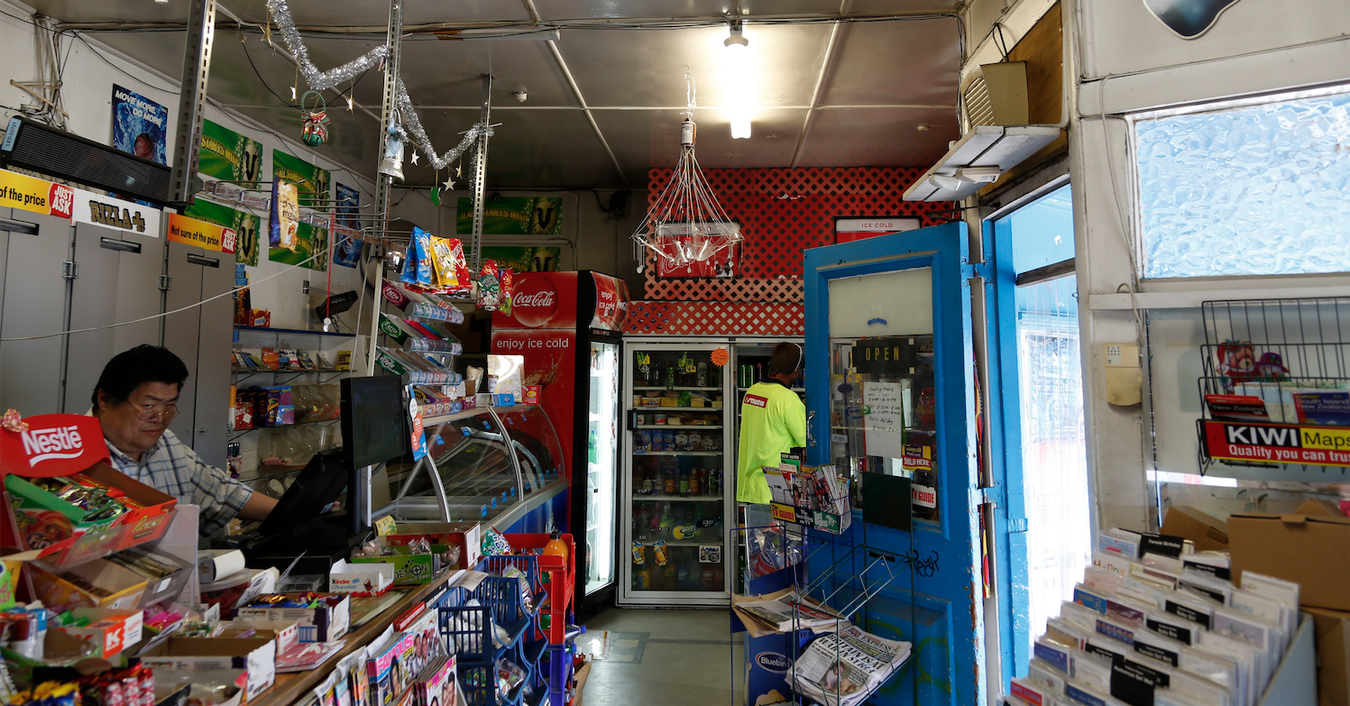 The dairy is a beloved cultural icon. A cheerful facade on any suburban street; typically plastered with advertising, graffiti and a bright, all-over paint job in the colour of a trusted brand, the dairy is a hallmark architecture of convenience. In Christchurch after the earthquakes, these small grocery stores have become visual bastions of a former pedestrian life. In the sparse landscape of the rebuild (of the central city and affected suburbs), the classic “kiwi” dairy is hard to find. It seems, the appearance of the dairy has become more like a street stall—part of a visual language that indexes and laments a more dense and cosmopolitan urban life.

At Pahs Dairy in St Albans, The Dairy Project features works by Sorawit Songsataya and Signe Rose that draw attention to the social and linguistic space of a dairy. From the days of the depression, dairies have often utilised the front room of a household. The same use of architecture has been continued by immigrant families from India and China who have, since the 1970s, become the major group of owner-operators of dairies in New Zealand.(1) Contrary to common belief, dairies make their profit not from the mark-up on goods (which cannot be bought wholesale) but from long opening hours, and therefore the dairy is almost always family-run: a commercial venture supported by the interpersonal relationships (and literally, the architecture) of the home.

Signe Rose’s mobile accentuates the notion that dairies are a visible threshold between commercial and private space. Combining both fetish and utility, Rose’s chandelier is lazily constructed of things in her immediate environment—a beer can, coke bottle, chains and jewellery findings—brought together in a design that balances handcraft and industrial production. A moving image work and sculpture by Sorawit Songsataya takes a closer look at the practice of selling cut flowers, a defining characteristic of many dairy shop fronts. With 3D animated forms and footage taken in a family-owned nursery in West Auckland, the video work attends to ‘real’ themes of authenticity and artificiality(2) in the industry of rose consumption in NZ. Layering the speculative language of branding over scenes from the factory floor, Songsataya’s video reconfigures the relationship between the organic and the synthetic, making a feature of the back end of production of the most banal and immaterial symbols of love, the cut rose.

(1) Requiring a relatively small amount of capital to set up, the dairy business model has offered a way for migrant families to settle here, send their children through school and enter an otherwise difficult workforce.

(2) In recent years, many cut flowers have been imported from overseas at very low prices, especially roses, effecting local flower-growers. However, the flowers risk breach of biosecurity law and have to be immersed for 20 minutes in herbicide to kill bugs, in turn shortening the bouquet’s lifespan. The two types of flowers look identical on the shelf, meaning consumers have little way of identifying the ‘dead’ roses from the live ones.

Signe Rose is a New Zealand artist living in Vienna, where she is studying at the Academy of Fine Arts. Recent works were presented at Belle Air, Essen; Michael Lett, Auckland; Künstlerhaus, Graz and Paramount Ranch, LA (Shanaynay presentation). Later in 2015 she will be showing at Tonus, Paris with Louise Sartor.