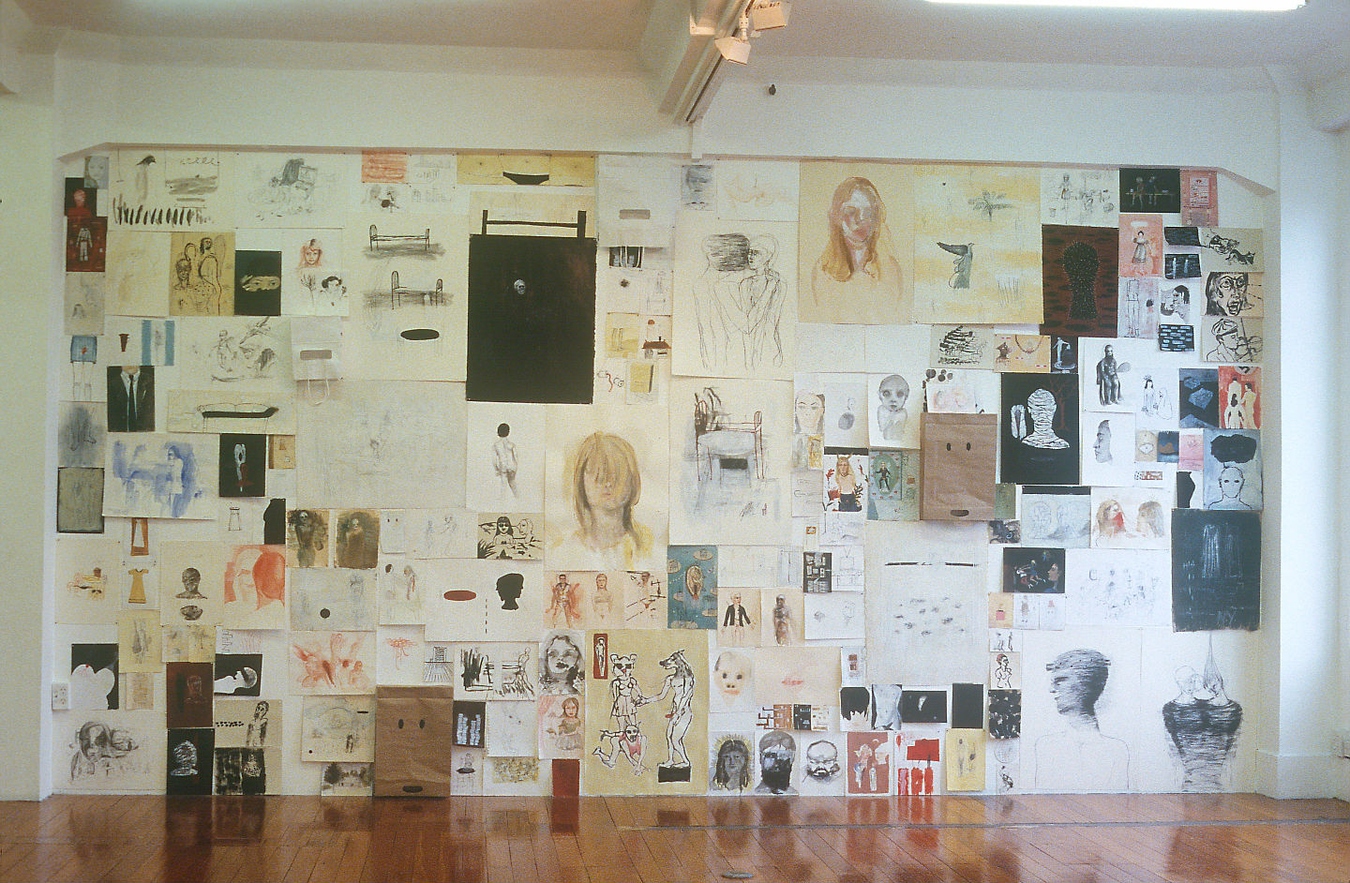 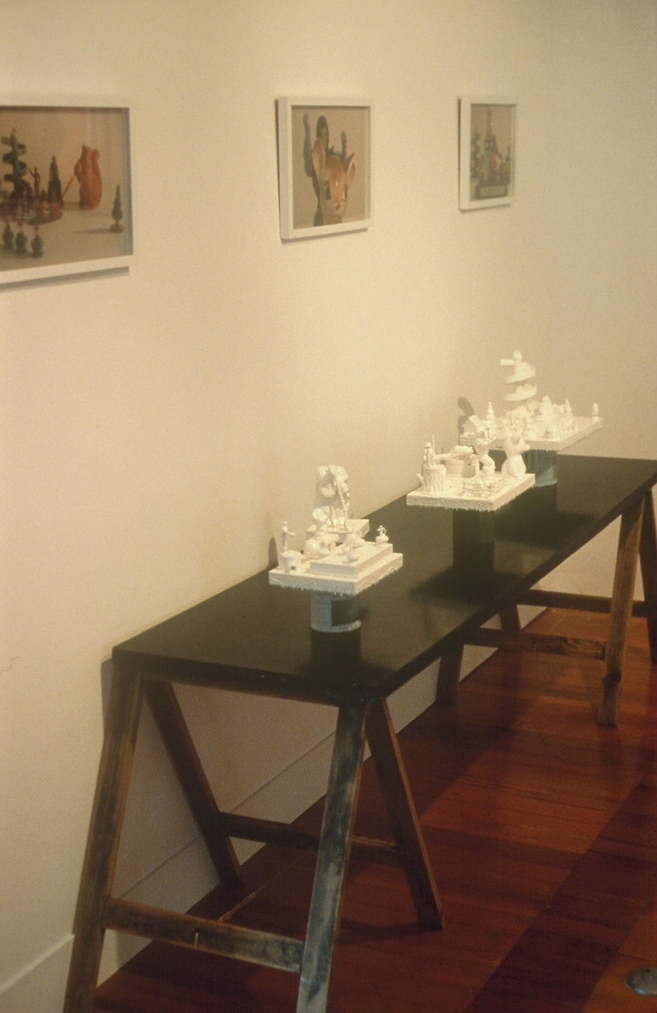 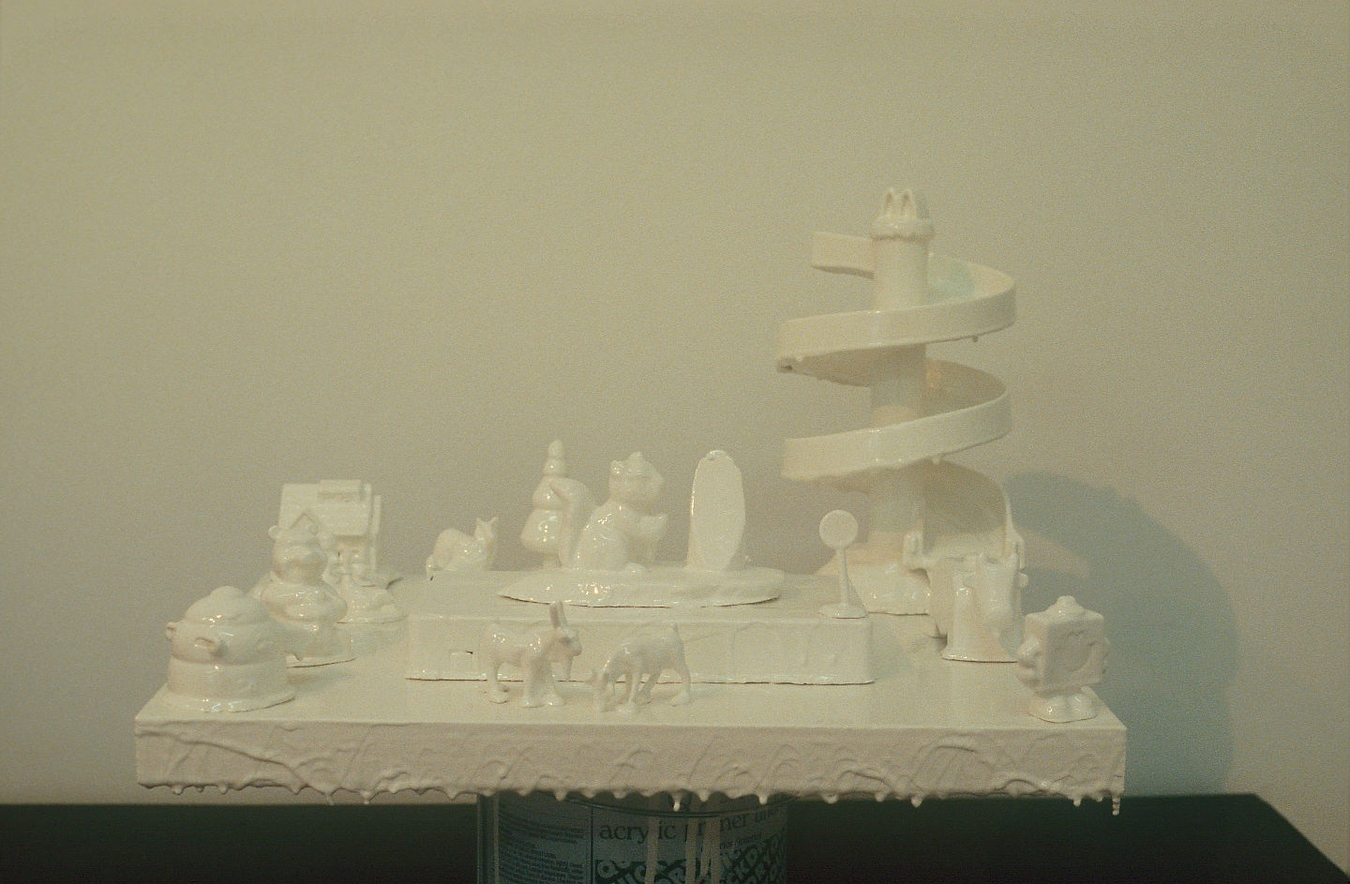 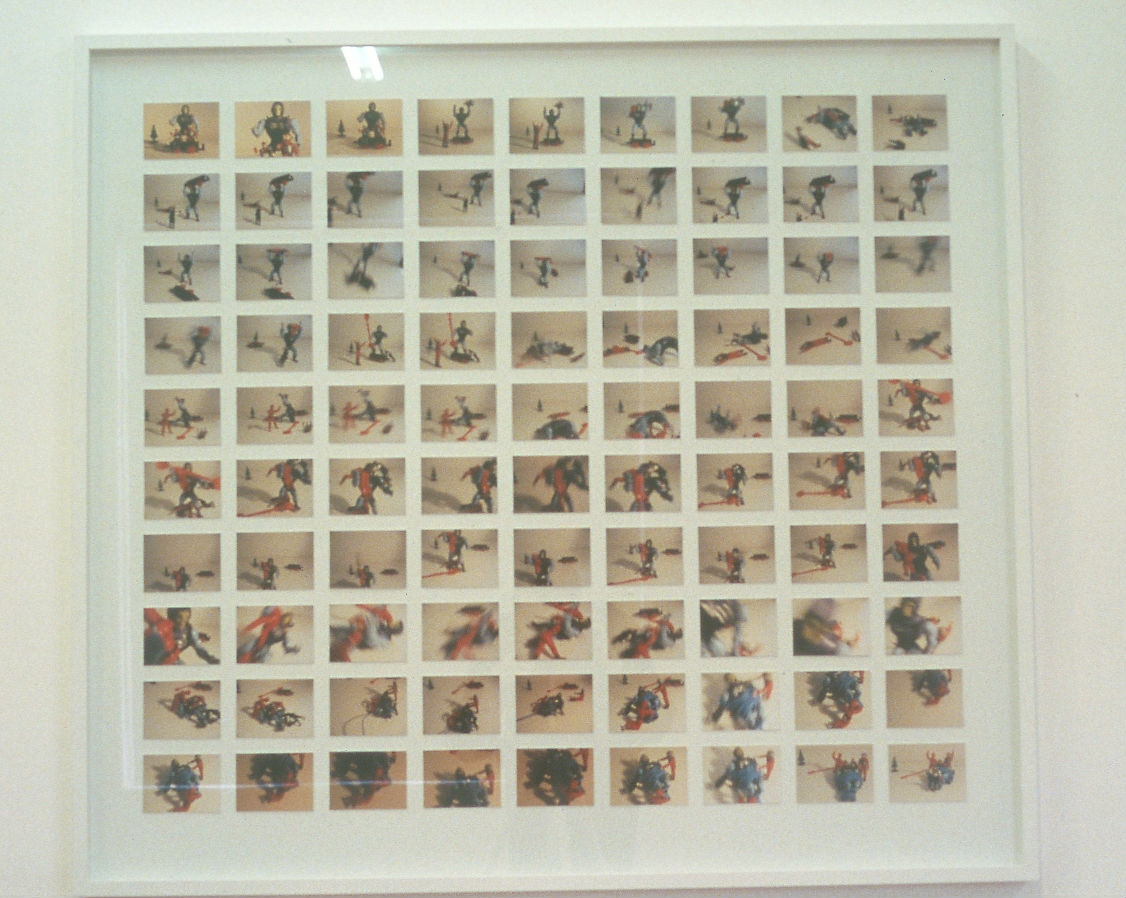 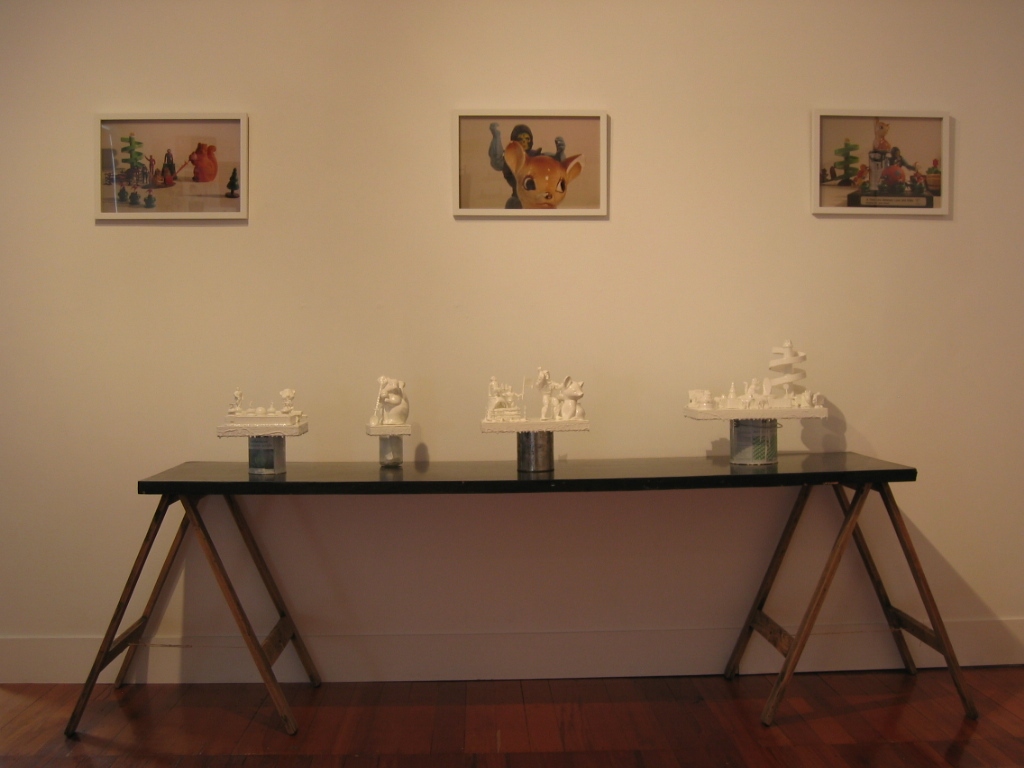 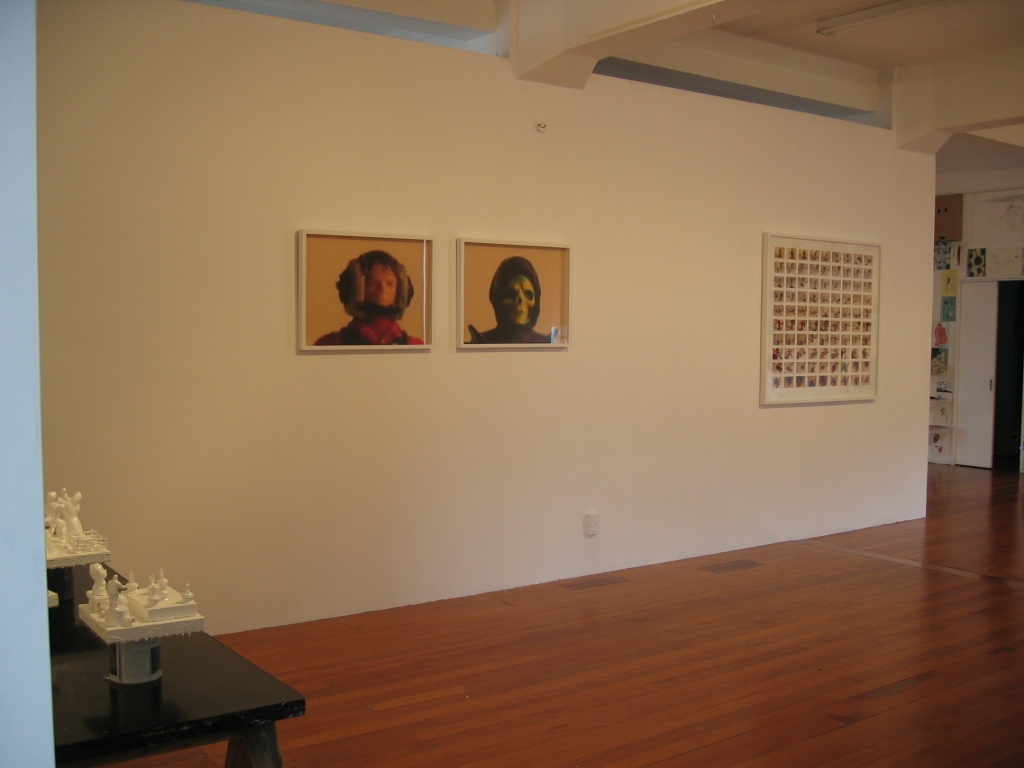 A passing glance through a façade and into the painted, drawn and constructed interior scapes of Séraphine Pick and Oliver Perkins reveals an acutely humorous artistic perceptual ability that selects and critically comments on the human condition.

Encouraged to look with a child-like sense of fascination at the obscure things of life and remember the distinct resonance of objects, that together form a visual anecdote, we are left with the sense that we may have almost lifted the trap door to a far more real world than the one we inhabit.

The ‘real’ visual urbane trash of our everyday lives is re/presented by both artists as an eclectic collection of dissatisfied characters and aimless icons who have the inside knowledge on why they are gathered together - smirking, smiling, isolated, reminiscent, champions of the good, the evil and the indifferent, theirs is a disquietingly silent, social commentary: the splinter beneath the skin.

An exposé of narratives that dangle like loose threads is subverted by the overt references to process and practice in the works themselves. Any beguiling illusion that we have been invited into the ‘interior’ is curtailed by a slice of masking tape, a scratch, a driplet; those physical things that are tangible.

Séraphine Pick installs ten years of drawn marks that are a collation and reflection of an enormously productive art practice. The interior processes that have built to form the works that now hang on other walls, are presented here as a visual monologue populated by objects and figures that are infused with stories of their own as each new exhibition was reviewed and increasingly autobiographical allusions were made regarding the origin of the figurative subjects.

“I have worked this way, using many layers of drawings and painting, to evoke a dreamlike quality and a thinking process - as memories are never quite clear or real.

Images trigger unconscious associations of play like the imagery of dream or humour.”

Pick created surreal ‘scapes’ as a vehicle to explore the marks being made on the surface, the drawn line, the inevitable layer of oil; the practice of painting. Now Séraphine Pick is concerned with showing concrete subjects that are easily accessible from within her immediate physical world as opposed to the refractions and illusions of a captured glimpse of phantasmagoria and reverie mascarading as autobiography.

Oliver Perkins constructs makeshift worlds, germinated through an environment of play - mimicking the ‘real’ or subconscious observations of children. Revealing the theatrical nature of imagination and the interior workings of play, Perkins is true to the self-sufficiency of materials, and with a child-like gravitational pull he is prepared to use anything to keep the game alive.

“The irony is that with my artistic education and intentions I can only pretend to play.”

The works he has presented for Interior World are paint dipped, and deliberately aesthetically lo-fi arrangements that are an extension of Perkins painted figurative fantasies of 2003. The previous caricatures inhabited a collection of fractured ‘boxed-off’ elements each with their own tale, they were often a submersion of the artists own personal narratives masked by an interest in advertising, consumer behaviours and a fascination with icon collecting and creating.

The images and sculpted pieces are a sleek combination of well-finished stark white craft and a map of the marks of the mark maker. The autobiography exists in the visual traces of where the artist has been and through the evidence of his collection and selection in the final image.

Séraphine Pick is a nationally recognised painter who lives and works in Dunedin. She received the Olivia Spencer Bower Award in 1994 several years after her graduation from the University of Canterbury in 1987, was awarded the Rita Angus Artist in Residence in Wellington in 1995 and received the Frances Hodgkins Fellowship in Dunedin in 1999.

Oliver Perkins is a painter, sculptor and installation artist who has exhibited comprehensively locally, and in Auckland since graduating from the Christchurch Polytechnic three years ago. Perkins recently received a national scholarship to complete a Masters at Chelsea University in England for 2005.