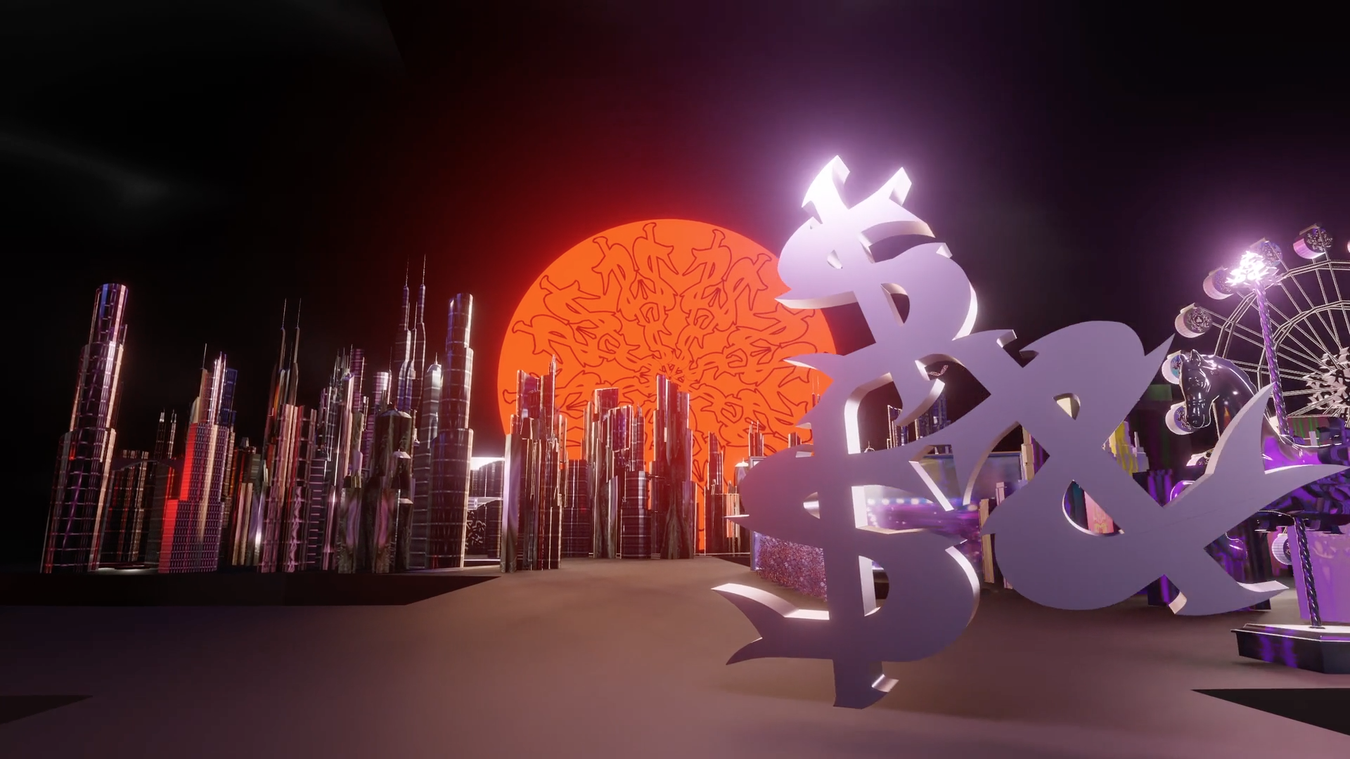 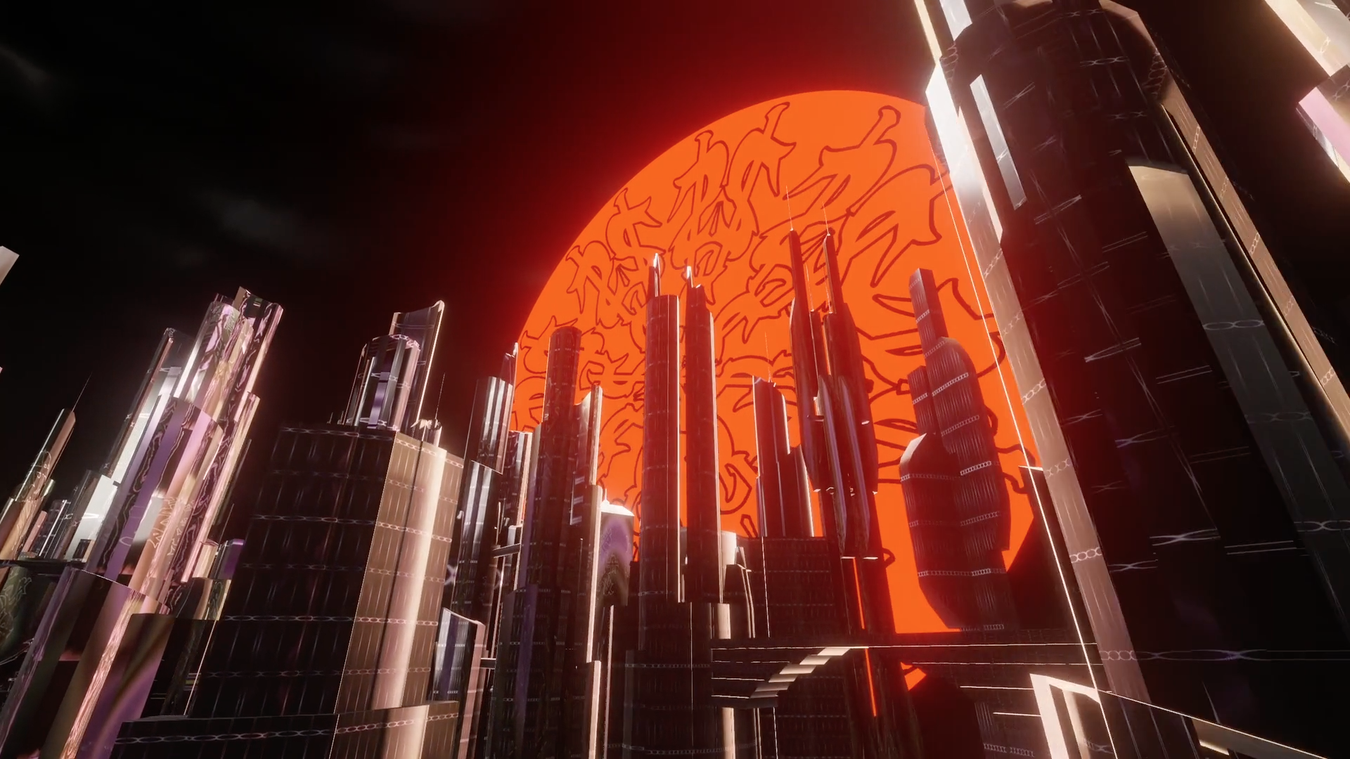 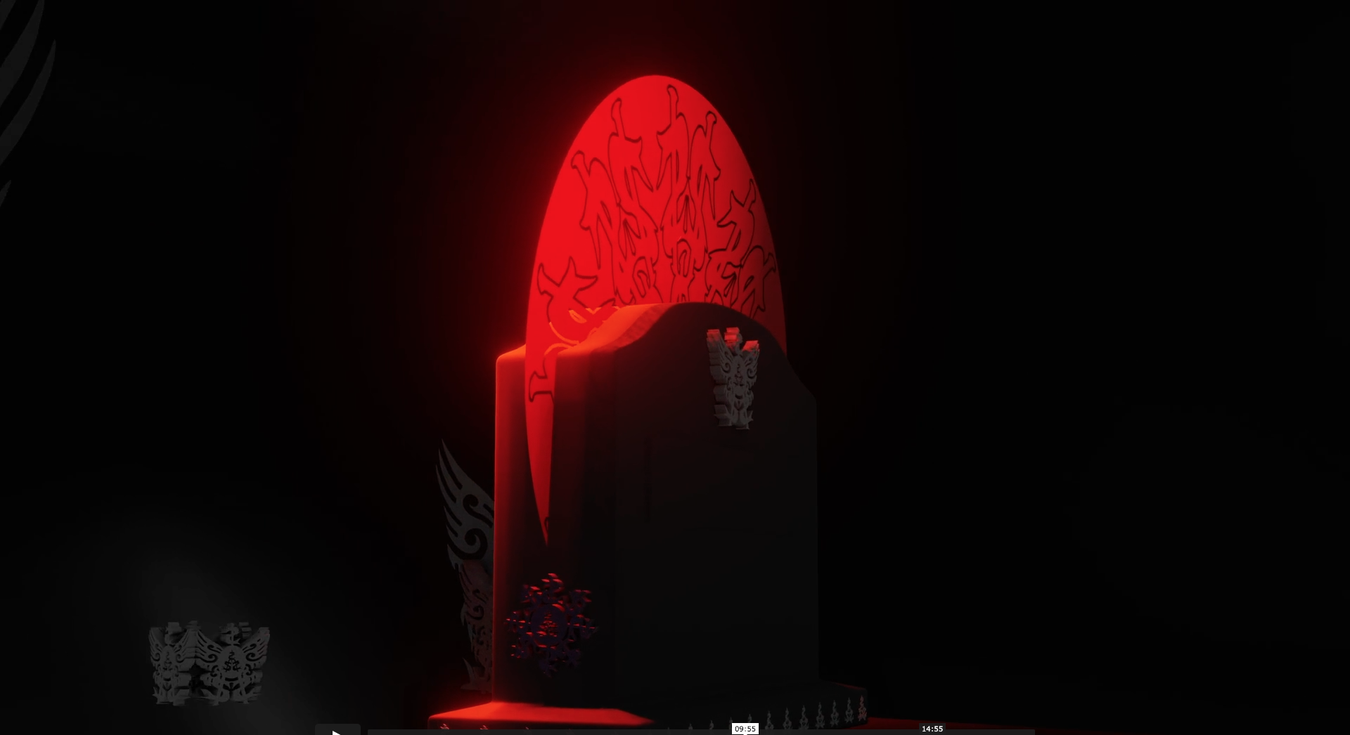 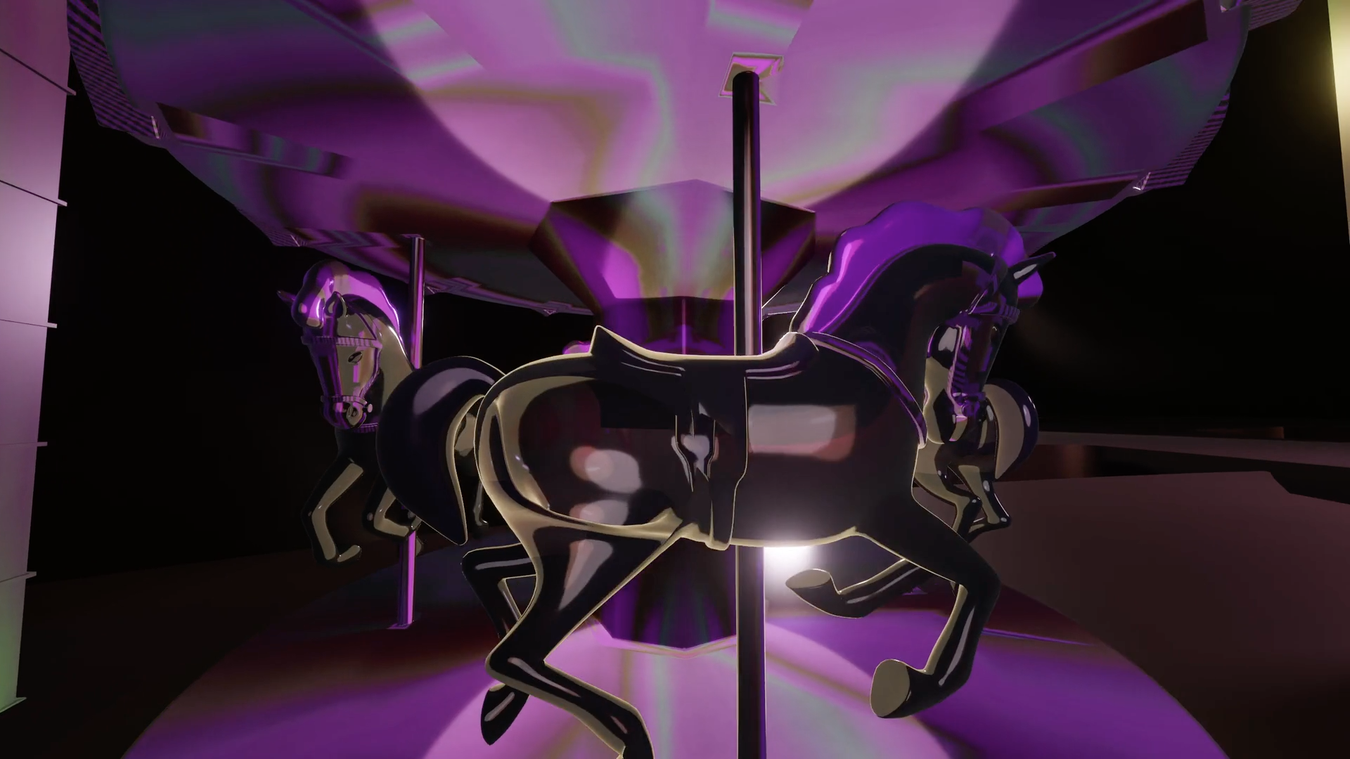 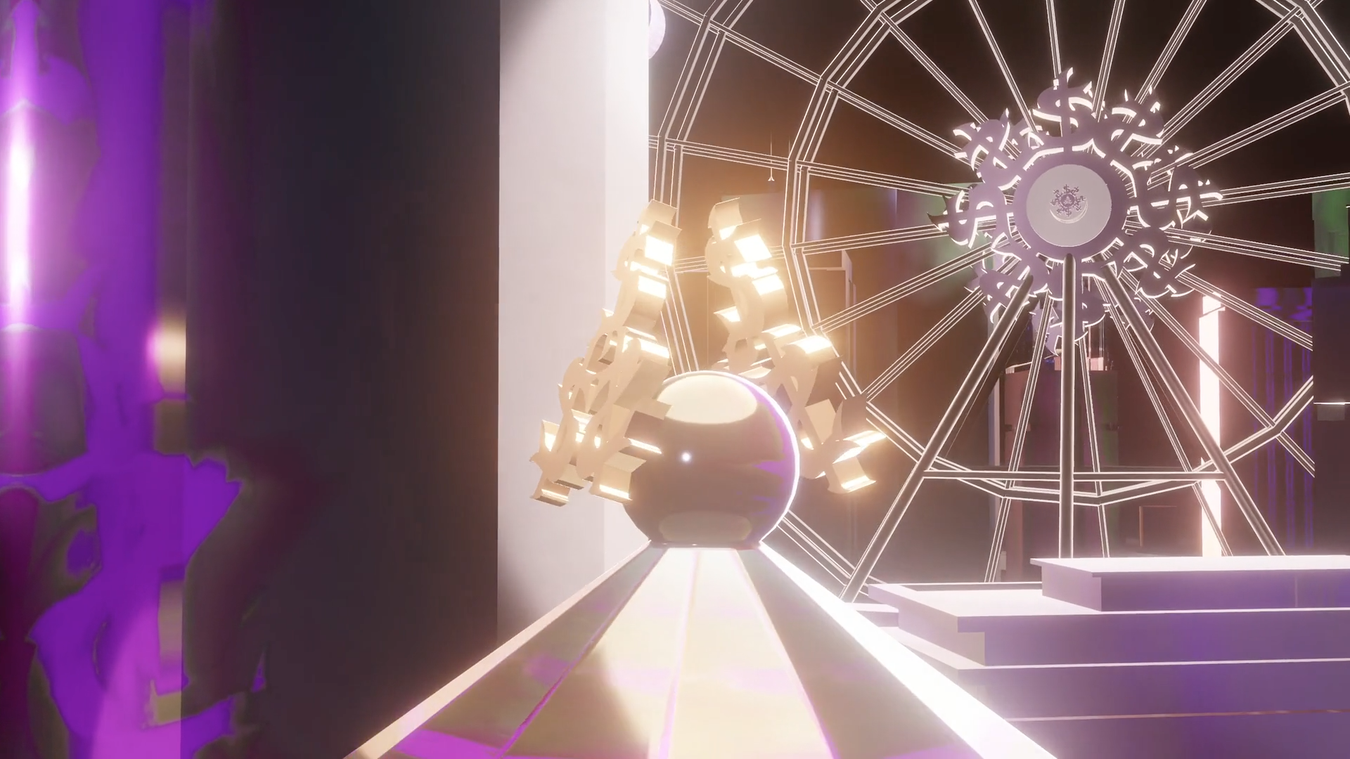 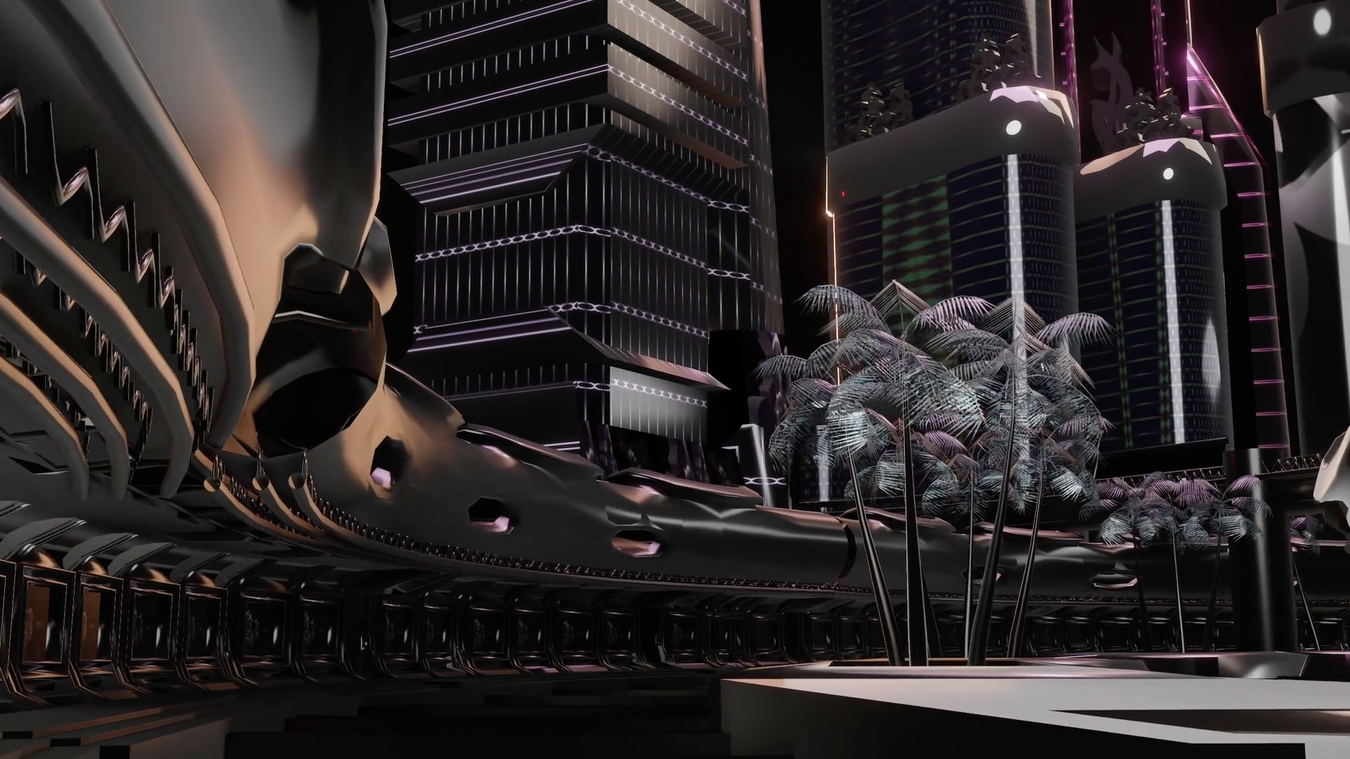 Please note that while this venue is larger than our gallery space, under Level 2 restrictions we will still be asking you to sign in, wear a mask, and socially distance.

Ether is a flammable chemical: colourless, sweet-smelling, liquid at room temperature. Toxic to humans in high doses, it is also used as a sedative or anaesthetic, and taken to produce a high. In literature, the word ether is used metaphorically, to mean a distance beyond immediate perception; in early physics, to describe an elastic substance that fills all spaces, and whose vibrations result in light and sound.

Xi Li’s video work Spirit Ether draws on some of these associations, presenting a world in which capitalism determines not only the aesthetic of cities, but also permeates a spiritual realm. In this vast projection, the viewer is swallowed by a digitally-modelled space, where scale and perspective are distorted by their functions within capitalism: to sell. Outsize symbols—carousel horses, billboards, jumbo jets, pagodas, skyscrapers, yuan signs, dollar signs, a series of colossal babies—loom and recede as we move through the no-space and no-time of the video. A heavy backing track suggests the pulse of the internet, or the hectic internal mechanisms of this social reality.

At a point in the film the scene shifts: we move into a more serene setting where the world appears luminescent and dewy, if not life-sustaining. The soundtrack parallels this shift, but this is still a simulation. There is no rain; the butterflies shine like polyester. Li notes, “It is difficult for people to make a clear distinction between the [simulation and reality]. Capital logic is the material and spiritual power that dominates modern life; the radiant light and the spirit ether that guides the human heart.” Within this logic, online and offline spaces merge. Feminist media researcher Maya Indira Ganesh writes of this convergence, “The need to clarify if we were online or offline when we did something—the ‘where we were’ becoming hopelessly enmeshed with ‘who we are’—is fast becoming a relic of a particular time.”

These questions of where we are, and who we are nonetheless remain present. Li uses imagery from Eastern and Western traditions not only to emphasise the global experience of accelerated capitalism, but also to assert how questions of identity—as unique, self-determined, shaped by human bodies, relationships and desires outside of consumption—still matter deeply. Difference matters. Ganesh again: “The internet is a real place and what happens there is real. Its relationship to ‘meatspace,’ or the space formerly known as ‘real’ life, is a concern for institutional thinking built around the notion of a human who is real, reasonable (usually a cisman, a White man, a middle class Upper Caste man) and not a being that is contradictory, partial, illegal, or unstable.”

Li’s digital city is not only an expression of the relationship between virtual and real, it also reveals the way that the psychological and spiritual experience of capitalism is ubiquitous across the spaces of the internet and physical reality. Experiencing this work, you may recognise symbols, surfaces, textures that you are familiar with: the internet is already a part of real life. The focus then shifts to the kinds of decisions we can still make about this aspect of real life. Rather than just a shining space for digital consumption: sedative or anaesthetic, calibrated solely to produce a high, can it be a place in which we are still able to recognise ourselves?

This project is enabled through the generous support of the Gough Family. We would also like to thank Shipleys and SALT District.

Xi Li 李曦 is an interdisciplinary artist from Harbin, China, based in Tāmaki Makaurau. She received a Bachelor of Photo Media from Whitecliffe College of Arts and Design in 2019. In 2021 she received a Master of Fine Arts at Elam School of Fine Arts at the University of Auckland and was awarded the Iris Fisher Scholarship. Xi Li's practice includes film, digital images, photography, sculpture, installation, performance, 3D animation, VR, and game design, and is shaped by ideas of identity, ideologies, subcultures, popular aesthetics, and social commentary.