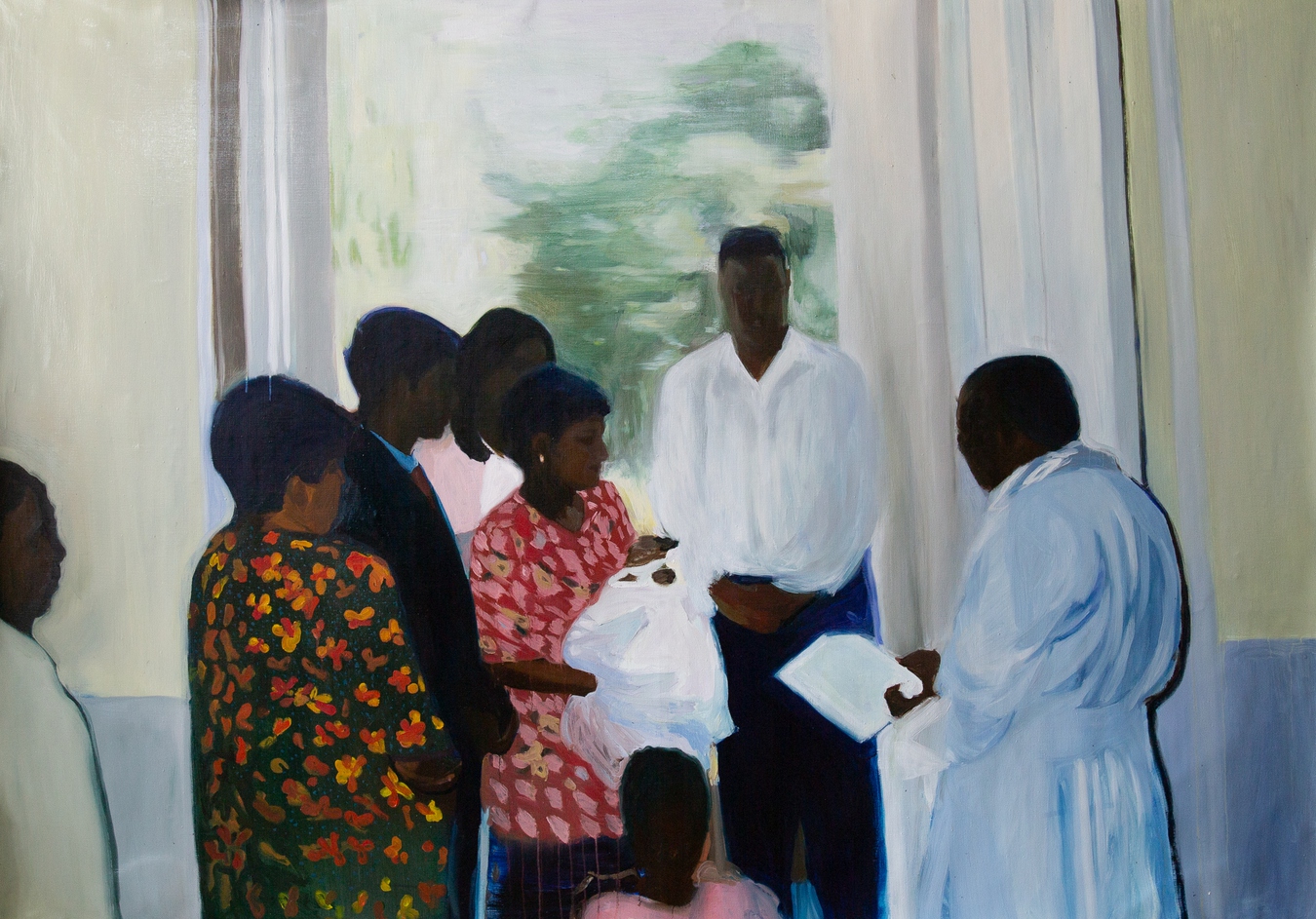 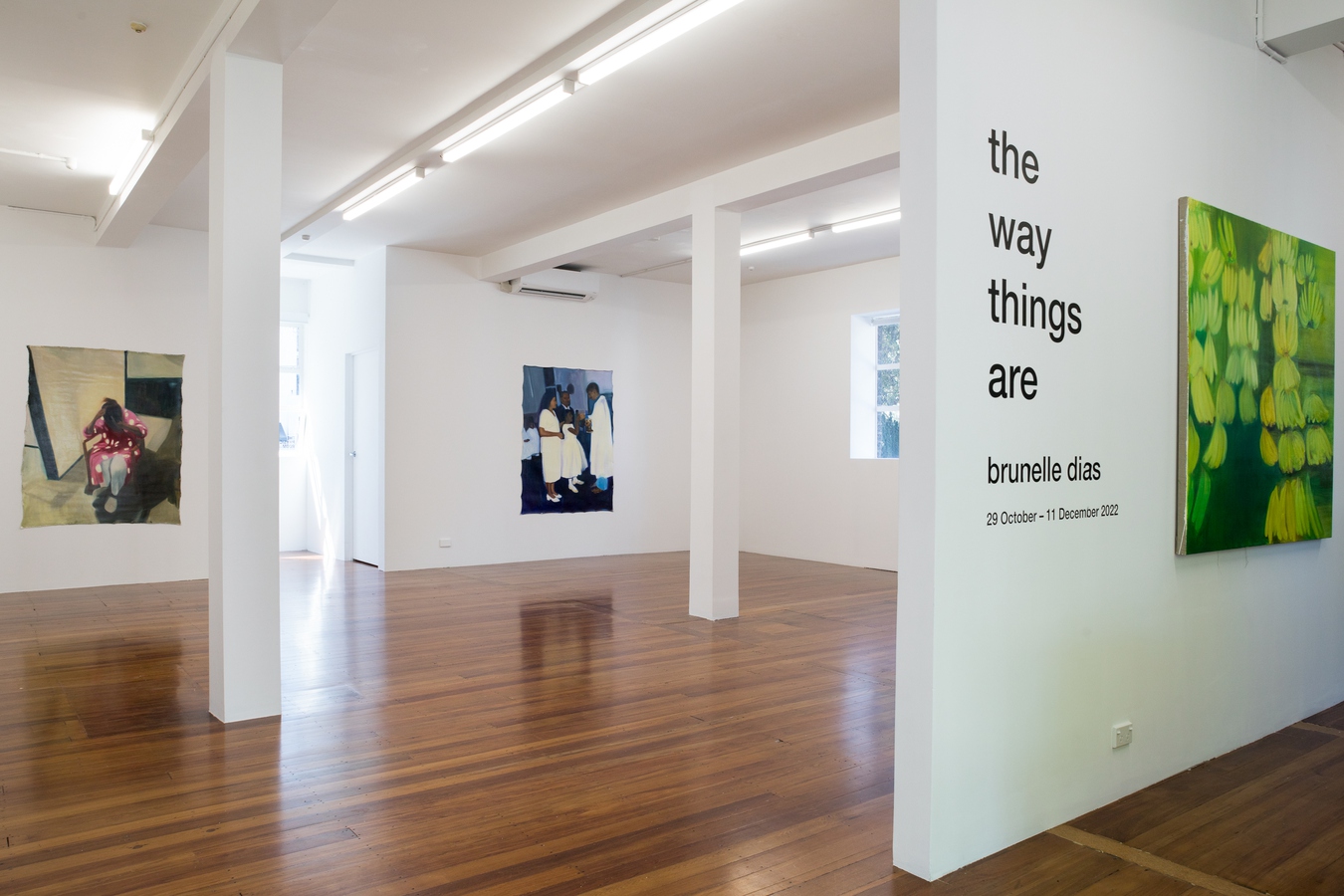 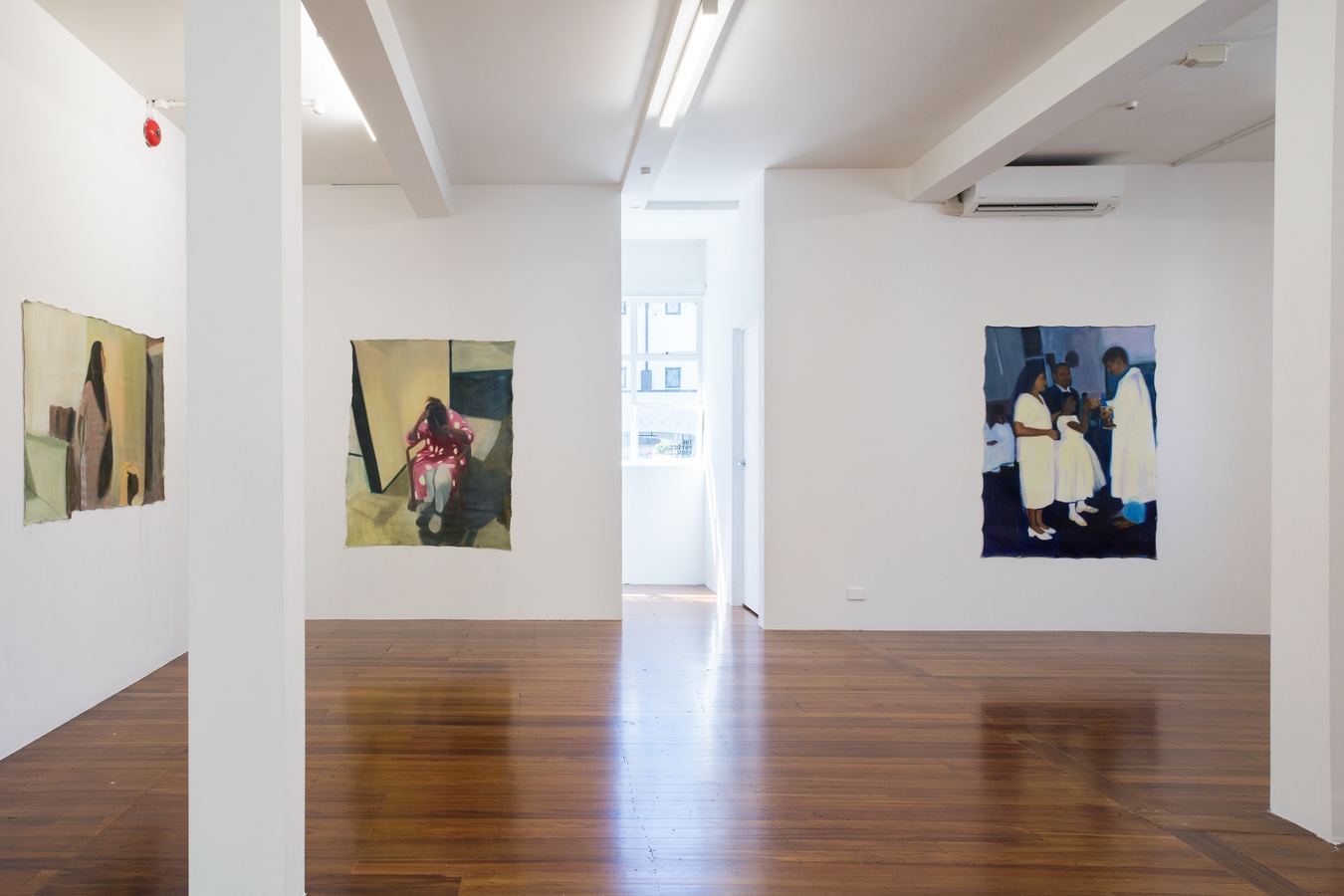 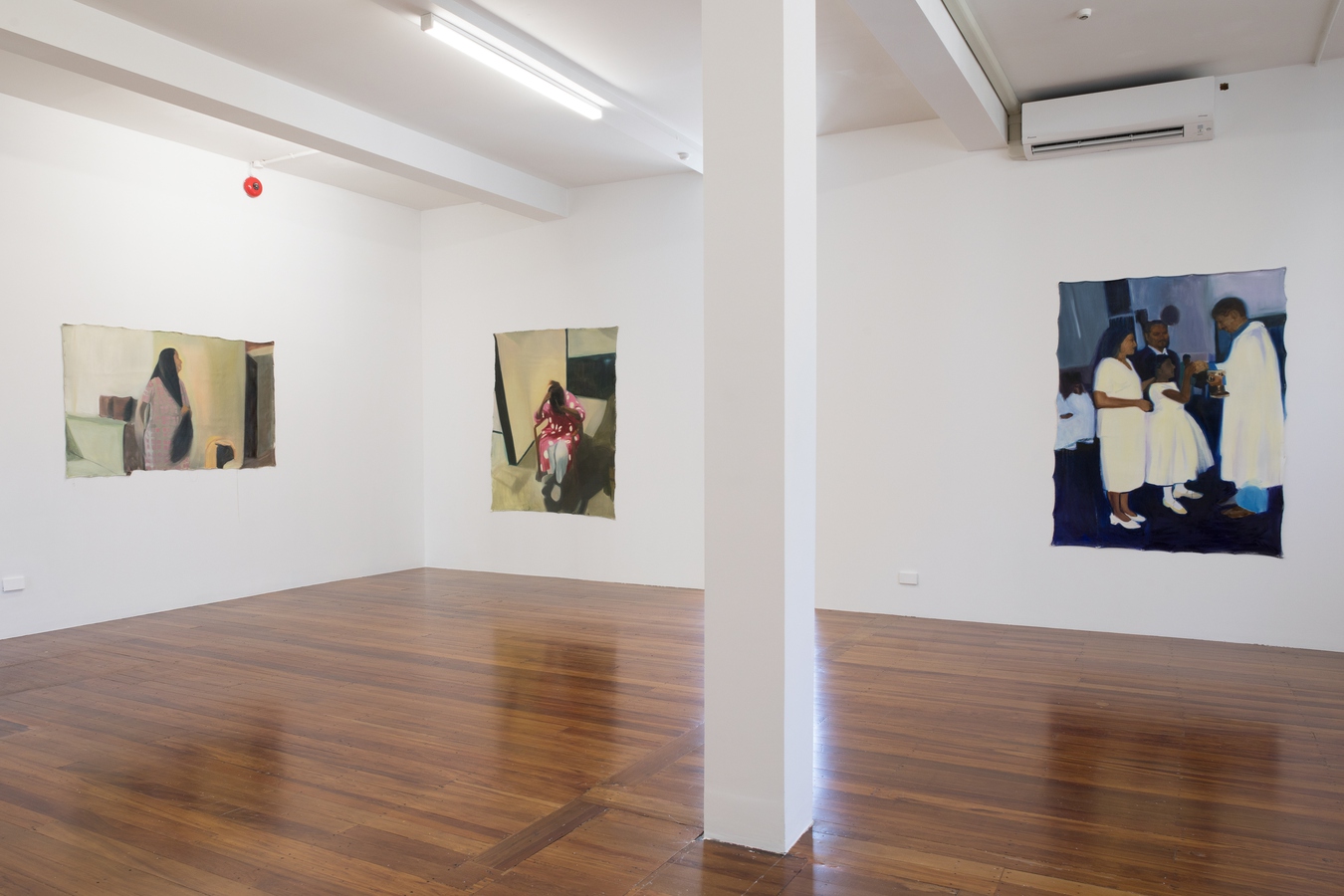 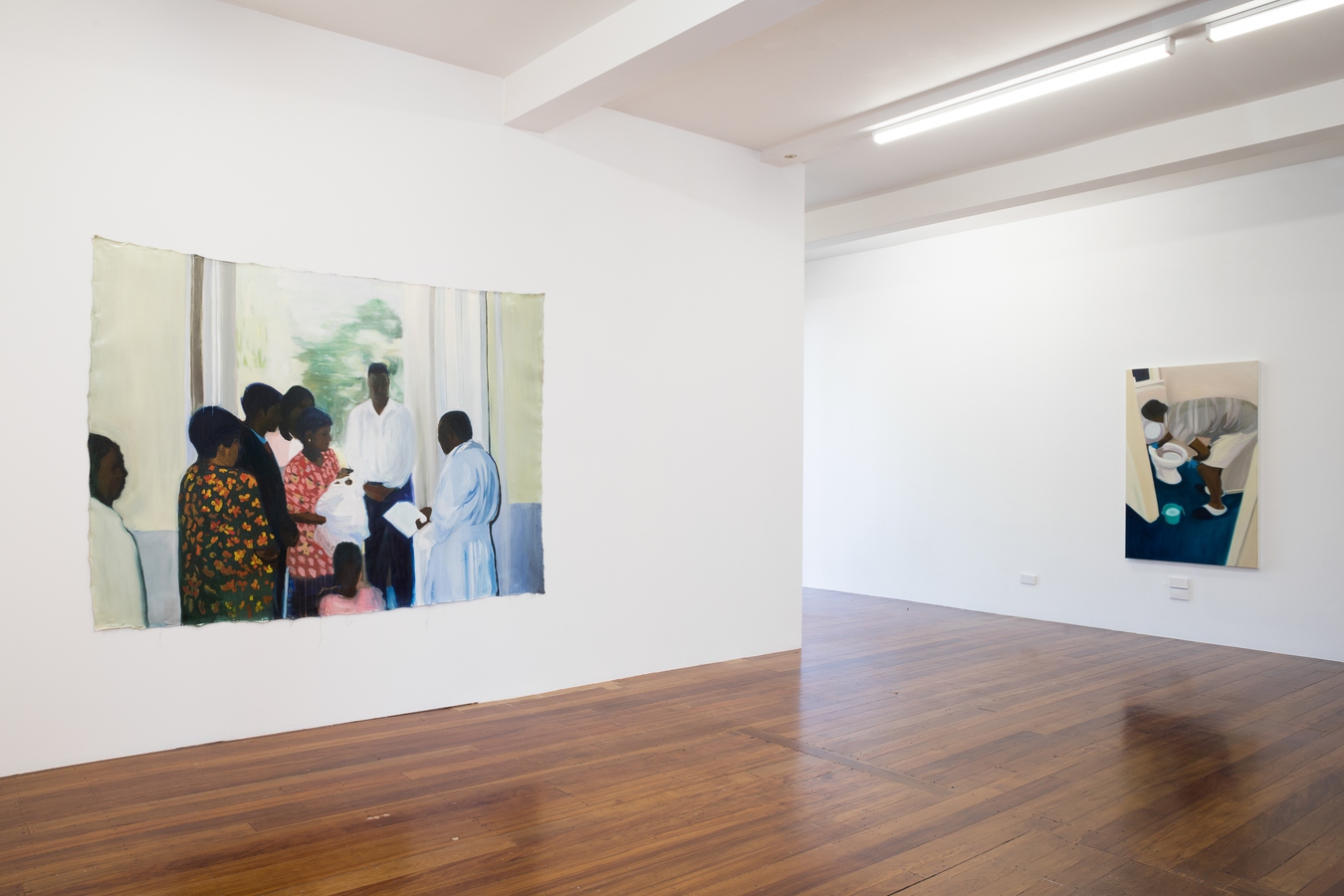 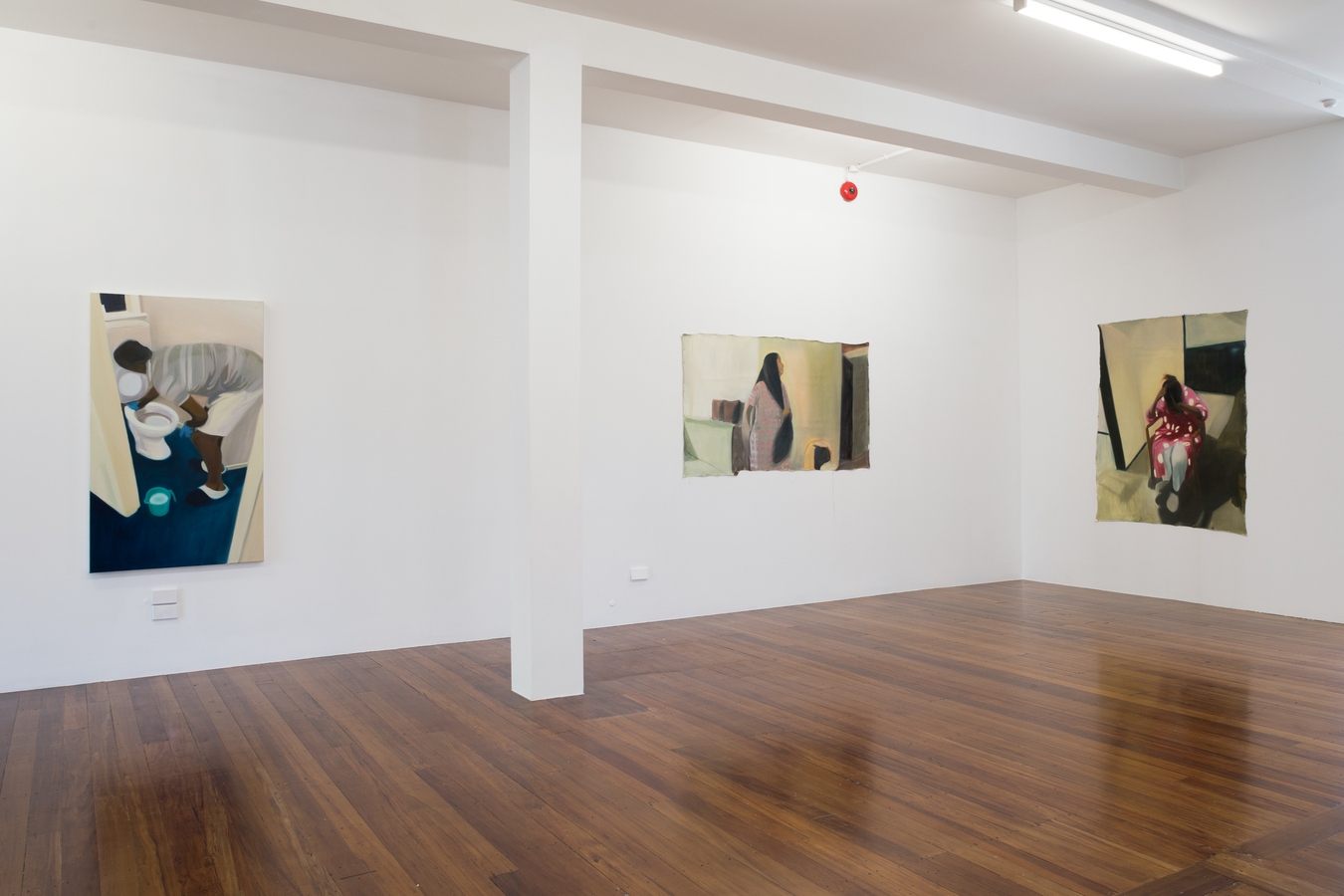 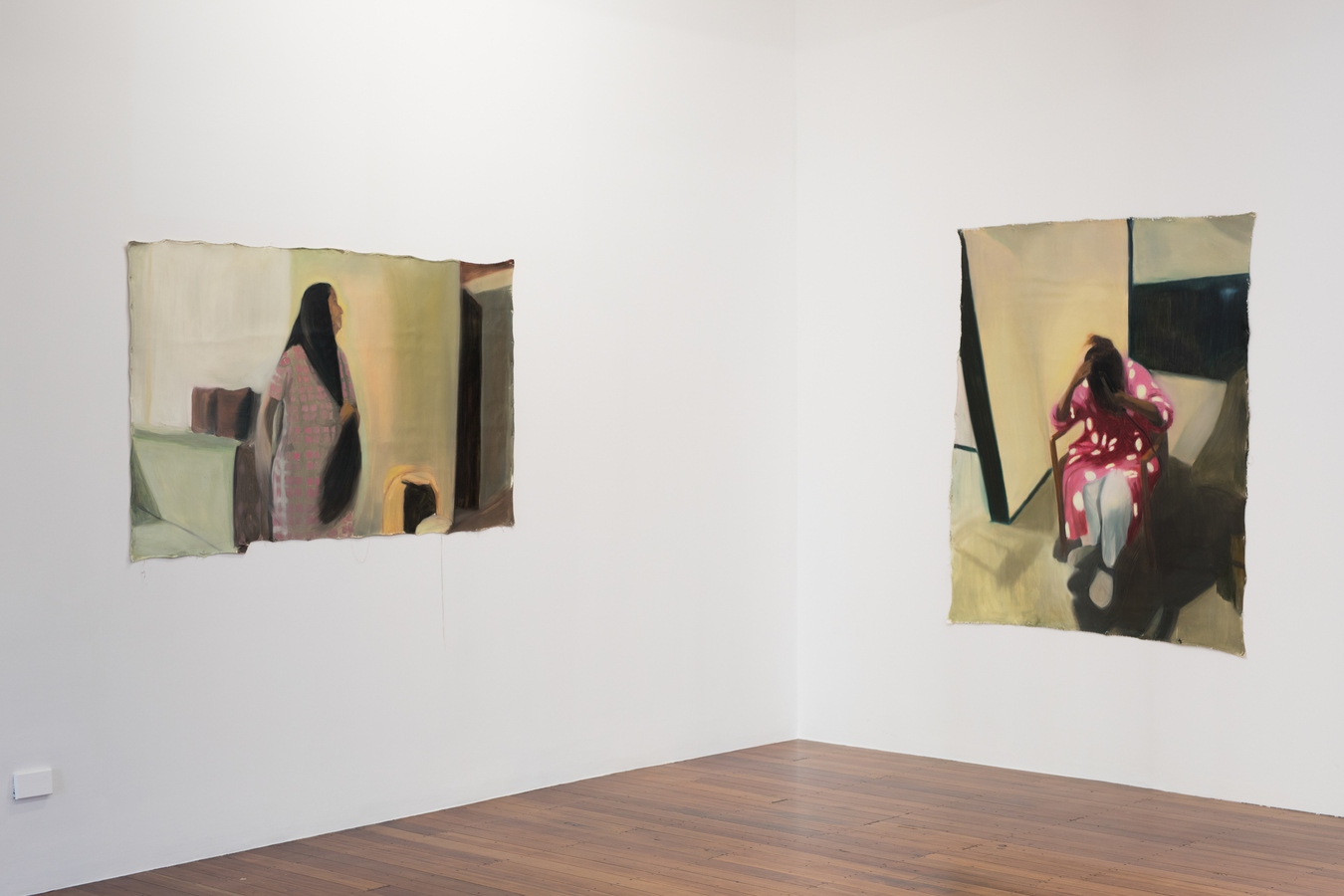 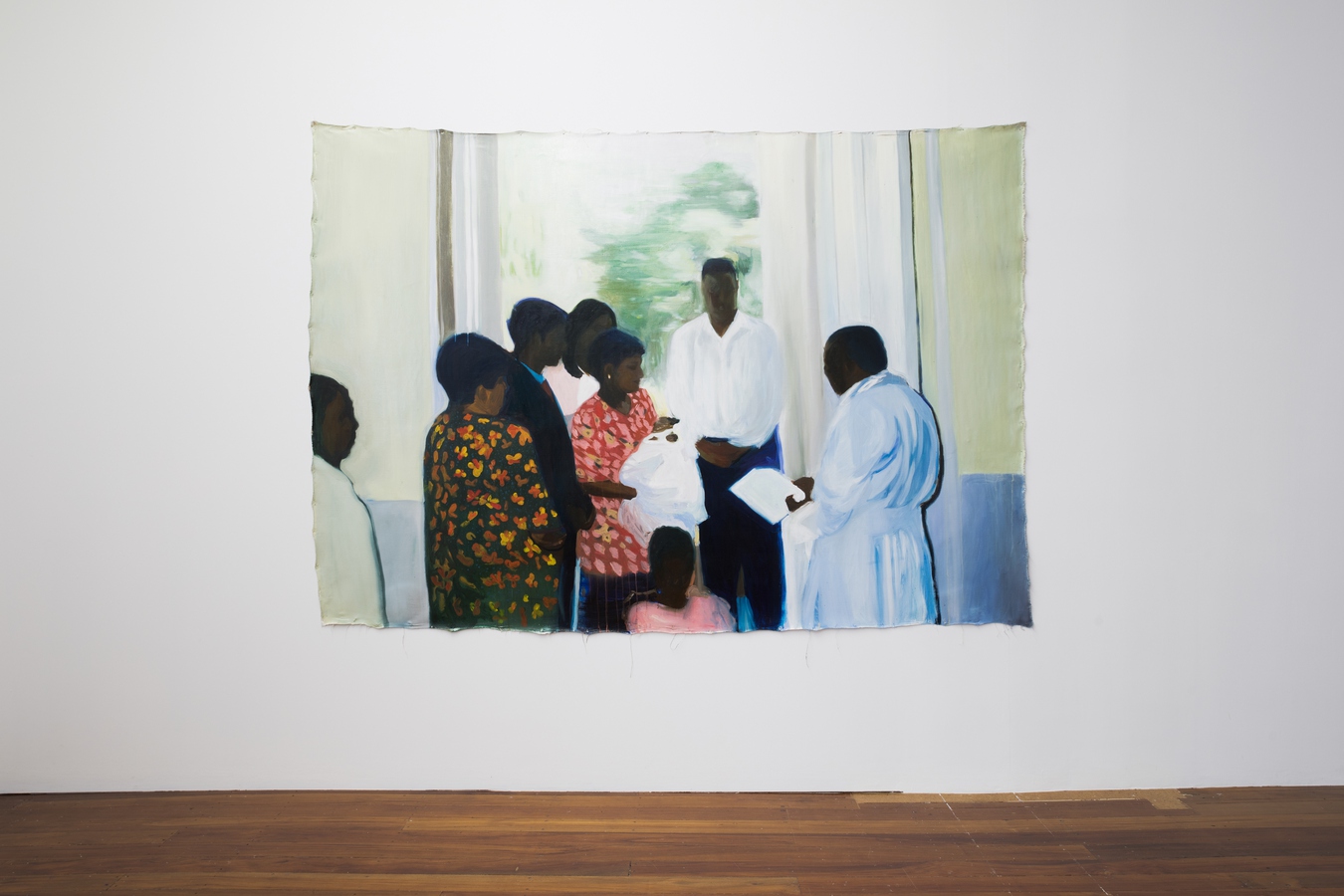 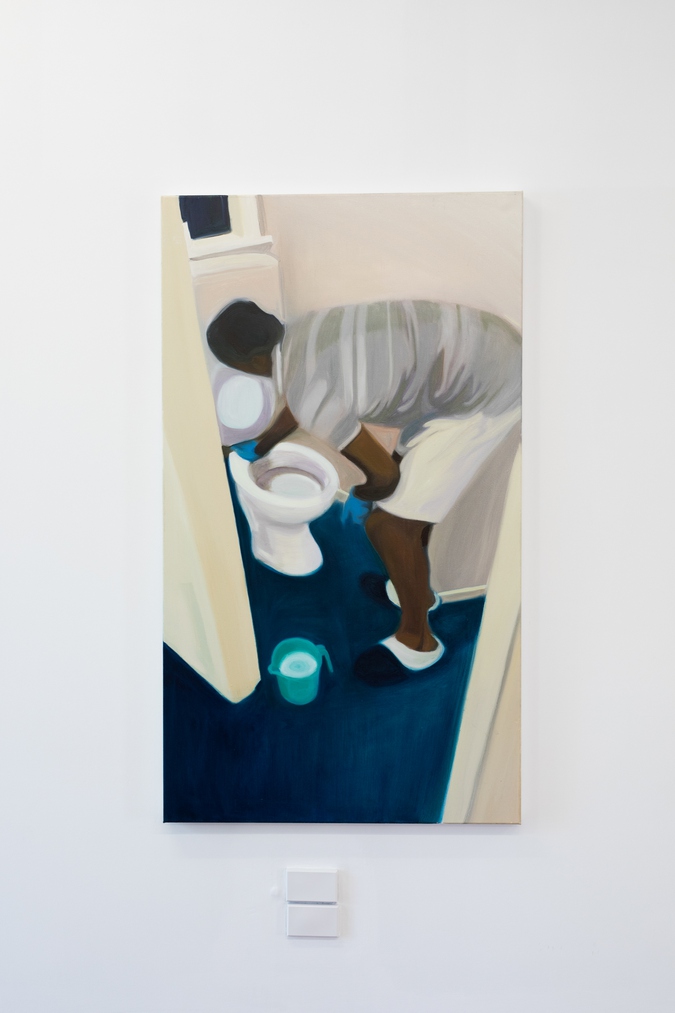 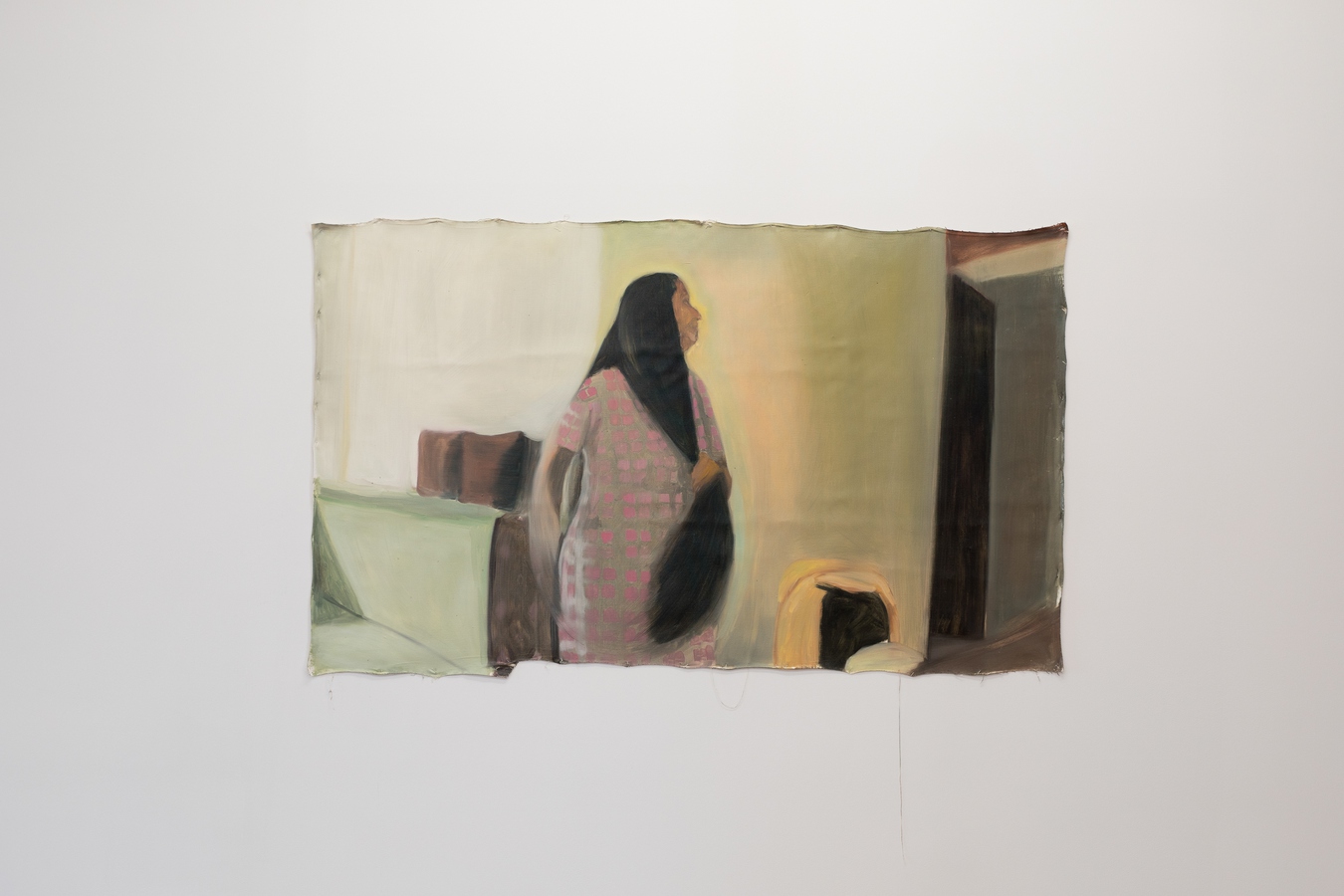 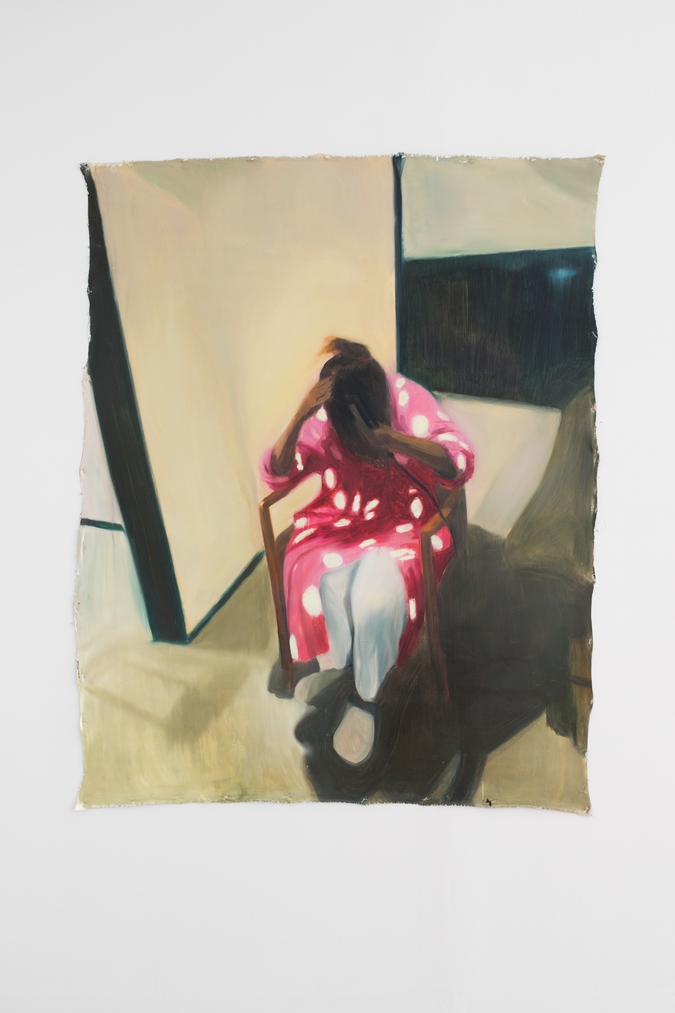 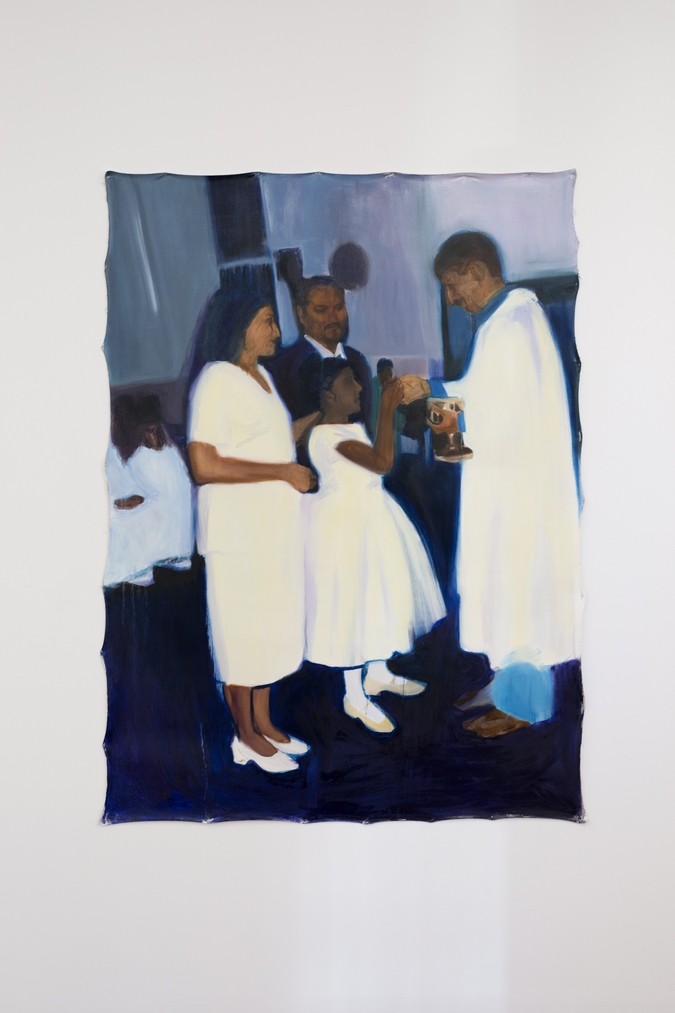 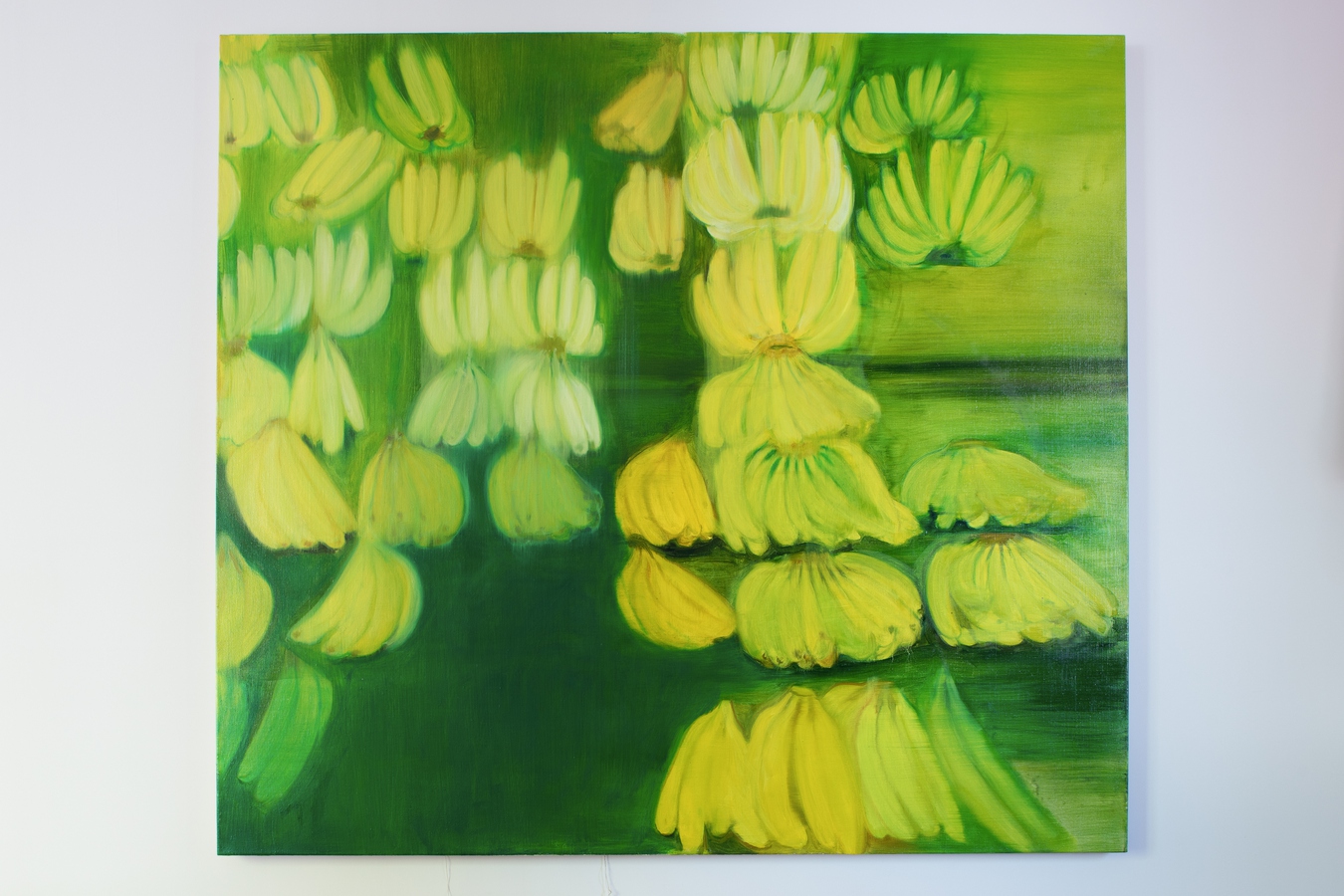 the way things are by Tāmaki-based painter brunelle dias compiles images of intimate moments held within family albums and personal documentation. In these figurative paintings dias uses touch, colour and pattern to depict her external world, embedding this with the complex emotional and psychological relationships with, and between, her subjects. Gathering together multiple times and locations, dias’ work disrupts fixed ideas of identity, affiliation, and home. The exhibition gestures towards the notion of the self as formed, and constantly re-formed, through accumulated and inherited traces of history.

the way things are includes a series of large, unstretched canvases. Tacked across the gallery walls, these paintings appear skin-like, their raw edges uncontained. Significant life events such as dias’ baptism and her sister’s first holy communion coexist alongside paintings of mundane activities: her brother cleaning the toilet or her mother straightening her hair. The juxtaposition of acts of collective familial identification with images of daily routines raises a recurring question in this body of work. What events or processes constitute one’s being?

In mango season, 2022, dias reproduces a photograph of her baptism. This is the largest of the canvases and the artist appears within as an infant surrounded by her whanaunga in a church in Mumbai. The cold flash of the camera is imprinted in the thick outline of the figures shadowed against a cream-coloured wall, placing the scene within a specific temporal past and heightening the tableaux-like effect of the composition. The vibrant patterns of the women’s shirts, which dias has rendered using daubs of orange, yellow and pink, break across the muted and blurry composition, this visual drama decentering the subject of the canvas. In this work, dias invites us into a private, exalted moment, yet this moment is also held at a distance. The face of each figure is obscured, half-turned away from the viewer so that we peer into the scene as observers, left to speculate on what relationship these figures have to one another, how the women are connected, what time has made of each one. The scale of the work is monumental; the scene envelops the viewer’s field of vision, at the same time signalling itself as a potent and immutable presence within the artist’s interior landscape.

Touch and pattern recur in gloria, inhale, exhale, 2022. This painting shows the artist’s adopted grandmother in Mumbai captured during a visit to India in 2018, more than 20 years after the event depicted in mango season. In gloria, inhale, exhale, the figure wears a patterned dress composed of short pink strokes that seem to float above the body as surface abstraction. With her right hand, she brushes her hair, the vertical motion mirrored in the painter’s long brush strokes, repeated until the black paint blurs into an indistinct mass. For dias, there is an equivalence between loving touch and beloved subject. In this painting, the artist seems to be caressing her grandmother, tending to her image in a way that she is unable to in real life. The arm’s swift motion, caught in the camera’s slow shutter, dissolves into the background, so that the action of brushing obliterates the subject.

Other domestic and quotidian scenes complicate a straightforward biographical reading. In Part 1: bread, butter, marmalade, 2022, dias’ mother sits inside an interior space. The strong downwards light tells us it is night time and dias’ mother is bent forward straightening her hair. Her dressing gown is a slick of jam spread across an ivory-smooth surface, her slipper a rounded wedge emerging from the dark. The scene appears unguarded, ordinary, drawn from the artist’s immediate surroundings—Part 1: bread, butter, marmalade takes place in dias’ home in Tāmaki Makaurau—in which the figure is absorbed in her private moment. However, in this image the artist also acts as a voyeur: the paintings’ vertiginous perspective gives away its discrete smartphone origins. dias is able to intrude on her subject’s solitude through the closeness of their relationship. In this sense the ‘candid’ image could be seen as staged in a similar manner to the family photos. In transforming photography into painting—both family album prints and digital phone snaps—dias partakes in a process of tending and safekeeping, revealing an archival longing.

In the fragmentary text, No Archive Will Restore You, writer Julietta Singh ruminates on past encounters with bodies that have impressed themselves onto her own. Responding to Antonio Gramsci’s call to compile an inventory of historical traces, Singh recounts her own moments of becoming: a near-miss that binds her and her potential assailant together in a moment of disaster; her desire to consume a piece of her mother as both an act of love and preservation; and her own subconscious and animal-like articulations of pain and loss. These historic traces, extracted from the detritus of the everyday, are understood as formative within the author’s own narrative. Collectively, they form an unstable corporeal archive, whether incidental, self-inflicted, unwelcome, fabricated, or longed for. At its centre is the recognition that the body is not singular and finite but composed of intrusion and affects and feelings.

In a memorable passage, Singh describes a childhood event in which her mother heroically welds a kitchen knife against a giant piece of shit that clogs the toilet. This finds its parallel in dias’ pakuranga highs, 2022, where dias’ brother bends over to clean a toilet bowl. At her brother’s feet sits a plastic measuring jug commonly used in squat toilets; his gloved hands insinuated through soft squiggles of cobalt blue paint. In committing these moments to canvas—the weird, the banal, the faecal, the seemingly inconsequential—dias seems to be building a repertoire of known images and gestures: endlessly repeated actions that accumulate and lodge themselves within our understanding of who we are over time. Importantly, these actions are drawn from the artist’s home environment, politicising these spaces by showing that plural and temporally dissonant notions of home and belonging can coexist.

In dias’ paintings, identity is permeable: this can be observed through the raw edges of dias’ canvases or the arm that obliterates through touch. In gathering together both public and private moments, dias’ work seems to propose an alternative for thinking through diasporic experiences in Aotearoa - a self-identification that is fragmentary, determinedly specific and entangled in time. In choosing to paint her own family and loved ones, dias presents the audience with Christian Indian bodies, South Asian bodies, diasporic bodies, engaged in everyday activities that disrupt easily recognisable representations of what it is to be other in Aotearoa. Embedded throughout the works are clues that situate dias within a specific migrant context: as a daughter in the wake of Portuguese Catholic and British colonialism, rising Hindu nationalism, and tauiwi agitation. For dias, tending to these historic traces is also an act of love, providing a way for navigating complex notions of identity and affiliation.

brunelle dias is a painter based in Tāmaki Makaurau. She completed her Masters of Visual Art at AUT, School of Art and Design, in 2021. She is interested in the intimacy between figure and ground and the interconnection between past and present. Recent exhibitions include The Local Migrant at RM Gallery, Tāmaki Makaurau; Idyll at Page Galleries, Te Whanganui-A-Tara; and a revisit of introspective fieldworks: the everyday in flux at Nathan Homestead, Tāmaki Makaurau, all 2022.

the way things are Roomsheet (pdf)

Audio described tour of the way things are exhibition 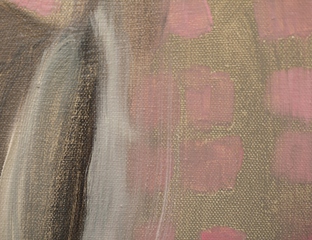