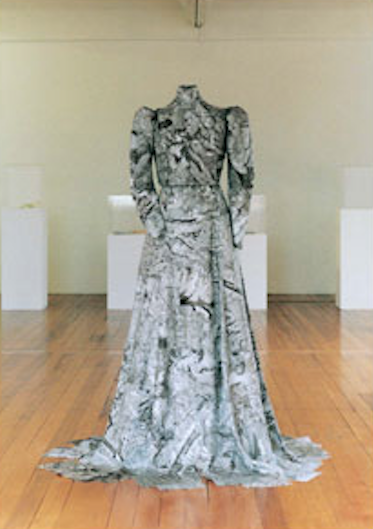 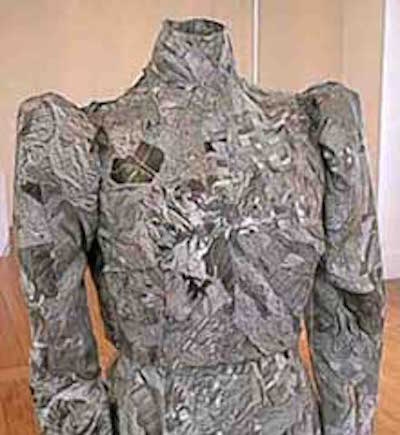 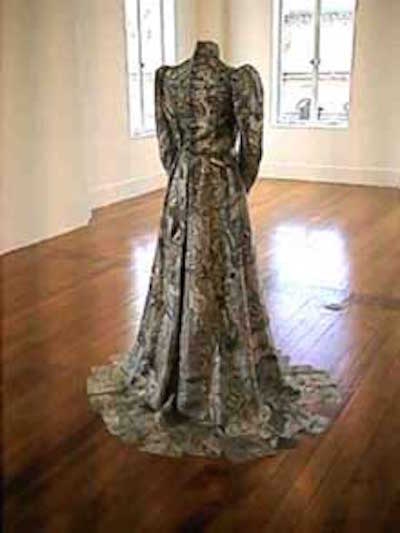 Outstanding New Zealand artist Ruth Watson, now living in Sydney, has had a long-term fascination with the history, politics and aesthetics of mapping and map making, with particular reference to the history of Western conquests in land ownership. More than just geographical signposts, the maps in Watson’s work also chart an emotionally charged journey, stretched and molded as they are into heart-like shapes and rendered beautiful beyond use.

Returning to Christchurch for Without Parachute, Watson is here "without map" as well, instead drawing on aerial photographs of the Canterbury Plains to site this work. Reproduced, not on paper or on screen, but printed onto a delicate silken dress, we see a birds eye view of quilted paddocks and braided rivers, between folds of cloth, and shaped to the wearer’s body. In addition, Watson has created tiny heartshaped jewels to accompany this outfit, inspired by items in the collection of Airforce World Museum in Wigram, pendants made from the Perspex windscreens of crashed planes by NZ POWs in the Pacific during World War 2.

A project developed in partnership with the Airforce World, the Wigram airbase museum, Ruth Watson developed the work in Without Parachute while artist in residence at the School of Fine Arts, Canterbury University, in 2001. Without Parachute is a linking exhibition with Let The Heart Take Flight, a historical exhibition held at Airforce World as a part of the Romance Festival 2002.

Map of the Human Heart
The Listener, March, 2002
Blundell, Sally.
about Without a parachute and Let the heart take flight (Air Force World)

WITHOUT PARACHUTE : Ruth Watson
Essay by Sarah Farrar
In The Physics Room Annual 2002