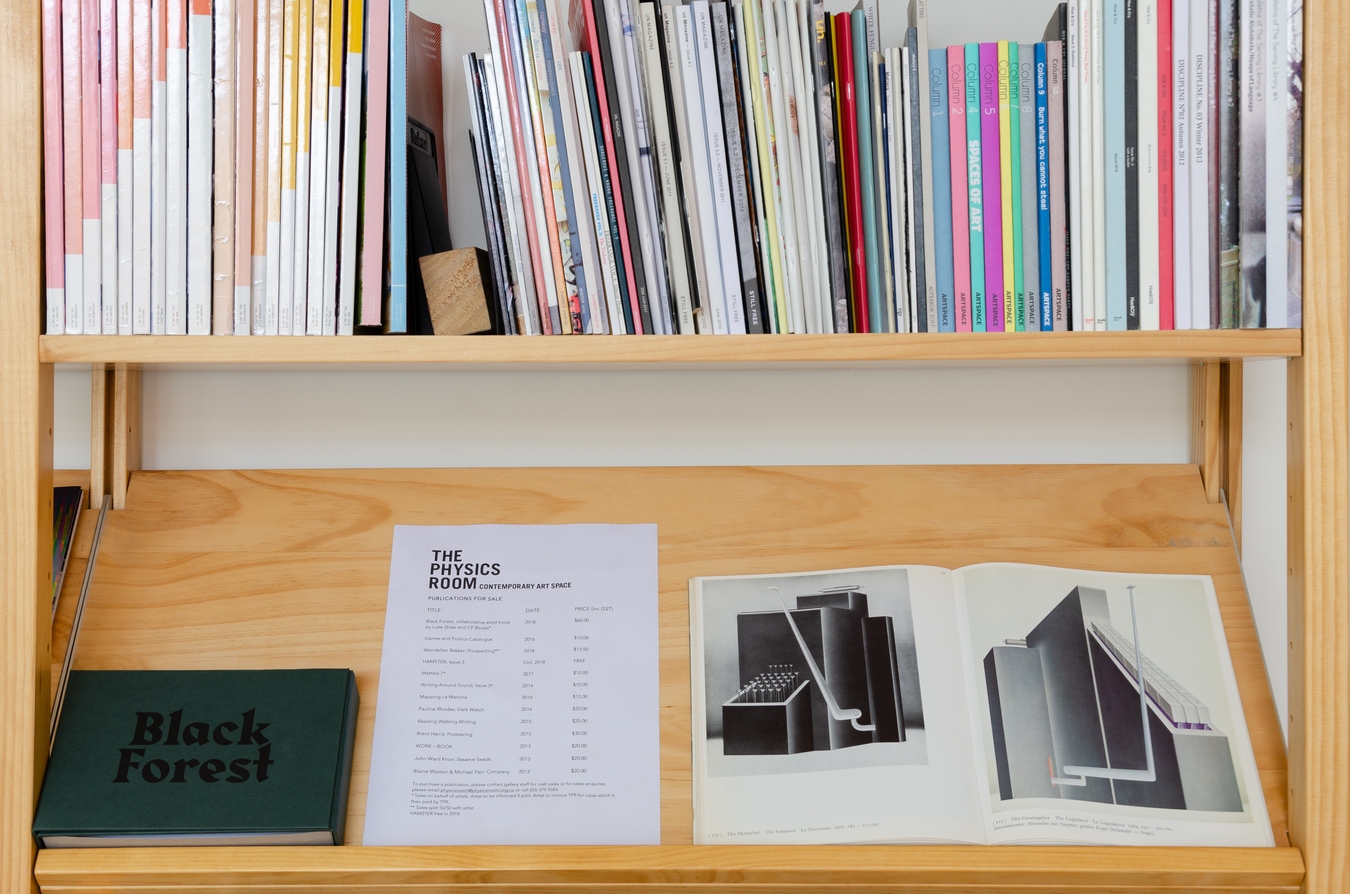 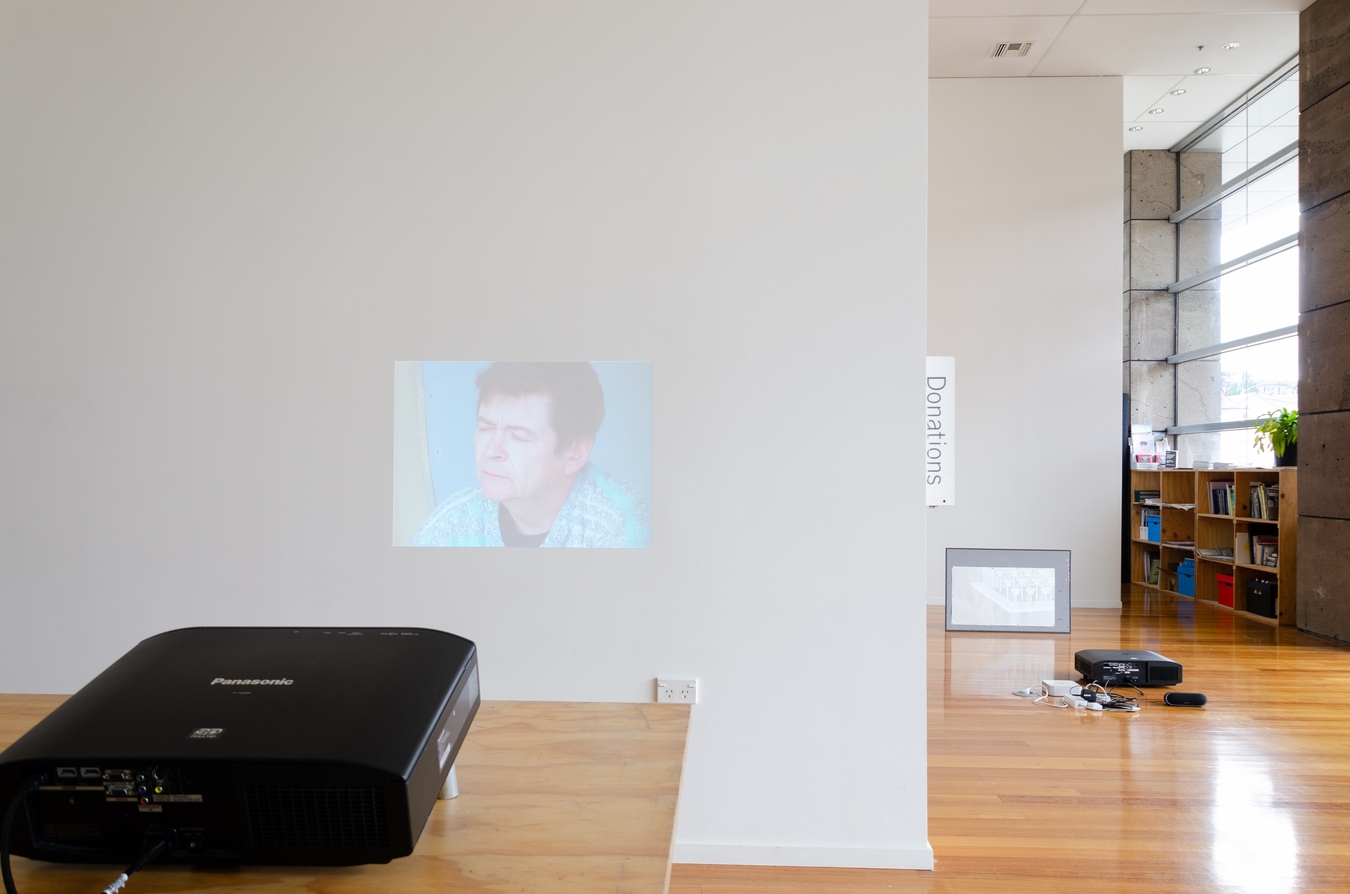 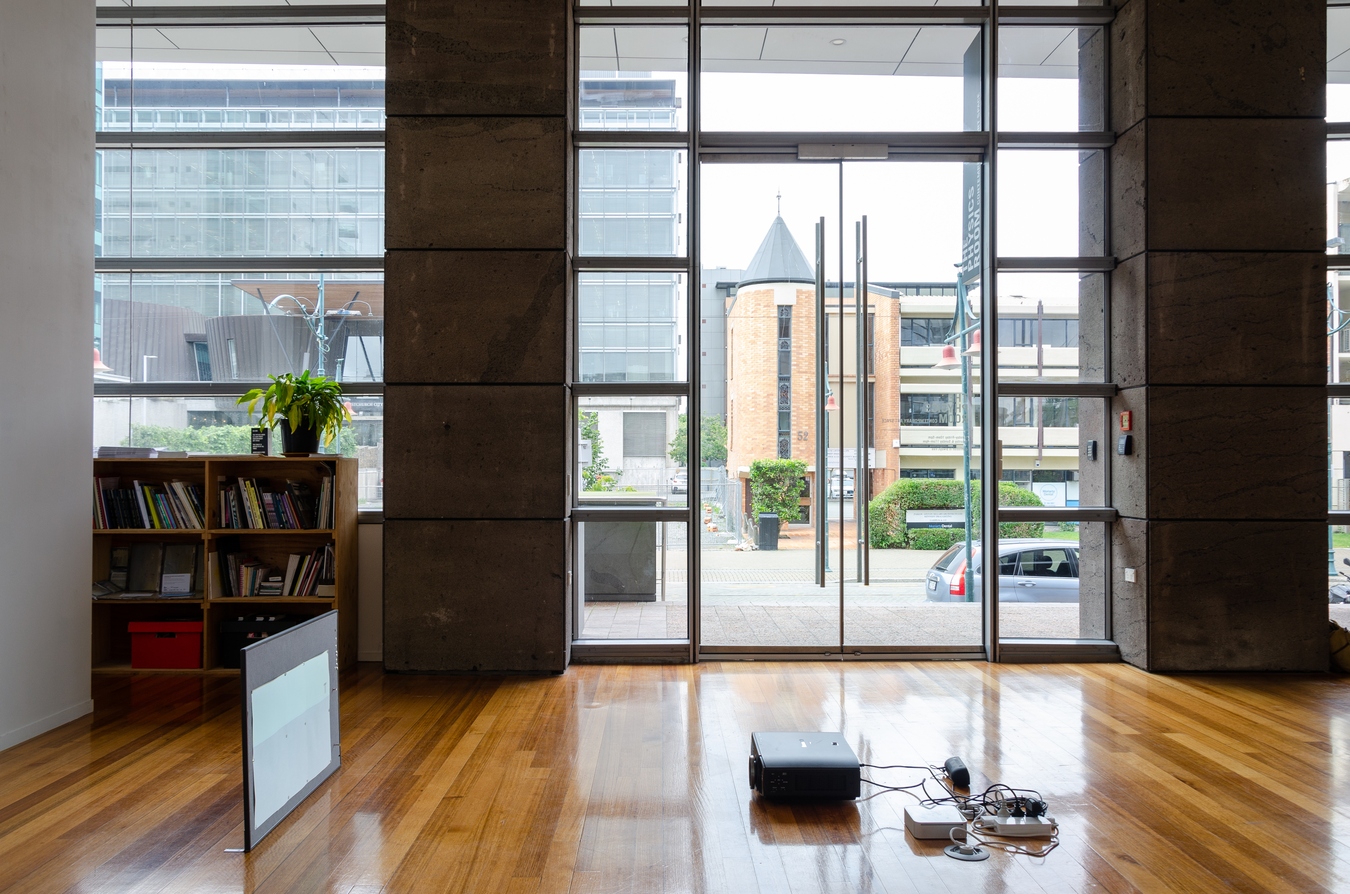 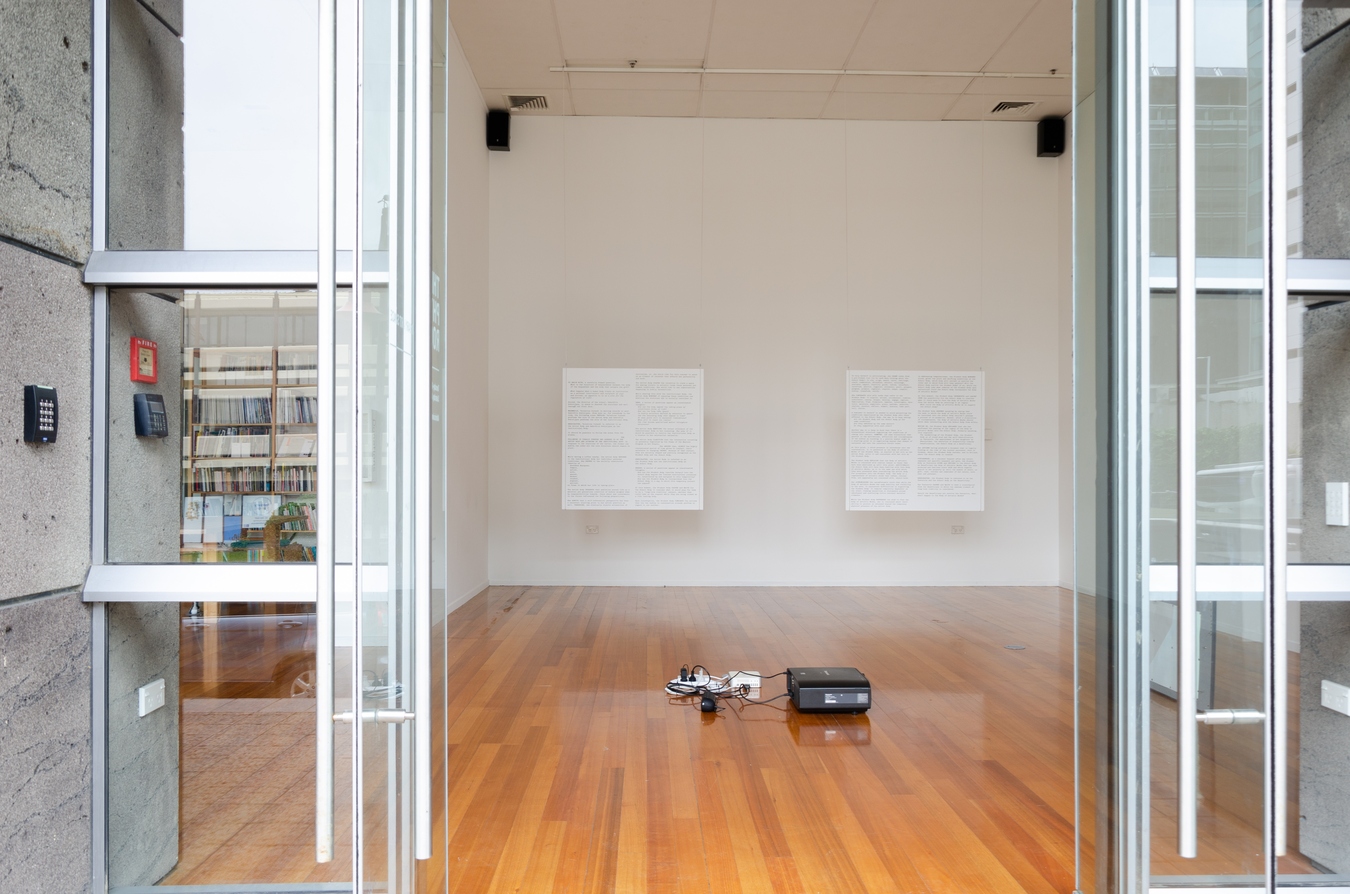 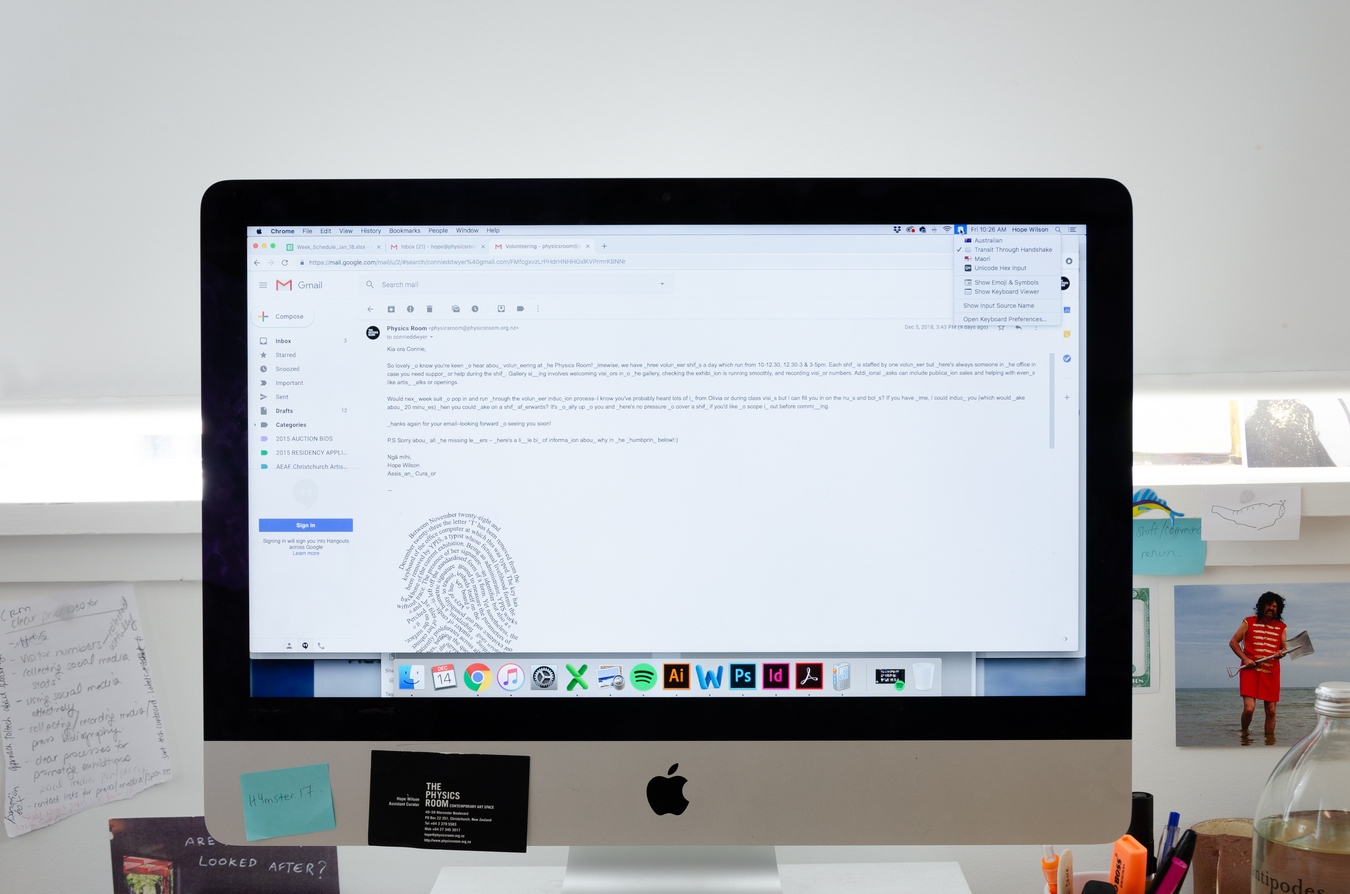 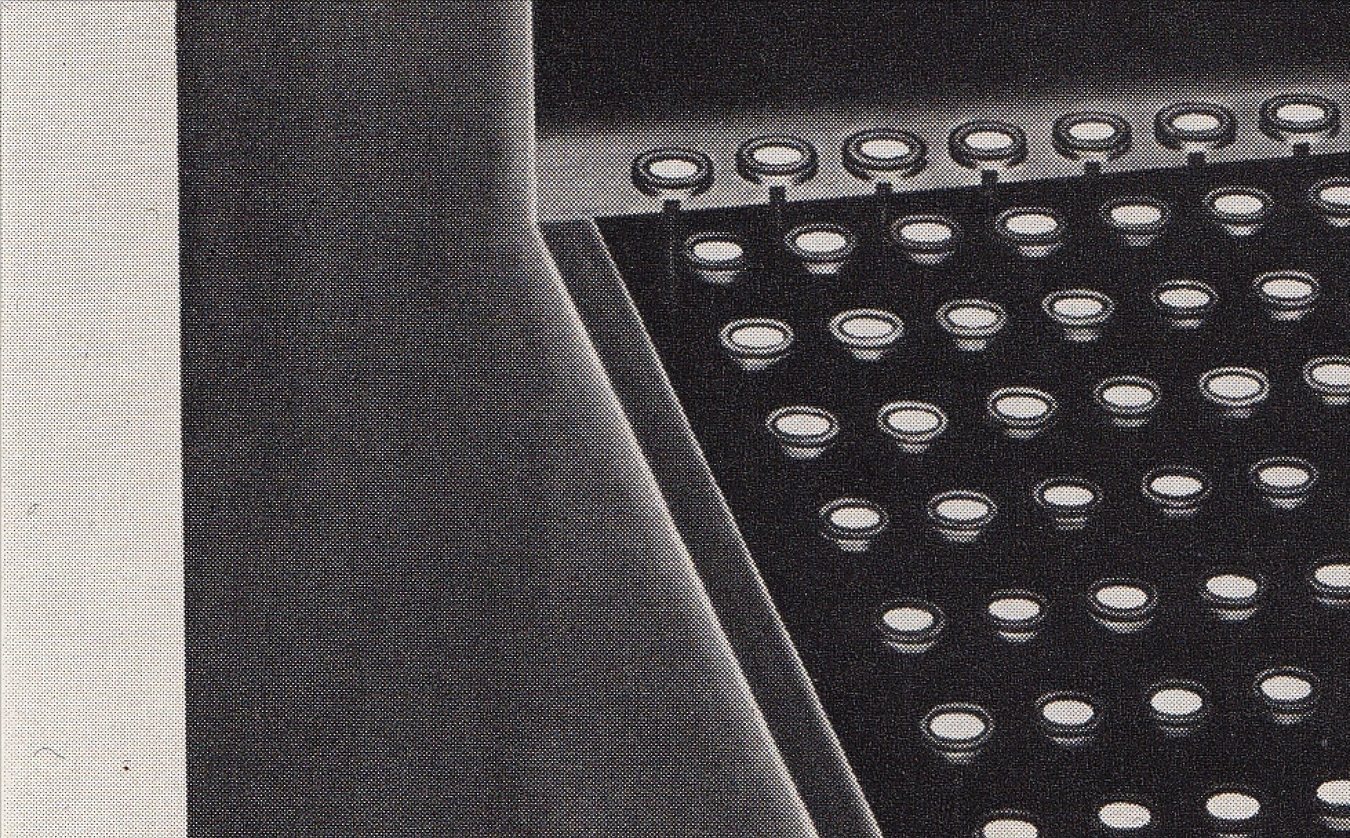 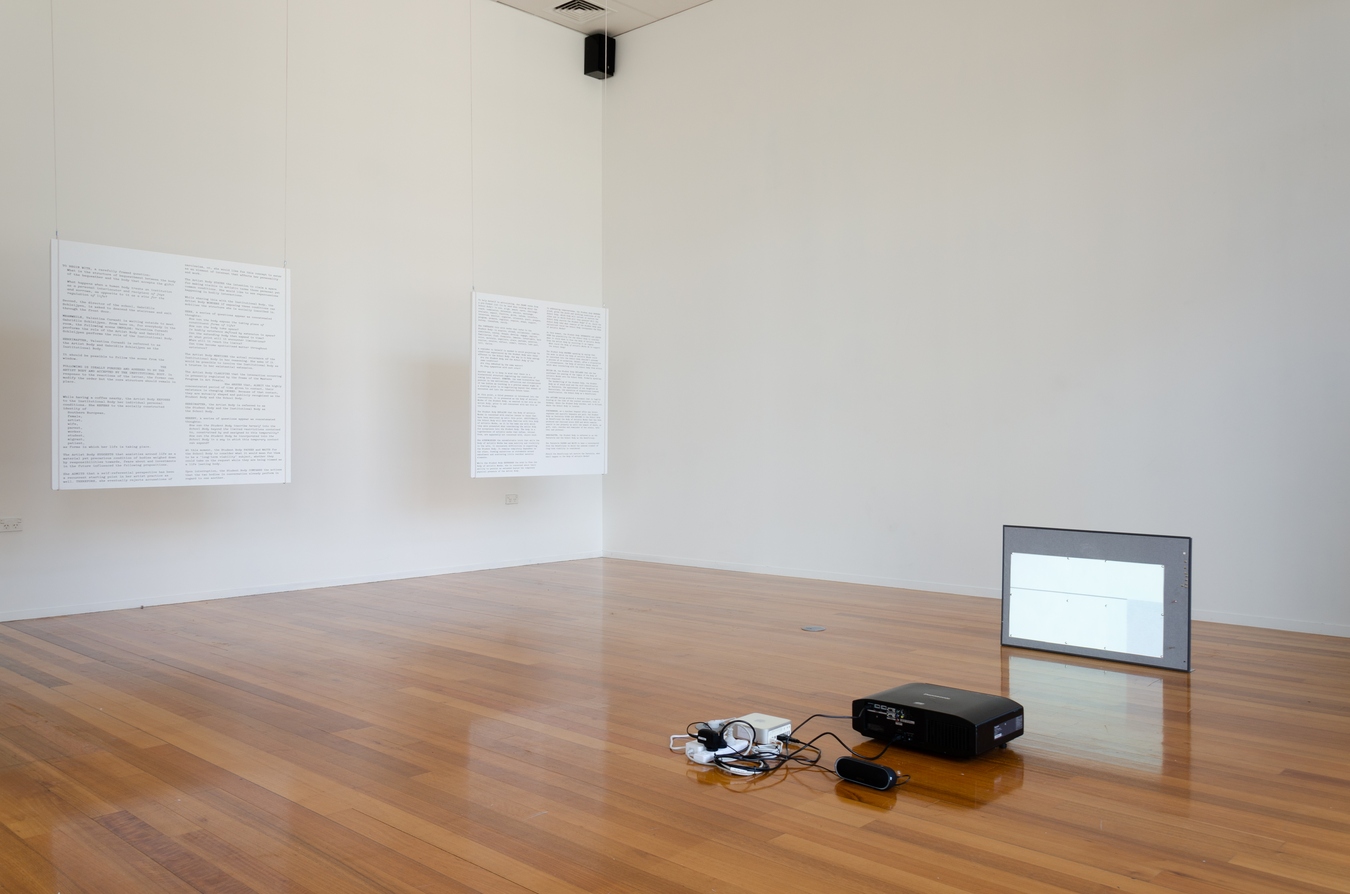 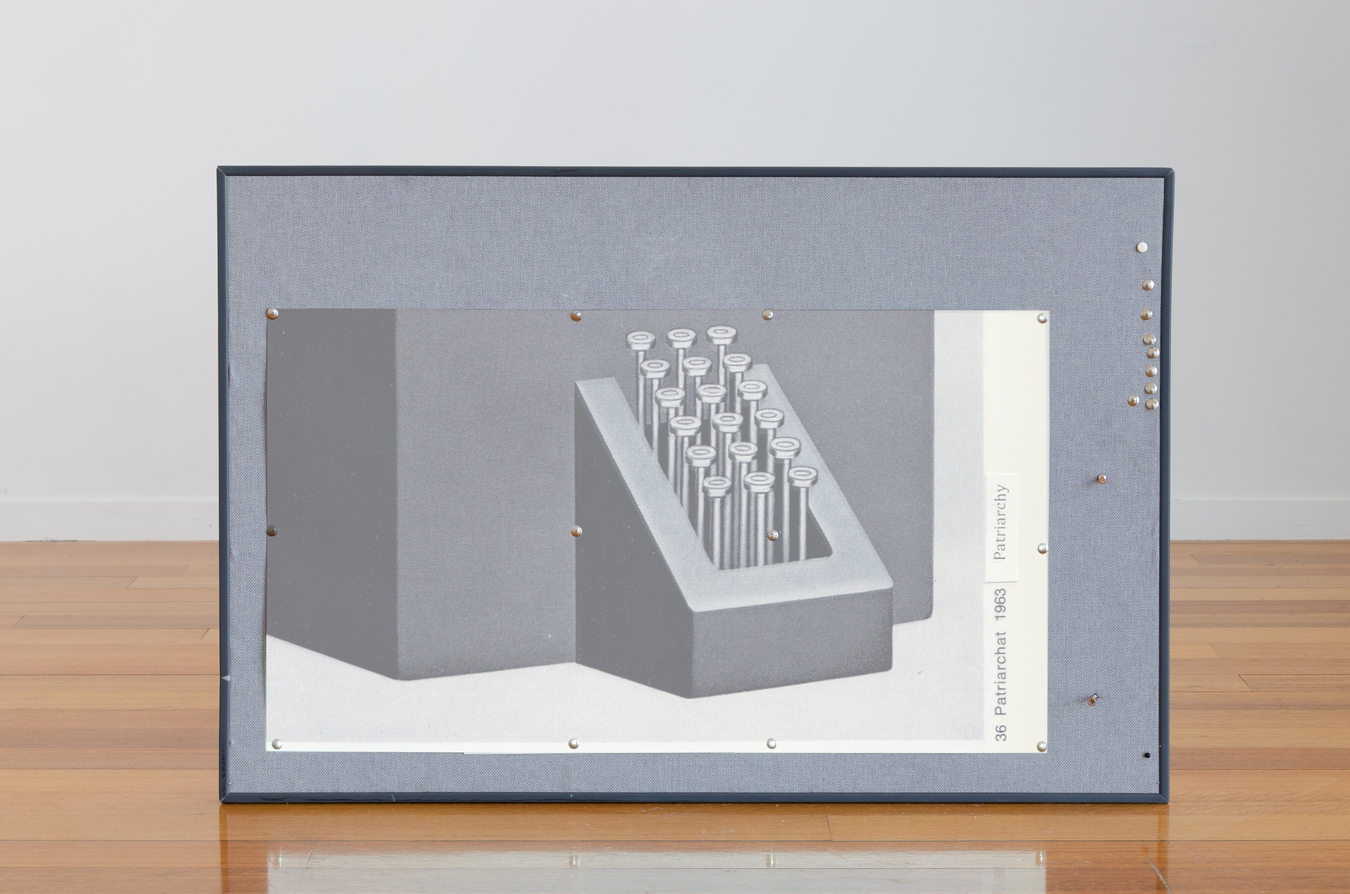 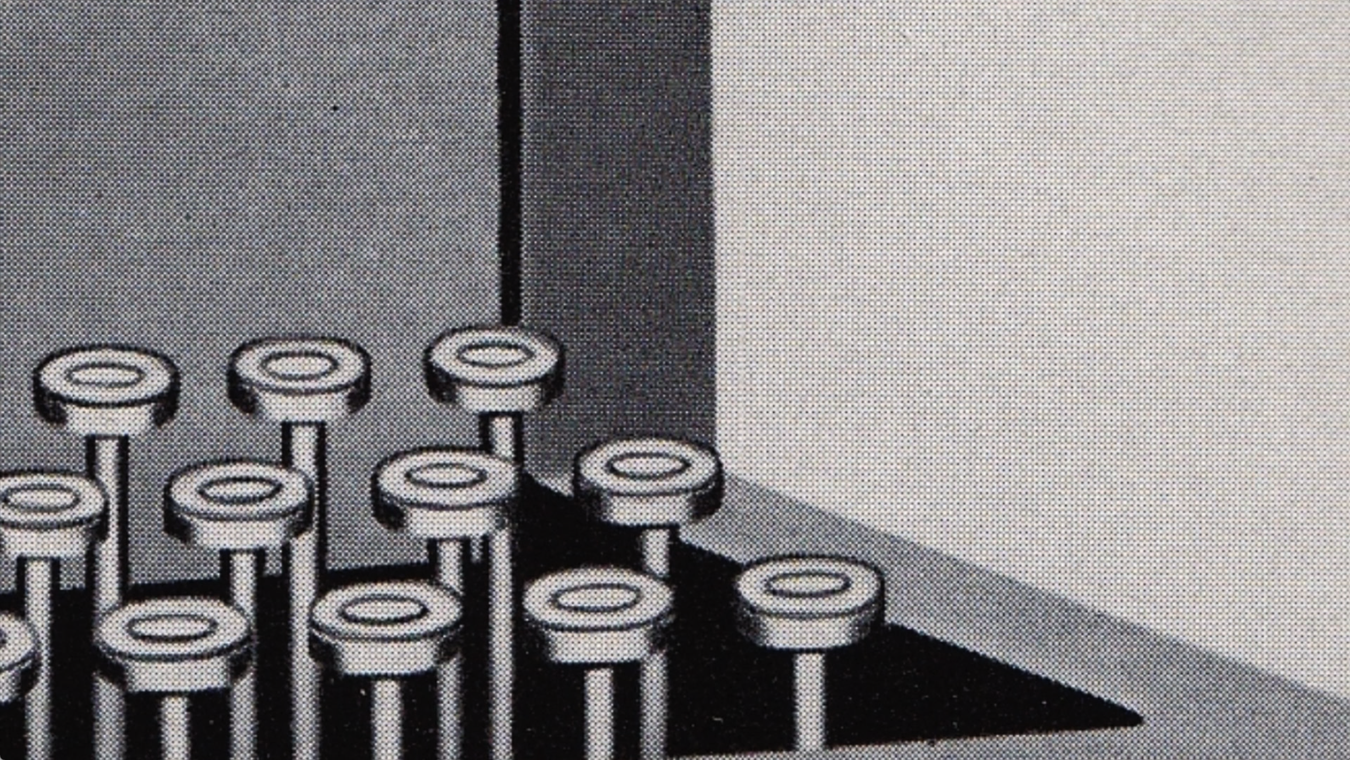 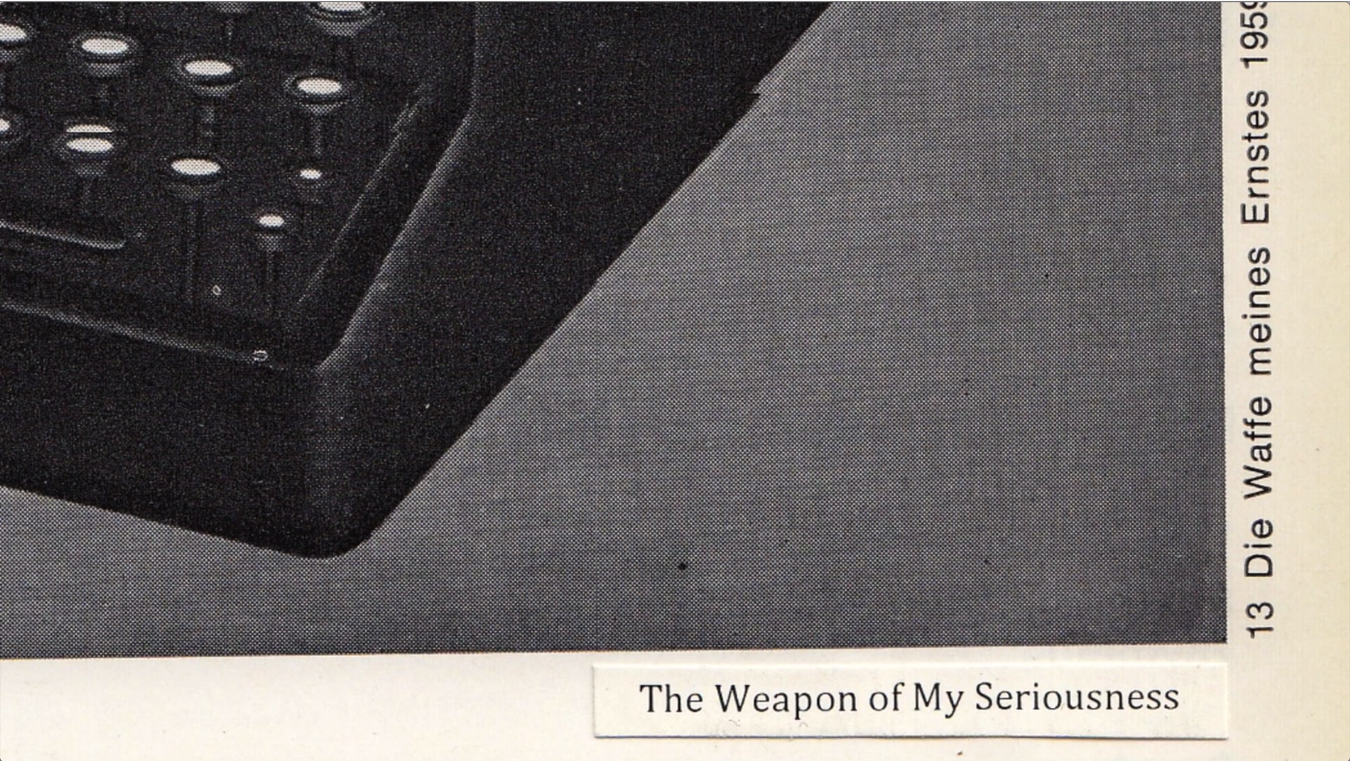 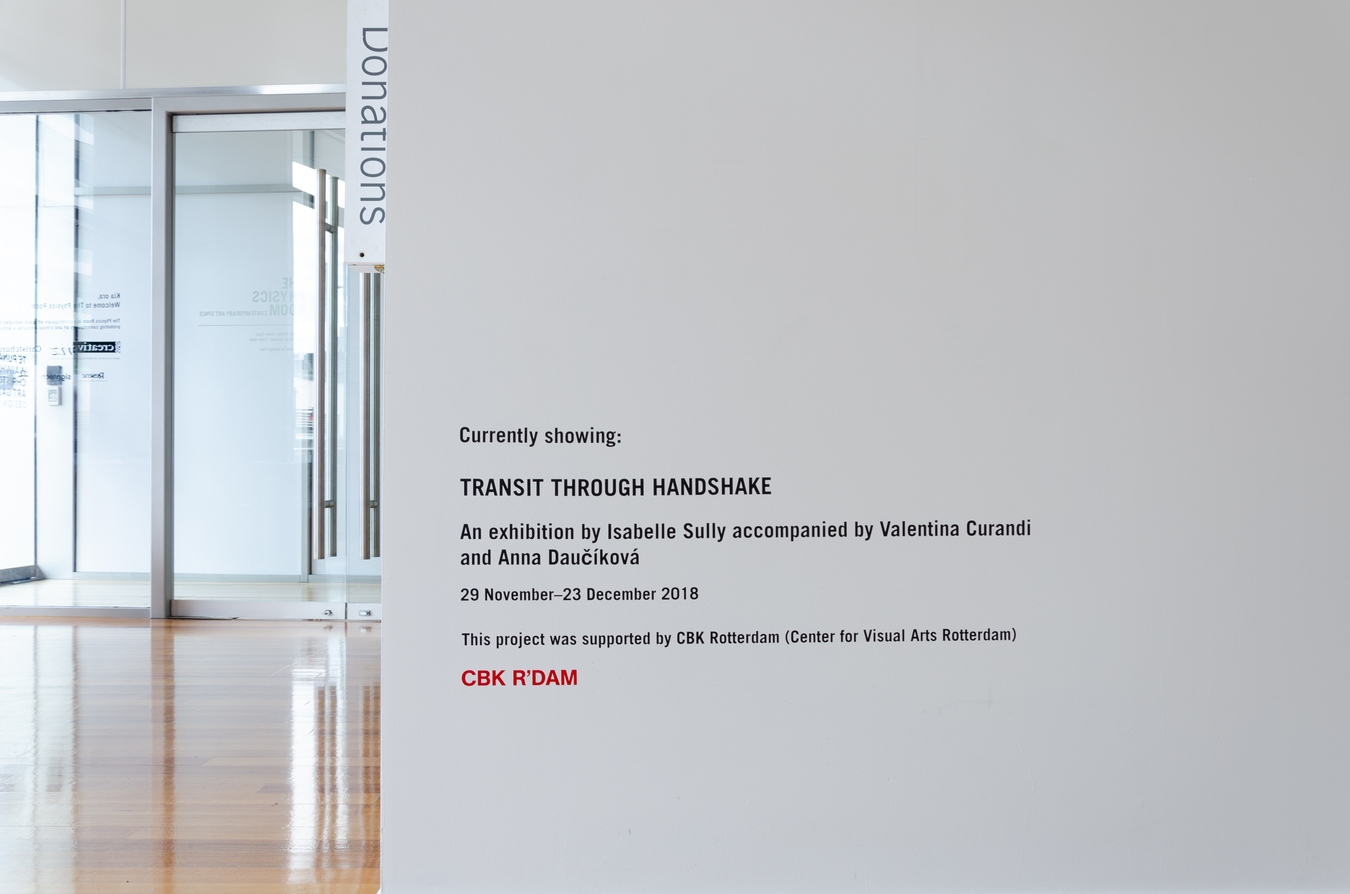 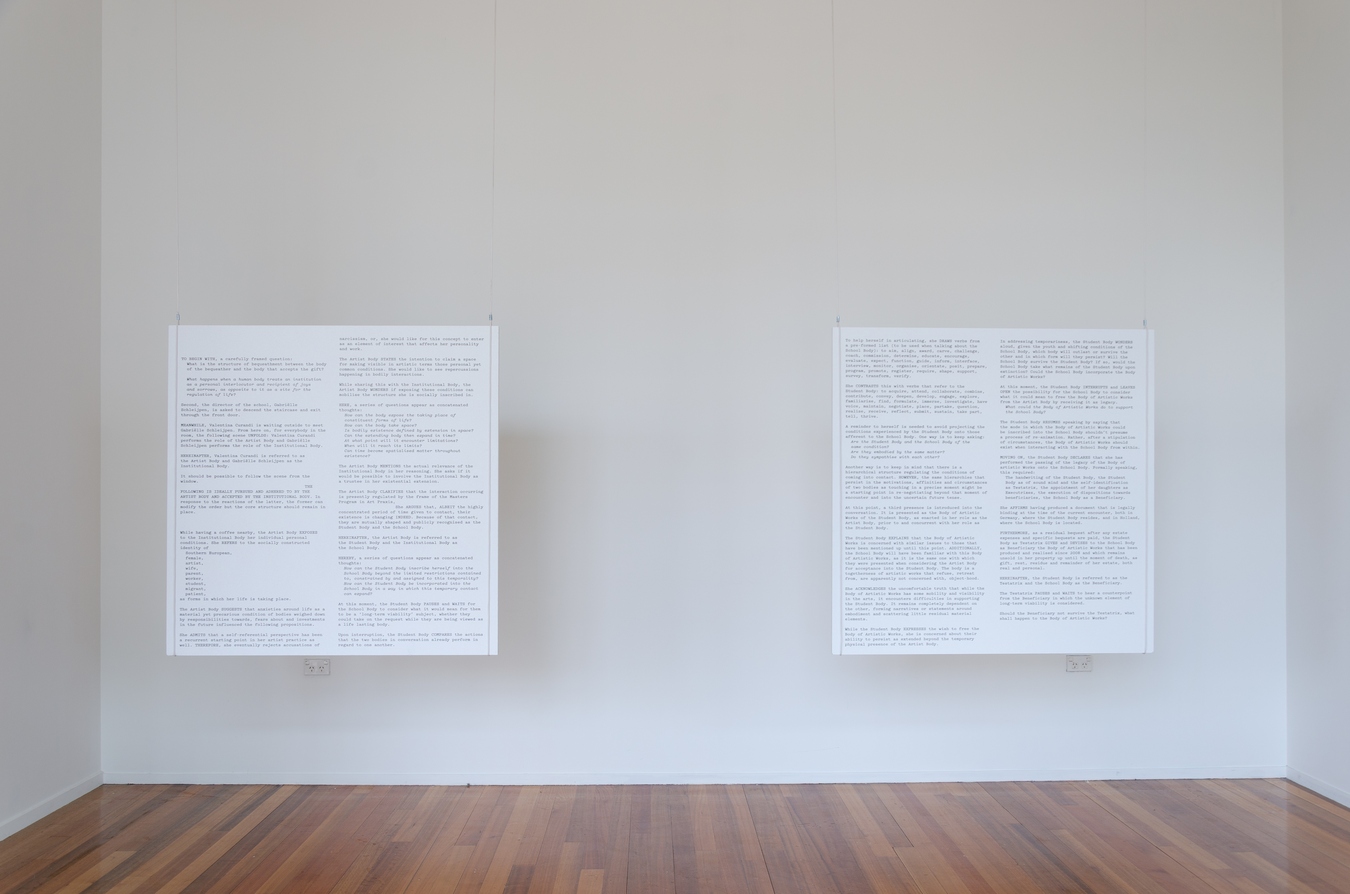 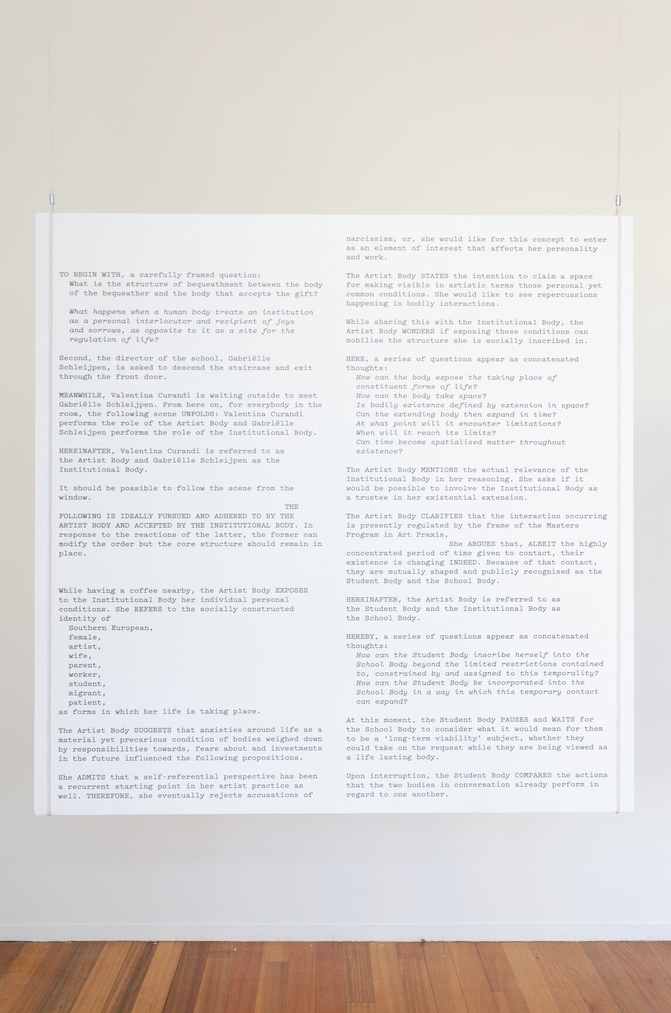 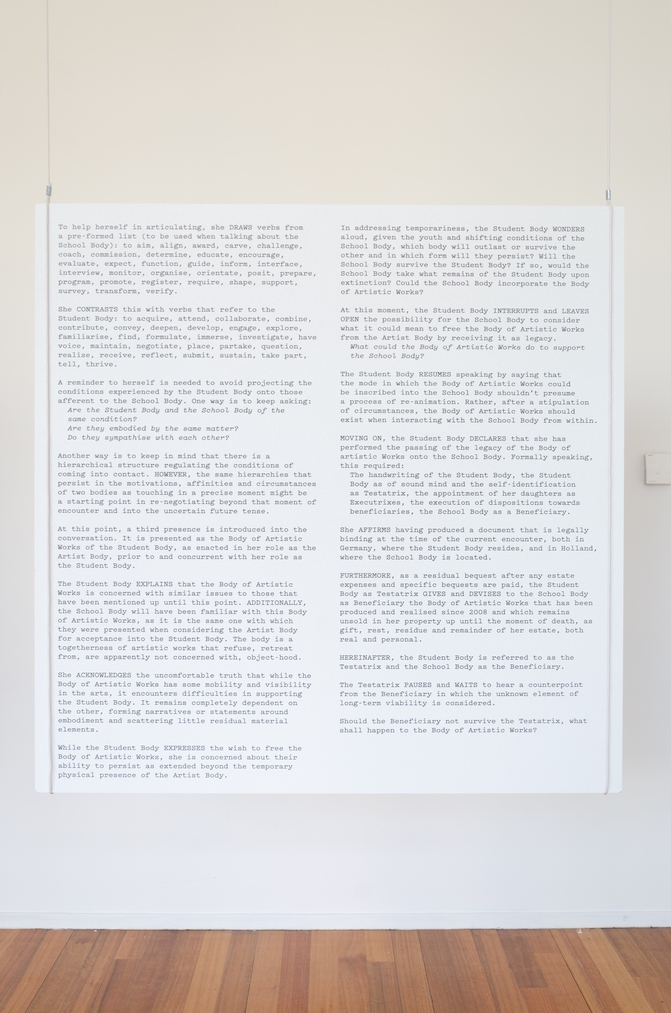 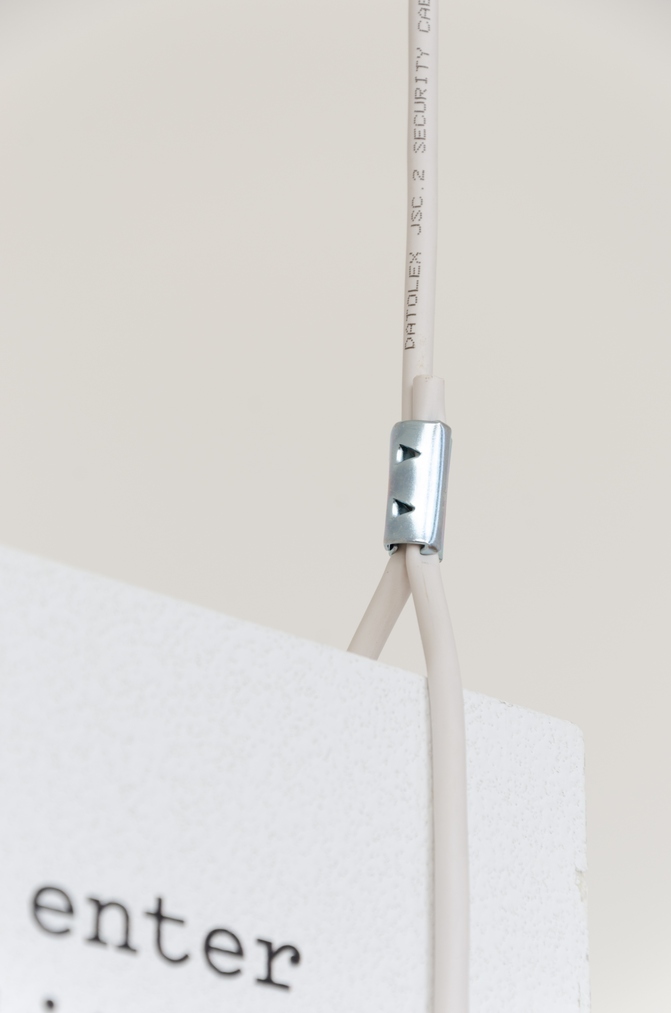 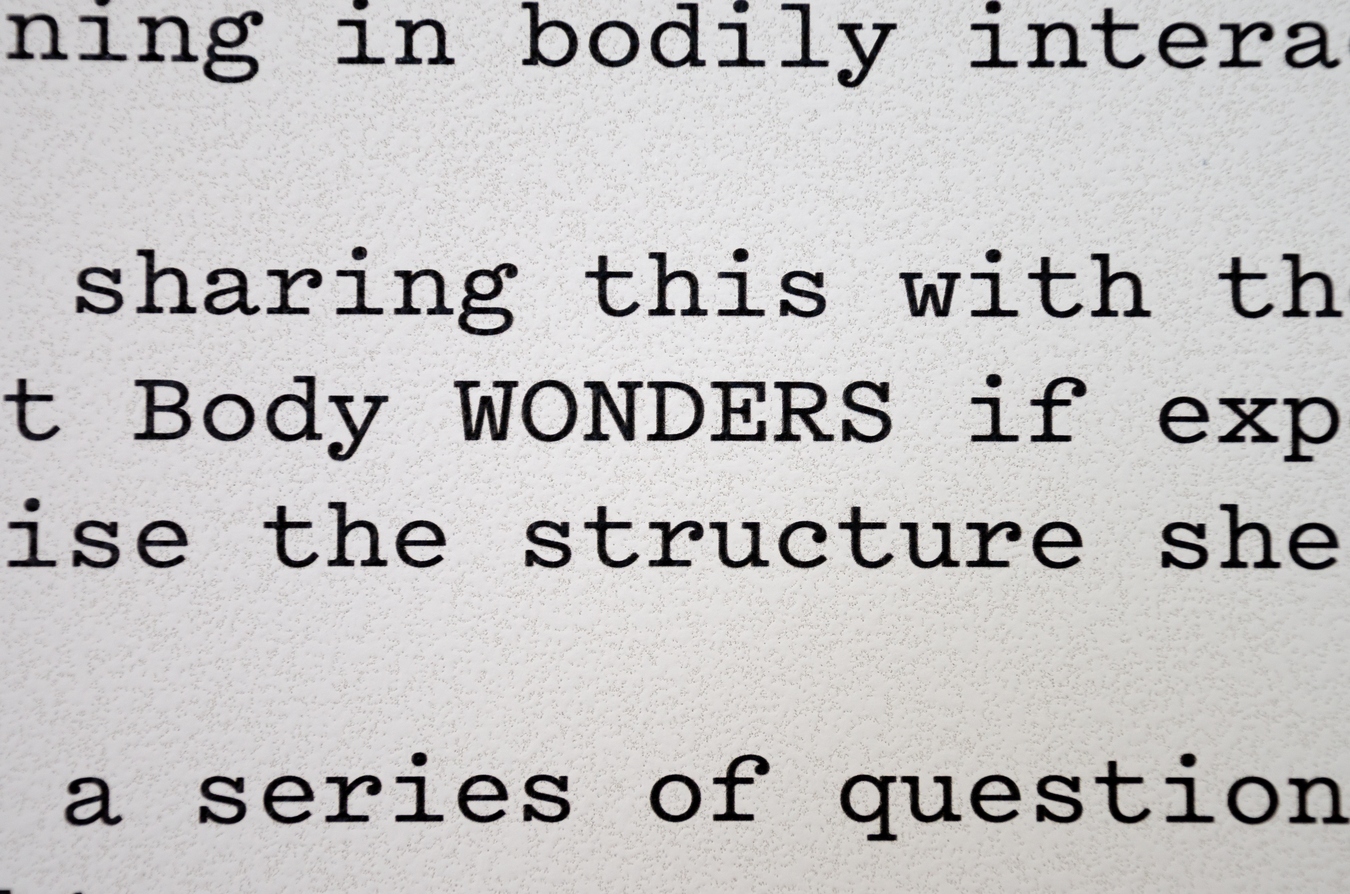 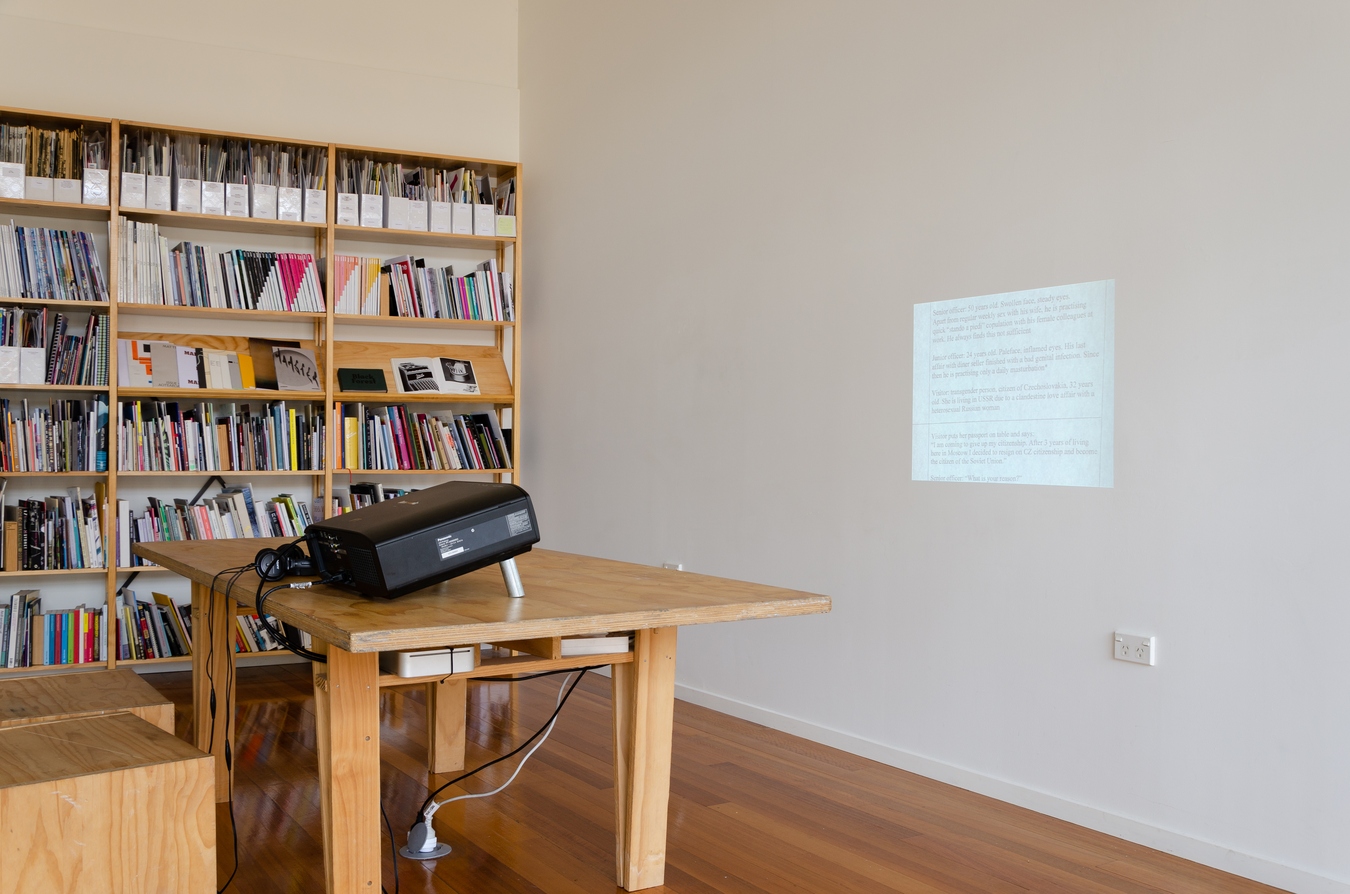 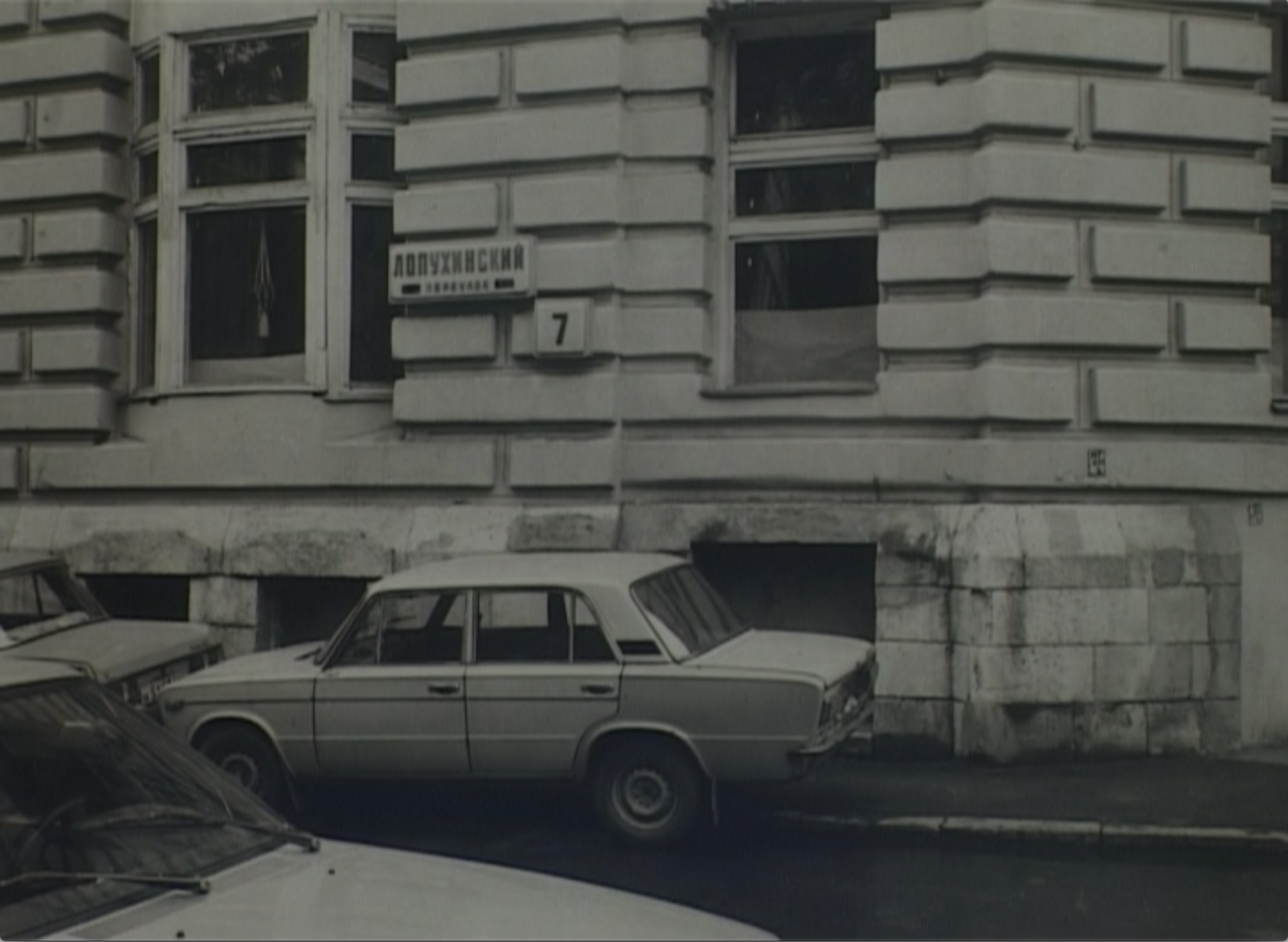 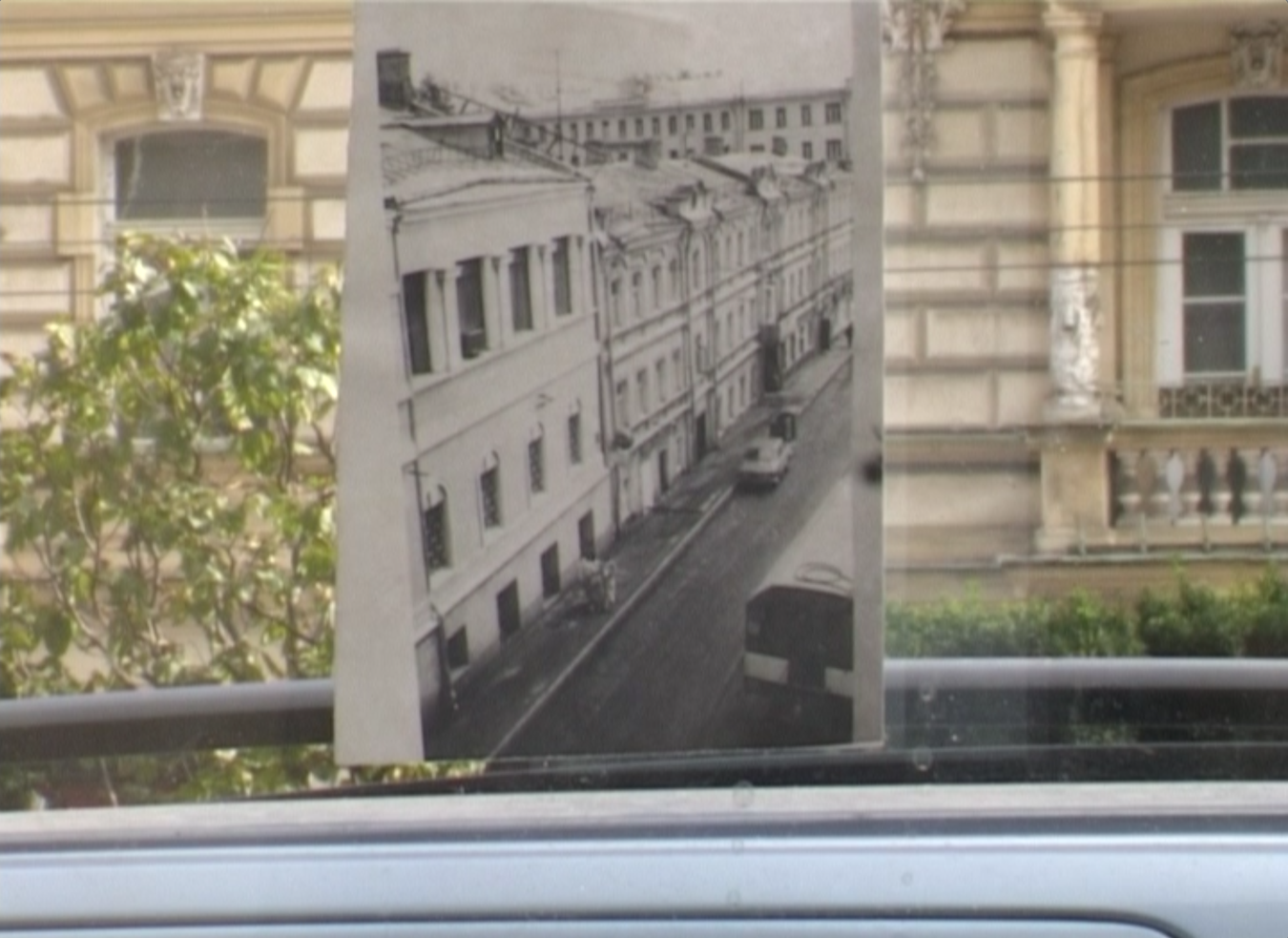 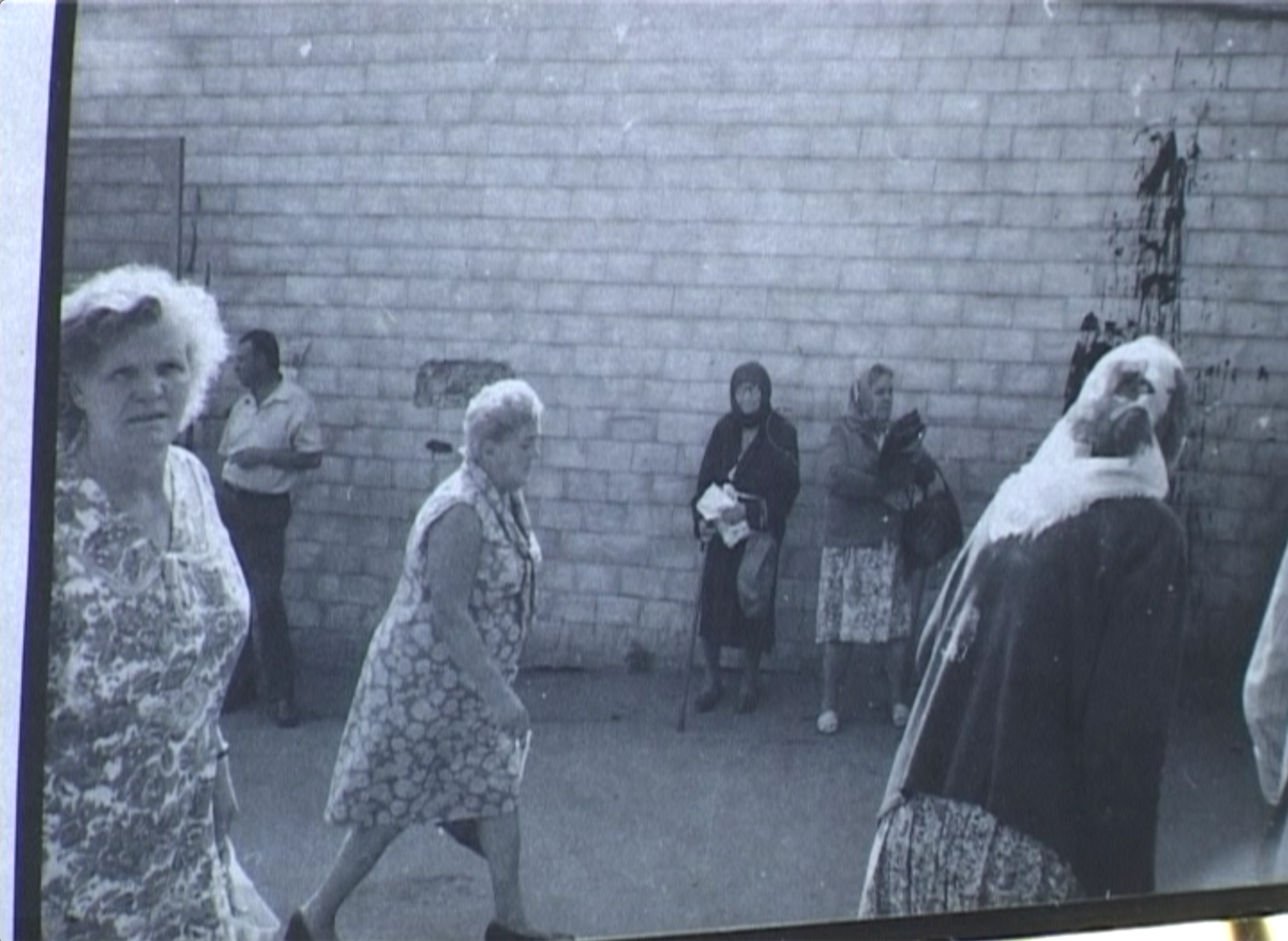 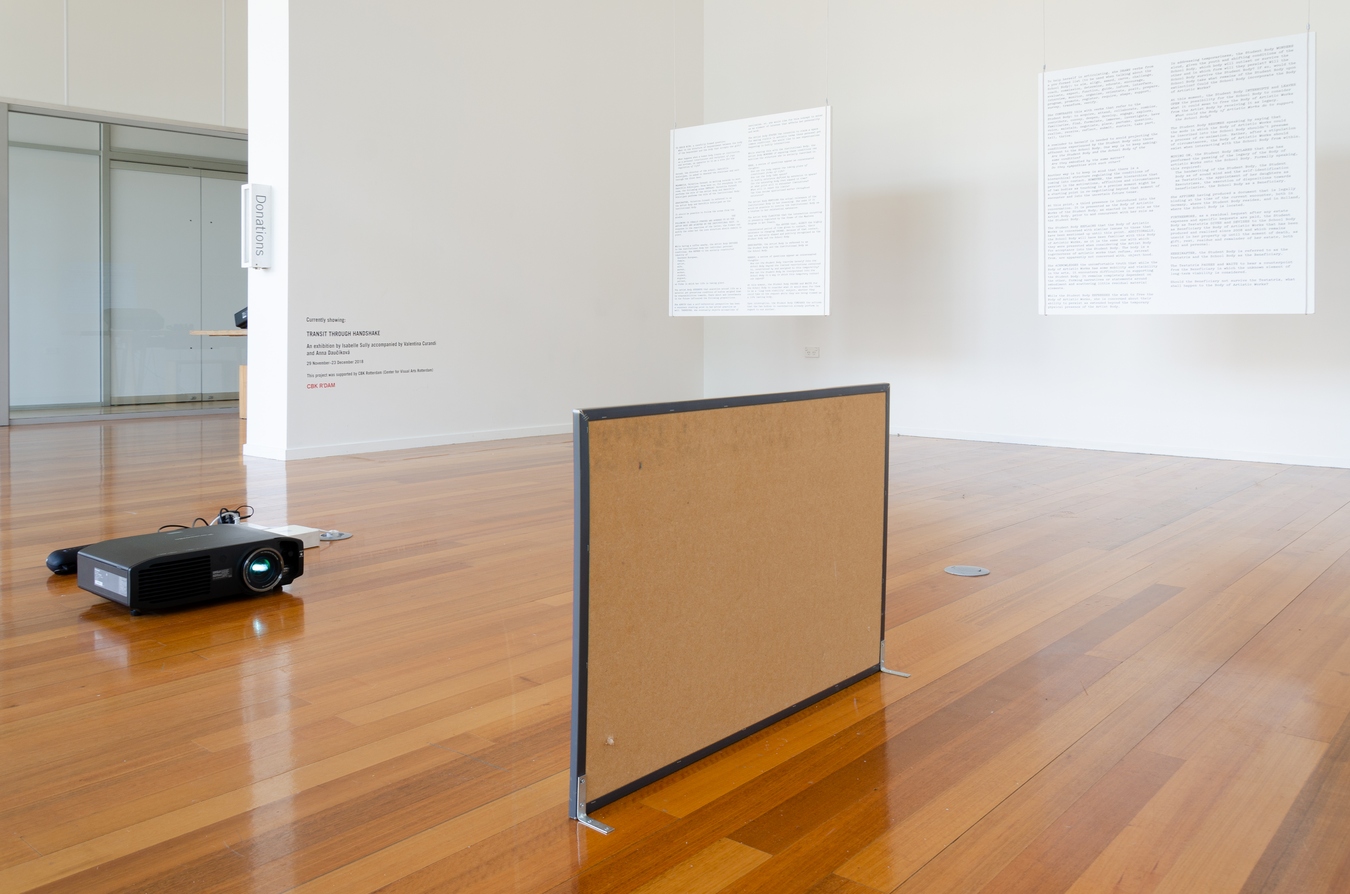 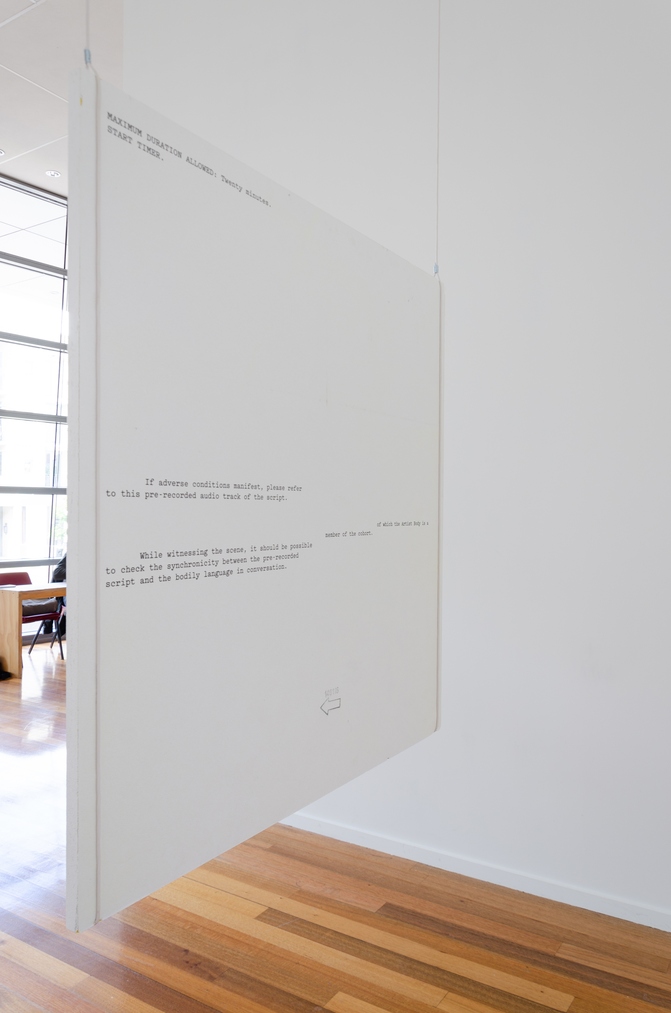 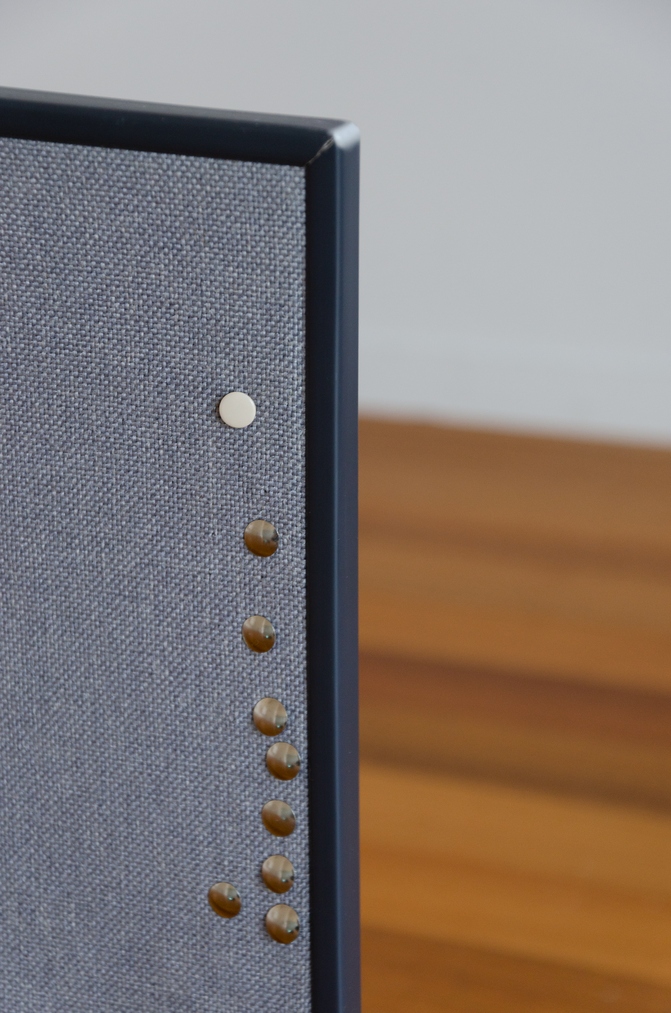 In 1957 a woman entered an office. Eagerly estranged from the path of family life, she began typing her way to freedom. The sound of two hands thinking flooded the office. Once animated and vocal, they eventually became repetitious and silent. By becoming so familiar with the machine in front of her—enough to be entirely mistaken for—she began to write off her own necessity. Yet in recognising her effacement, the woman, entirely disgruntled by this point in time, outstretched her hand from the edge of the frame and, in a leap of something entirely other than faith, reached in.

Transit Through Handshake is an exhibition by Isabelle Sully that attempts to engage administration as a site of intervention. By taking a fictionalised female typist as its key protagonist and through including the work of Valentina Curandi and Anna Daučíková in supporting roles, it asks how we might come to think of the figure as someone who can reach in and breathe life into the protocols of administration. To do so, and in an attempt to inscribe an otherwise unaccounted voice, the works in the exhibition take document making into their own hands. They record alternative state surveillance reports, script a malfunctioning machine and negotiate contractual obligation. Three approaches that work with a proximal relationship to administered power are then put forth—so as to grasp the legacy of the gendered subject from within the piles of bureaucracy’s proliferating present.

Isabelle Sully (1991, AU) works across art making, curating, editing and writing. Her context-based practice revolves around the social, economic and administrative mediation of publics within and through the frame of art, with a current focus on operational performance as it relates to the notion of the ‘supporting role’. Here, ‘performance’ does not necessarily mean the presentation of a dramatic act in its tradition sense, but instead could refer the appraisal of an activity undertaken according to expectations, requirements or capabilities. She recently participated in the exhibition series Sleeping with a Vengeance, Dreaming of a Life at Lítost, Prague, Yellow Brick, Athens, and Institute for Provocation, Beijing, as well as the two-person exhibition Ancillary Acts at KNULP, Sydney. At the beginning of 2018 she undertook the Art + Australia Residency at PHASMID Studios, Berlin, where, with support from Centrum Beeldende Kunst Rotterdam, she continued her ongoing research-project on the ‘artwork-as-lobby’. In 2017 she received an MA (Art Praxis) from the Dutch Art Institute and published the essays ‘At the Edge of the Frame’ in Kunstlicht, Amsterdam, and ‘The Anonymous Donor: On the work of Christopher D’Arcangelo via a curatorial problematic’ in Un Magazine, Melbourne. Alongside her practice, she is the editor at Publication Studio Rotterdam—a print-on-demand publisher operating within an international network of distribution.

Valentina Curandi (1980, ITL) is a practitioner with an experimental approach to text-based research, performance and publishing. She has been working as part of the collaborative duo Curandi Katz for the past ten years, focusing on the dynamics of interaction between human bodies and non-human entities such as sanctioned and informal institutions. The collaborative work explores the concepts of ‘delegation’ and ‘imposition’ that underlie practices of negotiation and collaboration. The projects entail practices of imposed care (A.D.L. A Labor of Love, 2013) and donation (The Pacifist Library, 2012); activate processes of familiarisation in conditions of cultural incommensurability (Panda Diplomacy, 2015); establish personalising correspondences (Mission Statement, 2012); and enact the bodily disciplinarisation of nonviolent protest in Laban movement research (Resist Everywhere Masako, 2015). In her parallel solo practice, Valentina develops performative work that focuses on the material-symbolic setup of the sexed and contracted willful subject of contemporary art and art education. Her ongoing theoretical and artistic research on feminist political economy and contract theory inquires how legal regulations and everyday management form the bond between woman and mortality and provoke the engulfment of the gendered subject into social roles. Lately, Valentina is initiating a series of new collaborations based on forms of affinity and a publishing house called Spell Bound Pages. She has shown works at the 16ma Quadriennale di Roma, Konstfak Stockholm, Kunstraum Munich, MOMA P.S.1, Flux Factory, Museo d’Arte Contemporanea Villa Croce, and the Moscow Biennial for Young Art, among others.

Anna Daučíková (1950, SK) is an artist and teacher. After graduating from the Academy of Fine Arts in Bratislava in 1978 she immigrated to Moscow (then USSR) where she lived and worked until 1991. Her extensive painting practice and interest in photography triggered by her encounter with feminist thought is related to this period. Returning to Bratislava in the 1990s, her artistic practice went towards video art and performance events, then widely organised in the Slovak art scene. In her video art the engagement of artist’s body and bodily action became her main concern in presenting her queer statements. Alongside her artistic work she was a co-founder and activist in several women NGOs and she became a spokesperson for GLBT rights in Slovakia. Her academic career includes teaching at the Academy of Fine Arts and Design in Bratislava and since 2012 at the Academy of Fine Arts in Prague. Since 1991 she has exhibited internationally: in 2018 at Neubauer Collegium, Chicago, Gallery Lítost, Prague, and Gallery Medium, Bratislava; in 2017 at documenta 14, Athens/ Kassel; in 2016 at Gallery Futura, Prague; in 2015 in the Kiyv Biennial/ School of Kyiv; in 2014 at Manifesta 10: Eastern Window, St. Petersburg; in 2013 in Good Girls, MNAC, Bucharest; in 2010 in Gender Check: Femininity and Masculinity in the Art of Eastern Europe, Zacheta National Gallery of Art, Warsaw, and MUMOK, Vienna, and in Ars Homo Erotica at the National Museum in Warsaw; and in 2009 in Kunst und Öffentlichkeit, 40 Jahre Neuer Berliner Kunstverein, Berlin.