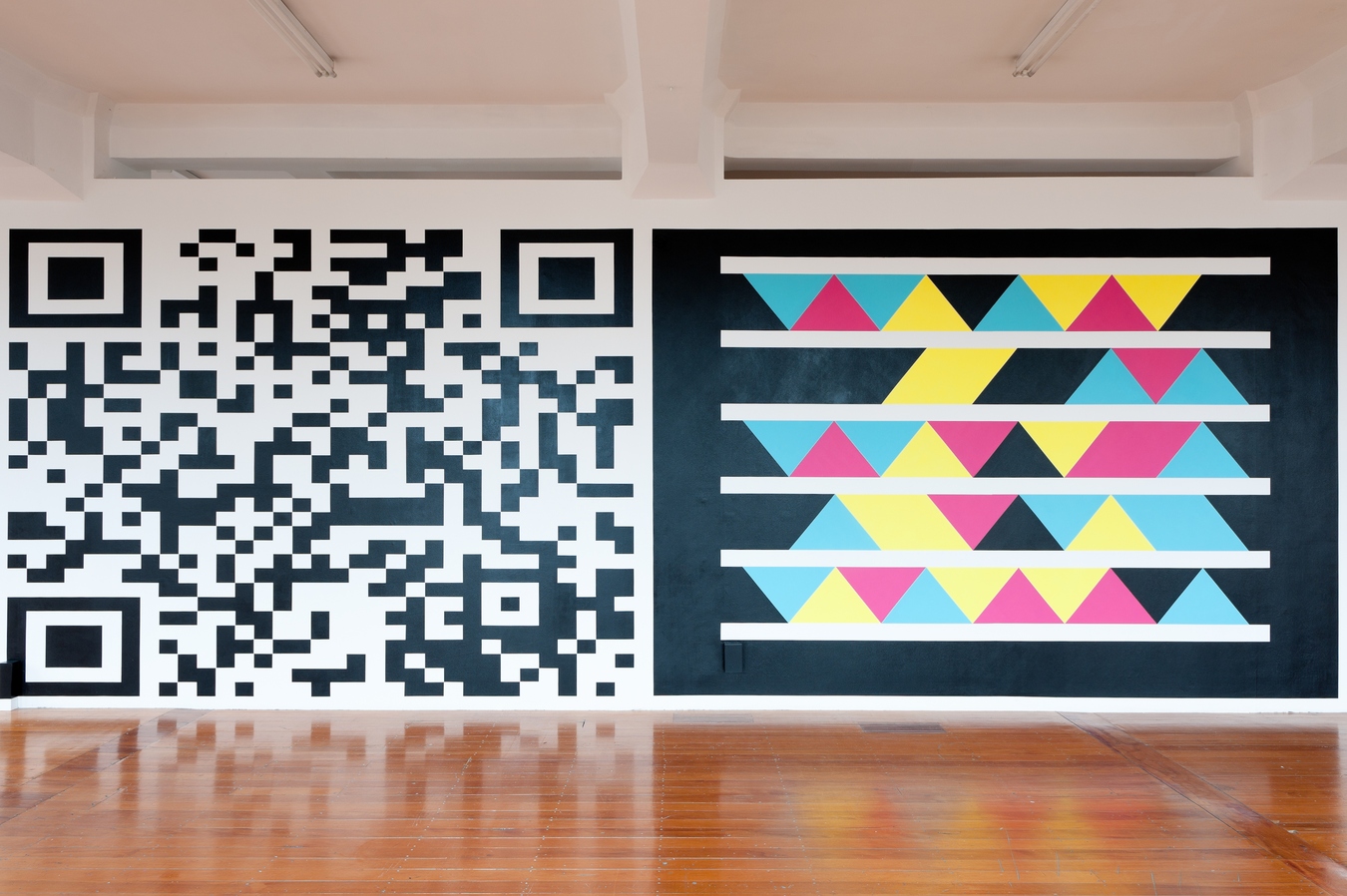 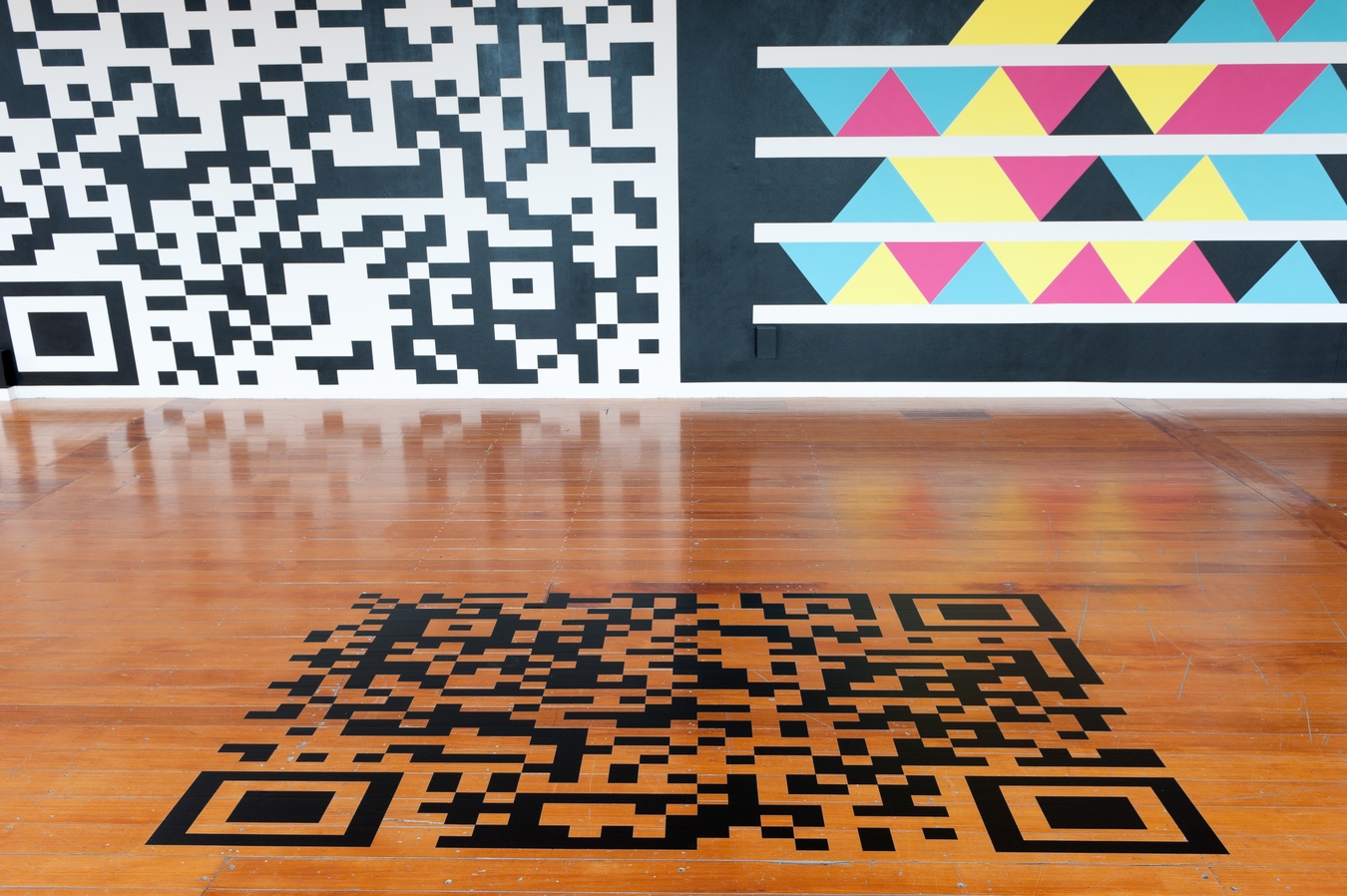 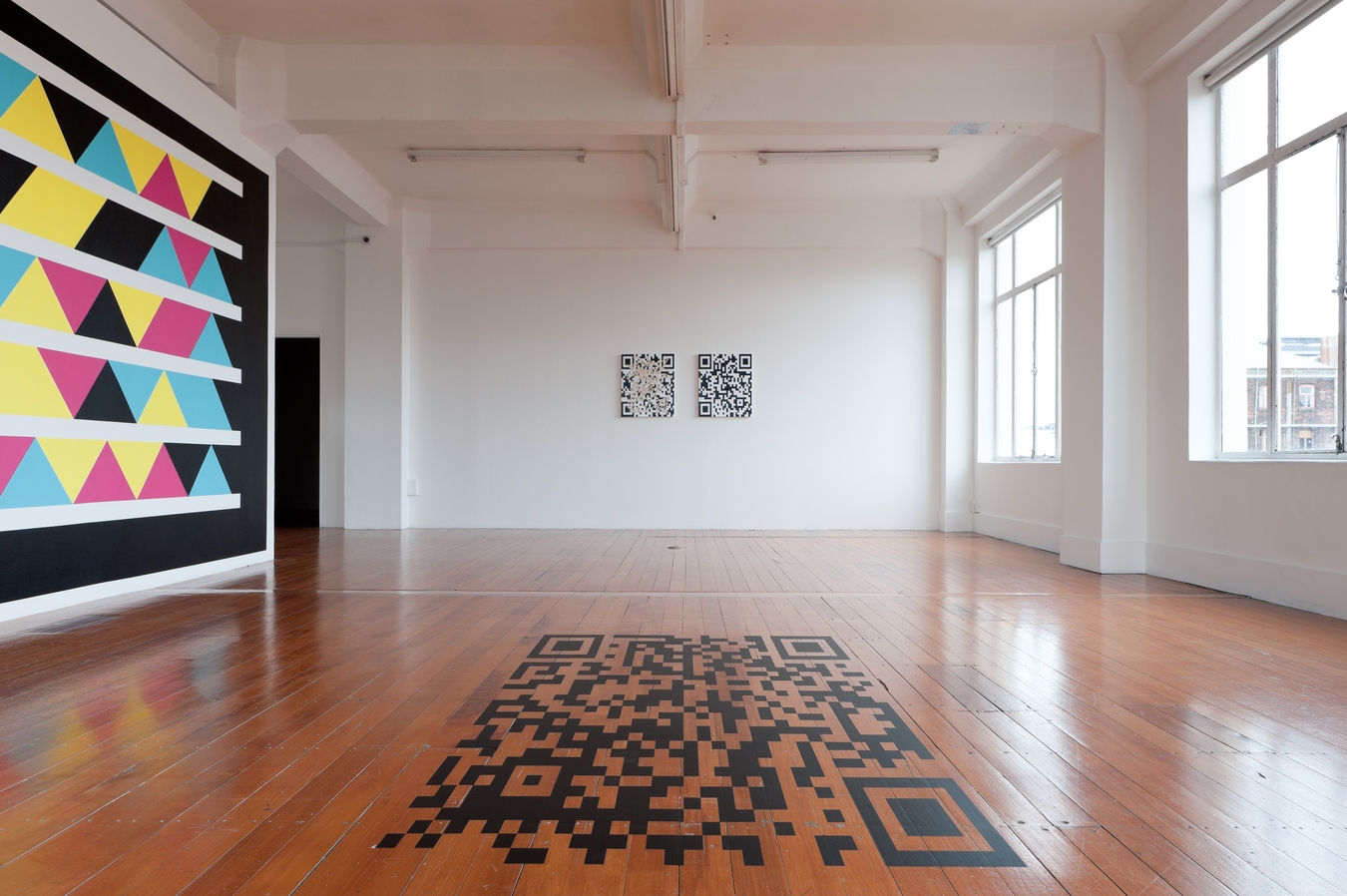 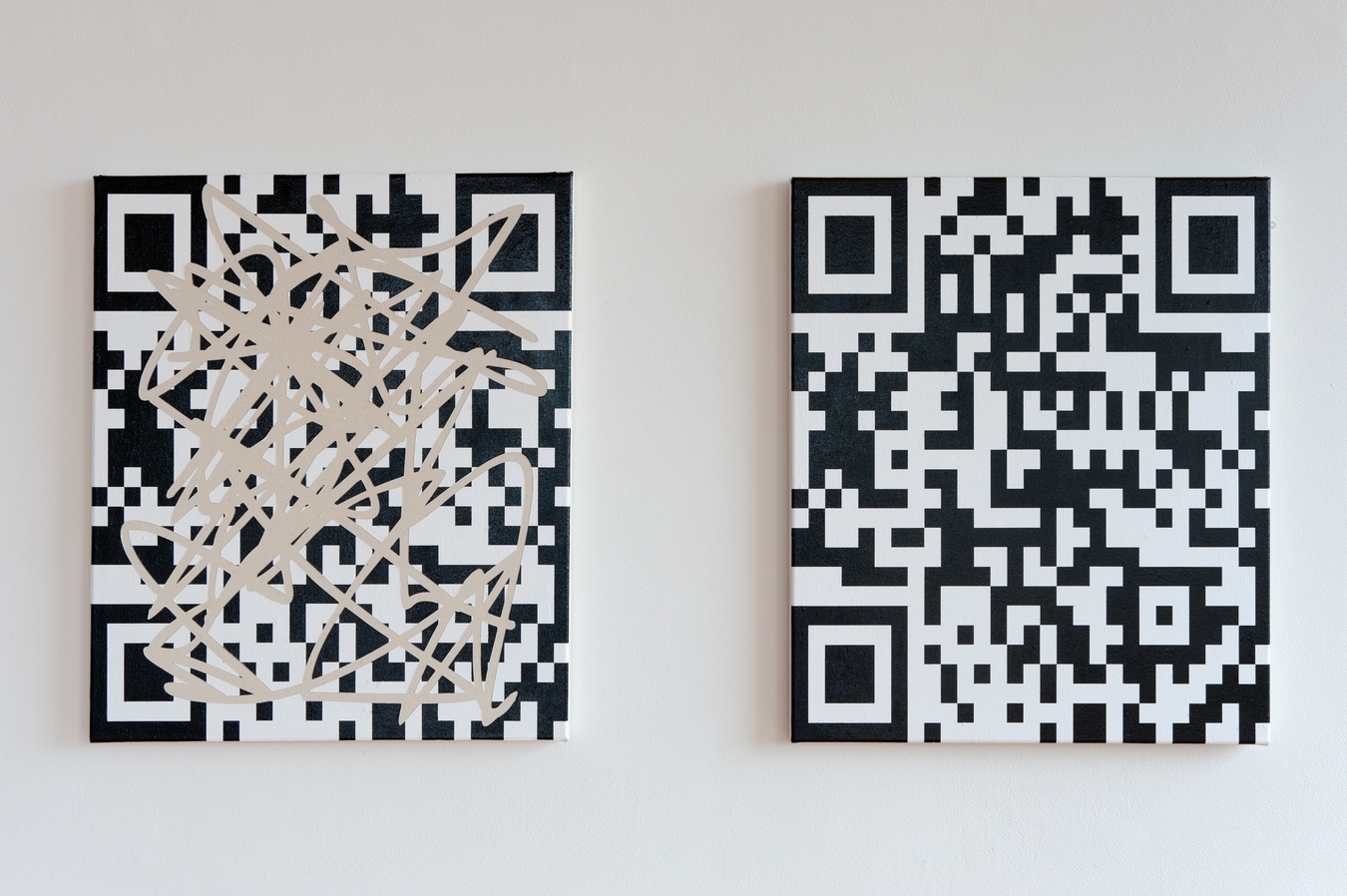 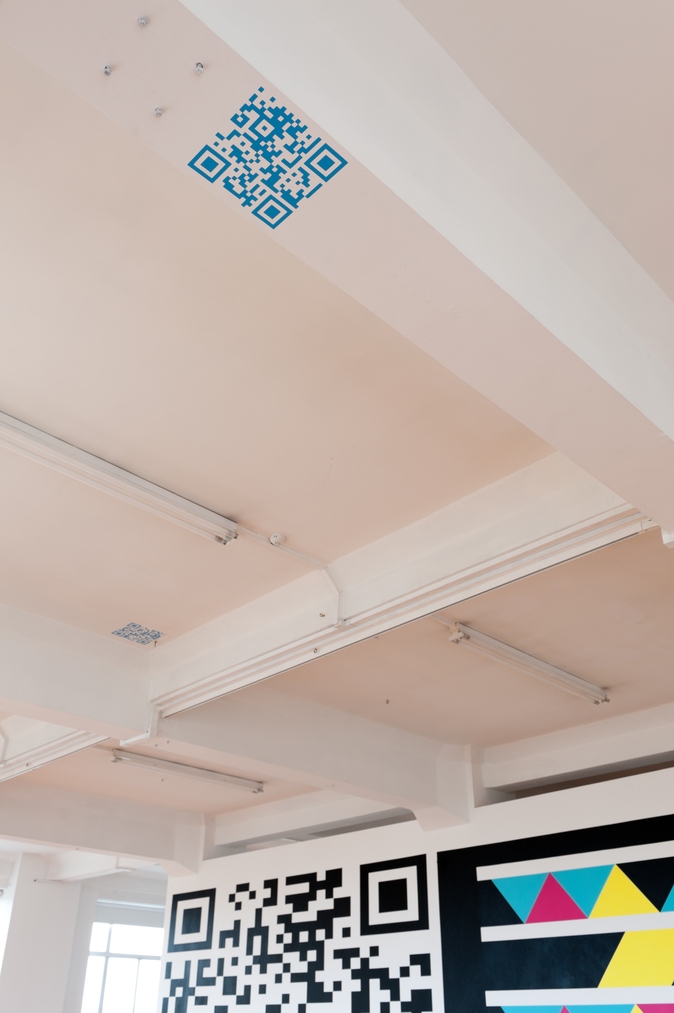 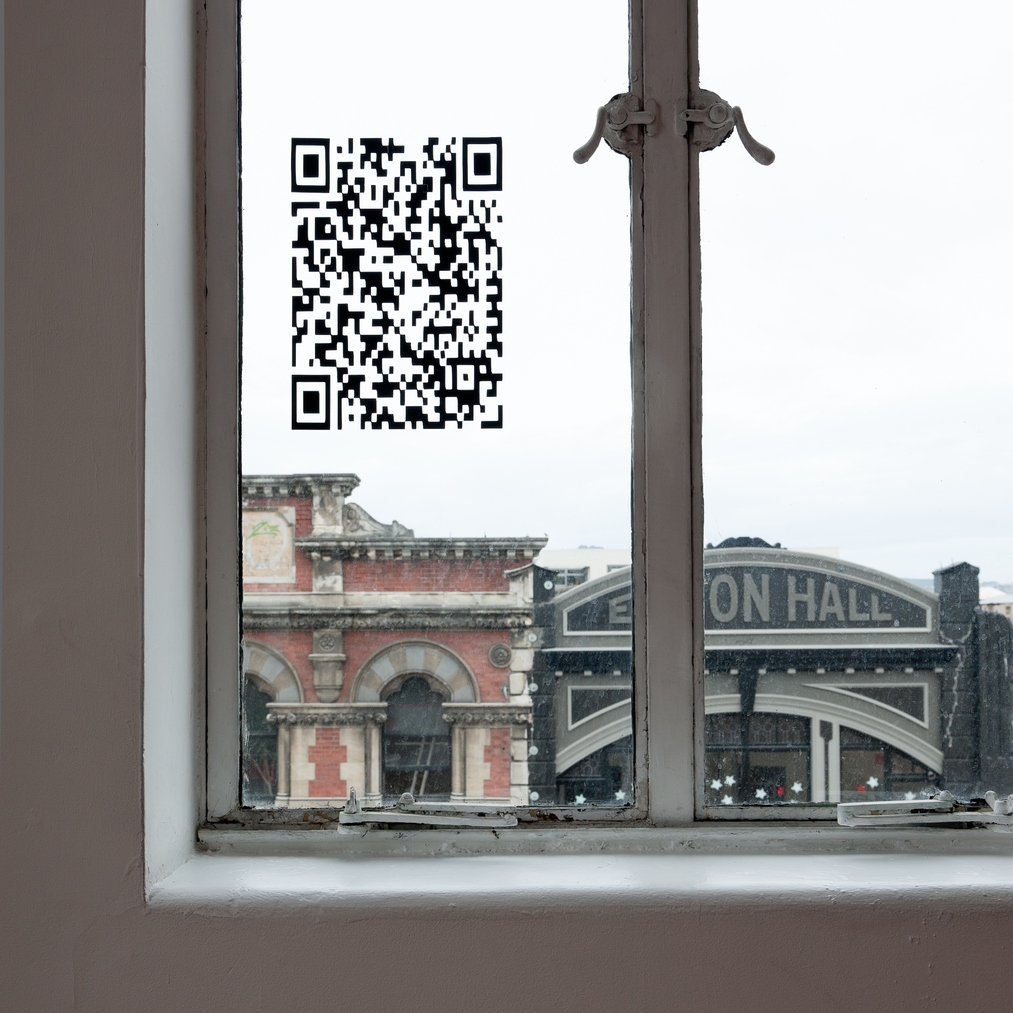 Underlying my practice is an investigation of how the conventions of painting might be interwoven with contemporary technologies, materials and aesthetics.

Hemer’s solo exhibition hyper/links introduces a new series of large-scale wall paintings based on the QR code. This specific type of two dimensional barcode has the potential to be read by smart phones, such as the iPhone, which are enabled with freely downloadable software. Once a barcode reader is loaded onto a phone and the artworks are scanned by the phone’s inbuilt camera, the software immediately redirects the user to web addresses embedded in the QR codes. In this way the paintings literally function like hyperlinks as they transport viewers to interrelated web pages with a single scan.

The links often reveal a degree of humour in the work. One large black and white wall painting, for instance, links to the San Francisco Museum of Modern Art’s online collection and displays an artwork by the celebrated American minimalist artist Sol Le Witt, which Hemer’s giant barcode closely resembles. The invite for the exhibition likewise features a similar barcode motif which when scanned by a smart phone translates as the title of the exhibition hyper/links.

Hemer’s expansive project fully utilises The Physics Room’s largest gallery—from floor to walls to ceiling. While his wall scaled paintings involve the entire body in the experience of the work, other smaller artworks are cheekily inserted into areas of the room rarely noticed by viewers. These smaller pieces activate latent areas of the gallery, creating a dialogue between the exhibition site and the predetermined grid logic of Hemer’s paintings. Just as Hemer’s artworks can be scanned by gallery visitors, the barcodes scan the room itself, highlighting details such as power outlets as well as the hooks and marks which bare traces of past exhibitions.