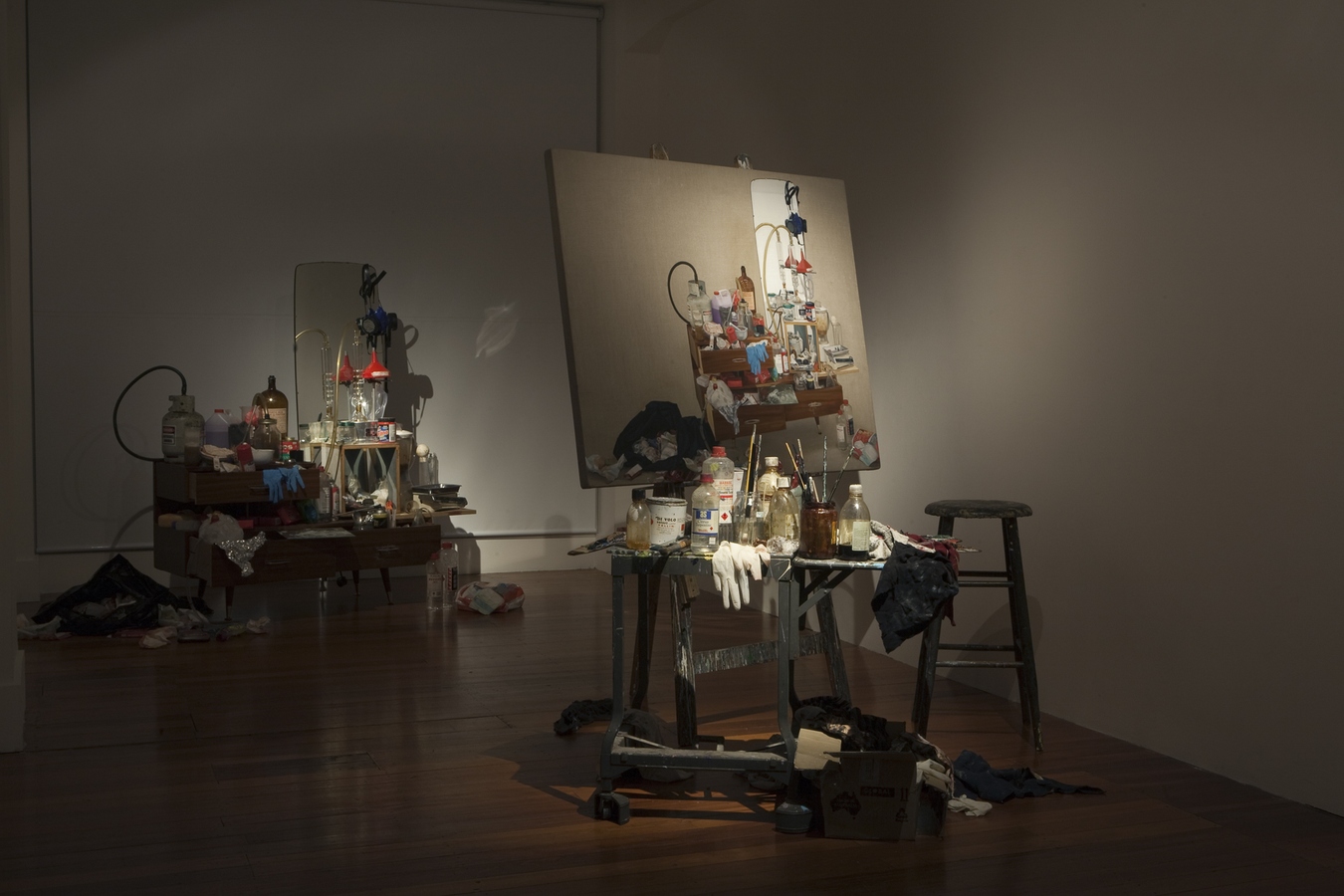 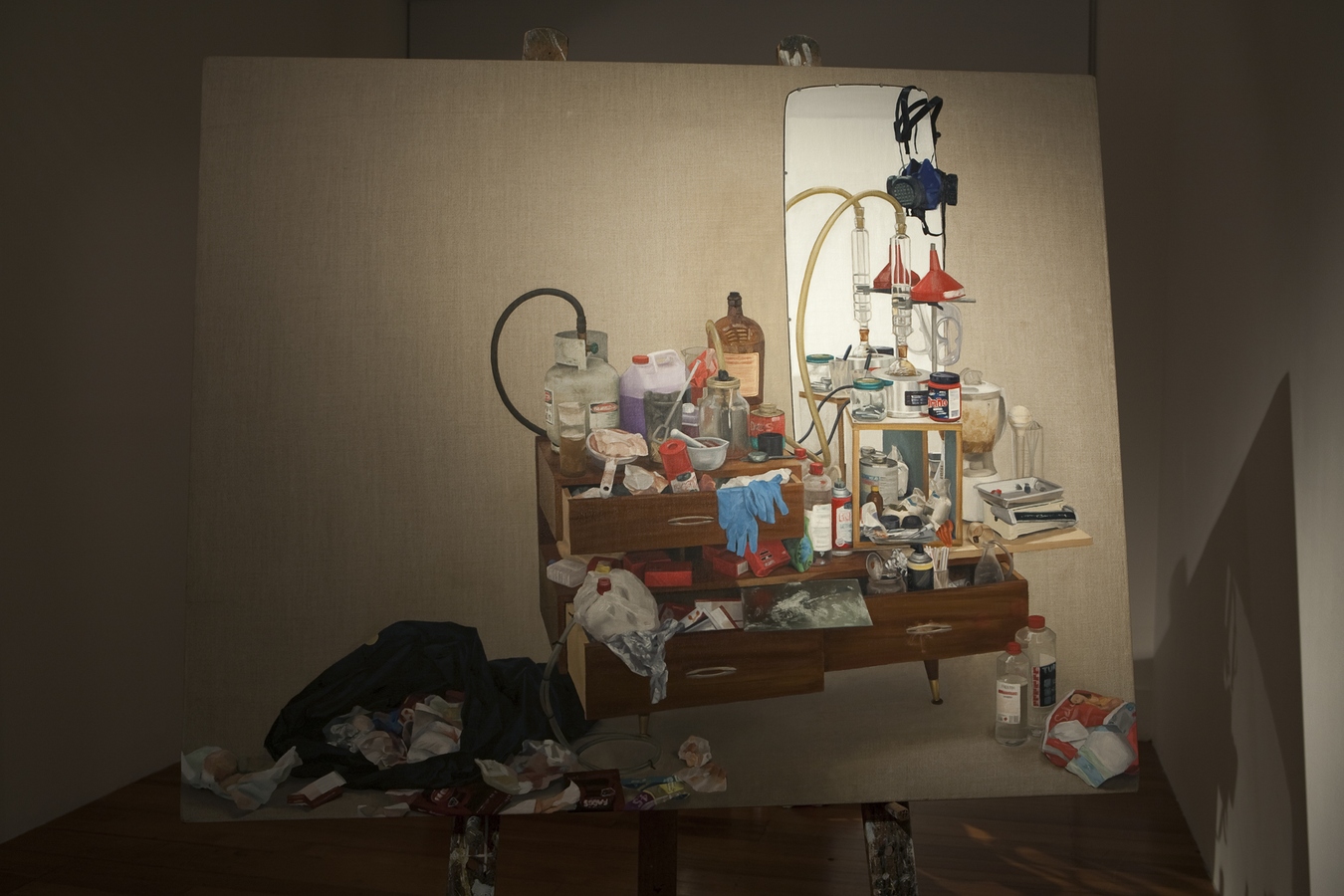 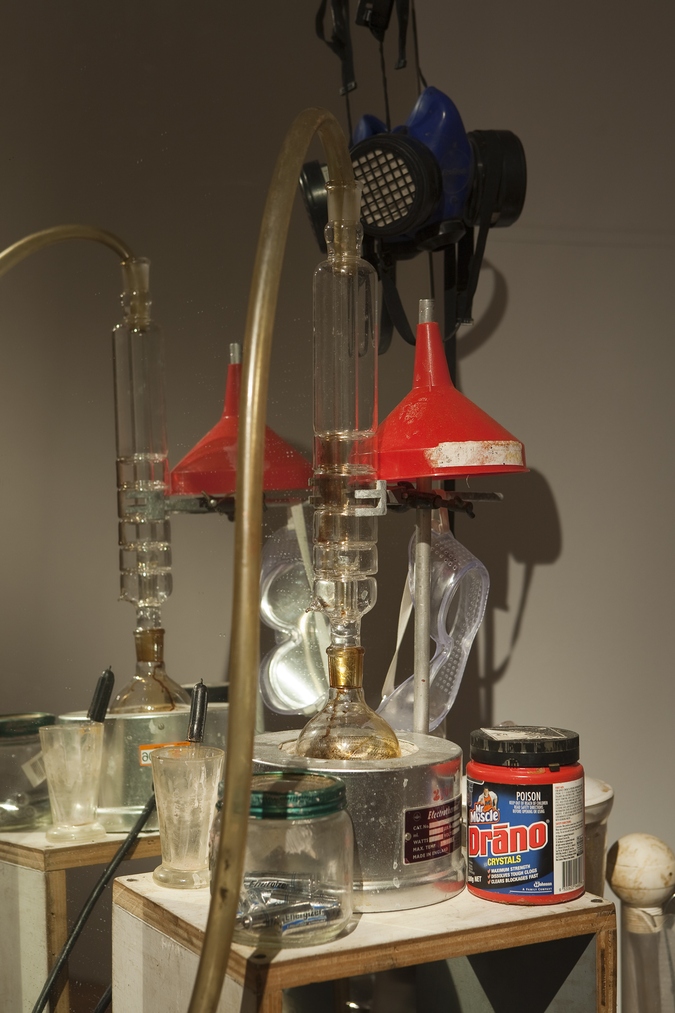 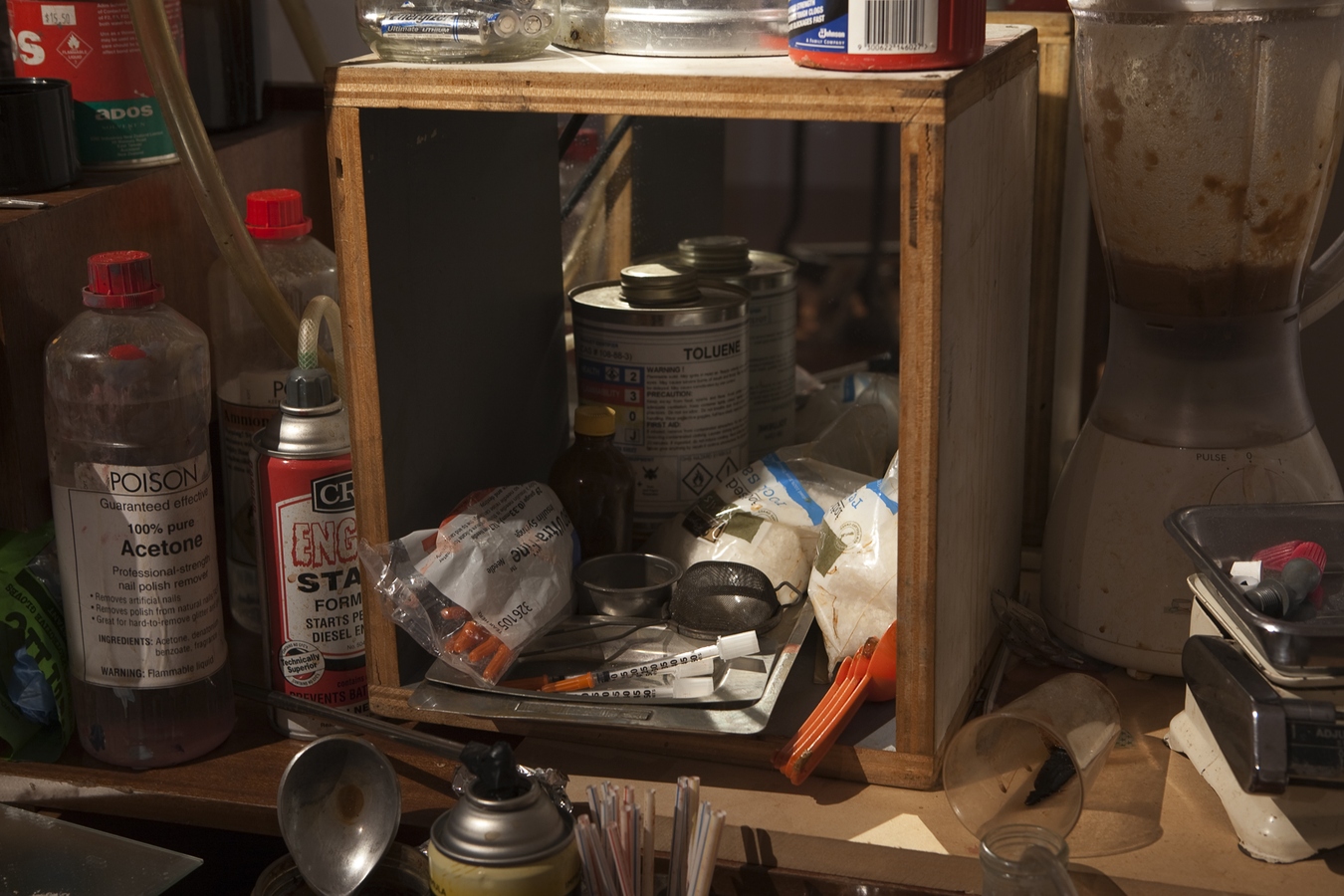 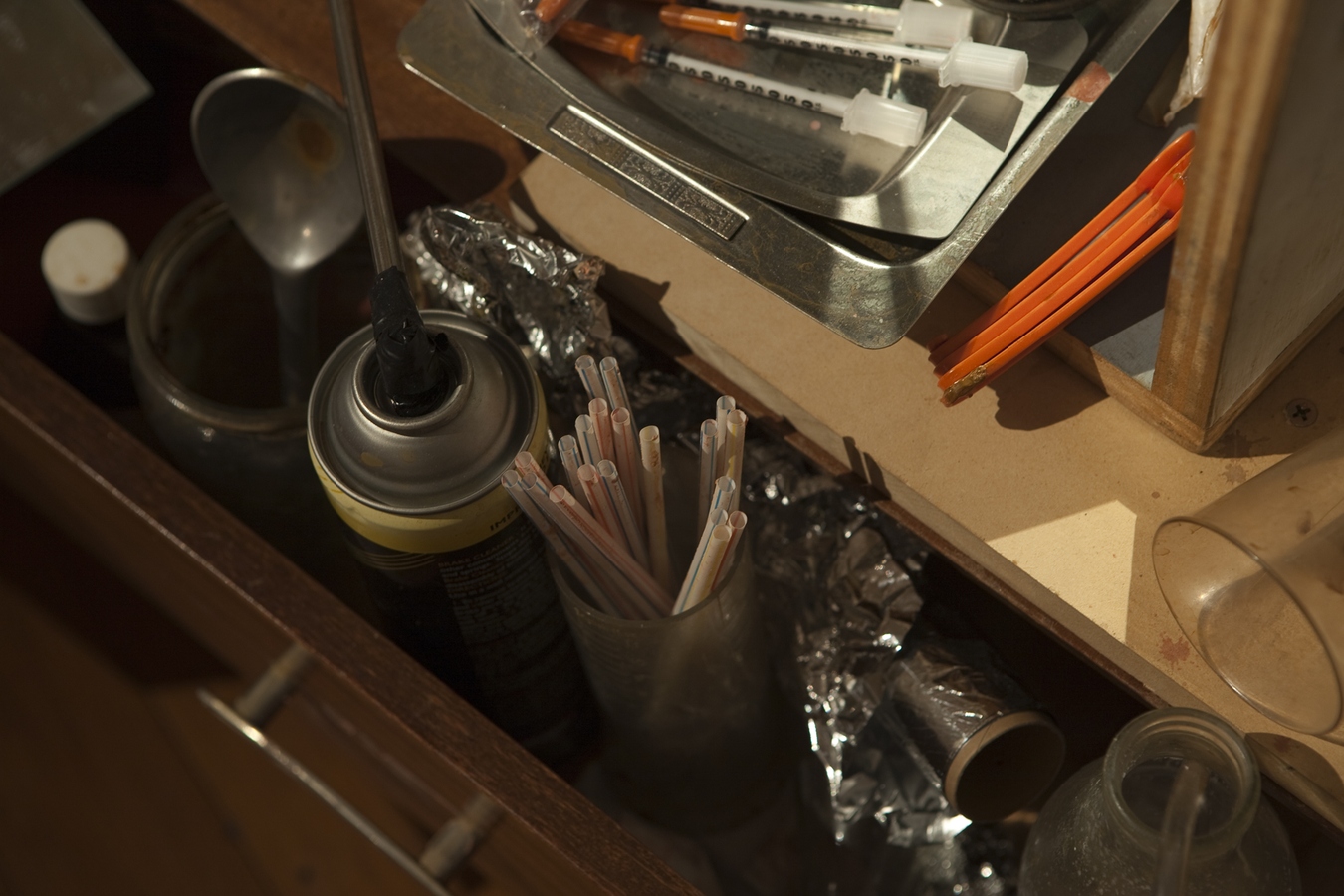 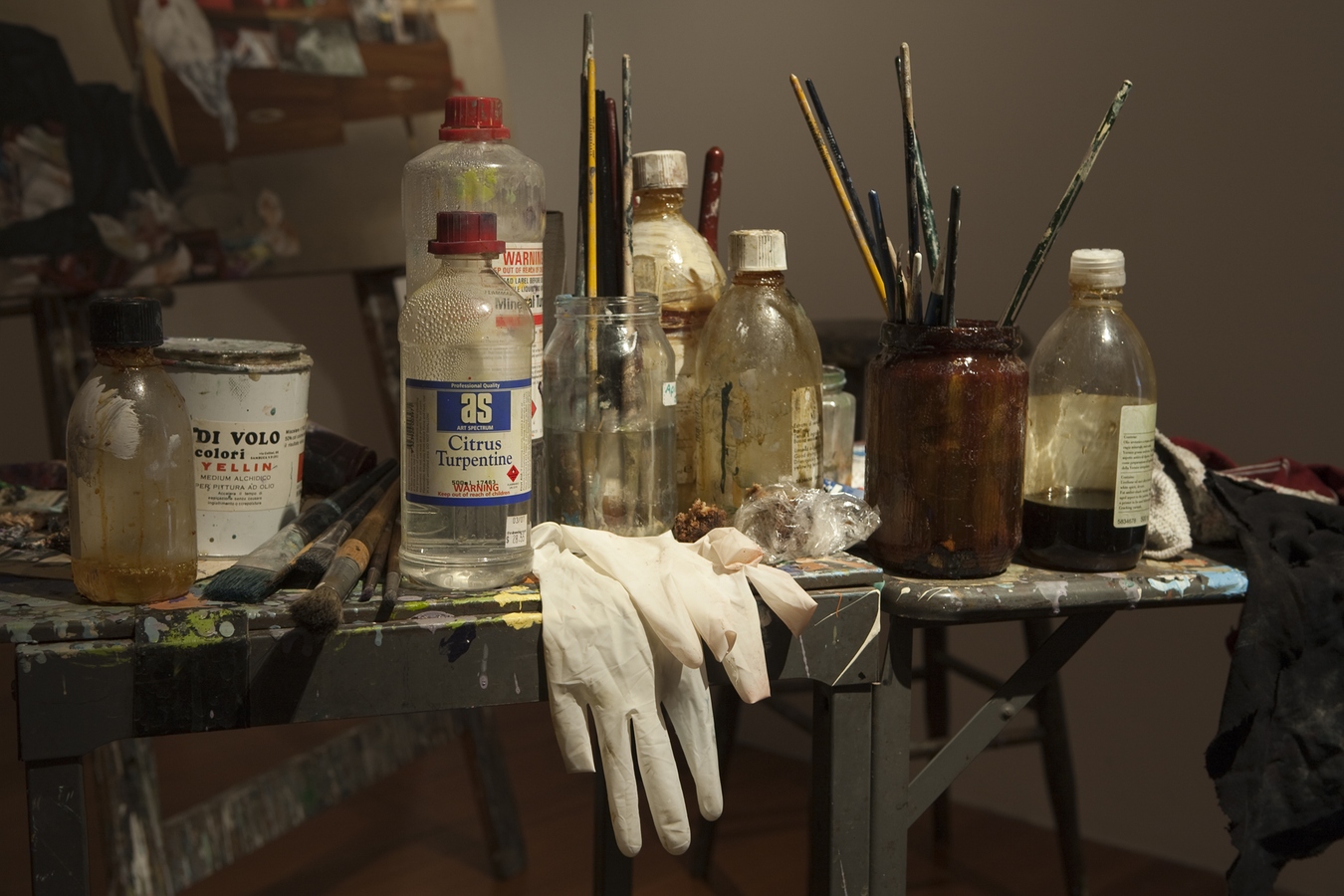 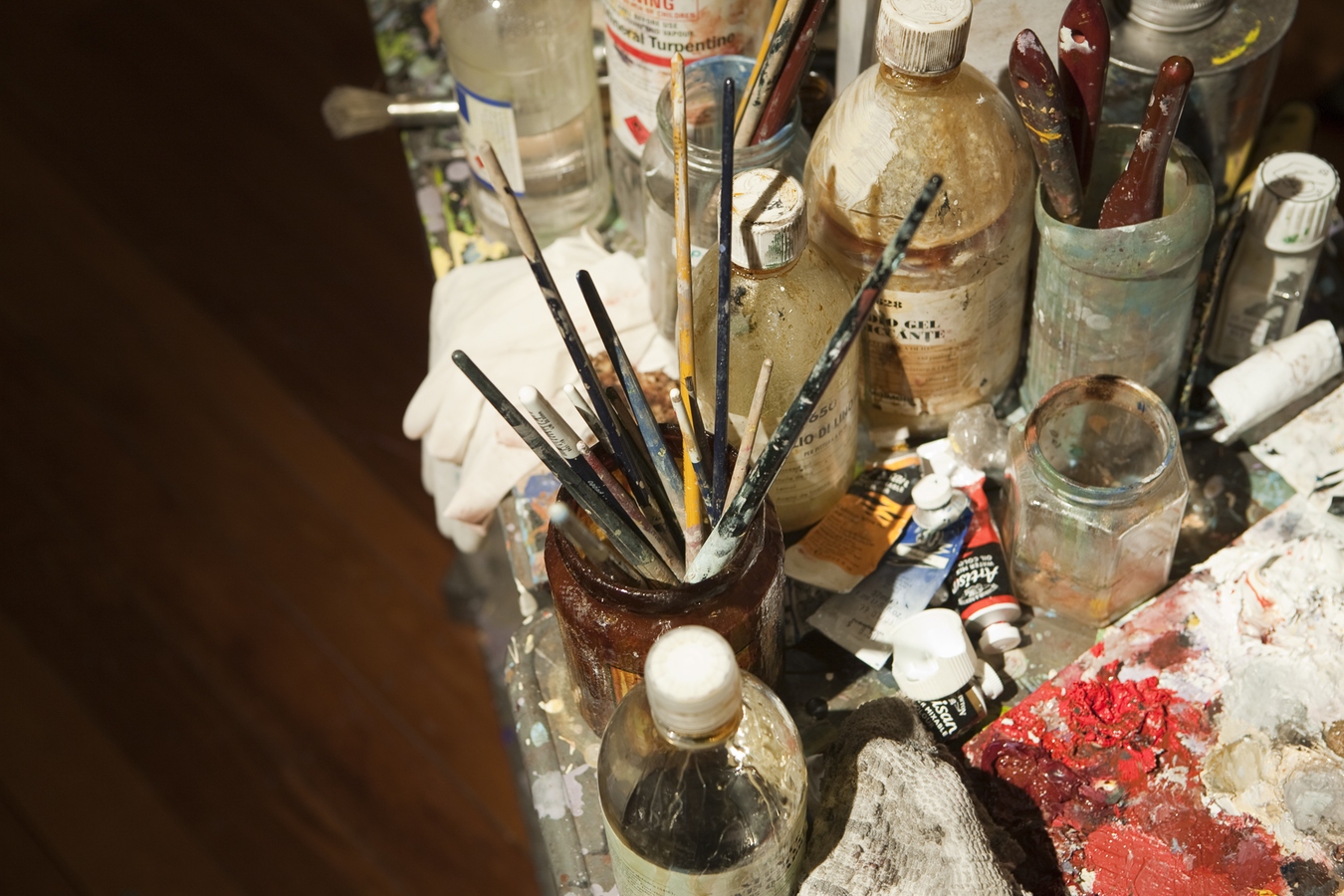 Presented as an abandoned tableau, Nature Morte offers up an unusual scenario that positions the apparatuses of art and artificiality altered states of consciousness in direct collusion. Described by the artists as ‘an atypical exercise’, Nature Morte draws us away from a simplistic consideration of the finished fine art object derived from the process of painting towards a closer understanding of the constructed artificiality of all representational effects.

Just as a diorama in an educational setting might construct a normalised version of events or depict a scene of special interest, Nature Morte relocates the aesthetic and clandestine paraphernalia of two enduring sub-cultural forms of production to the densely acculturated and publicly accessible space of the art gallery. Replicating a chaotic but static scene comprised of powders, liquids, tubes and vials all set upon a domestic dressing table, within Nature Morte Roger Boyce and Marie-Claire Brehaut also position a painted depiction of this purported meth-lab scene alongside the various painterly supplies that aided in its recreation.

Employing the notion of the tableau vivant in combination with supposedly deadly subject matter and the suggested presence, but actual lack, of any enlivening human figures, here two creative and unregulated industries equally dedicated to the disruption of the ‘everyday’ collide. Exposing select aspects of not only the painting’s production, but also that of illegally produced methamphetamine products, various falsehoods and self-perpetuating morality plays are set to ricochet around the premise and symbolic content of Nature Morte. Yet, by selecting, constructing and reproducing the contemporaneous—even if most often covert—scene of the meth-lab, Boyce and Brehaut equally endorse the social and historical role to which representational painting’s conventions continue to lay a tacit and enduring claim.

Marie-Claire Brehaut holds a BFA from the University of Canterbury School of Fine Arts. In 2009 she was the recipient of the Bickerton Widdowson Trust Memorial Scholarship in Fine Arts, and also the New Zealand Federation of Graduate Women Trust Award. In 2008 she was awarded the Sawtell-Turner Prize in Painting. Brehaut has been in groups shows around New Zealand since 2008. She lives and works in Christchurch.

Roger Boyce has exhibited solo in New York, Los Angeles, Chicago, San Francisco, Paris and New Zealand. His works have been exhibited at the Sao Paulo Biennial, Brazil; The New Museum of Contemporary Art, New York; P.S.1’s Clocktower Gallery, New York; Creative Time’s Art in the Anchorage, New York; FIAC/Decouvert at the Grand Palais, Paris; The Drawing Centre, New York; and Otis Parsons Art Institute, Los Angeles. Works by Boyce are held in a number of international collections and he has contributed critical writing to Art in America, Sculpture and Art New Zealand, among other publications.