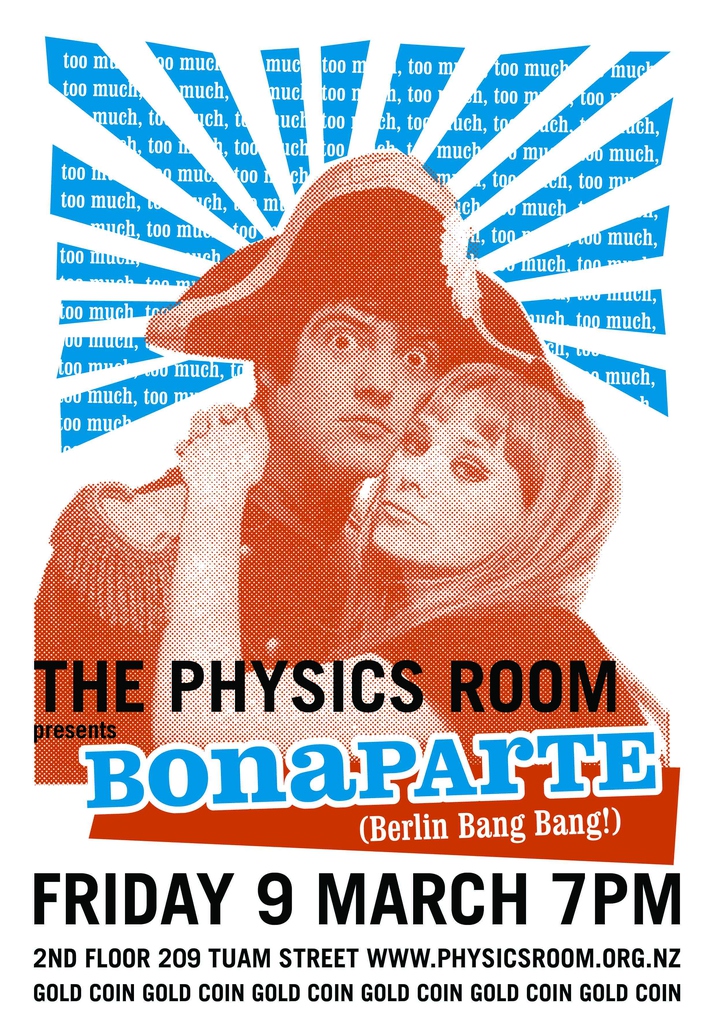 What else does one say? Achtung! He's coming.

Next month marks the arrival of solo electro-trash-punk act Bonaparte to New Zealand - a one-man live act who knows how to maximise a laptop and guitar. Direct from Berlin, via Barcelona and Bern, this plucky Swiss musician will present a powerhouse of unique electro-pop-rock up and down the country, with a special down beat performance for the gallery audience at The Physics Room.

Born 1978 as Tobias Jundt (TJ) in Switzerland, he currently lives and works in Berlin after running away from pop-stardom in Switzerland. A multi-instrumentalist he studied at the Swiss Jazz School and Berklee College Of Music (Boston, USA). He's written a book, and performed hundreds of concerts in Europe, USA and Asia under various guises. He'd hate you to know it but he was awarded "Songwriter Of The Year 2005" by SUISA (the Swiss equivalent of APRA). He also works as a composer of film-music ("Mein Name Ist Eugen") and multi-media-art, and has songs released on Universal, SongBMG, Capitol and EMI.

He's played the Montreux Jazz Festival, Volkshaus Zurich, AVO Session Basel, World Expo 2000 Hannover, has even written a song that was performed by the seven Presidents of Switzerland on the steps of Parliament to promote Swiss fitness.

This show will be a must-see. He's already being mobbed by kiwis on myspace who have heard he is coming. And he's getting ready for the New Zealand experience. Wide awake at 4am in Berlin he says, "I slept 16 hours until today at 2pm but I try to get into the NZ time frame already. I feel so New Zealndian already. I think I will stay down there."

Don't miss the opportunity to catch this unique euro trash at The Physics Room.