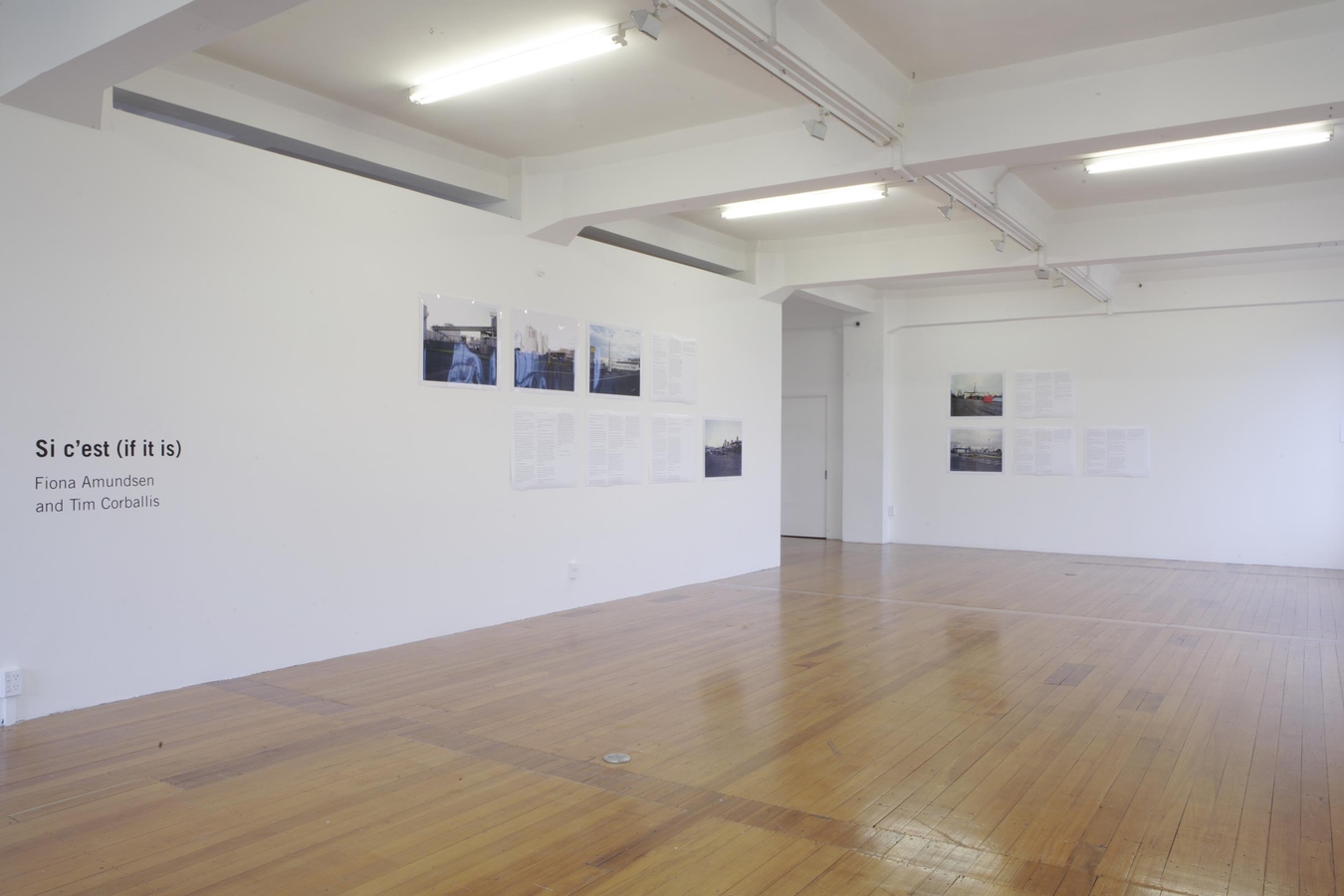 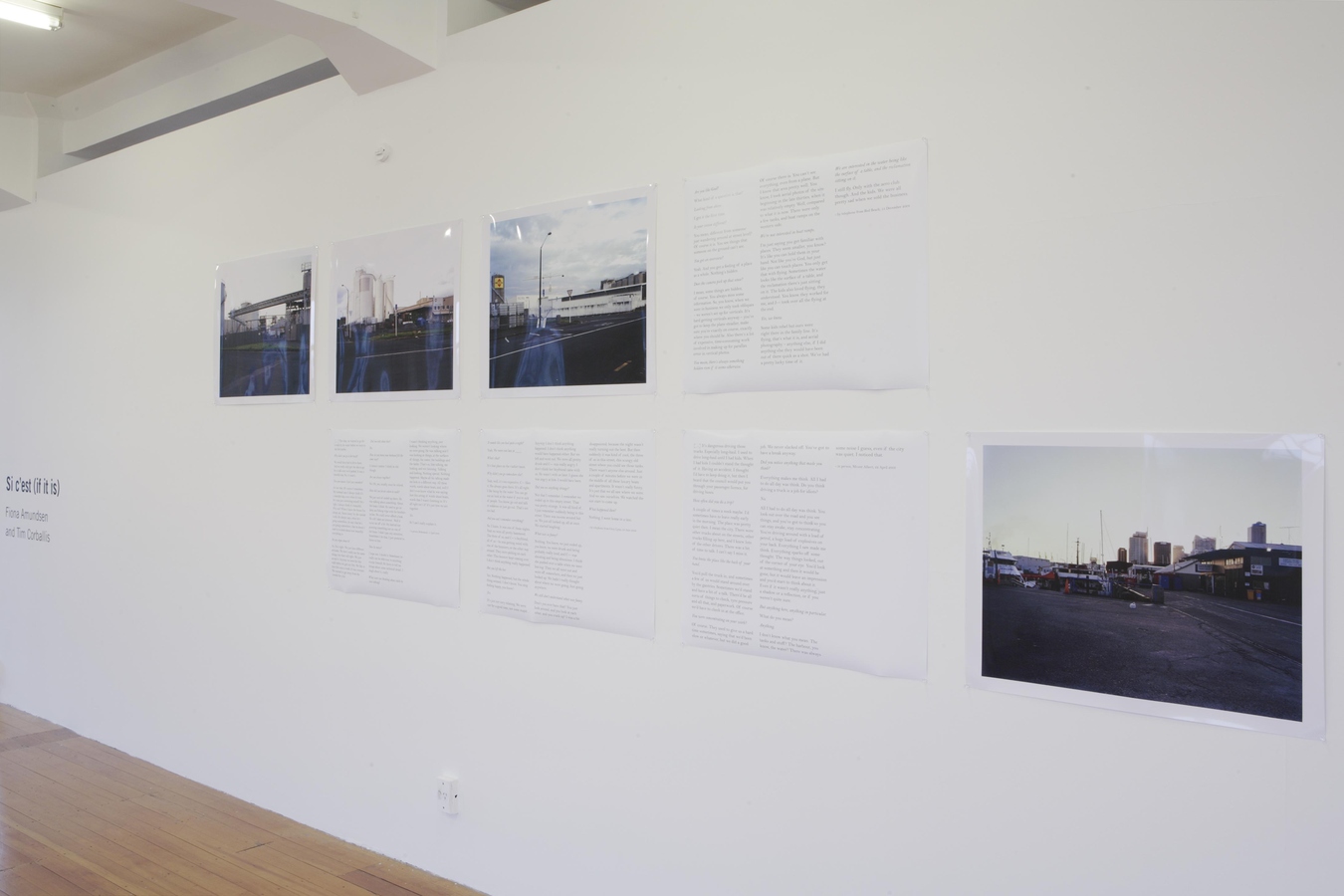 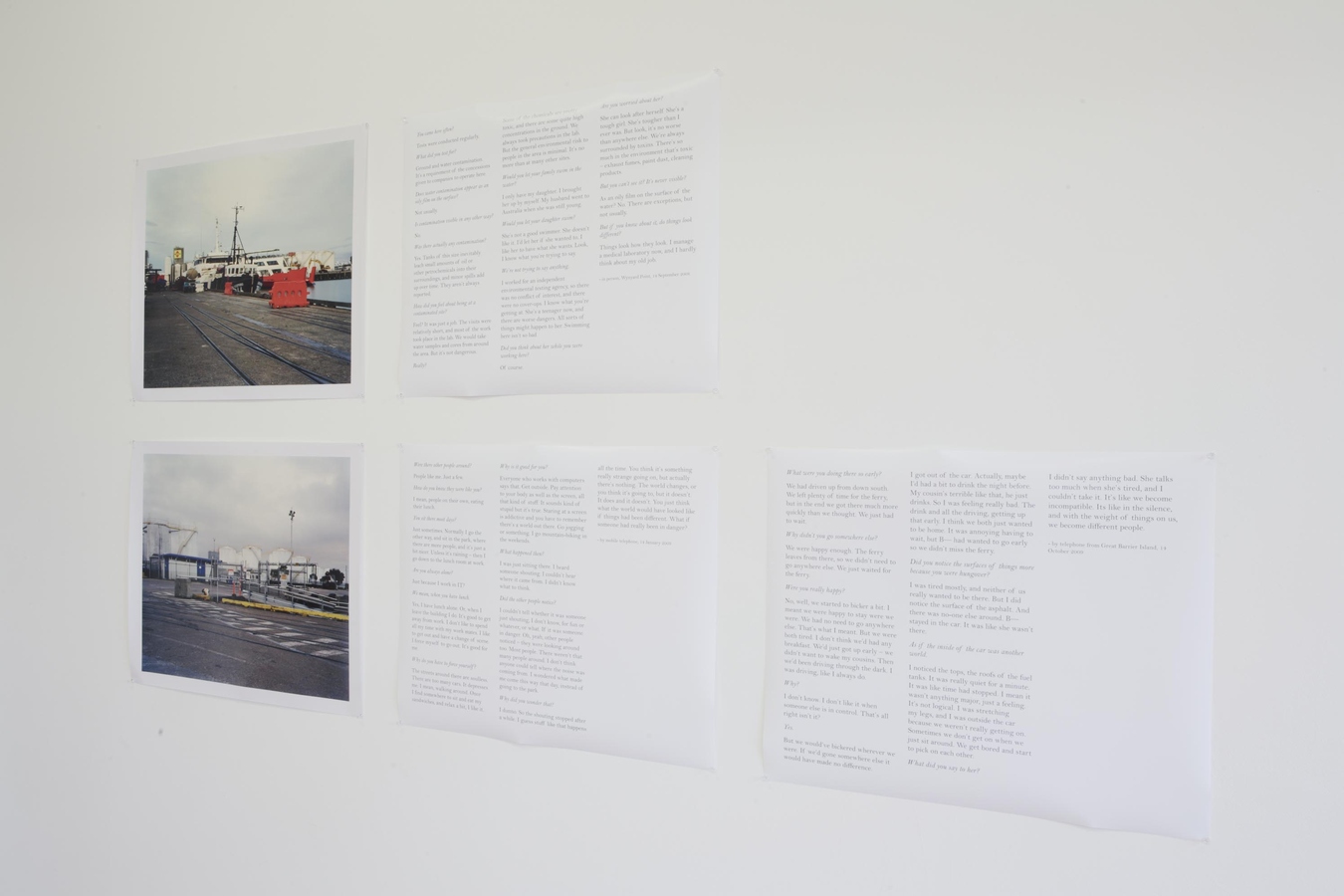 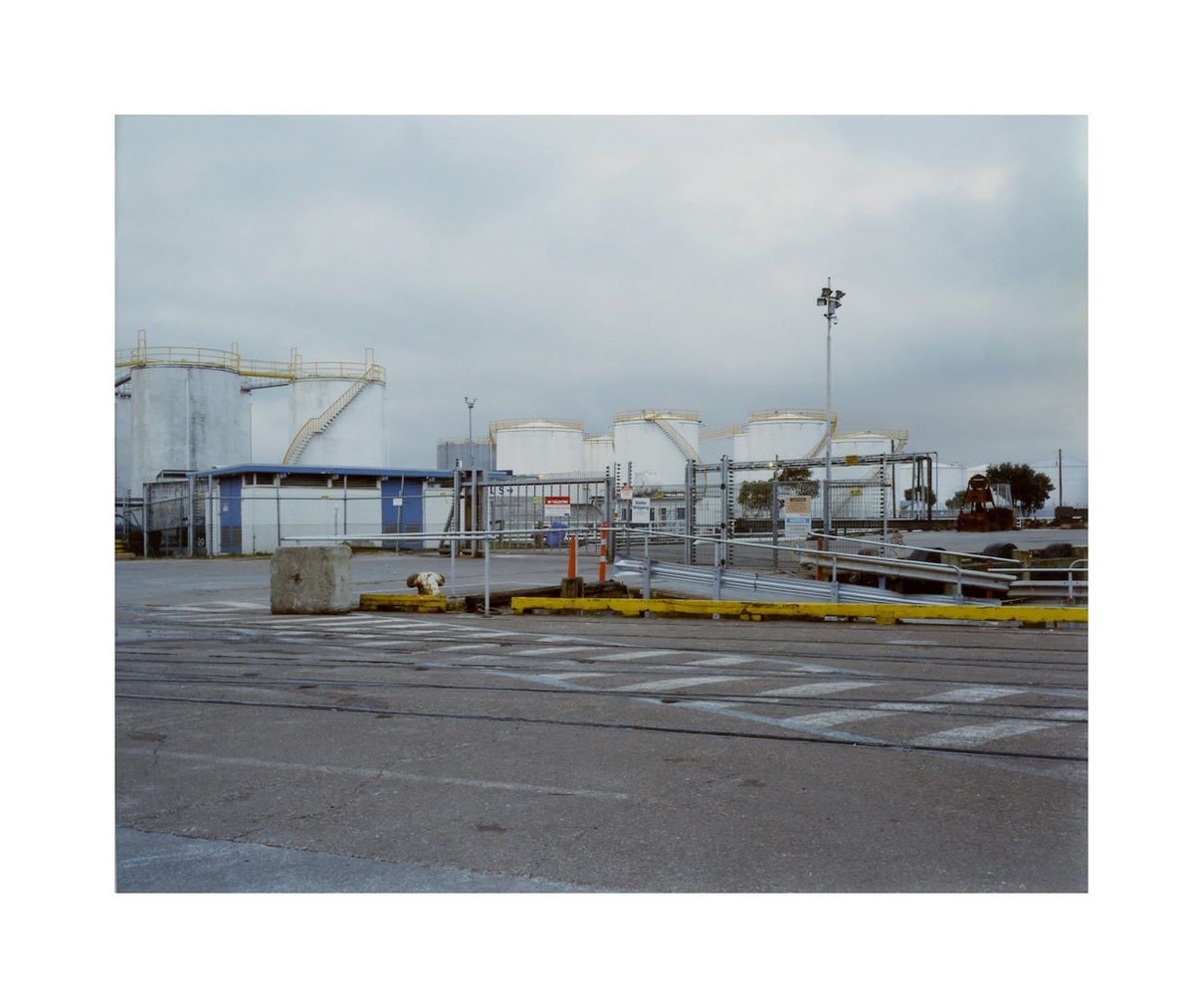 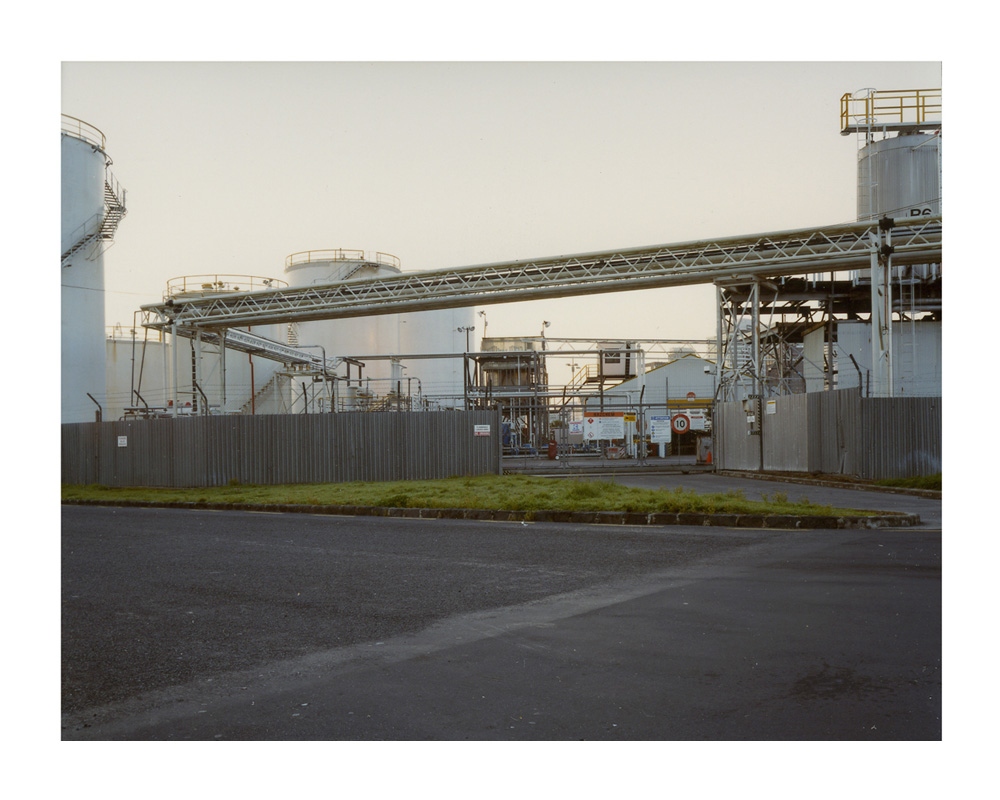 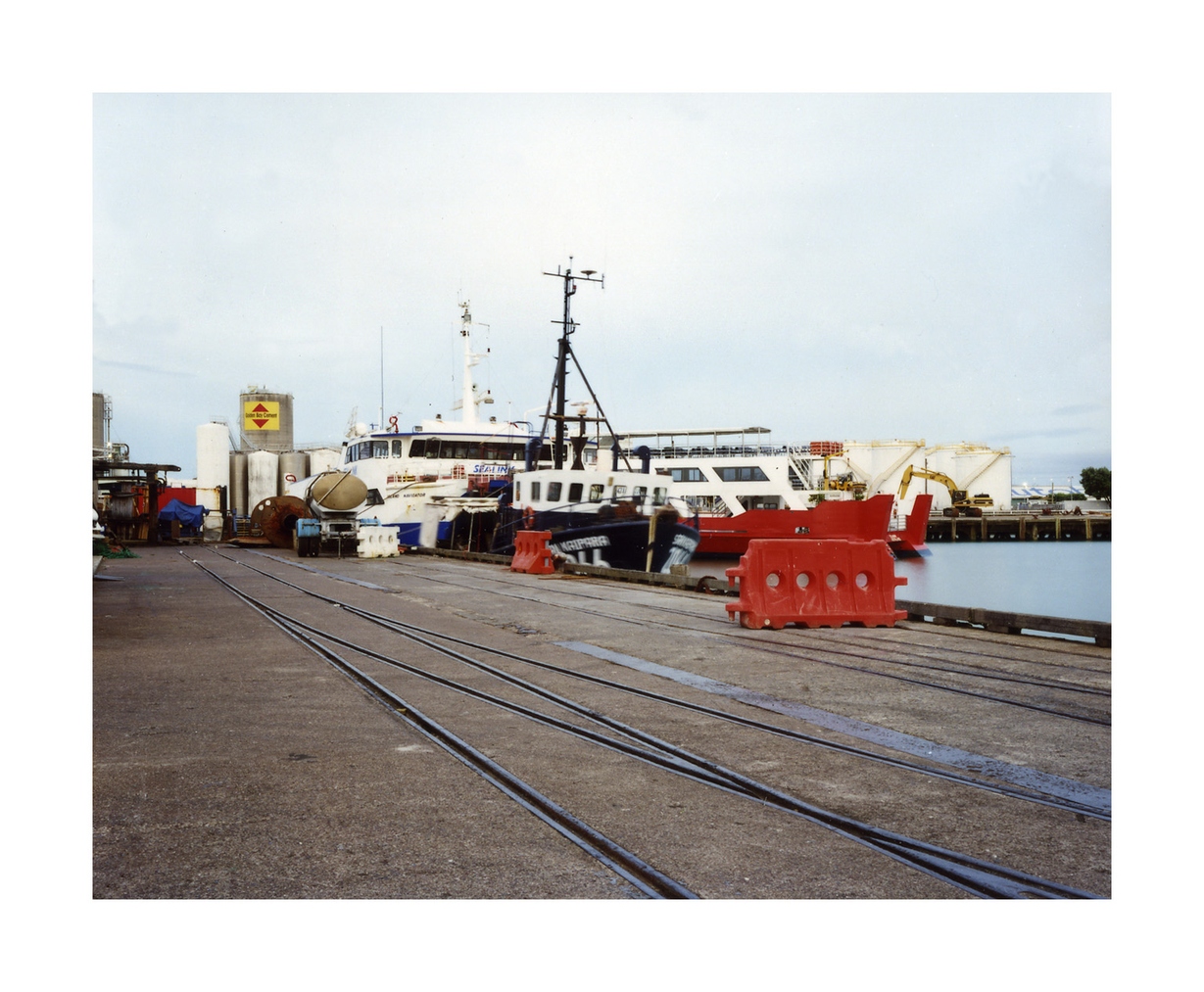 Si c’est (if it is)is a collaboration between Fiona Amundsen and Tim Corballis, based on a sustained investigation of a specific urban site: Wynyard Point (also known as the Tank Farm), a now largely demolished part of Auckland’s industrial waterfront. The project creates a series of works in two different formats—photographs and written text(s)—that relate artistically/aesthetically, while avoiding the primacy of one form over the other which is found in the standard text-photo relationships, caption and illustration. Si c’est works with the unavoidable lack of equivalence between text and photo, and with their irreducible differences: linear vs. planar, created vs. recorded, implicitly vs. explicitly narrative. In this regard, Amundsen’s photographs which question and ironise any ‘scientific’ view of place will be juxtaposed with Corballis’s invented interviews of tangential relevance to the site, which in themselves are reminiscent of oral-histories or courtroom cross-questioning.

Disrupting our attempt to understand the site under investigation, each artist’s work brings into focus the subjectivity behind their attempts. The juxtaposition of these two forms of documentation further complicates our view suggesting at least two (eye and voice), or possibly multiple subjectivities, as the audience reads back and forth between photographs and texts. Indeed, throughout this exercise if Si c’est reveals anything about Wynyard Point, it is that such sites can at best be viewed partially, through a range of fragmented views that refuse synthesis.

Wellington-based writer Tim Corballis is the author of the novels Below (VUP, 2001), Measurement (VUP, 2002) and The Fossil Pits (VUP, 2005) as well as numerous short stories, essays and reviews in magazines, newspapers, literary journals and anthologies. He was awarded the Adam Foundation Prize and a Modern Letters Fellowship for his work in 2000 towards the MA in Creative Writing at Victoria University of Wellington and in 2003 was listed amongst the top ten New Zealand writers under 40 by the New Zealand Listener. In 2002 he was the Randell Cottage Writer in Residence, and in 2005 - 2006 he spent a year in Berlin as the Creative New Zealand Berlin Writer in Residence. He was a judge of the Montana New Zealand Book Awards in 2008. Corballis is currently editing Landfall 216 on the theme of ‘utopias’, working on a novella (possibly the first of a series) which concerns early English psychoanalyst Joan Riviere, and beginning a PhD dissertation on Frankfurt School aesthetic theory in the New Zealand context.

During the conversation sustained in the lead up to this project for The Physics Room, Amundsen and Corballis also collaborated on a series of page works for Enjoy’s recent publication, Public Good (2008). Issues of Public Good will be available via The Physics Room during the exhibition of Si c’est (if it is).