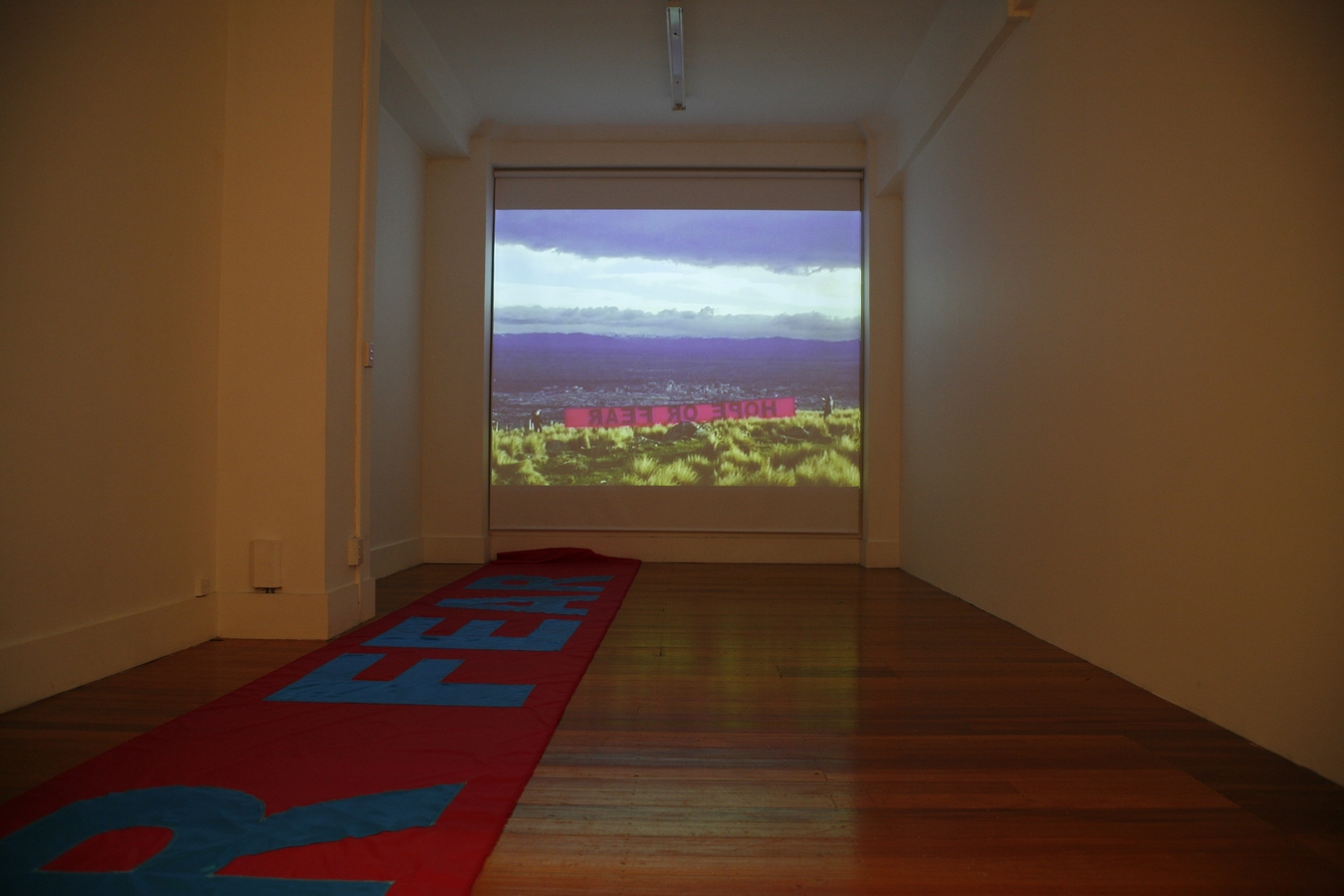 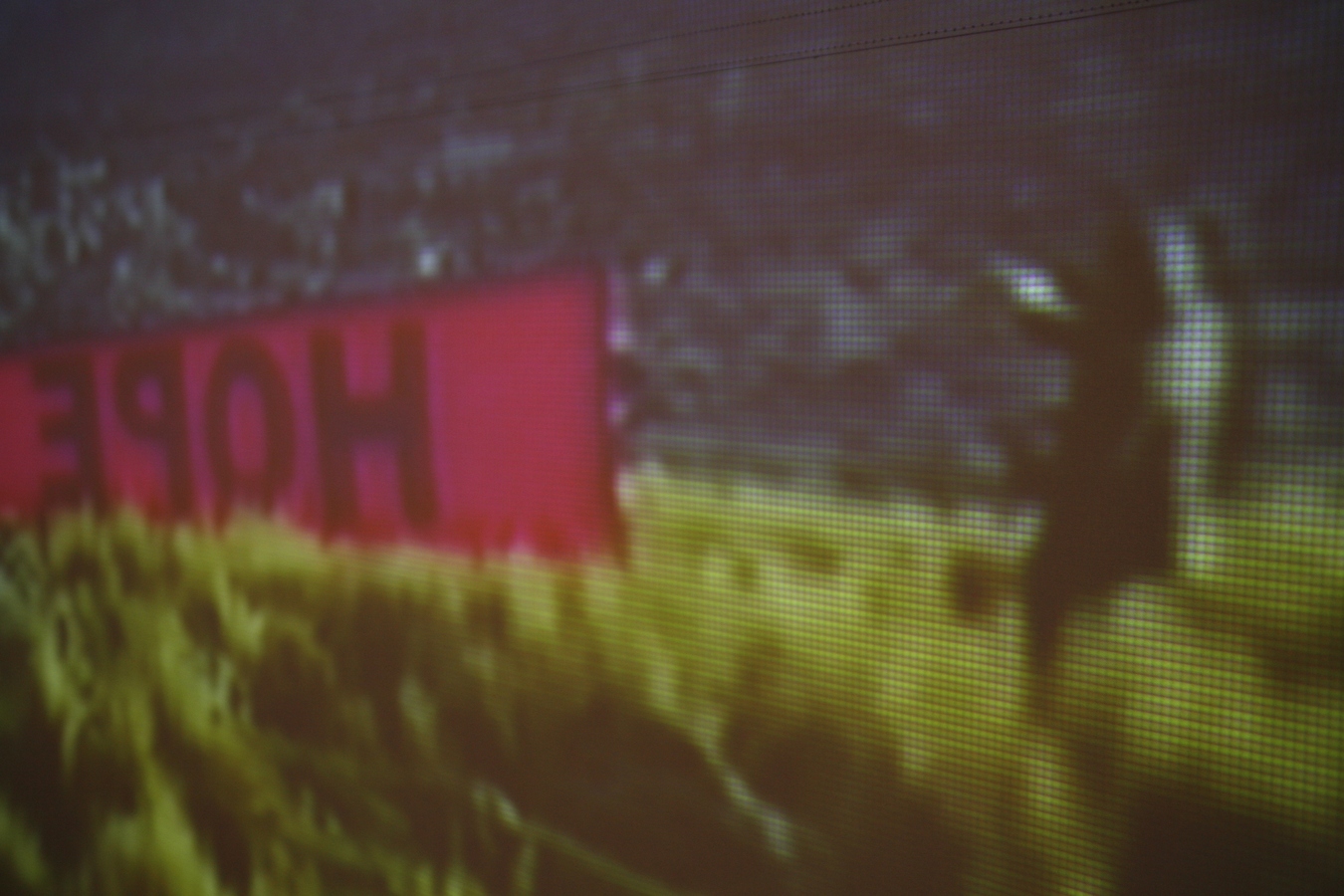 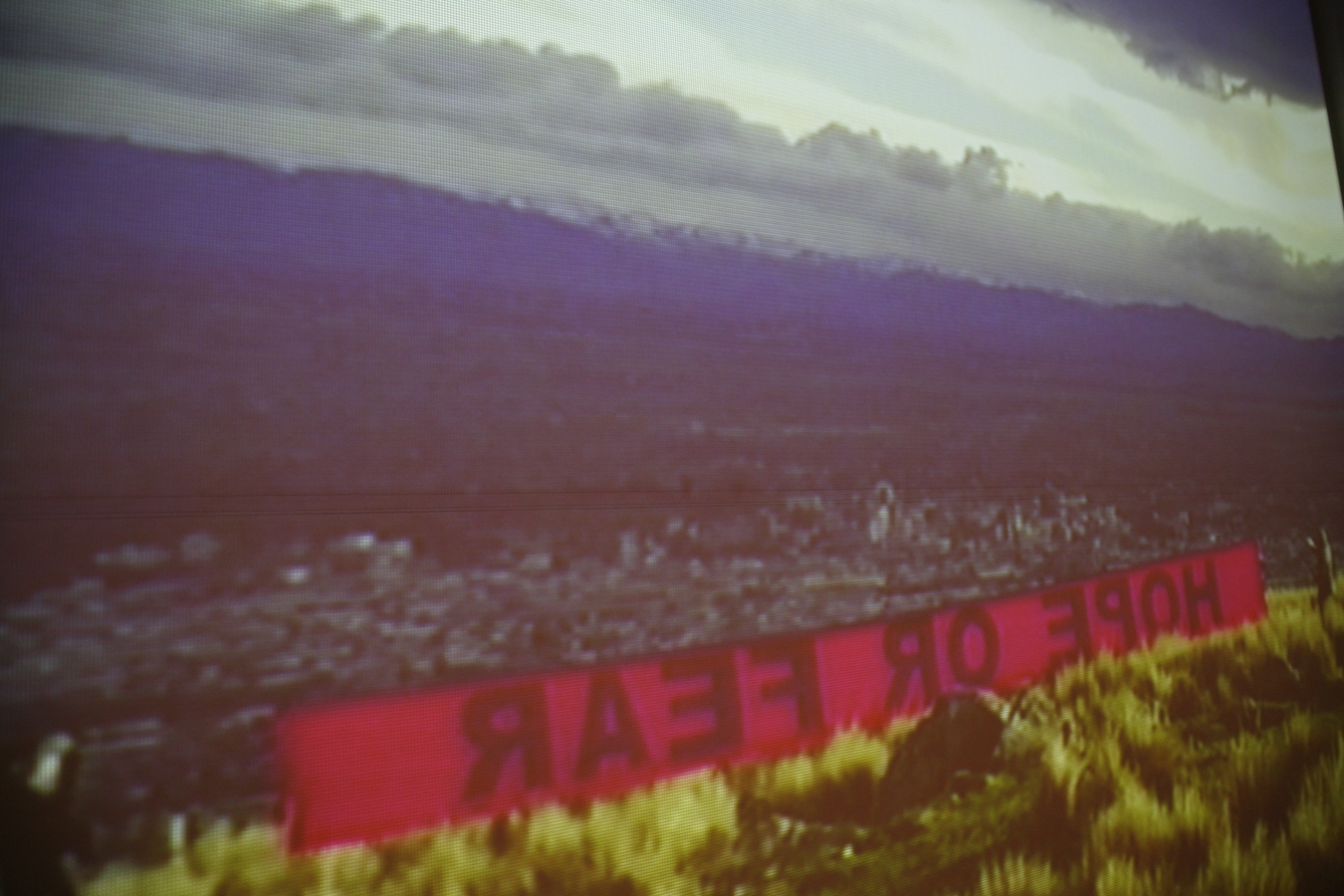 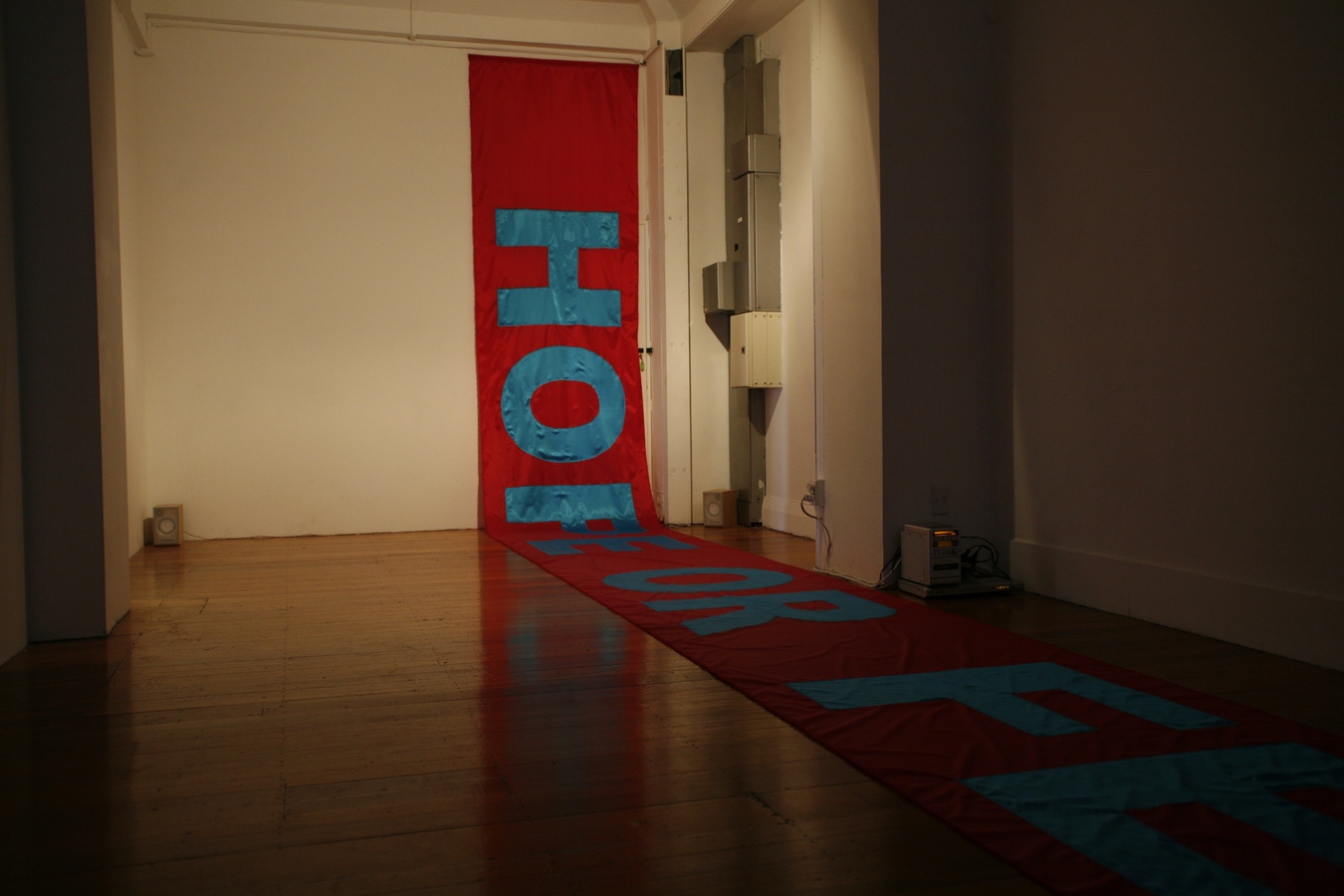 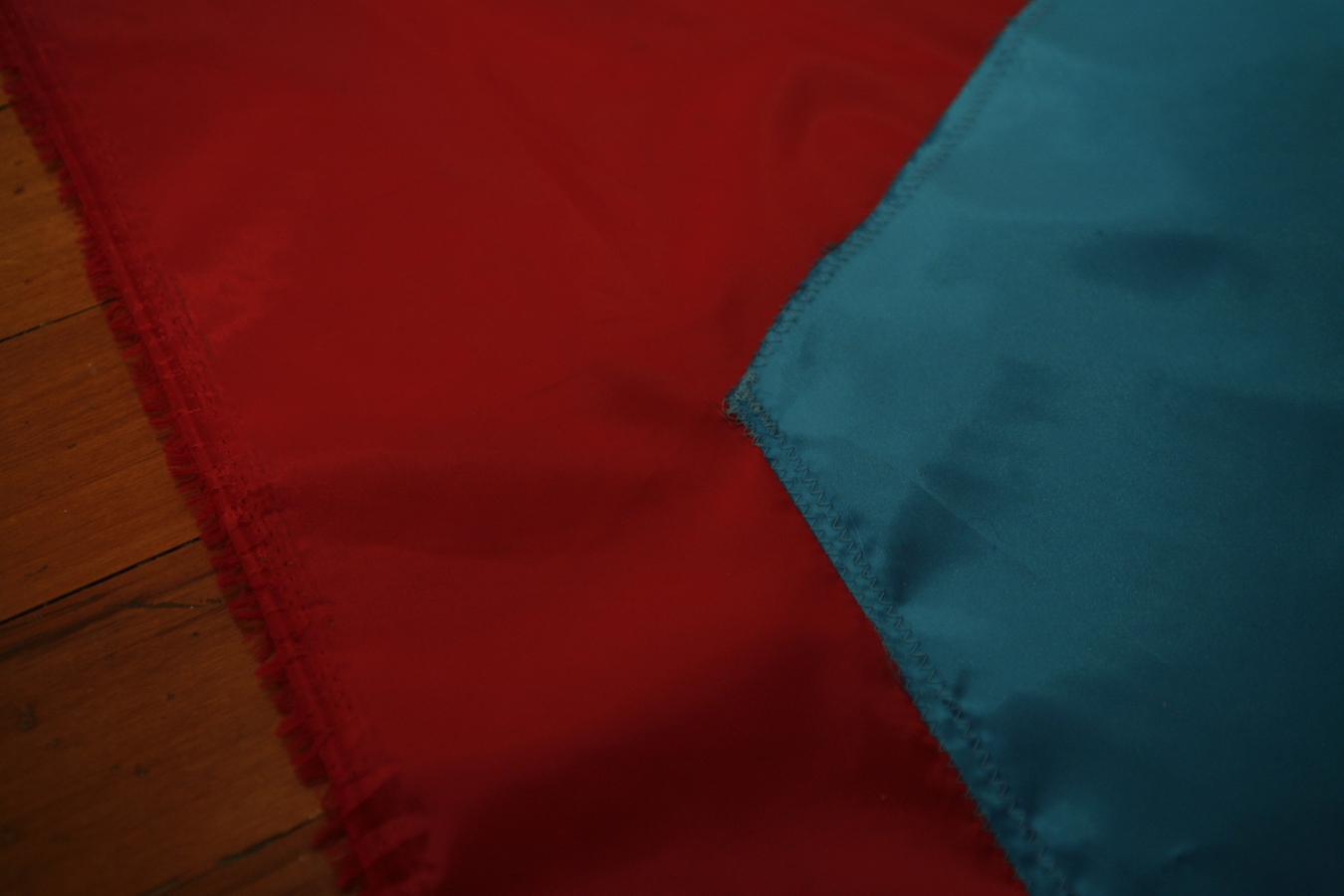 Louise Menzies’ practice has a strong conceptual focus, often melding ideas of duration and action with touches of sentimentality. For her exhibition at The Physics Room, Menzies follows through on such traditions with the light heartedly confrontational and rather romantic act of flying her own message in the sky above us. Taking the ubiquitous form of the banner as a starting point to explore her perceptions of Christchurch, the city she lived most of her life in, here Menzies offers a personal message to the town that once famously failed to host the Dalai Lama after his expressed concern and due refusal to disembark after a strong sense of “bad-vibes”.

Banners surround us; from sports events to protests, from weddings to expos, banners are an ever-present form, boldly communicating a multitude of messages and ideals. Menzies uses the banner for its potentiality as both a communicator and an aesthetic object. From the city’s Port Hills, she documents via video her own airborne banner secured only by strings, floating high above the city. Here the banner becomes the object and message of this temporary gesture from the artist to the city and the confines of the gallery at once. In consideration of her surroundings, Menzies proposition is one of generosity and hope.

Recent projects from 2005 include a conversion on a hotel apartment balcony, a place to gather and watch the city at dusk; and the first Sparkling Duets evening, a series of performances where couples perform music together (which continues this year).

Louise Menzies graduated in 2005 with a Bachelor of Fine Arts from Massey University and has exhibited throughout the country. She has been a board member of Wellington artist-run-space Enjoy Public Art Gallery since 2003 and currently works as the Litmus Projects Manager for the School of Fine Arts, Massey University.