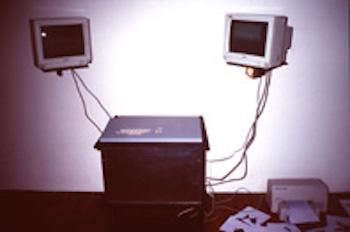 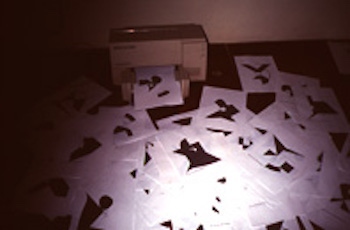 John Fairclough's Semantic Differential is a complex exploration of our conceptions of language, intelligence, and order. Fairclough's interactive computer programme probes the potential of new computer technologies, and the role they might play in developing new forms of intelligence. The computer and monitors that constitute this work sit in a darkened corner of the gallery, a dull lamp illuminating the keyboard. A message on one of the two glowing screens prompts the viewer to input the name of a 'person, organization or institution'. When you respond to the message the computer informs you that it is searching 'The Codex Interlingua' for the term you have entered.

Who or what is The Codex Interlingua? Fairclough intentionally neglects to tell us, hinting instead that his fictitious data suppository is some sort of recognized authority on life, the universe, and everything. Enter "the universe" at the keyboard and the computer emits an electronic burp before an abstract arrangement of geometric shapes appears on screen. Press "p" and you can print out a copy of "the universe" to take home with you. In a chaotic age, The Codex Interlingua satisfies that seductive desire for order - no matter how many times you enter a phrase or word into the computer it will always give you an identical image back in return. Yet a short time spent with the work undermines the initial sense of security this predictability offers. We soon discover that the structures ordinarily governing our use of language no longer make any sense here. This artmaking machine denies us the ability to influence its creative process, instead imposing it's own predetermined and foreign sense of order.

Playing on the paranoid fear of technology that informs many recent films and television programmes, Fairclough's 'analytical machine' suggests the presence of a malevolent intelligence behind the screen. Are our entries really just triggering simple sound/image responses for our entertainment, or are they actually being tracked and indexed by The Codex Interlingua, feeding information back into the system for unknown purposes? The Semantic Differential conjures up science fiction scenarios of mankind's domination by machines of our own making. Remember Hal from 2001, or Mother from Alien? Or how about Proteus, the computerized house in the film Demonseed, which developed self-awareness and the will to reproduce...with humans! A little far fetched perhaps, but still a potent literalisation of Fairclough's potentially virulent creation. In The Semantic Differential our ideas about truth go head to head with chaos, highlighting the inevitability of chance and randomness, and the inherent limitations of any attempt to harness and categorize information.