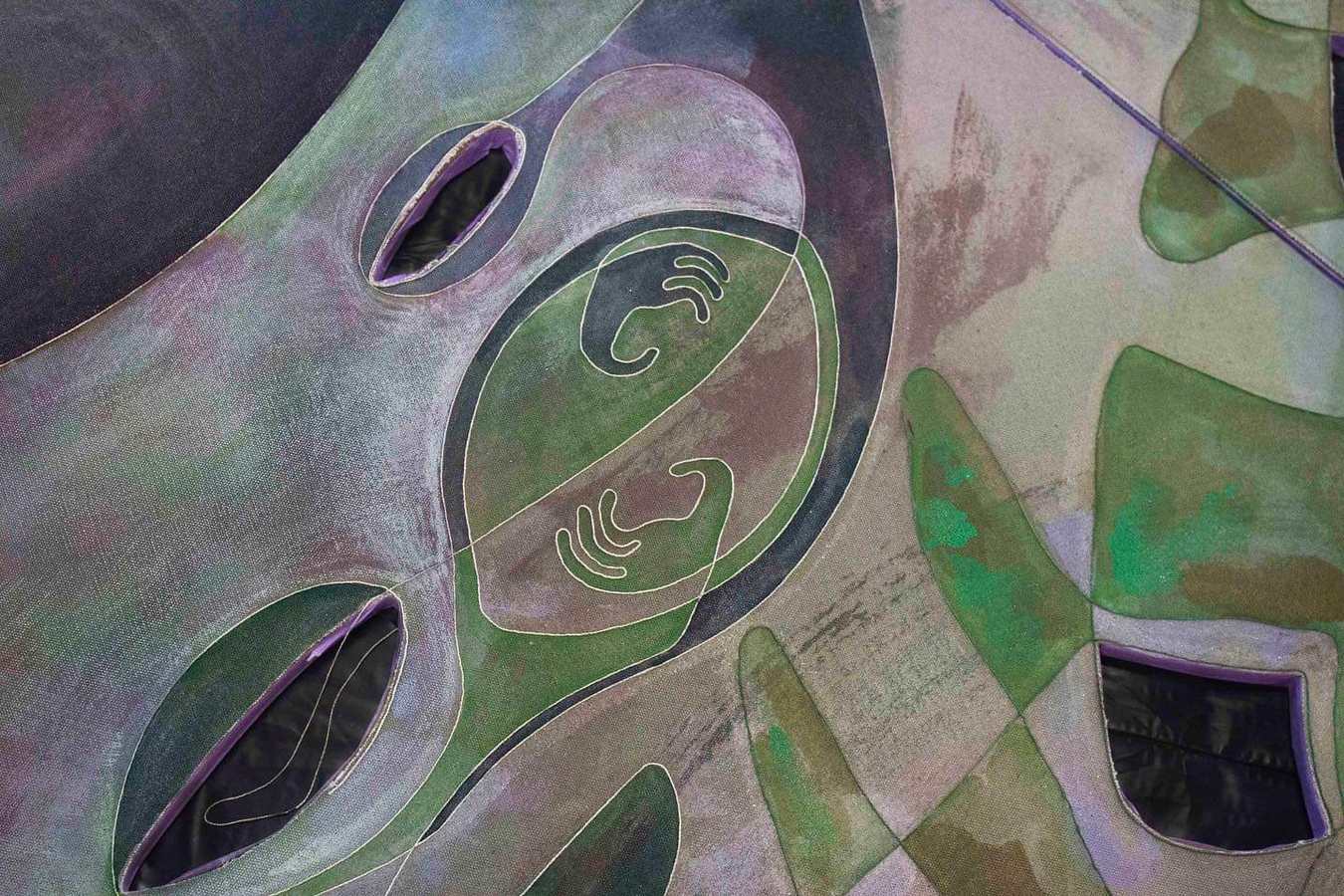 Image: Heidi Brickell, PAKANGA FOR THE LOSTGIRL (detail of work in progress), 2021. Photo by Mitchell McGrath. 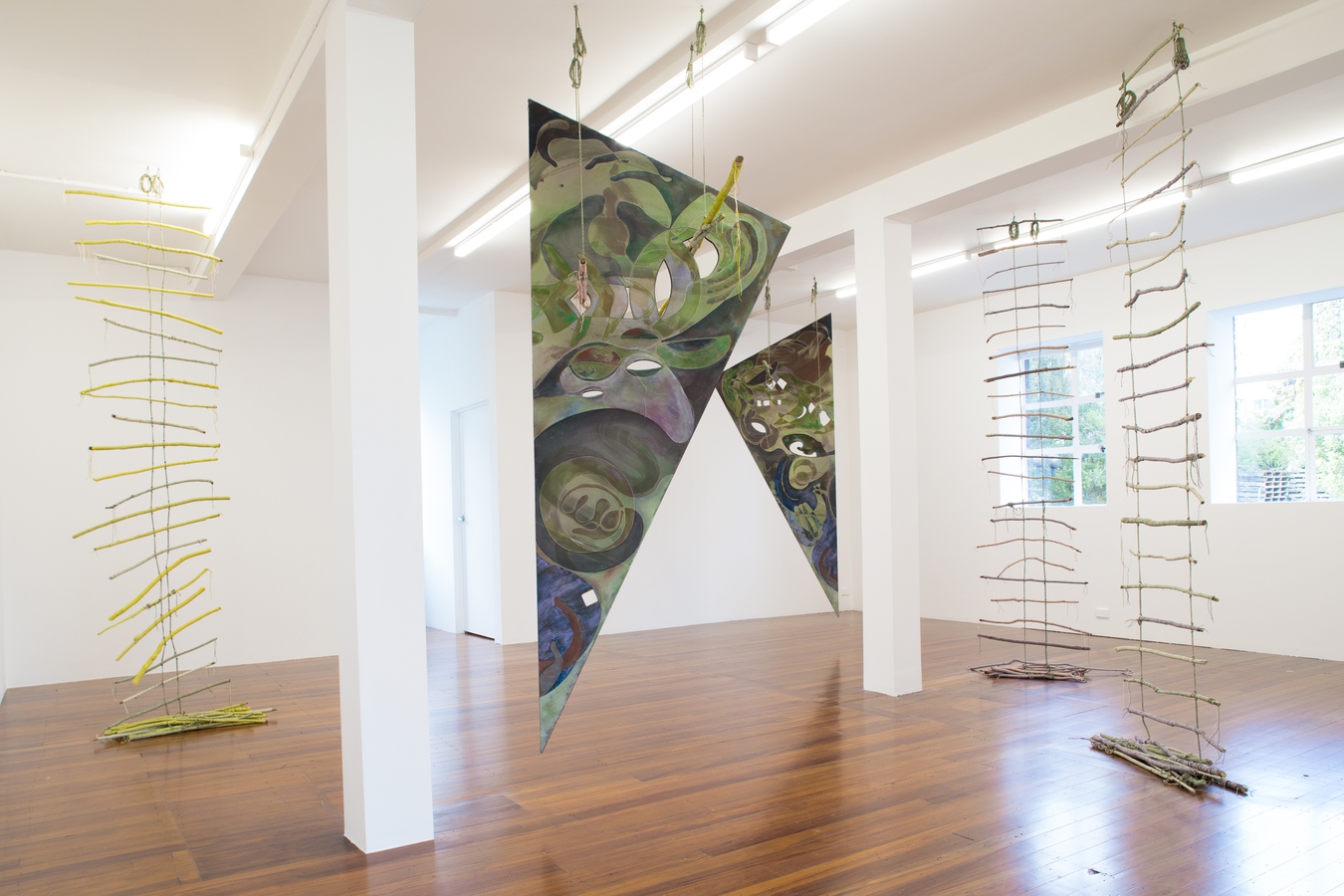 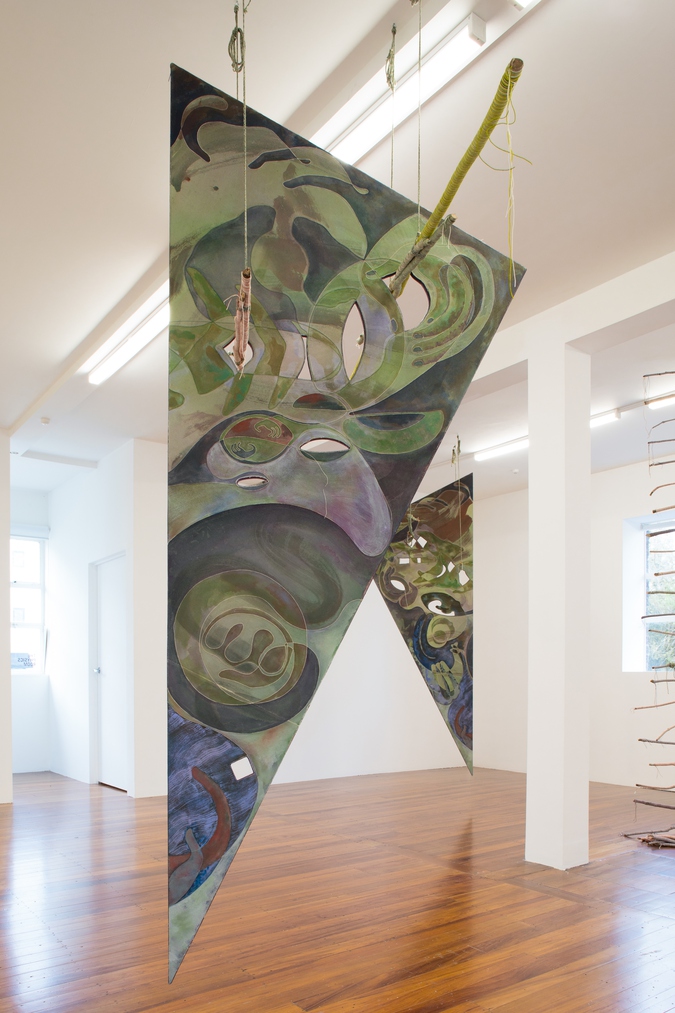 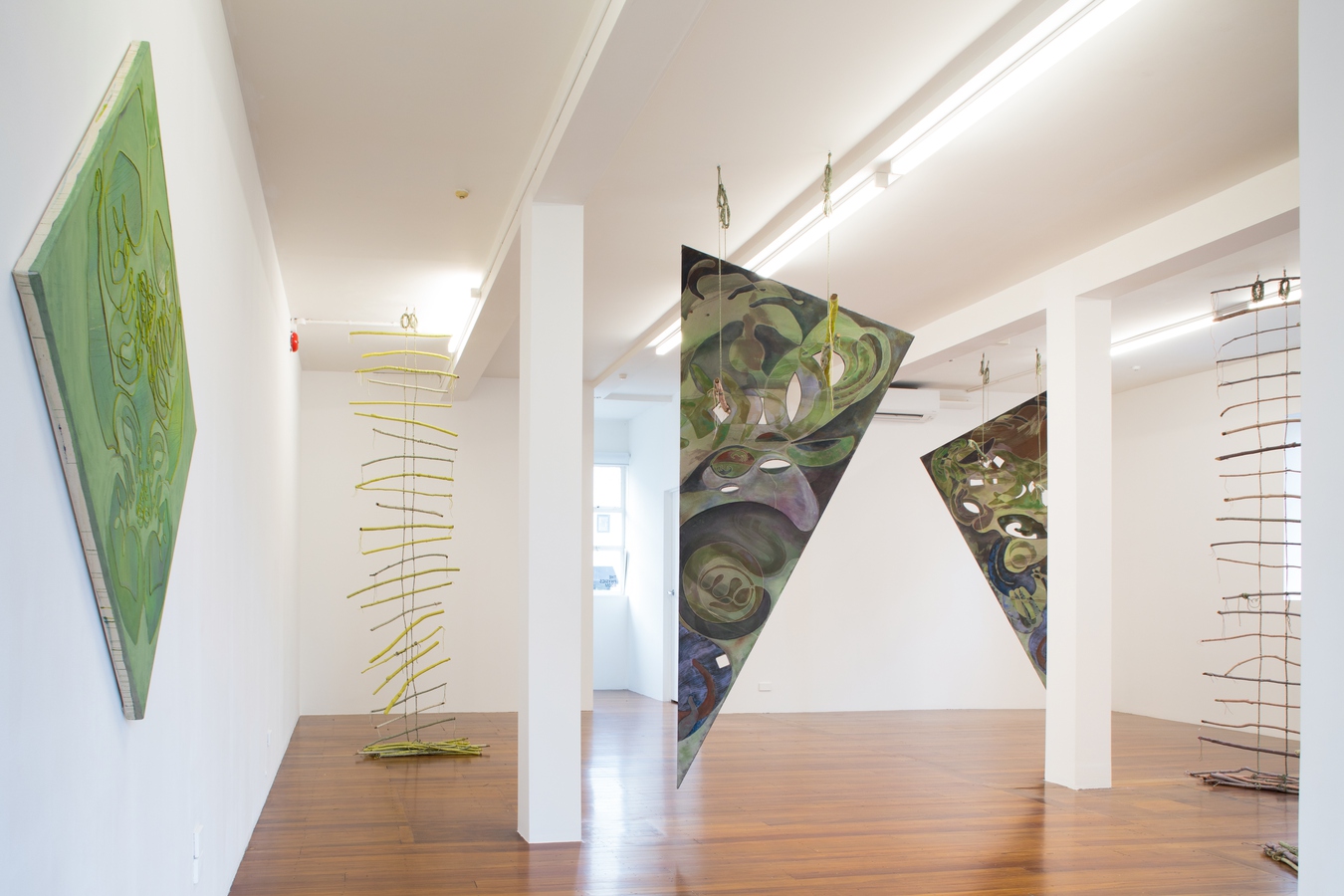 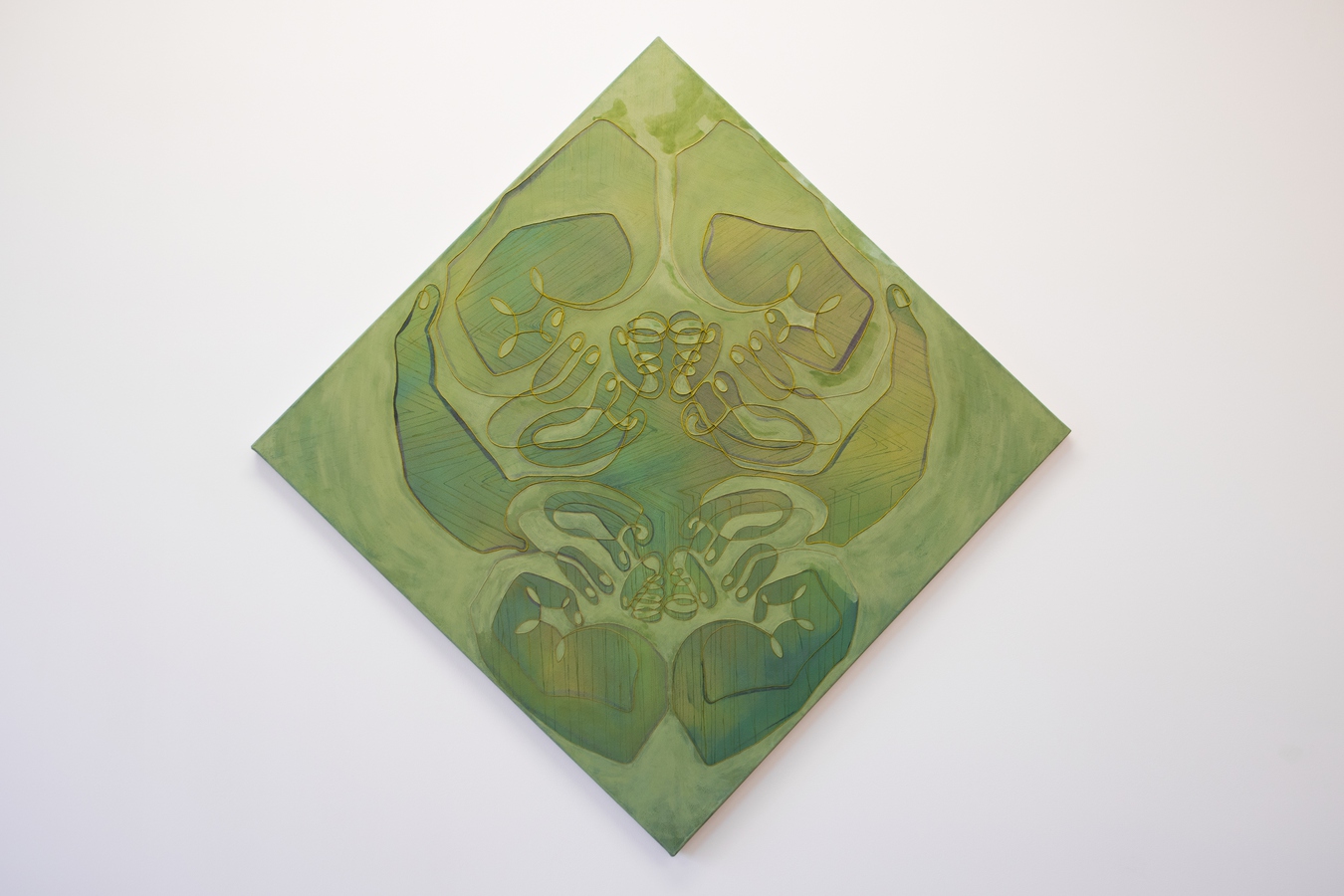 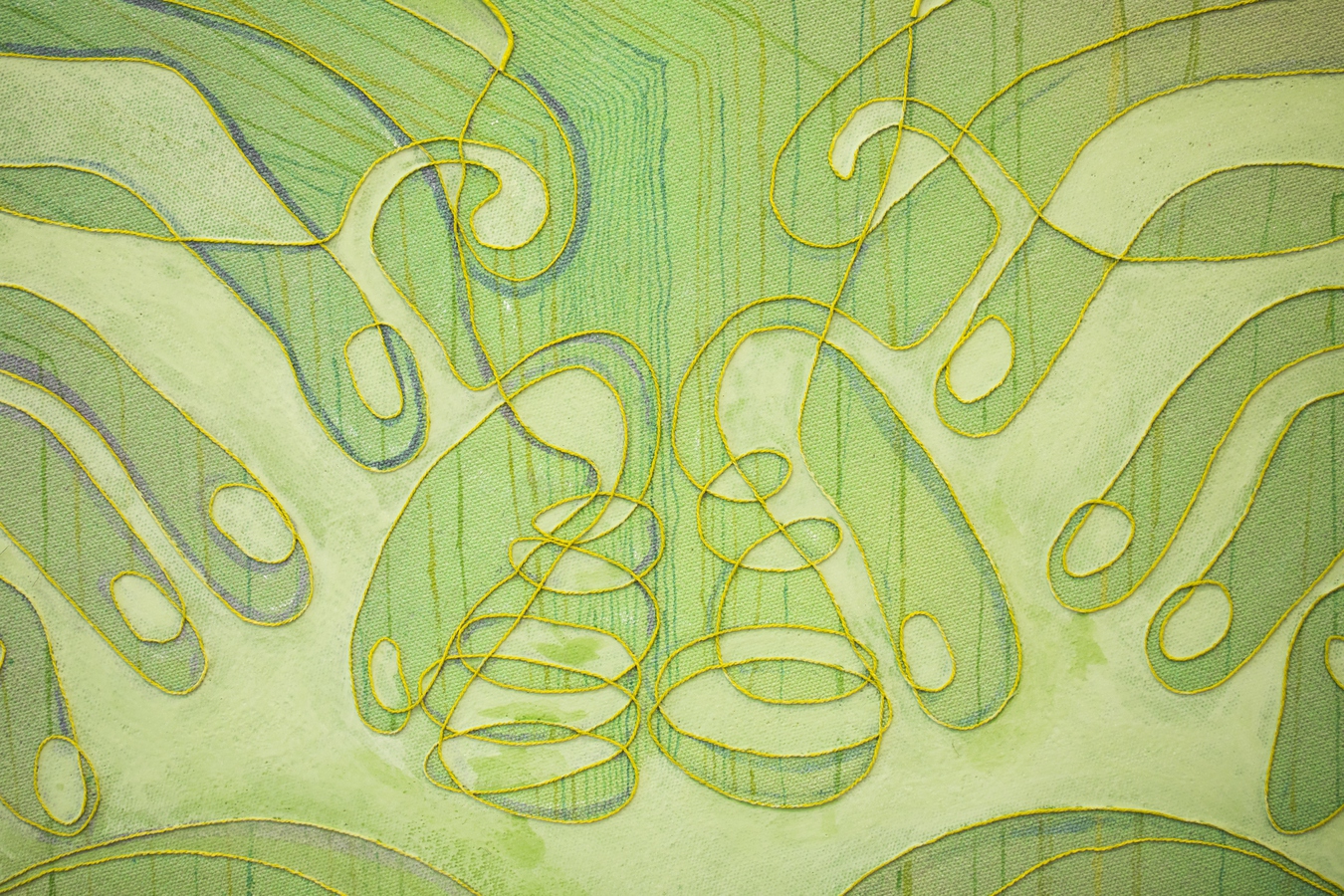 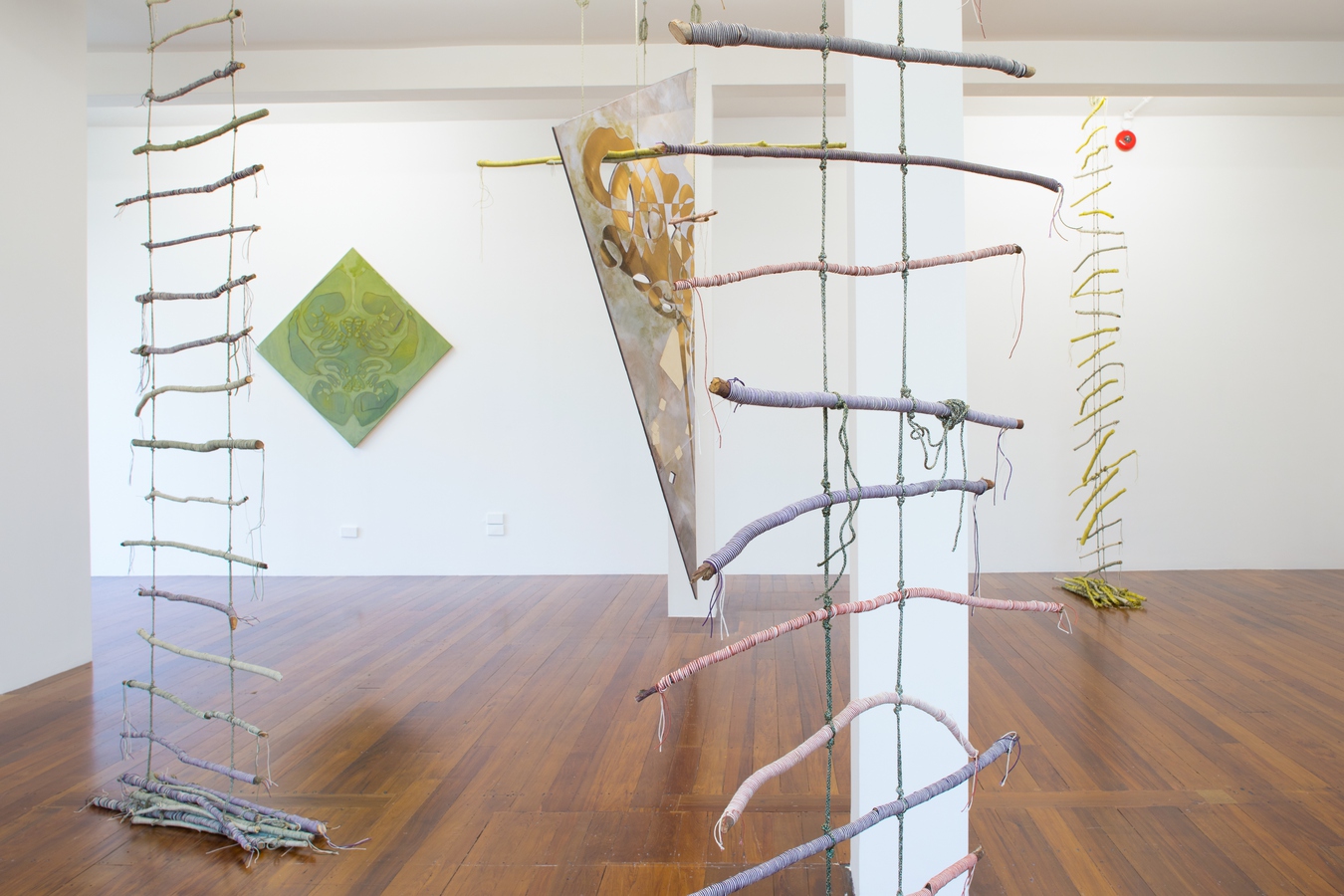 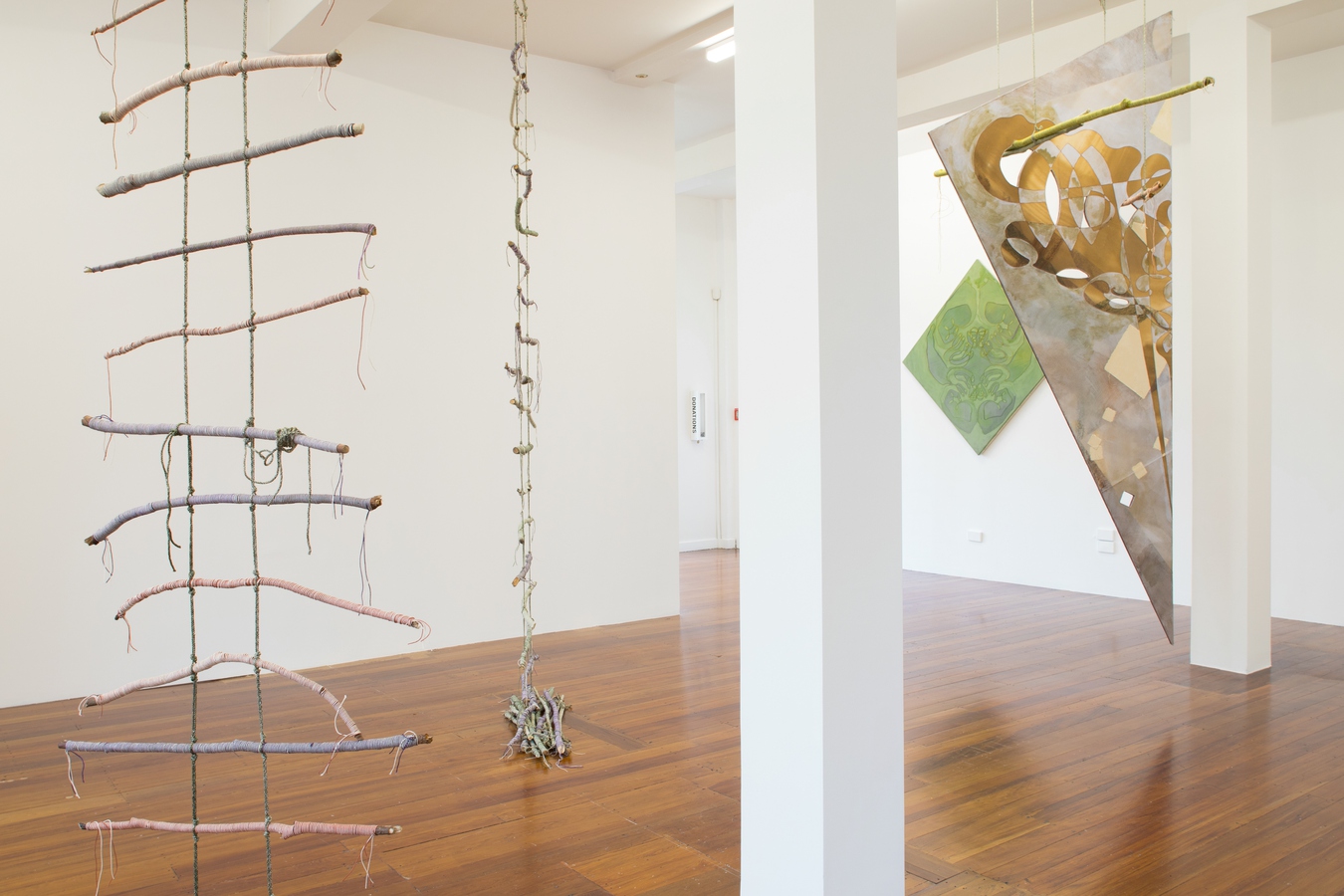 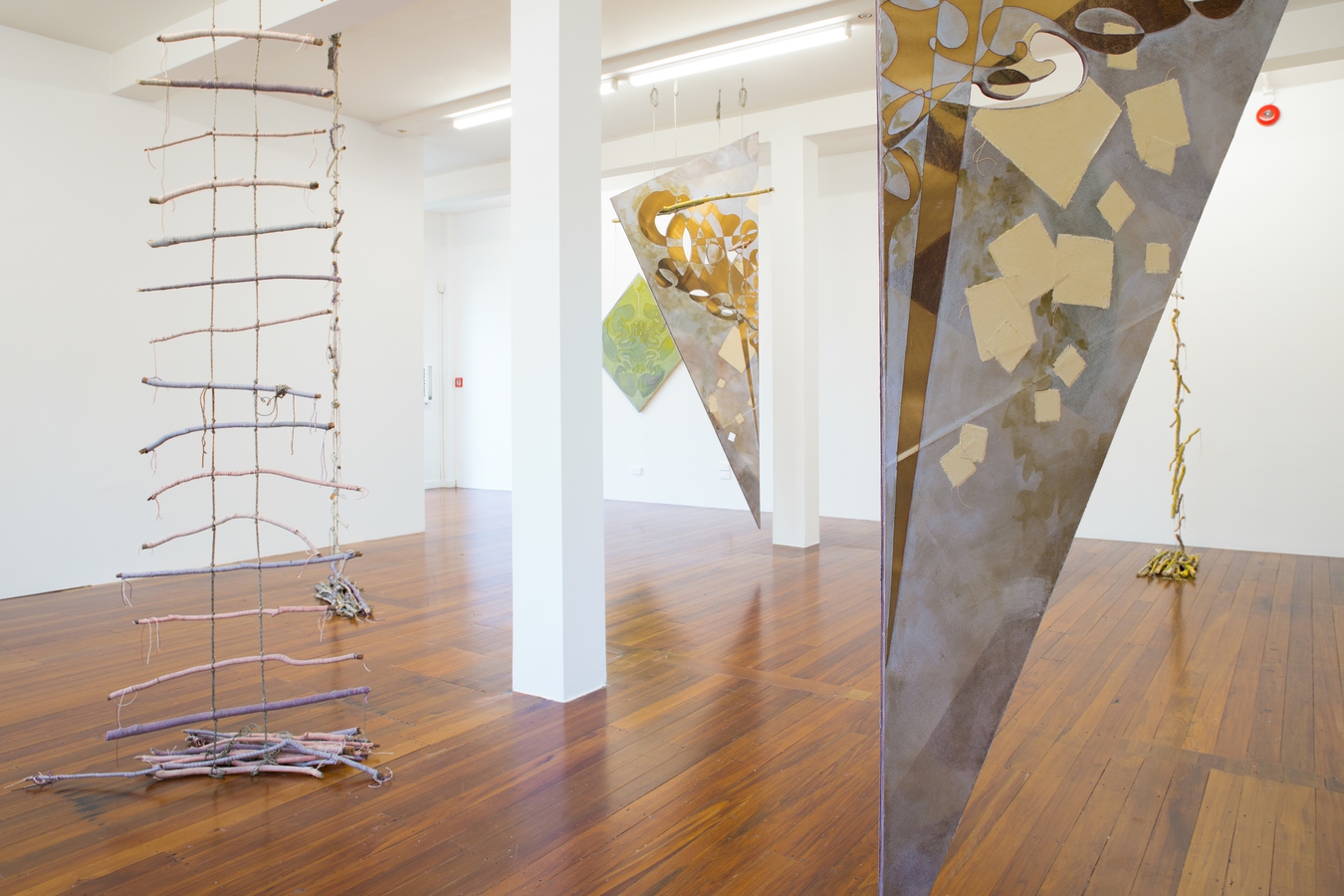 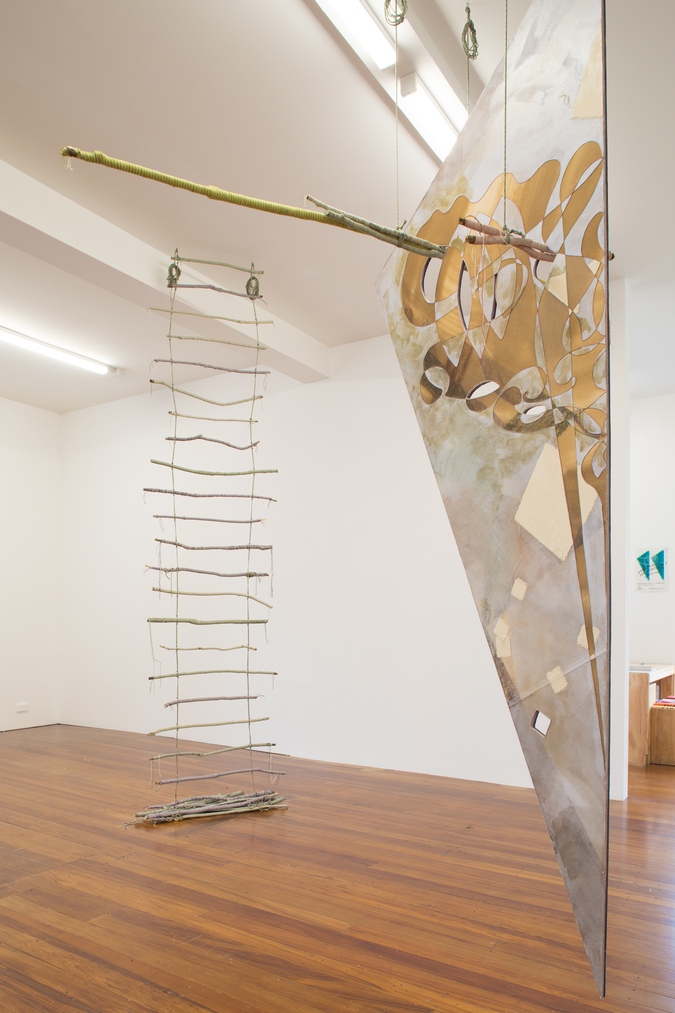 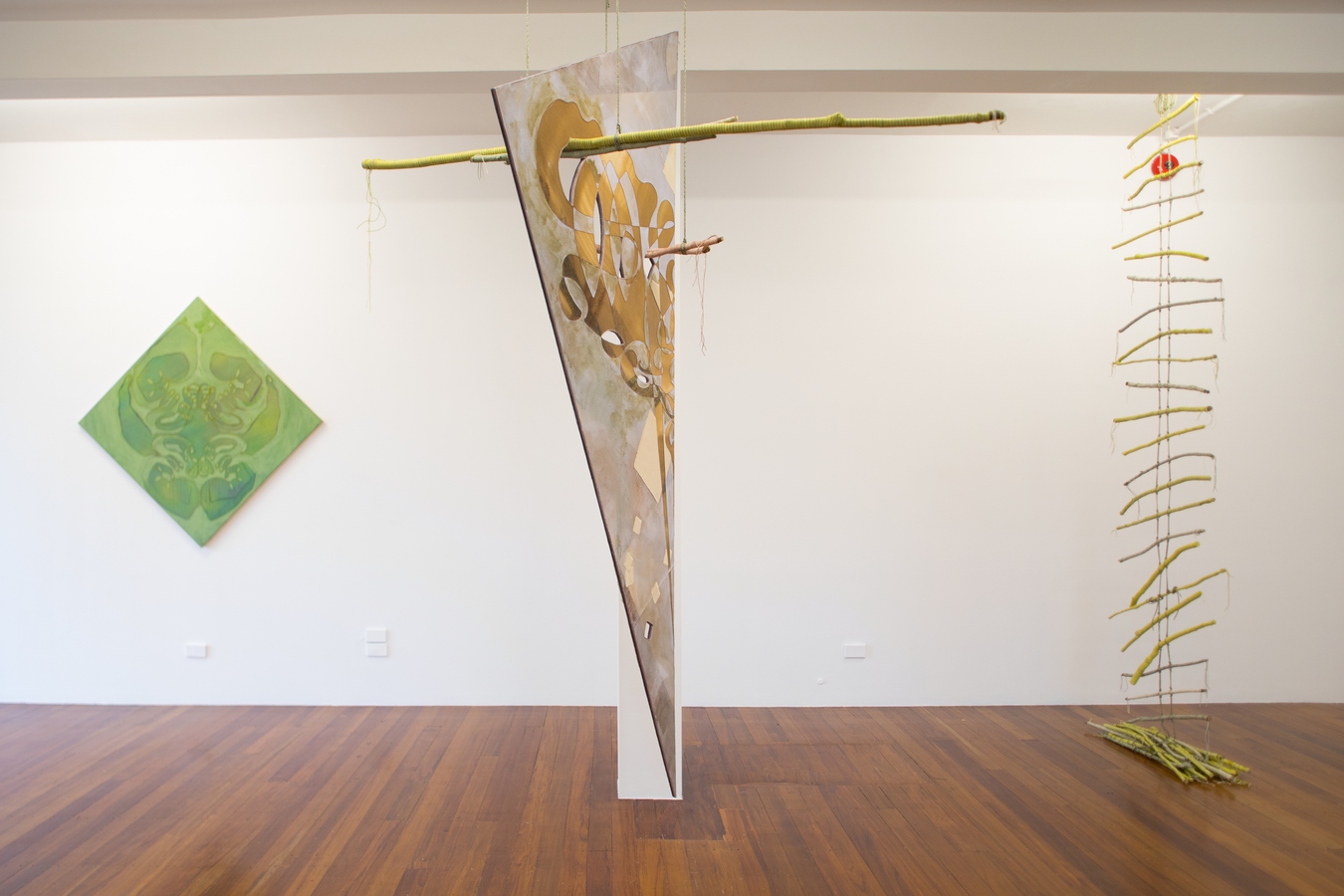 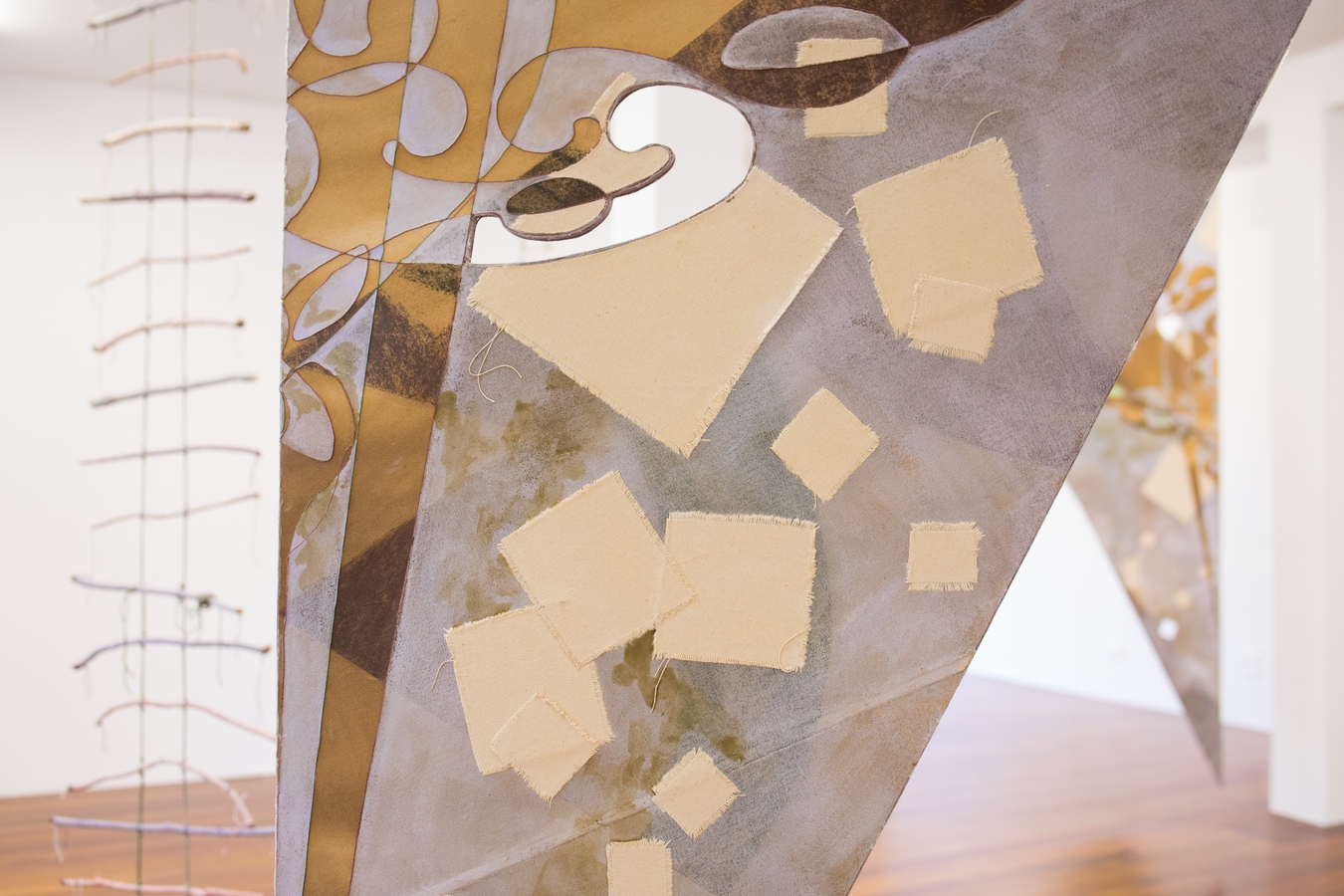 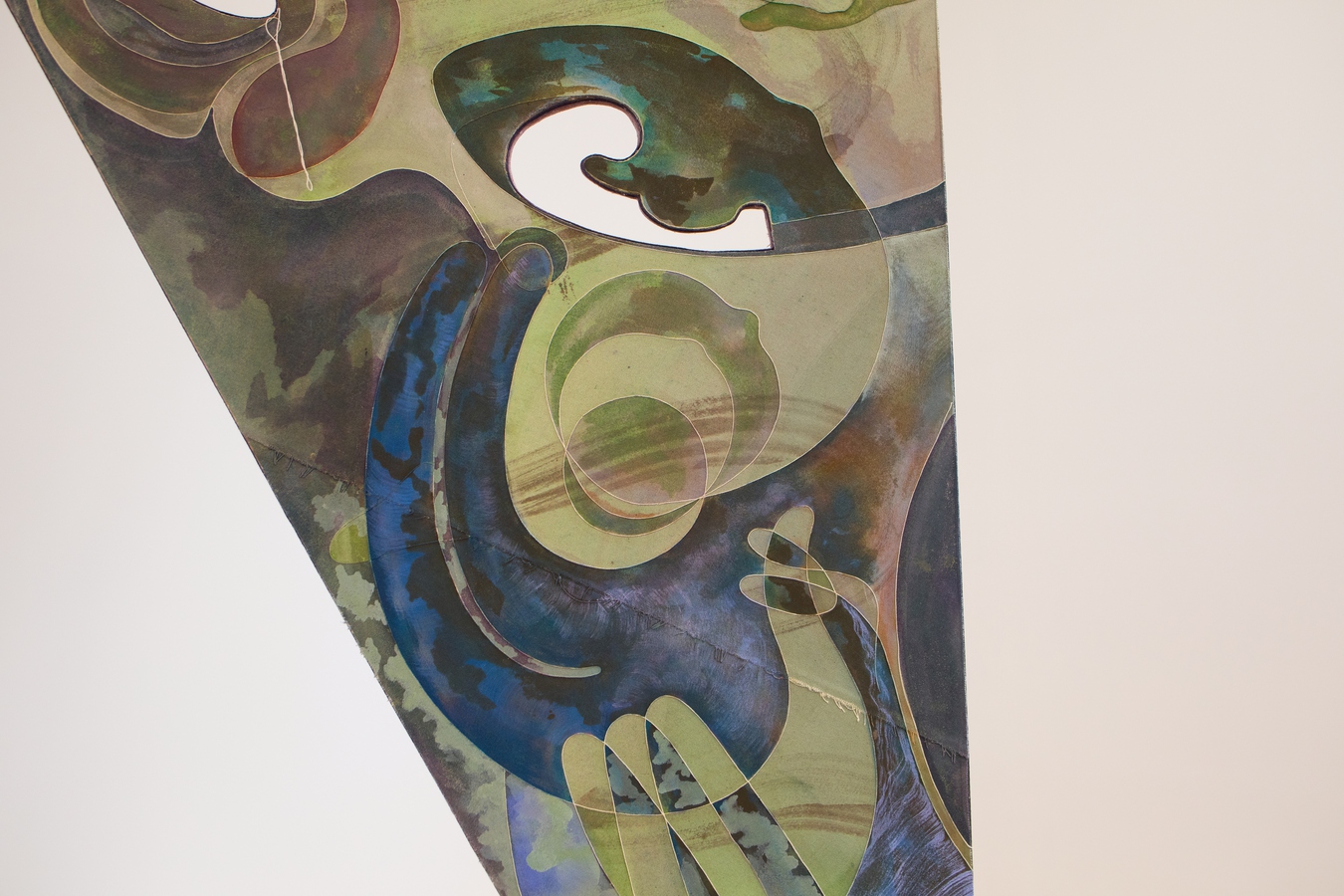 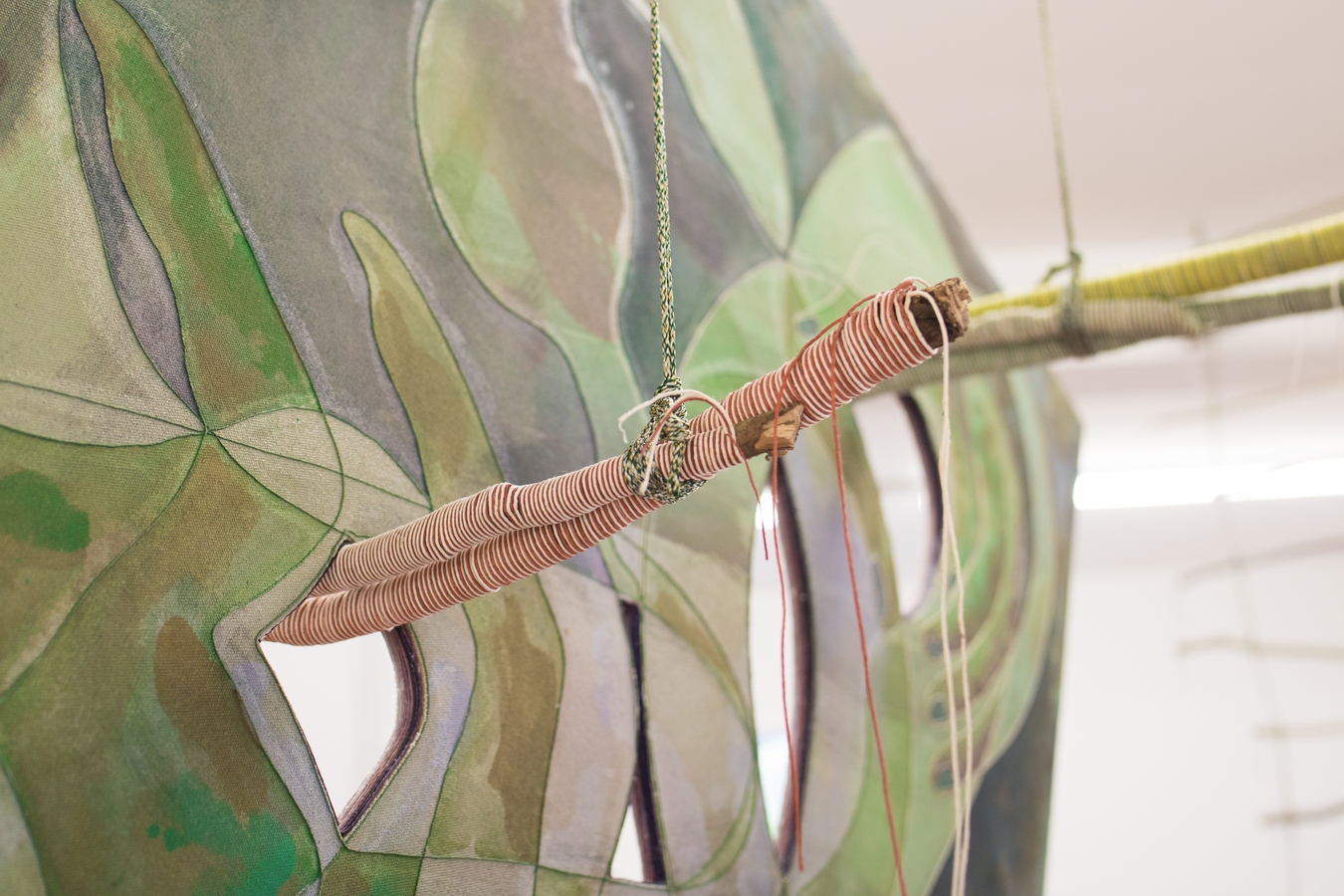 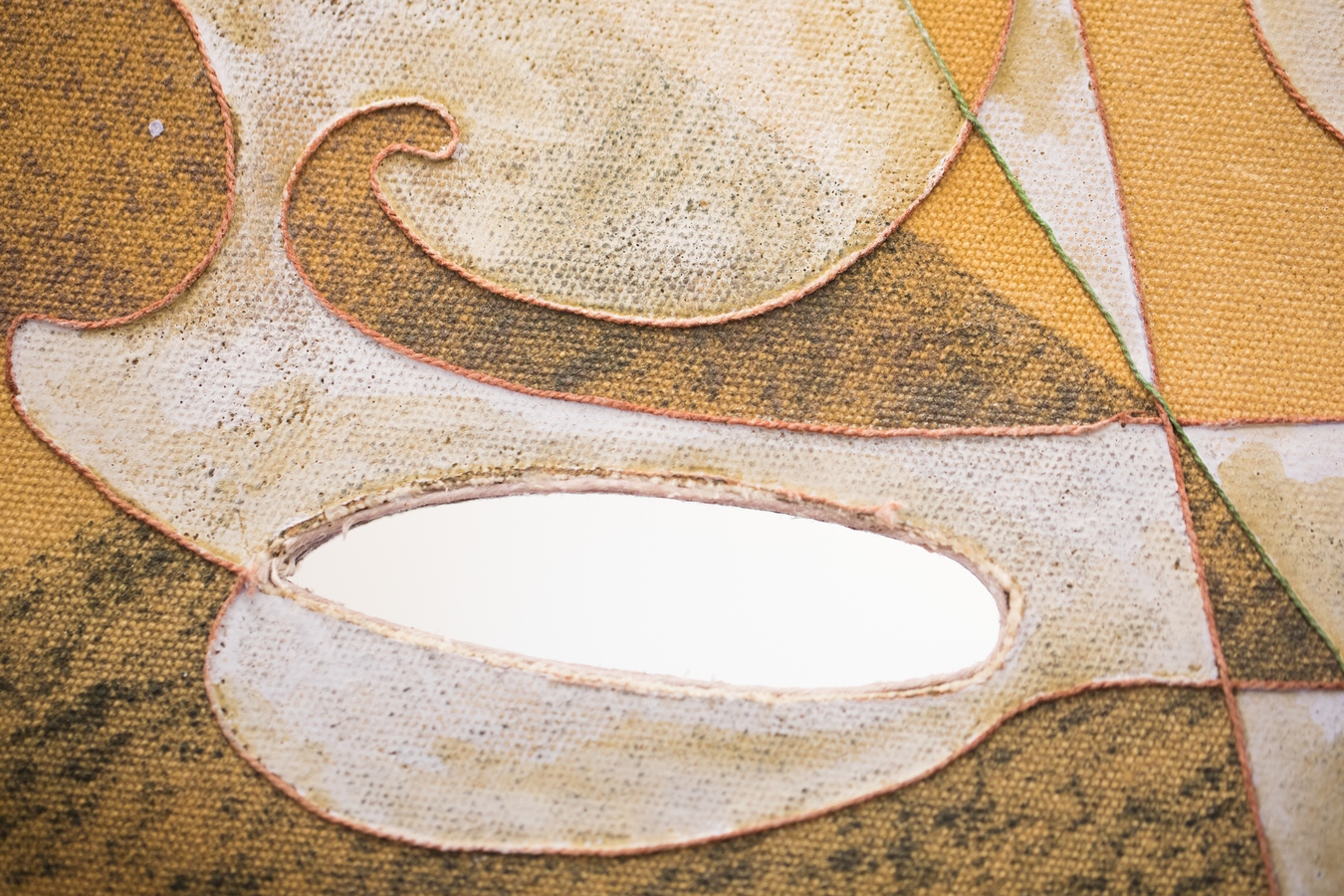 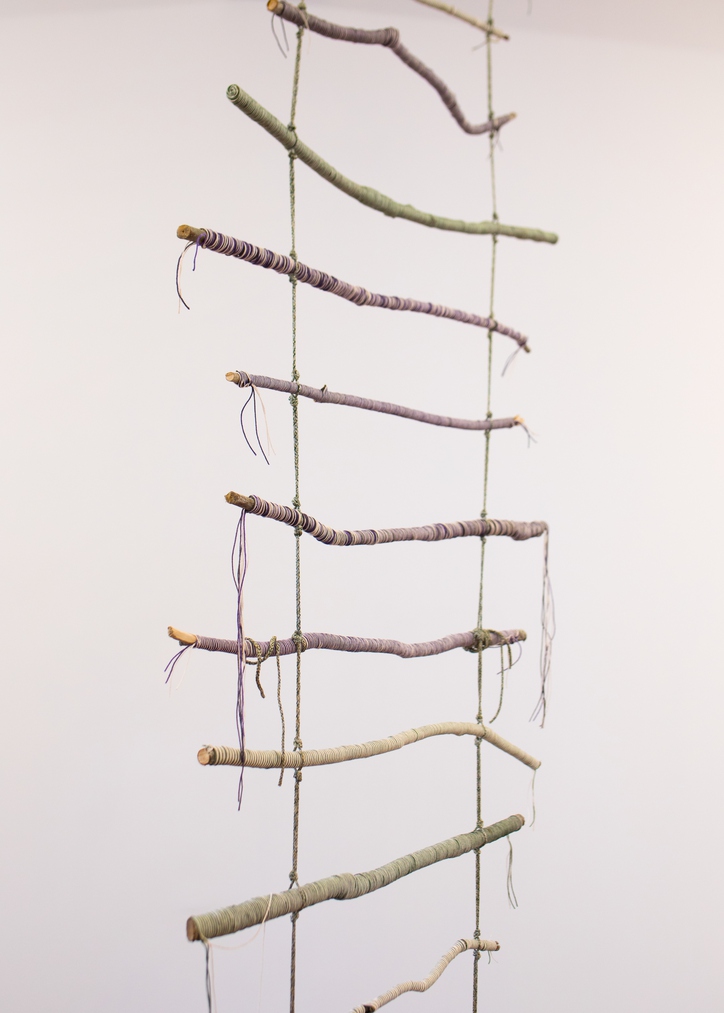 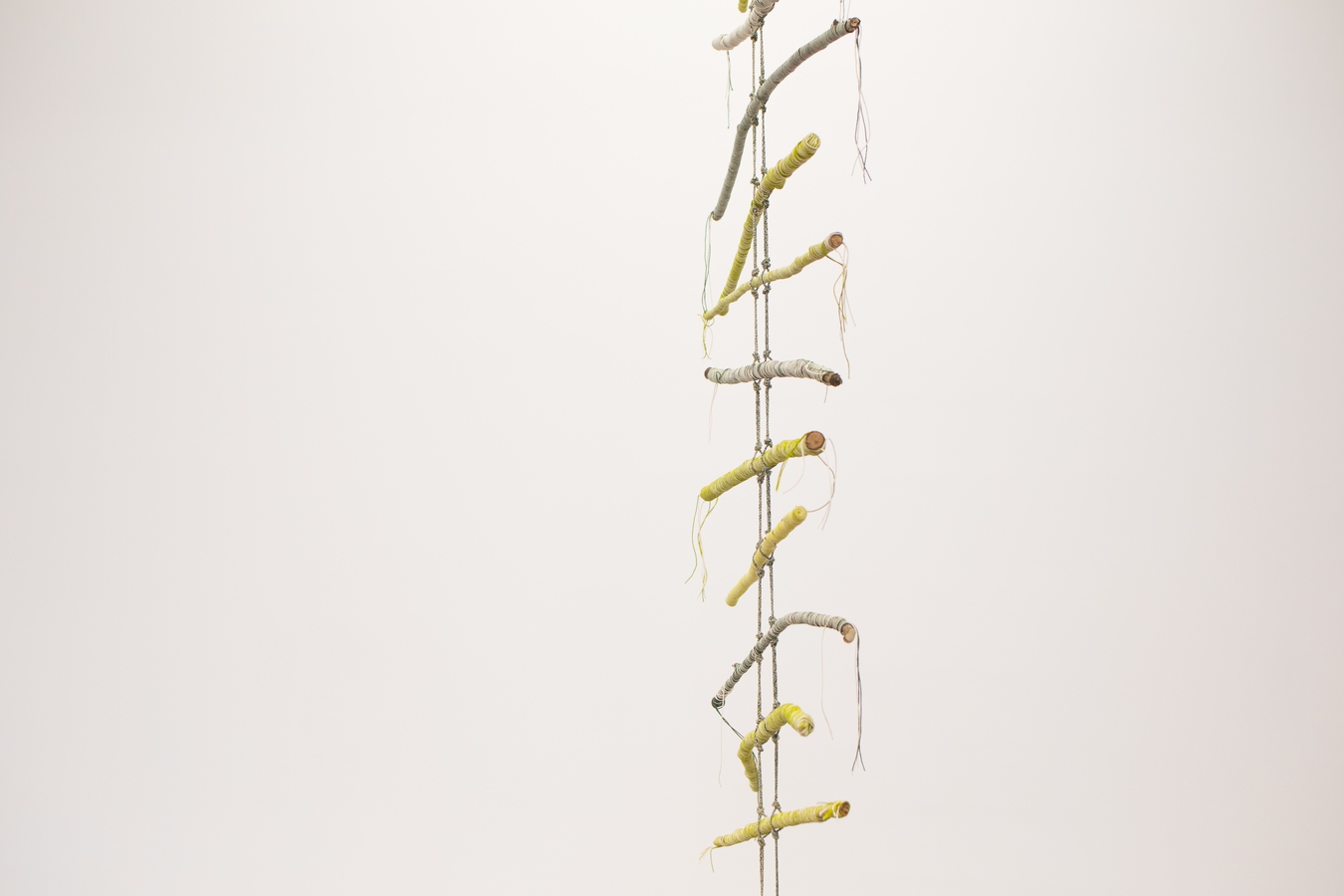 PAKANGA FOR THE LOSTGIRL brings together works by Heidi Brickell (Te Hika o Papauma, Ngāti Apakura, Ngāti Kahungunu, Rangitāne, Rongomaiwahine) in a variety of media: painting, drawing, sculpture, and installation. Brickell’s project is founded on the whare structure1, as a space that synthesises a plurality of languages: visual and oral, metaphorical and spatial. The project is also about our internal landscape, and how this informs the way we engage with the world. Brickell articulates the process of making work as an ongoing wānanga around how we relate to that which surrounds us: as individuals, and within a wider whakapapa.

PAKANGA FOR THE LOSTGIRL was initiated and developed by the artist with Cameron Ah Loo-Matamua, curator at St Paul St Gallery in Tāmaki Mākaurau. Reconfigured for The Physics Room in Ōtautahi, this showing includes another work, Kūtorohia these uaua (2022). This work sits at the threshold of the gallery, large and green as a moss-covered rock. Its title refers to the clenching of muscles, in anticipation of movement: the shift in physical energy that comes with a desire to learn, and with ease of mind. As you enter the space you will also hear Maringi Toa, written by Riki Gooch (Ngāti Wai, Patuharakeke, Ngāti Māhanga Hourua) as a takoha to the project.

Further works are suspended vertically from the ceiling, and reach almost to the floor. Painted on both sides of large triangular pieces of ply, they are multi-dimensional, with bulk, weight, and exposed edges. The picture plane is punctured, washed with pigment, layered with canvas, lined with string and glue, and threaded through with rākau on which the work is balanced. A series of ladders, each rākau ‘rung’ bound with cotton, beeswax and glue, also connect ceiling to floor. These works compel the viewer to move into one line of sight, then move again to another, so that the act of looking involves the whole body. At the same time, the gallery space itself comes to feel like a prism: allowing certain angles or staging certain experiences of light.

Visual languages evolving alongside the spoken language of te reo Māori continue to influence Brickell’s works. Specifically, she speaks about Ihenga, the whare whakairo carved by Lyonel Grant for the Waiariki Polytechnic in Te Arawa, as having a significant impact on her thinking. Whakairo enables the mind to travel between past and present sensibilities in a way that is non-linear; Brickell notes, “...the way a whare tipuna functions as a sort of a psychological space, albeit a shared, communal one, is something I’m figuring out in my personal practice. How art can reflect an authentic mind-space, for someone living simultaneously in Māori and Pākehā worlds.”

Thinking about language, translation and transformation, is also foundational in this work. The exhibition’s title, PAKANGA FOR THE LOSTGIRL, makes reference to te hinengaro, translated from Māori to English as ‘mind, heart, consciousness, psychology, spleen’ (P.M Ryan, 1995), or mind-heart continuum. Held within the Māori kupu are the words for ‘girl’ and ‘lost’. These are images that the artist continues to reflect on in relation to living within two languages: what is transformed, what is lost, what continues to wear and change through use over time. In Brickell's research for this exhibition one focus was the etymology of the word hinengaro, tracing it in conversation with tangata-moana through a whakapapa connected to Sāmoa (finagalo), Tahiti (hinaaro), Marquesas (hinenao), and other motu.

A further act of translation can be found in the works’ surface forms, in which she brings together interpretations of tohu Māori with an invocation of formalist geometric abstraction. Brickell describes this approach as a “copulation of ariā”: a space of engagement where ideas proliferate.

1 Within te ao Māori the whare takes many forms, such as te whare tipuna, te whare tangata, te whare tapawhā, all of which speak of the cultivation of connections (whakapapa).

Heidi Brickell (Te Hika o Papauma, Ngāti Apakura, Ngāti Kahungunu, Rangitāne, Rongomaiwahine) lives and works in Tāmaki Makaurau. Recent solo exhibitions include Alluvial Hours at Laree Payne Gallery, Kirikiriroa (2021), and Floundering Arms Swallowed by Pendent Whenua at Paludal, Ōtautahi (2021). She was also in Outgrowth alongside Salome Tanuvasa at Mother¿ (2020), and Nine Māori Painters at Tim Melville Gallery, both Tāmaki Makaurau (both 2020). Brickell was the 2021 recipient of the Molly Morpeth-Canaday Akel Award. In 2011 she graduated with a BFA from Elam School of Fine Arts, The University of Auckland.

This text was adapted from an original written by Cameron Ah Loo-Matmua.

PAKANGA FOR THE LOSTGIRL was commissioned by Cameron Ah Loo-Matamua, for St Paul St Gallery, AUT, Tāmaki Makaurau, 6 May - 23 June 2022. Kūtorohia these uaua was originally made for Whānau Mārama, curated by Jade Townsend at Season, Tāmaki Makaurau, 2022. It is proudly hosted at The Physics Room, Ōtautahi, as a Te Waipounamu venue.