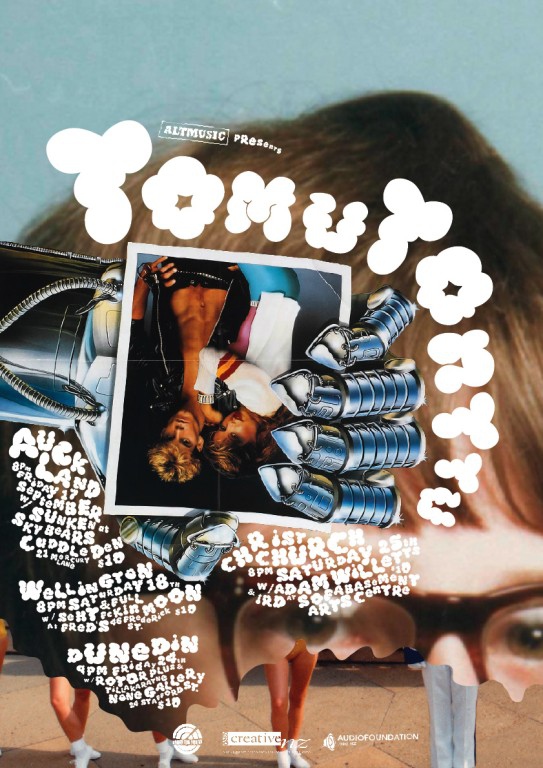 Tomutonttu is the solo project of Jan Anderzén, a visual artist and musician from Tampere, Finland, whose pivotal role in Kemialliset Ystävät and collaborative raids in Avarus and Anaksimandros has—alongside Fonal label colleagues, Es, Paavoharju, Kuupuu, Islaja, Fricara Pacchu, Lau Nau and Shogun Kunitoki—elevated the Finnish experimental underground into a Renaissance-like state, its cross- pollinating telepathy producing some of the most acclaimed records and performances since the mid 2000s, while setting a universal example for communal musical exploration.

The most prolific of the Fonal stable and its related tributaries, Anderzen’s music has also appeared on labels such as Ultra Eczema (Lucky Dragons & Yacht, Orphan Fairytale, Wolf Eyes), Fat Cat (Animal Collective, Black Dice, Múm), Dekorder (Richard Youngs, Xela) Lal Lal Lal (The Skaters, Javelin, Keijo), Jewelled Antler (Skygreen Leopards, Steven R. Smith) and Imvated/Taped Sounds Christina Carter, The Futurians, Ignatz, Thurston Moore, Magik Markers). In 2008, Anderzén toured and recorded on the Approximately Infinite Universe Tour. A Caravan of Raw Sound Magic from Finland and the US, with Blevin Blectum, Axolotl, Sumara Lubelski, Fursaxa and members of The Skaters and No Neck Blues Band. He has also held workshops and played a series of concerts for school children at the planetarium of his hometown.

Anderzen’s wraithlike powwow, weirdo choral ascents, elated bleeps, bubbly glossolalia and poltergeist thumps coalesce in a captivating sylvan kaleidoscope of psych hyperbole in all his projects, but it is live, in his solo incarnation as Tomutonttu that these magnetic qualities are best articulated. As unassailable blog, Mutant Sounds has described, Tomutonttu is a 'delightful traipse through a verdant forest of ergot poisoned art brut psychedelic deconstructionism; all wobbly string fumble, lobotomized key wheeze and detuned flute toot that’s wonderfully right in its ungainly "wrongness"'.

Adam Willetts is an artist and musician from Christchurch, who has exhibited and performed in new Zealand and abroad. His work makes use of homemade synthesizers to produce a gloopy, castle-building kosmische pop. He has appeared in performance and exhibition alongside Marco Fusinato, High Places, Dan Deacon, Ducktails and John Wiese. Recent releases include 'live (lines of flight 2009)' on Fictitious Sighs, and 'In Wondrous Dimensions' on Dungeon Taxis.

Established in 2001 and now organized by committees in every major city in New Zealand under the Audio Foundation, Altmusic is an ongoing series of audio events, regularly bringing a vital injection of contemporary and experimental music from around the world to New Zealand. This year, the programme has continued with each city curating its own event and touring this around NZ.