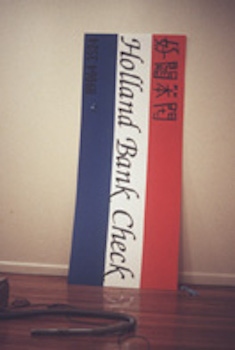 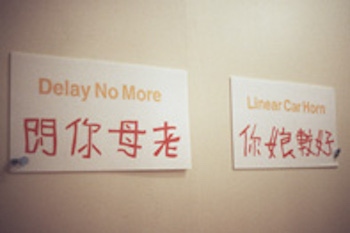 Daniel Malone is an artist of Cherokee descent. Like many American Aboriginals (Red Indians) he has recently been exploring an Asian heritage. One point of departure for this exploration is pre-historic and dates back to the last Ice-Age when the first peoples crossed from North East Asia over the frozen Berring Strait and into North America.

The work in this exhibition is for the Asian Community literally in the sense that it speaks to them. All of the English language in the work exists only as a phonetic version of the Asian language (this is also called Romanisation) and as such operates as a code or a sign that resists or even misleads a Western understanding. All of the examples in the work are in living use. Some can be found in Hong Kong Cinema as a way around repressive censorship laws, when a phrase cannot be used in Mandarin or Cantonese a phonetic version in the English language is employed. This employment is the key, the English language is drained of its original meaning and its body possessed to walk around "codes of behaviour that stand in the way of the infinite possibilities of expression".

Other works make use of number codes most commonly found on the personalised plates of Asian drivers (these remain impersonal to the Occidental eye), and in phone numbers. All of the signs articulate a language that moves beyond a simple hatred of The West and speak of the blinding eclipse of the Occidental by the Oriental. These are signs not concerned with the tautological roles given to them in the great nations of the west, but with what it might mean to be Public Enemy #1 in the same nations. In short these are works illuminated by the sun rising in the East and are not concerned with the dying of the light setting in the West. All signs are made by the artist with vinyl cut lettering and core-flute board (real-estate signage materials). The sculpture titled 'My sUzi Weighs a ton' is made with the mechanism used for Lazy Susans commonly found in Chinese Restaurants and a mirror scraped clean of its silver. It was constructed during the opening nite performance, titled 'Foul Weather' where the signs were briefly translated using speech balloons. Mangoes originate from India.