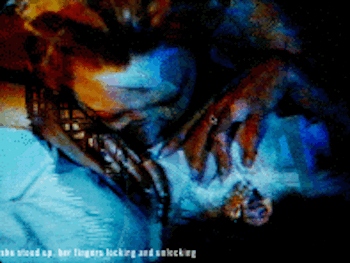 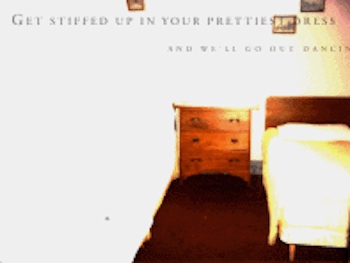 Missing is a collaborative project by Mediatrix / Seductor Productions, originally developed as a touch-screen installation for the Artspace exhibition Electronic Bodyscapes.

Photographs, text, sound, drawings, video and film stills have been recontextualised as narrative threads which reference and link to one another in response to the user's actions. Navigation of Missing has been intentionally designed to induce feelings of dislocation, offering glimpses of meaning in a coherent world which nonetheless refuses 'mastery' by the user. Travel through Missing is not pre-determined: by touching on different parts of screens the user will activate different links, but there is no guarantee that they can repeat their track, the path is different every time.

As well as creating a non-linear architecture, Mediatrix/Seductor also wanted to intervene in the space between the user and the computer screen. Touching the screen requires a much more consciously sensual relationship between the user and Missing than is possible with a mouse - an interaction which highlights the relationship between looking/voyeurism and touch in both personal and virtual spaces. The user is seduced into relinquishing their instincts for control, and into going wherever their touching takes them.

Missing, at first glance, seems to be nothing more than an electronic wig catalogue, but the more inquisitive user soon finds that, just as in real life, things are not what they seem...

Reviews, Essays & Articles
Architecture of association compelling viewing
The Press, 1997 Sept. 3, p. 14
Garrett, Louise.
Missing, Mediatrix/Seductor Productions at The Physics Room : the work enlarges on the possibilities of the computer as an expressive medium.