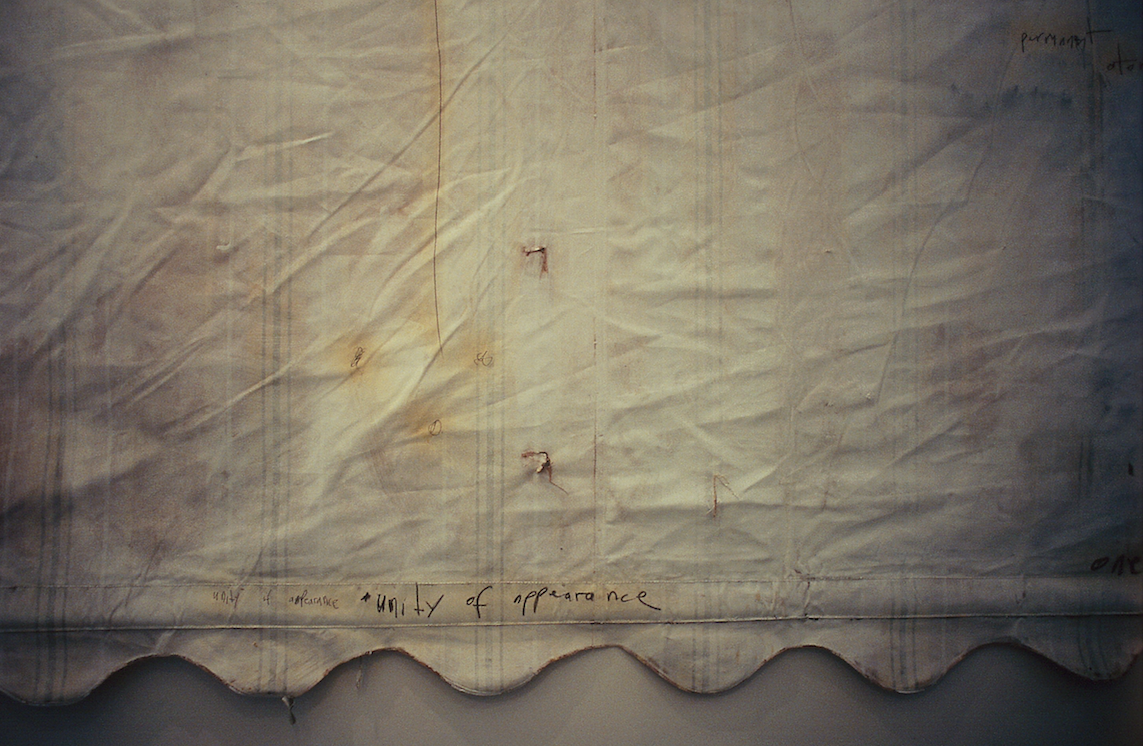 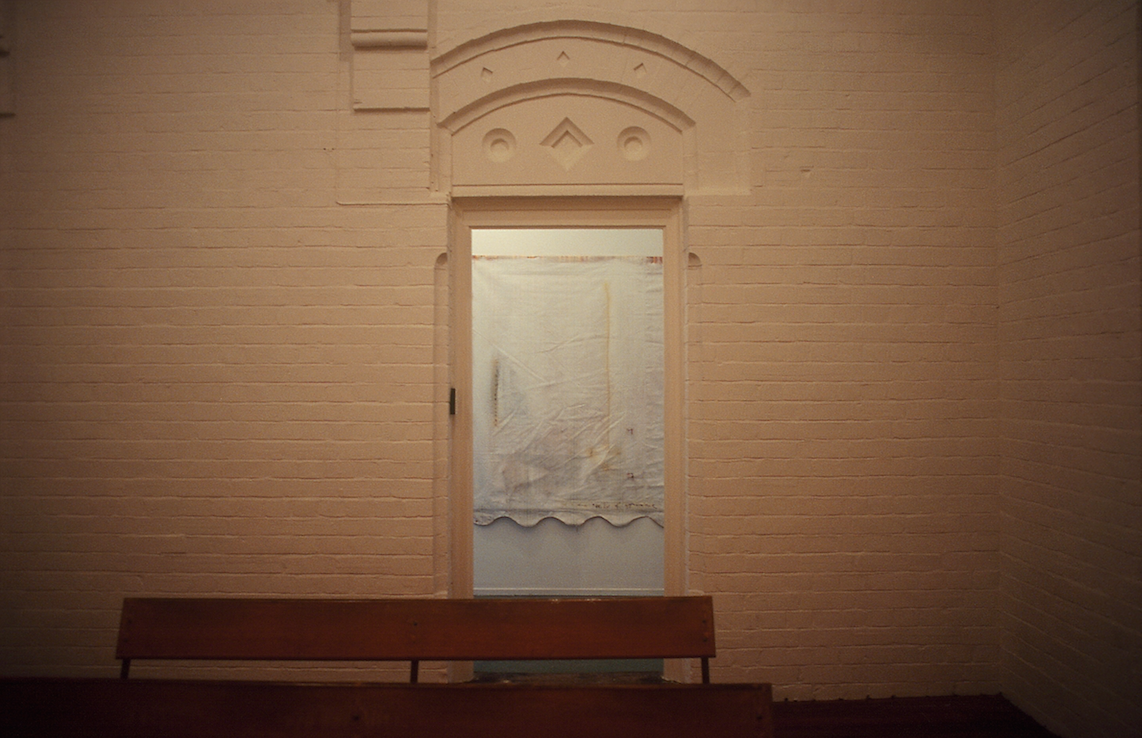 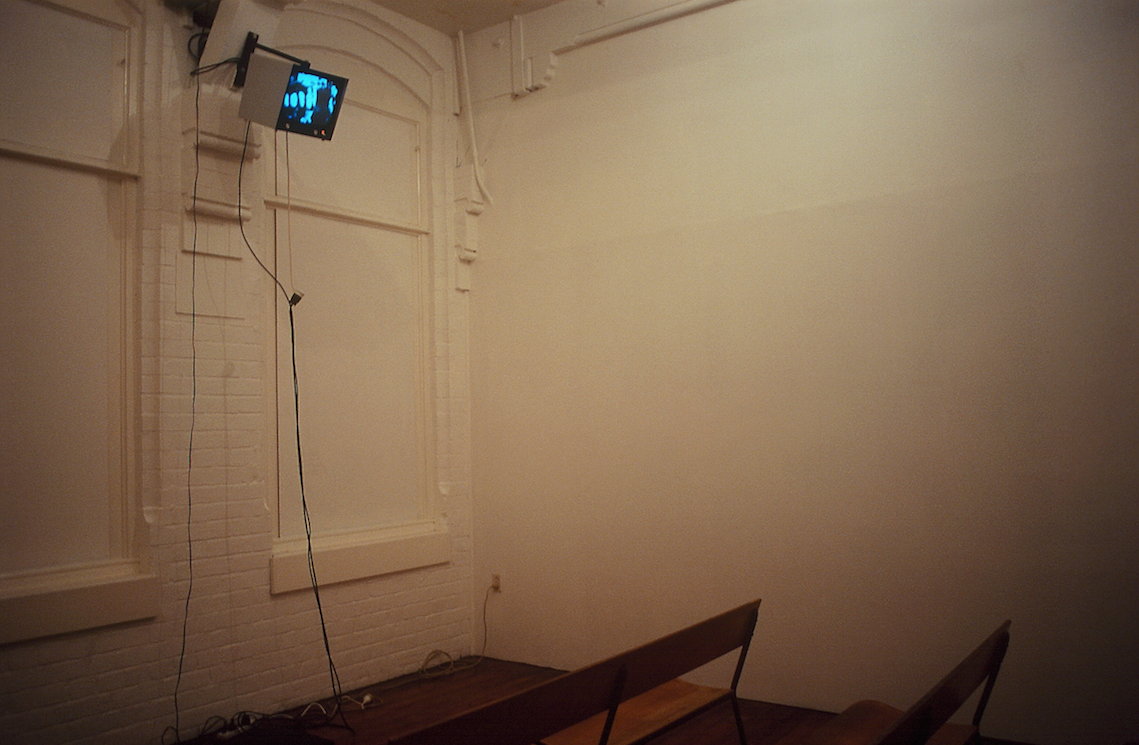 The following is a reproduction of the text that appeared in the artist's catalogue in conjunction with The Voice of Silence, and artist's project for the Auckland Art Gallery, 10 May - 17 August, 1997, sponsored by Harriet Friedlander and curated by Ron Brownson.

FLORIAN MERKEL: Are you trying to articulate the silence of the minimal cube?

L BUDD: Of course I think there are other kinds of silence different from the silence of formal certainty. Silences, for example, that can encourage subjective response.

LB: In Voice, the space is being allowed to carry the silence to reaffirm the space that lives through the viewer. We want to make the space fruitful for the mind.

FM: Are we talking about some sort of mystical minimalism here?

LB: Maybe... these are rather vague terms, like the unknowingness of a process. Some artists can 'rehearse' in their studio before they go into the gallery - we can't. Our question is, rather than being engaged with acting in the world, is it possible for us to express consciousness with no object but itself?

FM: I assume you mean being contained in the body and its feelings...? But how do you know it will work! You must keep a notebook.

FM: Are you sure? You must at least have a notebook.

LB: OK! Sometimes we use a notebook.

FM: I thought as much. OK, so there must be some kind of... it might not be a sketch but you must have measurements written down. At some stage you must have taken a Holland blind and cut it to the right size and said "This is the right size." I'm not convinced that your work is completely arbitrary or intuitive.

LB: Admittedly we do like certain numbers. Those are the numbers that sometimes determine for example, the number of lock-grooves and the size of objects such as the blinds. If the piece is about something that is very distant to us, then numbers like seventeen, thirty-five and twenty-one sound perfect because they are the numbers that we never use for anything except a piece that is very uncomfortable. In terms of the height, it's really determined by how it looks installed in the actual space. Sometimes we will discuss this and decide "well, eight or nine inches is going to work all right." But once it's in the gallery, nine inches really doesn't work, it just doesn't look right. Then we have to increase or decrease the dimensions.

FM: It all has to do with a kind of dialogue. Why do you think you are going more and more in this direction? Before you were a group of people activating a white space and now you are moving towards a more spectacular use of the space. Do you simply prefer it, or does the occasion create the situation for making the work?

LB: At one point we thought about making an outdoor sculpture. I expect we were thinking that outdoor sculpture was usually big and durable. But then that seemed rather dull, because, after all, it is already very nice outside with trees and grass. But in the end we felt we didn't want to put something there and change it all. So we thought maybe we'd make something which fell apart after a while - like plaster that would disintegrate. We made a piece which was a plaster cast. The idea was to put it in a cardboard box under a tree. Our hope was that after a few years the box would break open and the grass would grow over it, and cover it. It would cease to exist.

FM: There is something scary about that, isn't there?

LB: Yes, the works themselves enter the world as witnesses to this process. But we still really like the essentialising tendency of modernism because it is a way of feeling more alive. The problem with it was that it all got channelled into finding an objective formal language. We propose instead an absolute subjectivity allowing existence to become the material, subject and generating principle of artmaking. This is an essentialising process but turned towards internal balance and survival; towards intrinsic value.

FM: There are, of course, plenty of white spaces where you can create or repeat your own ideas or formulas. Maybe this is the ultimate doorway towards anxiety?

LB: I don't think it is that, either. There is a kind of collective madness that is taking us towards a terminal point, but there is also a feeling that this bodily existence is not dependent on a white space so-to-speak, as if that is the only level of existence. But we don't know what the next thing is either, after That. All we are trying to do is concretise the uncertainty, and to isolate some point of contact between That and this: between consciousness and matter.

FM: So... are you wanting me to feel what you feel?

LB: Well no... Voice for example, brings together two works, The Sound of the Silence and The Voice of the Silence as a series of eight Holland blinds which we made between April and May of this year. They are works that evoke the deep space of the interior of the body. In this work for the first time we have kept the blinds very dear to us to indicate the eyes looking within. That is our hope, anyway, our hope that its held breath conveys a feeling of the parameters that the voices inhabit and that you feel included in them. The blinds (our first) try to express voices as gravity made conscious and gravity as the attraction that binds us together as separated Beings.

FM: ...unknowing and uncertainty, rather than knowing?

LB: What we hope Voice does is to test the notion of site as a fixed place with the idea that nothing is fixed. Our work has been characterised as trying to carry on the traditions of the utopian, but none of us are sure about that. We think what it tries to do is talk about some base in the confusing world by confronting it.

FM: So, would it be fair to say that transcendent or utopian readings of the work are too prescriptive?

LB: Yes, we have always thought that this is too easy because it suggests that through the work there is an image of release and we feel it's more like... the opposite. For us this is the real challenge of the work. How do you make an object amongst other objects, that can somehow carry the feeling of Being - for the viewer? An object that somehow manages to make a connection with it?

FM: In this case I guess what we can see is a confrontation between the movement of the viewer and the silence of the space, which in some way is an irreconcilable difference...

FM: ...but also there is an implicit invitation for the viewer to sense their own bodily reactions through this moment of silence.

LB: Yes. Absolutely, yes... and that may well be the moment we have been waiting for!

This interview has been edited from a number of conversations held between the artist, L. Budd, and art critic Florian Merkel. The first of these discussions took place in Berlin late in 1993 and the last in June of 1997. Material from around eight conversations has been combined to present material that both artist and critic think relevant to the installation The Voice of Silence or Voice.