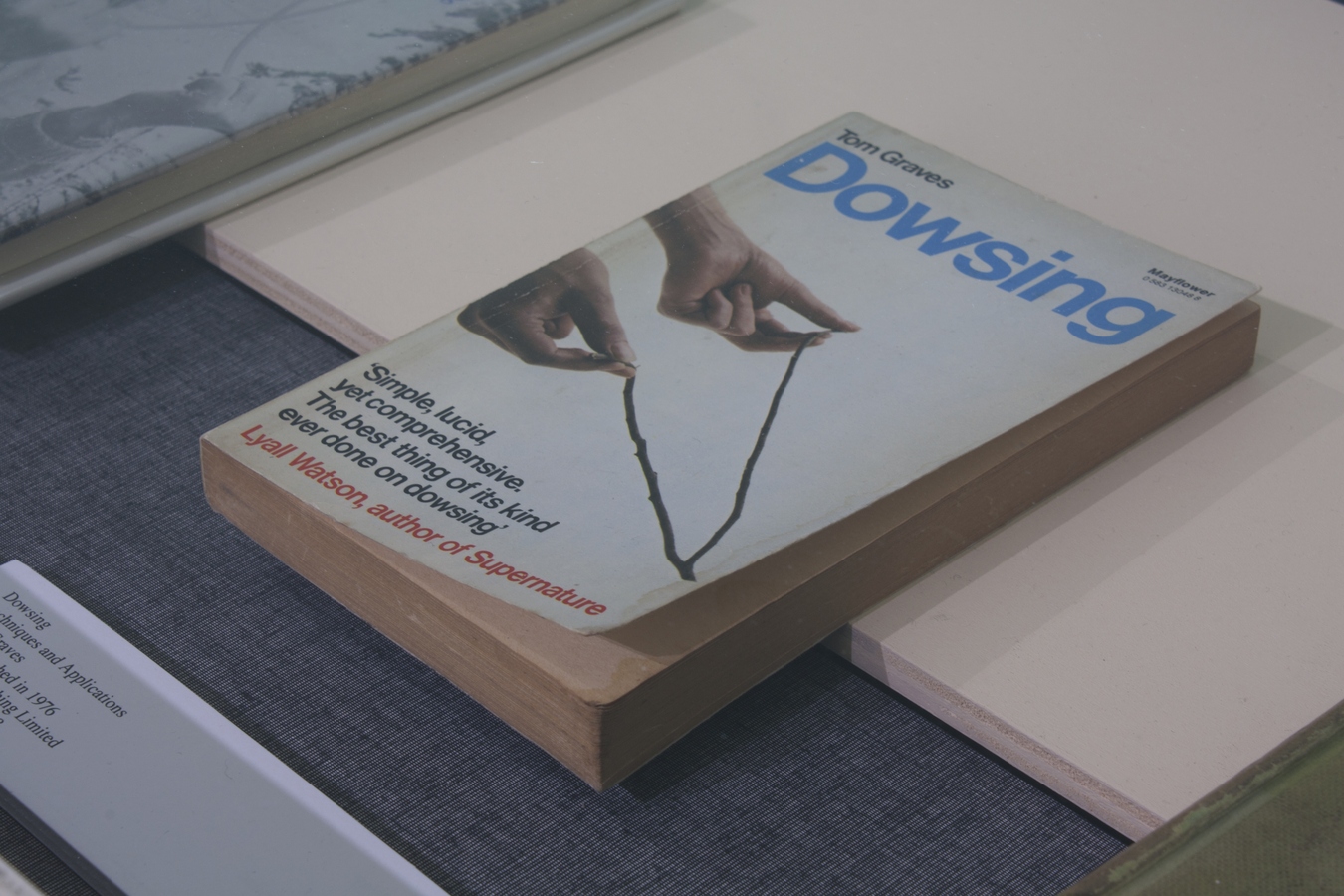 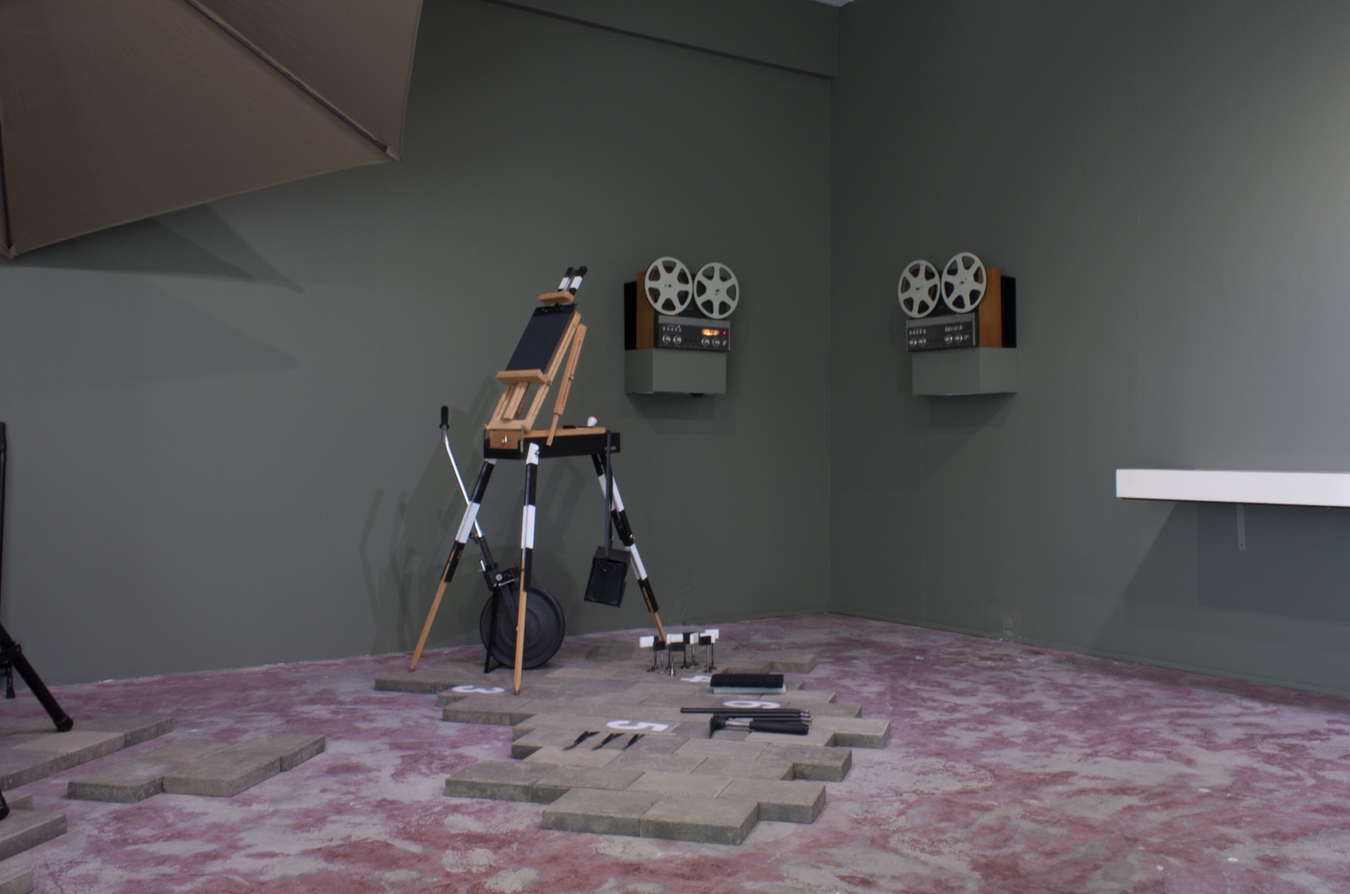 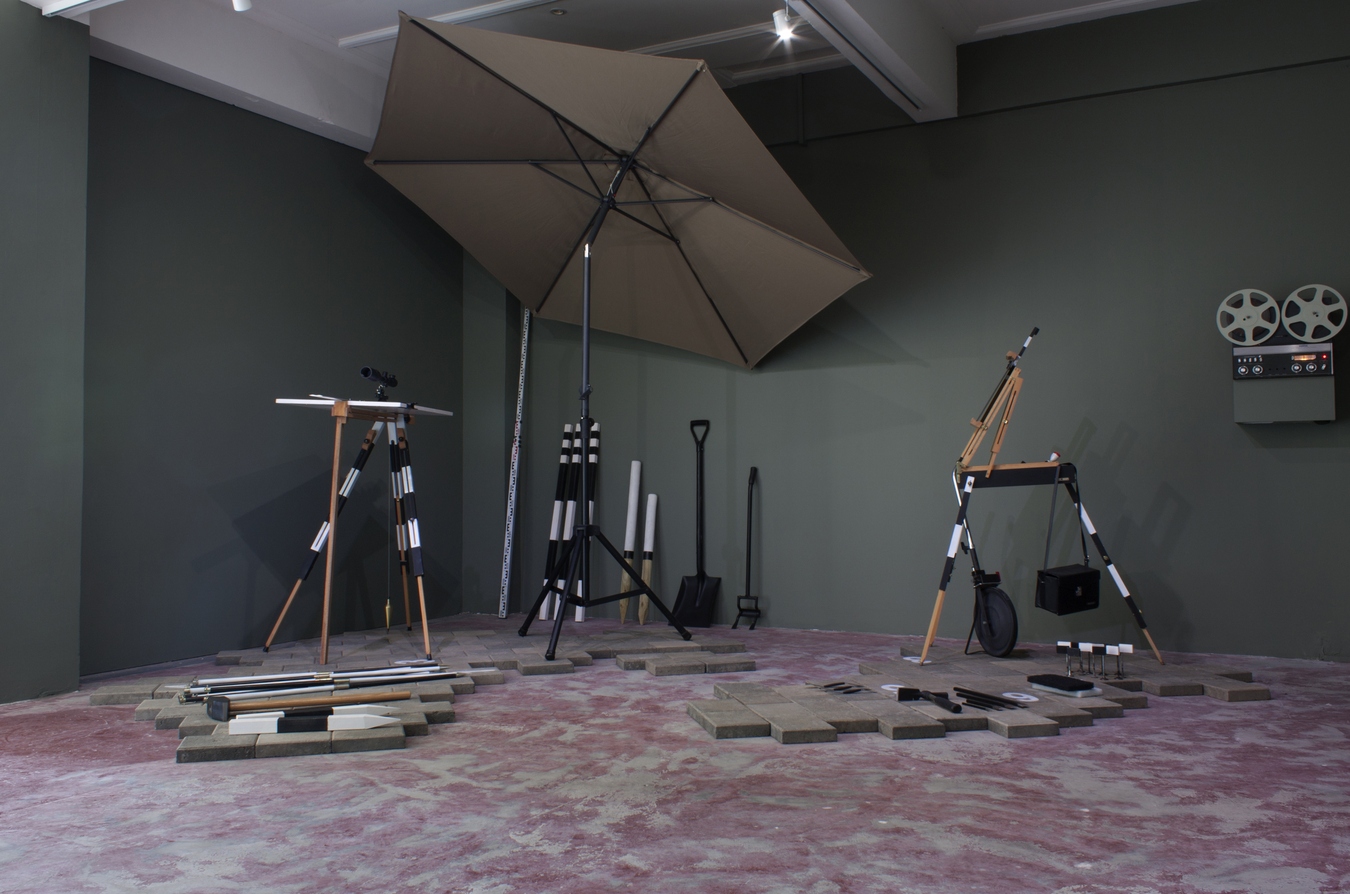 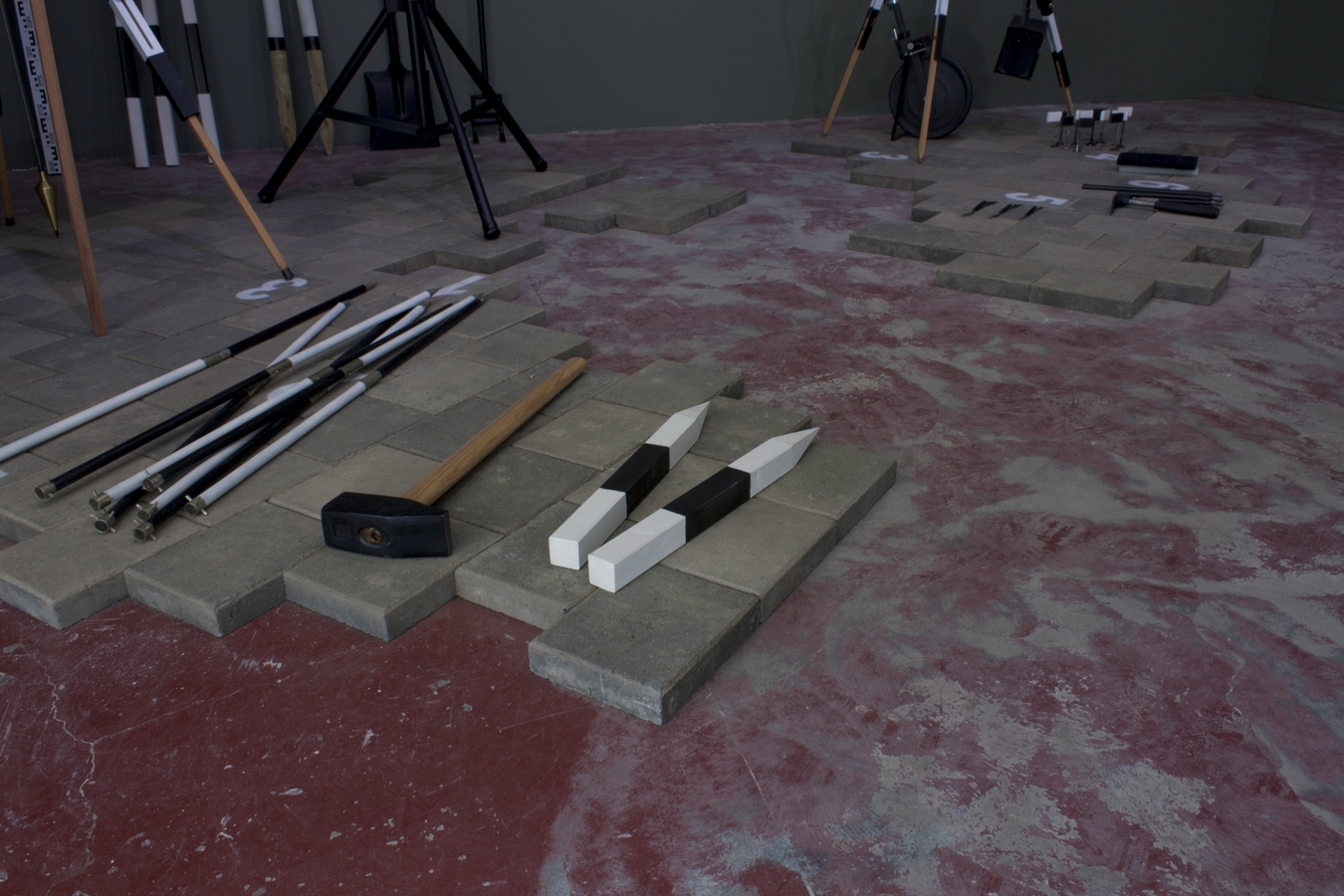 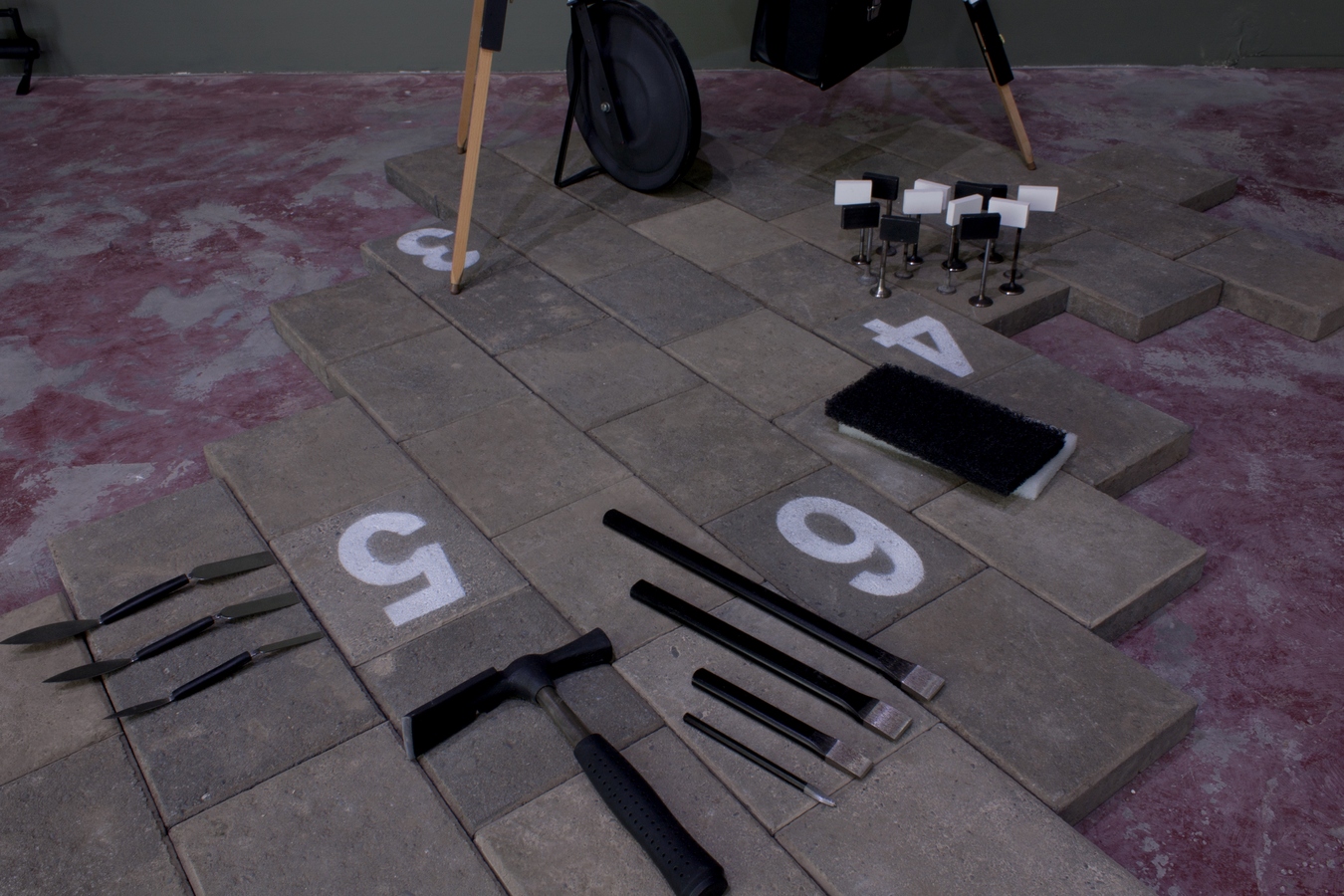 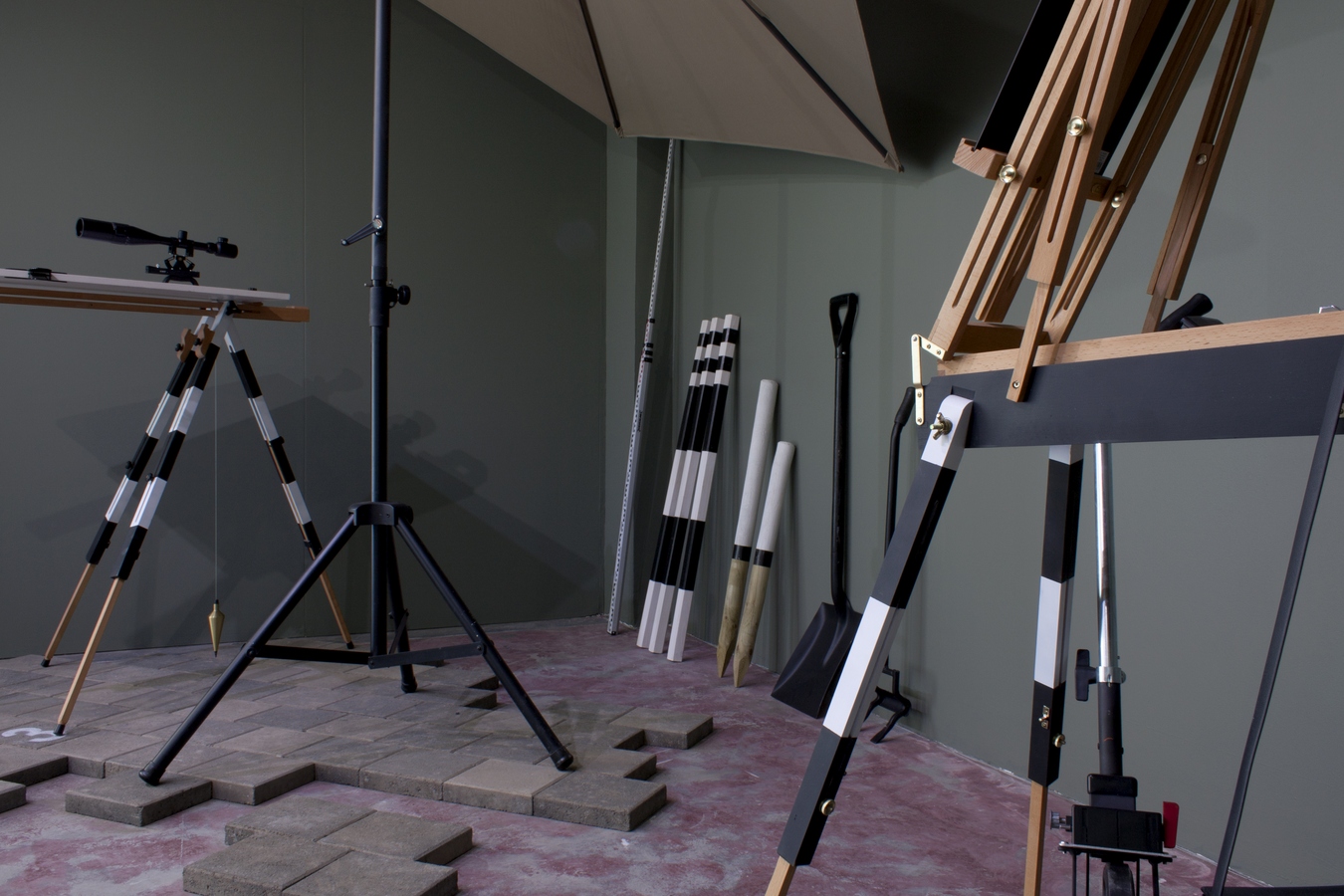 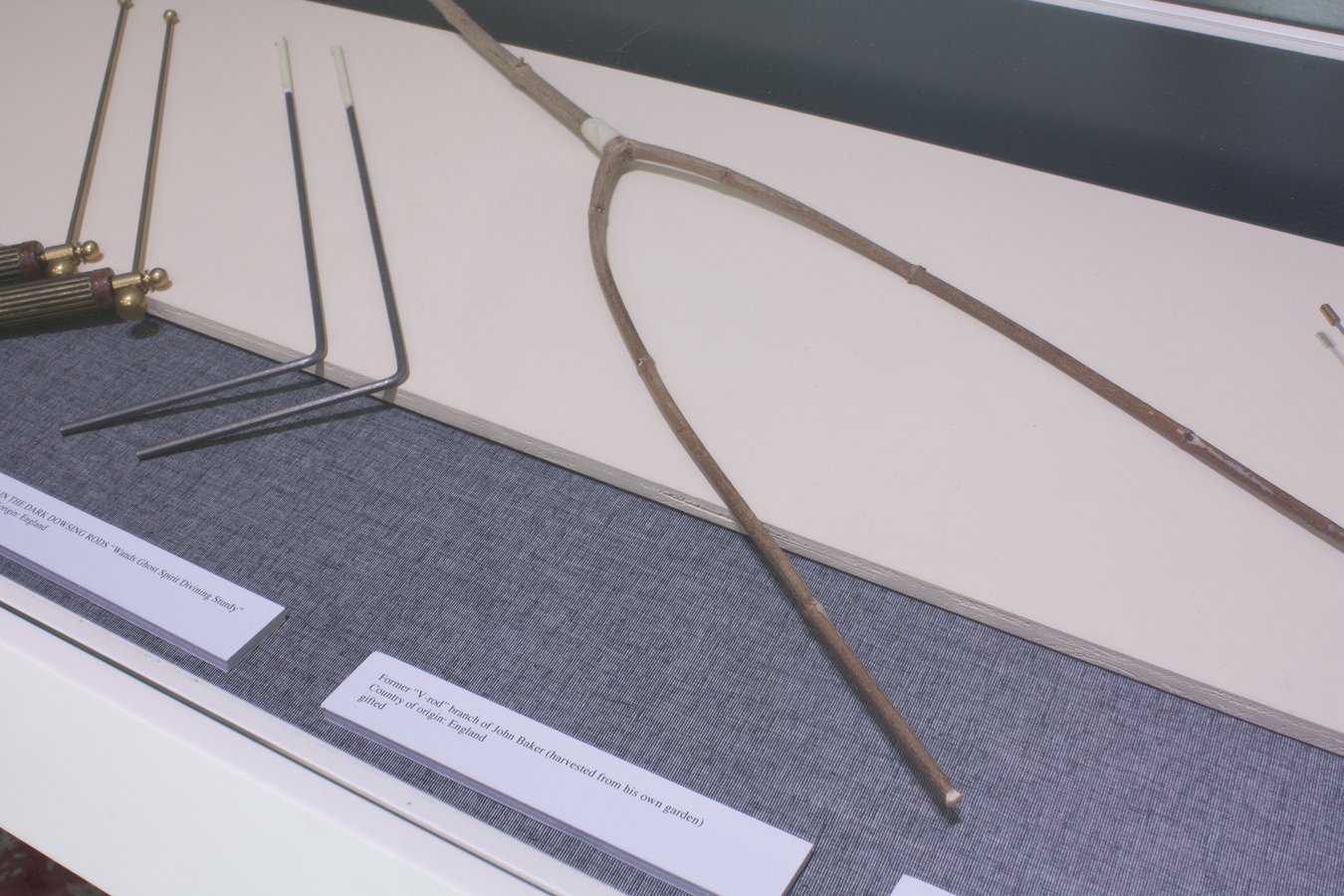 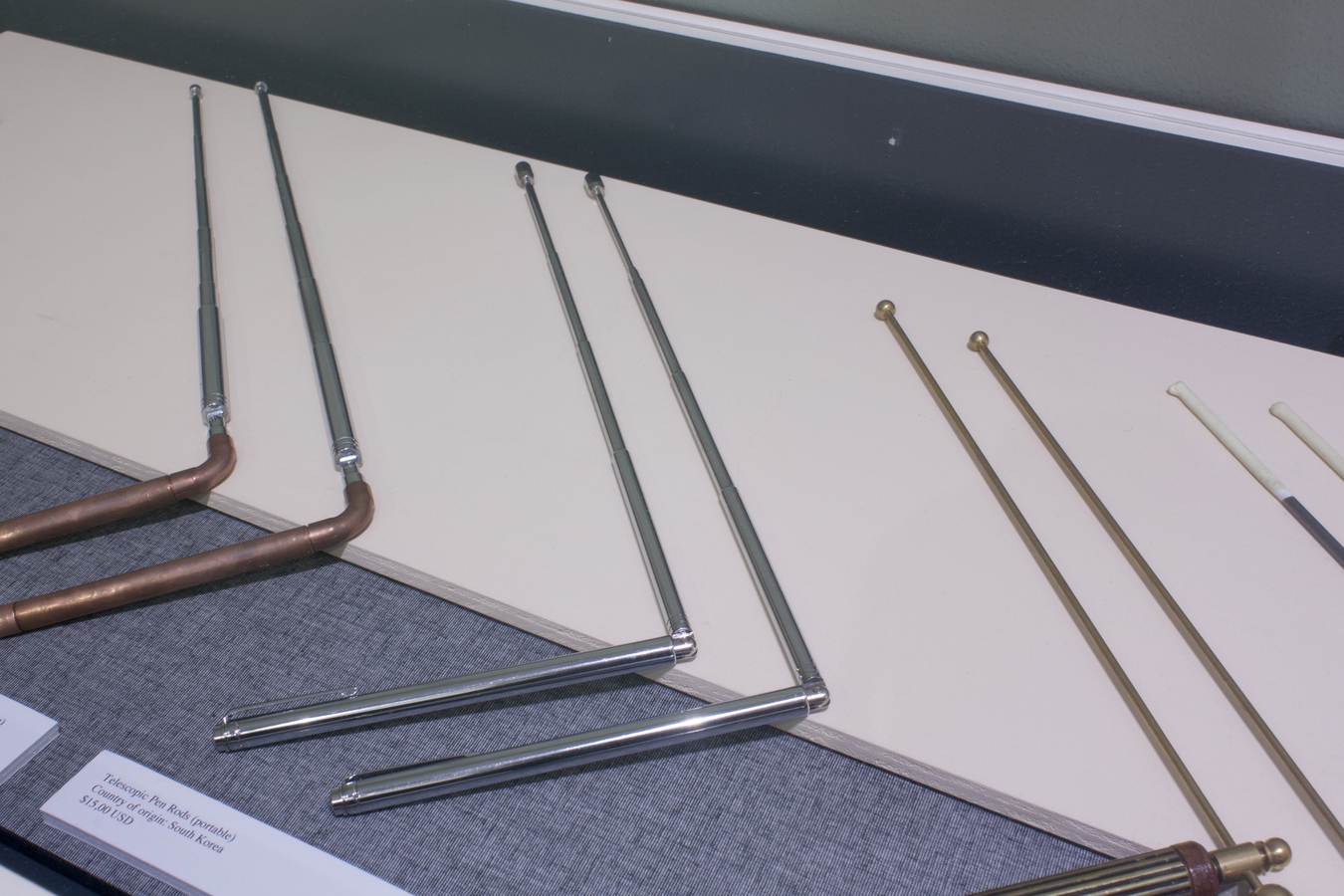 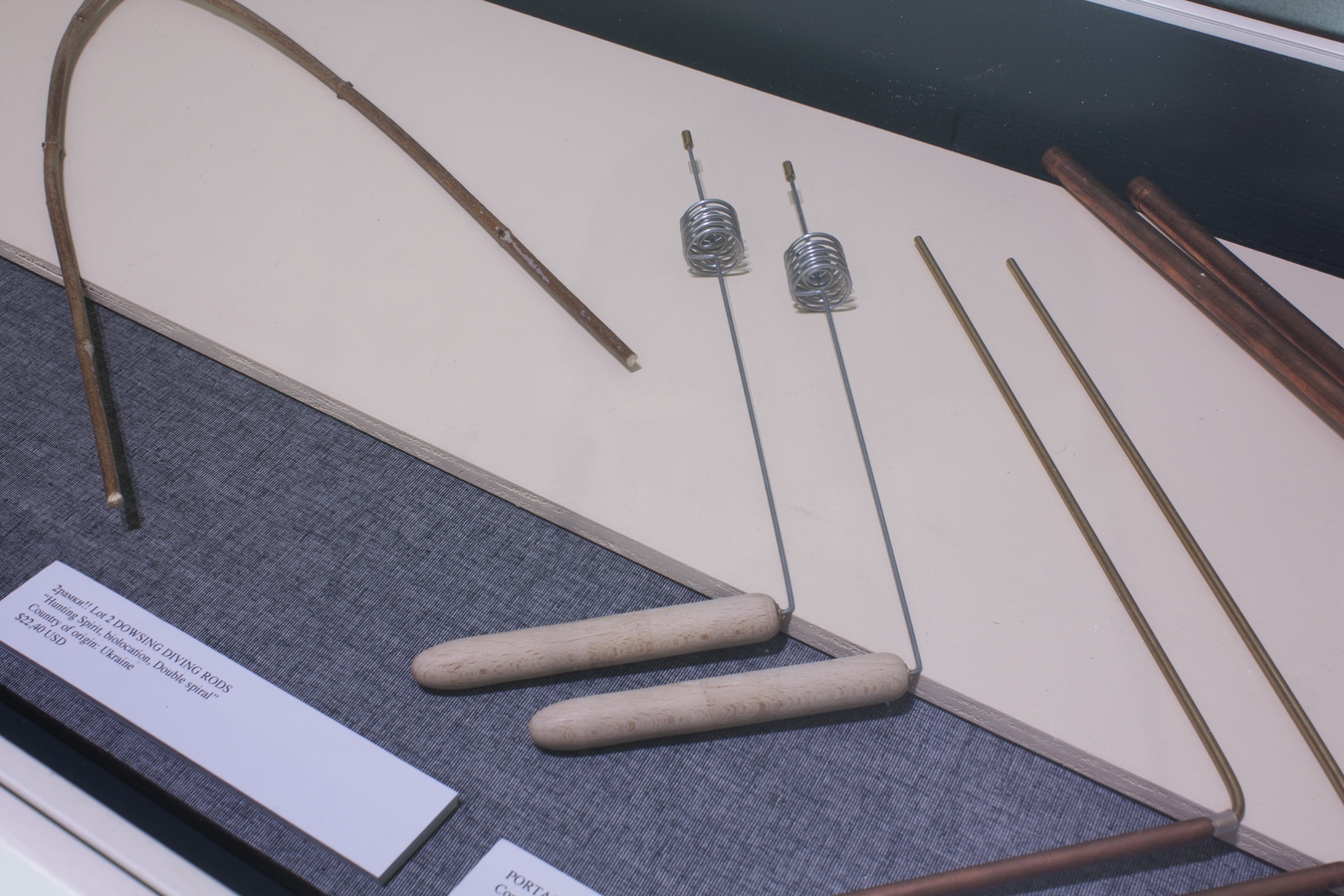 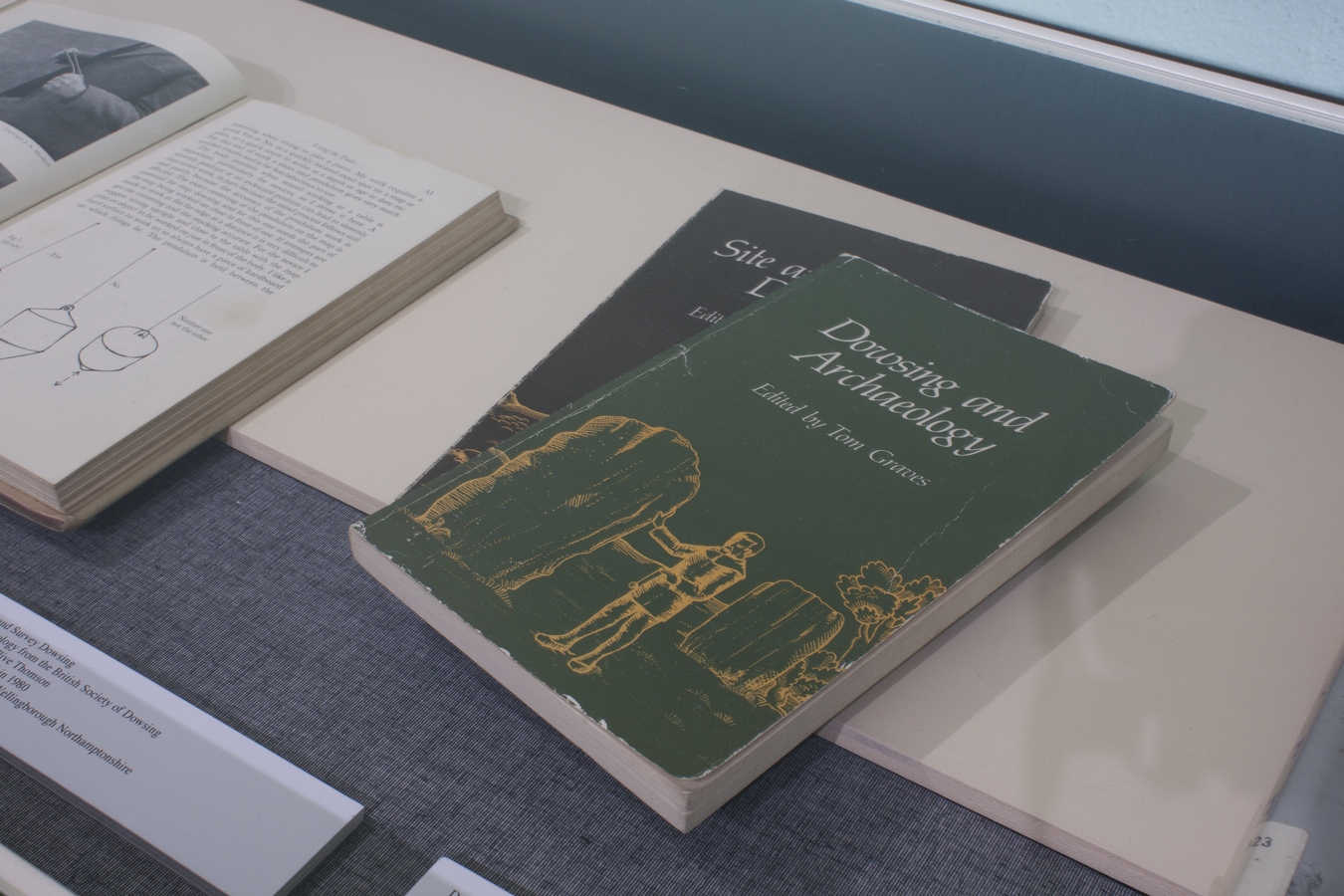 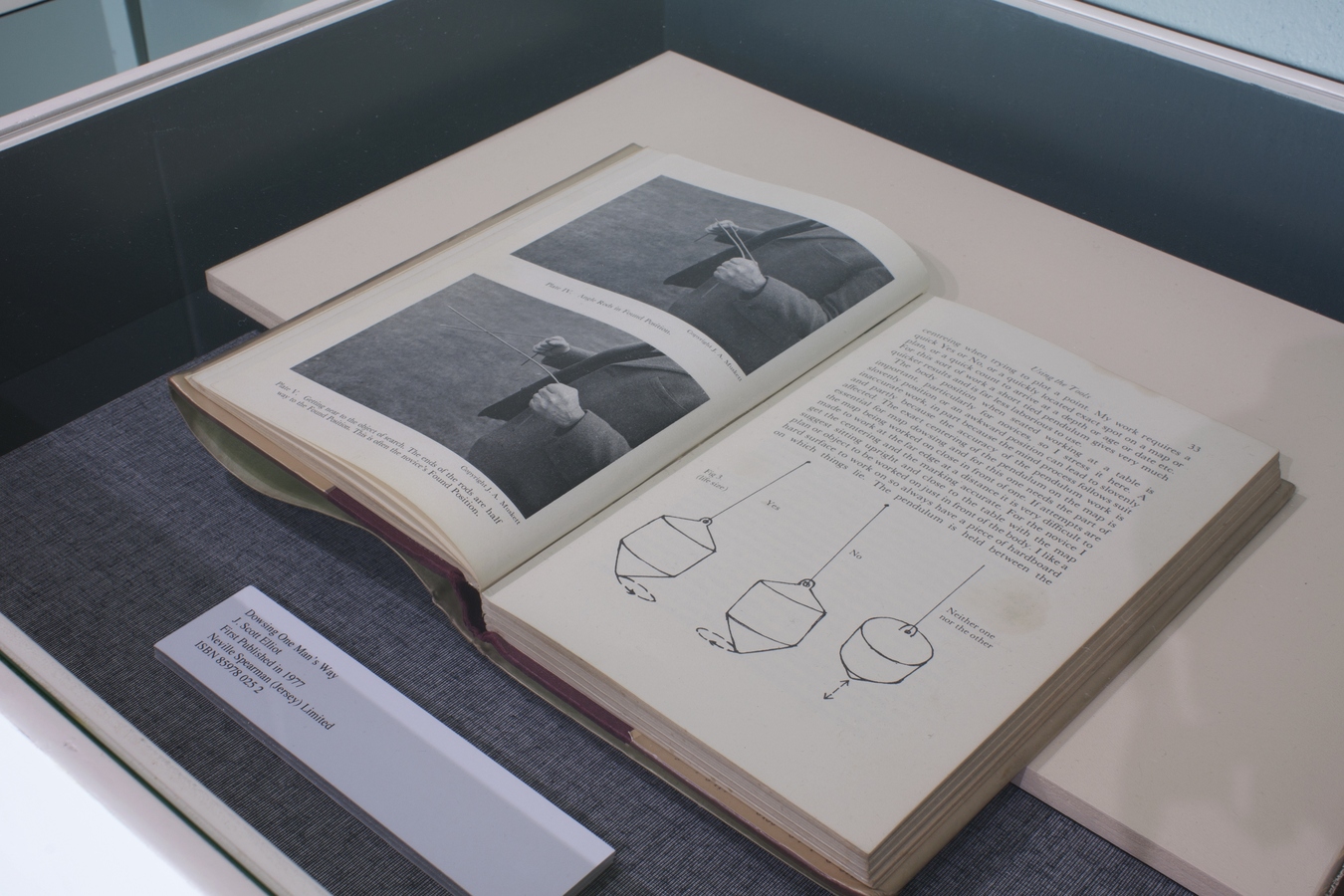 Acting as an archaeologist of sorts, James Beckett excavates material cultures, discovering ‘poor’ objects that cast light on industrial and other social histories. Dowsing Schools: Preliminary Findings and Corresponding Survey Kit revolves around the metaphor of ‘digging holes’ in order to reveal a story. For this project Beckett collaborated with two British dowsers, inviting them to Amsterdam to scope the grounds of local primary and secondary schools.

Dowsing, or water divining, exists at the threshold between science and a pagan ritual; it uses special bifurcated sticks to find structures below the surface, including water as well as hidden objects. Arranged as if the viewer were transported to a museum, Beckett’s installation recounts the dowsers’ discoveries through sound. It presents their tool kit including a ‘plane table’ or map-making system, shovels and other materials taken from the school sites.

The combination of artefacts and audio recordings in the installation requires a suspension of disbelief and suggests an experience that transcends time and space. Through the dowsers’ actions, evocative objects surface revealing memories from an unassuming yet suggestive past.

James Beckett (1977, Zimbabwe, lives in Amsterdam) has shown extensively internationally. Among his most recent solo exhibitions are: That’s That, That Way Round, Basically; As You Probably Know, Artists’ Club Coffrefort, Brussels, Passionate Advocate for a Poisoned Earth, TWAAS, New York (both 2013) and Of Animal and Inventory, Blank Projects, Cape Town (2012). He participated in a number of group projects including: Liquid Assets, Steirischer Herbst, Graz; Scenographies, Stedelijk Museum Bureau Amsterdam; Dread – Fear in the age of technological acceleration, De Hallen, Haarlem; Artificial Amsterdam, De Appel Arts Centre, Amsterdam, (all 2013). In 2003 he was the winner of the Prix de Rome, Art and Public Space in the Netherlands.

Dowsing Schools: Preliminary Findings and Corresponding Survey Kit is presented in association with ARTSPACE and with the generous support of the Mondriaan Foundation.