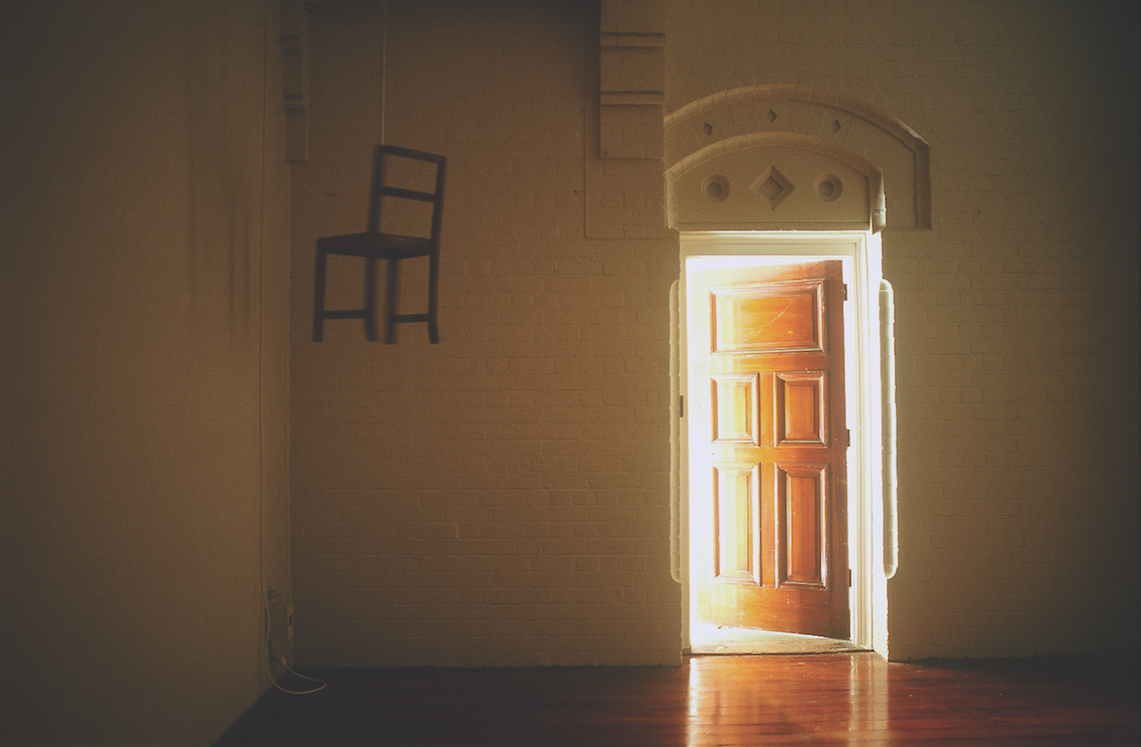 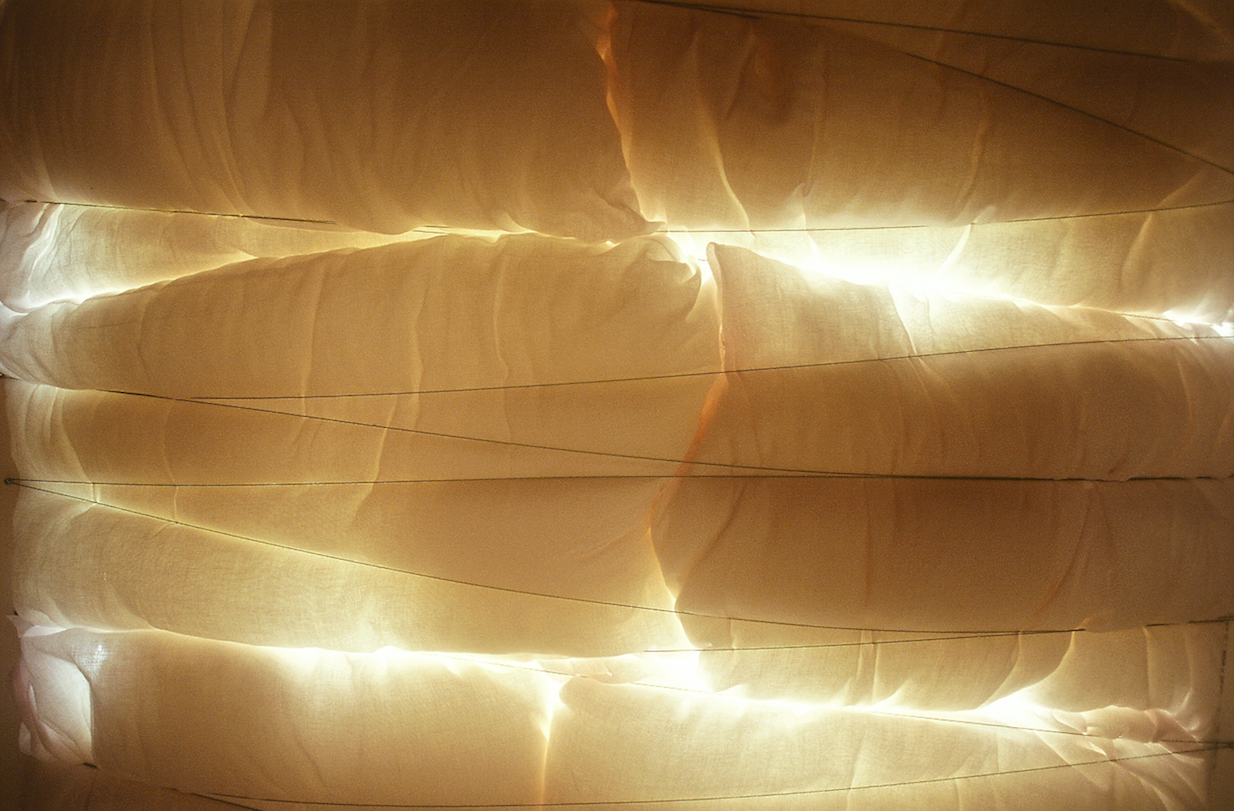 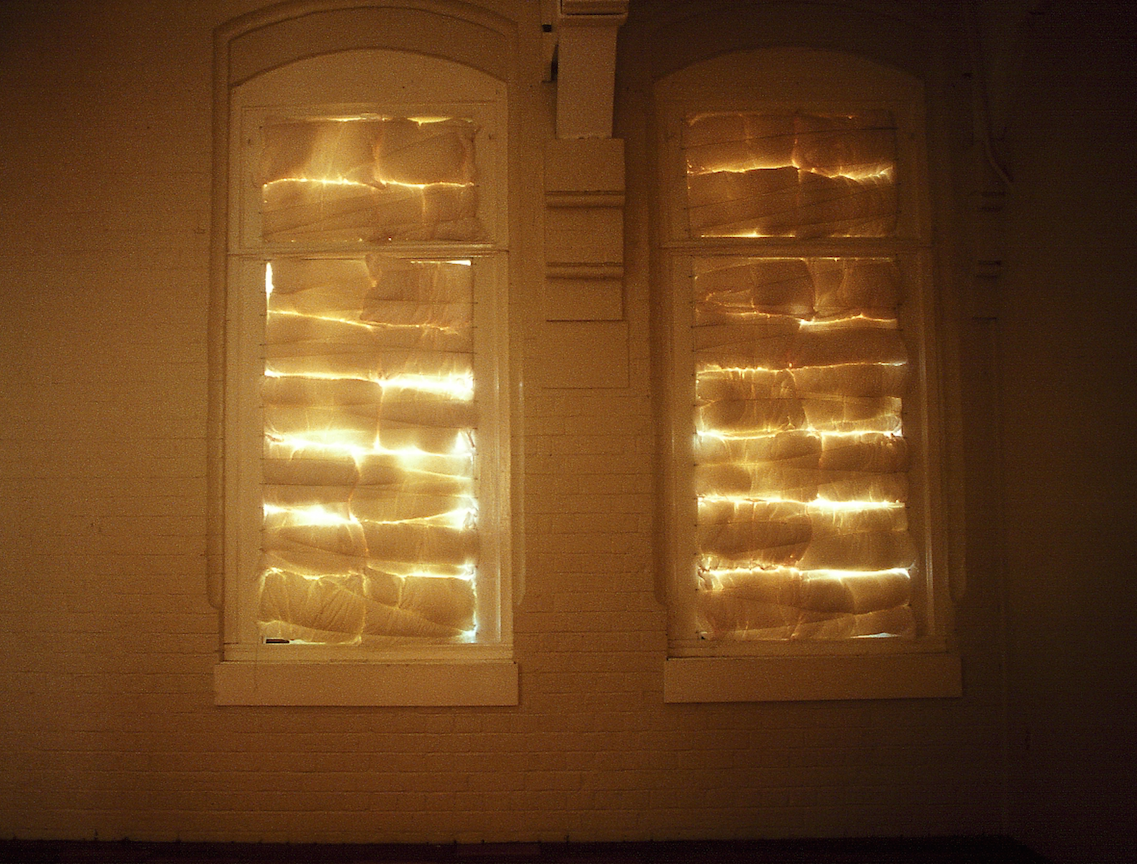 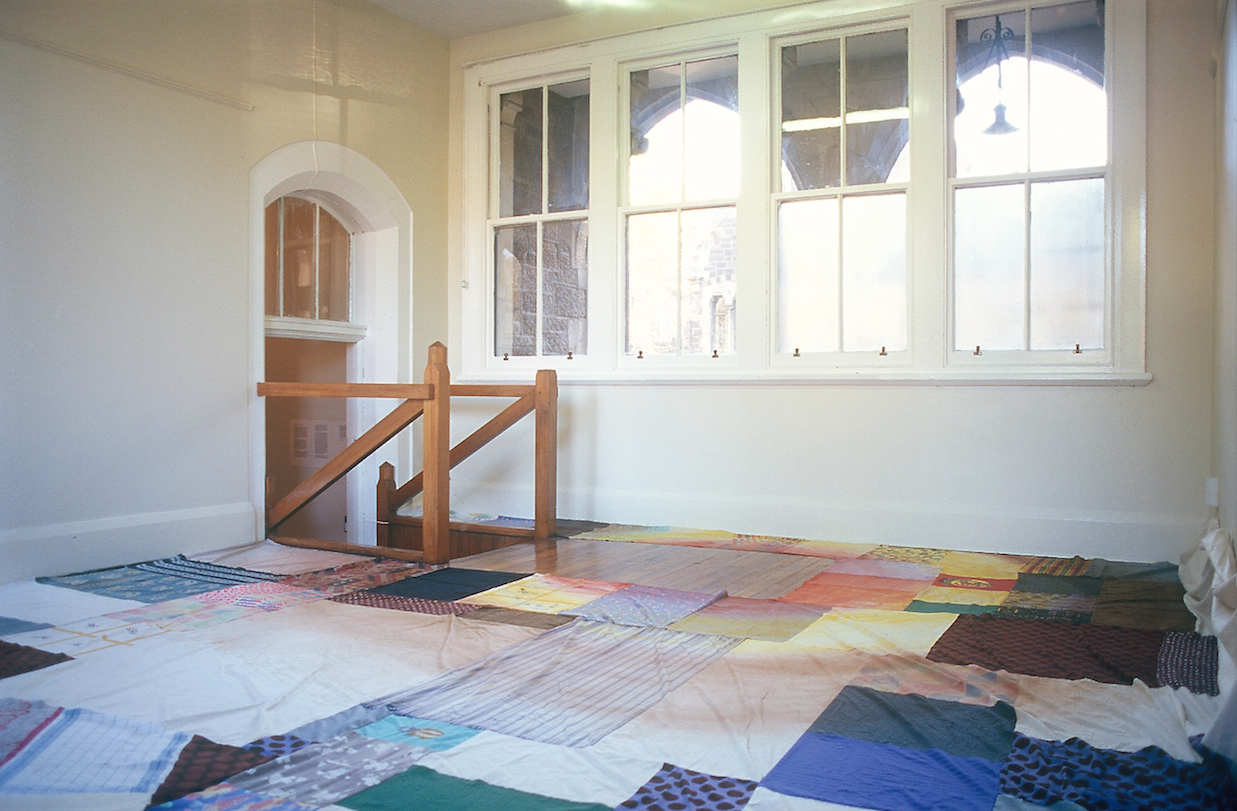 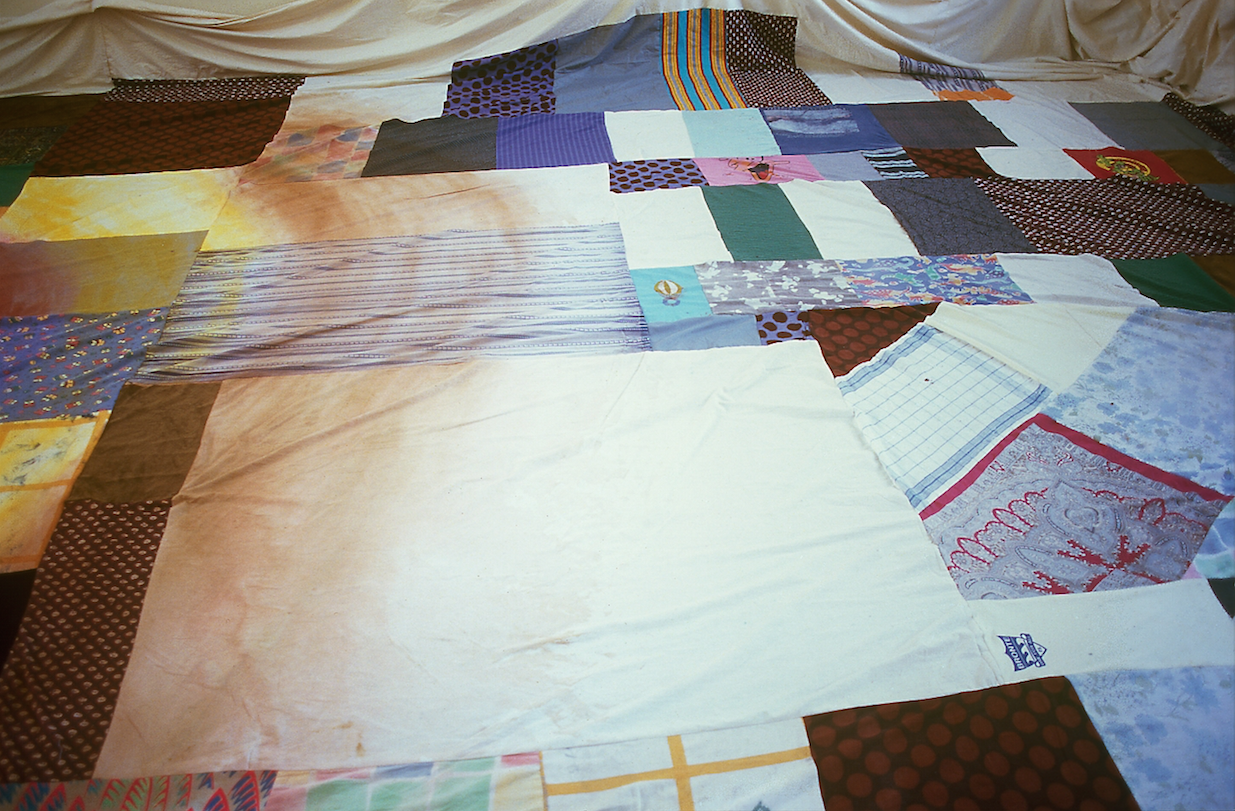 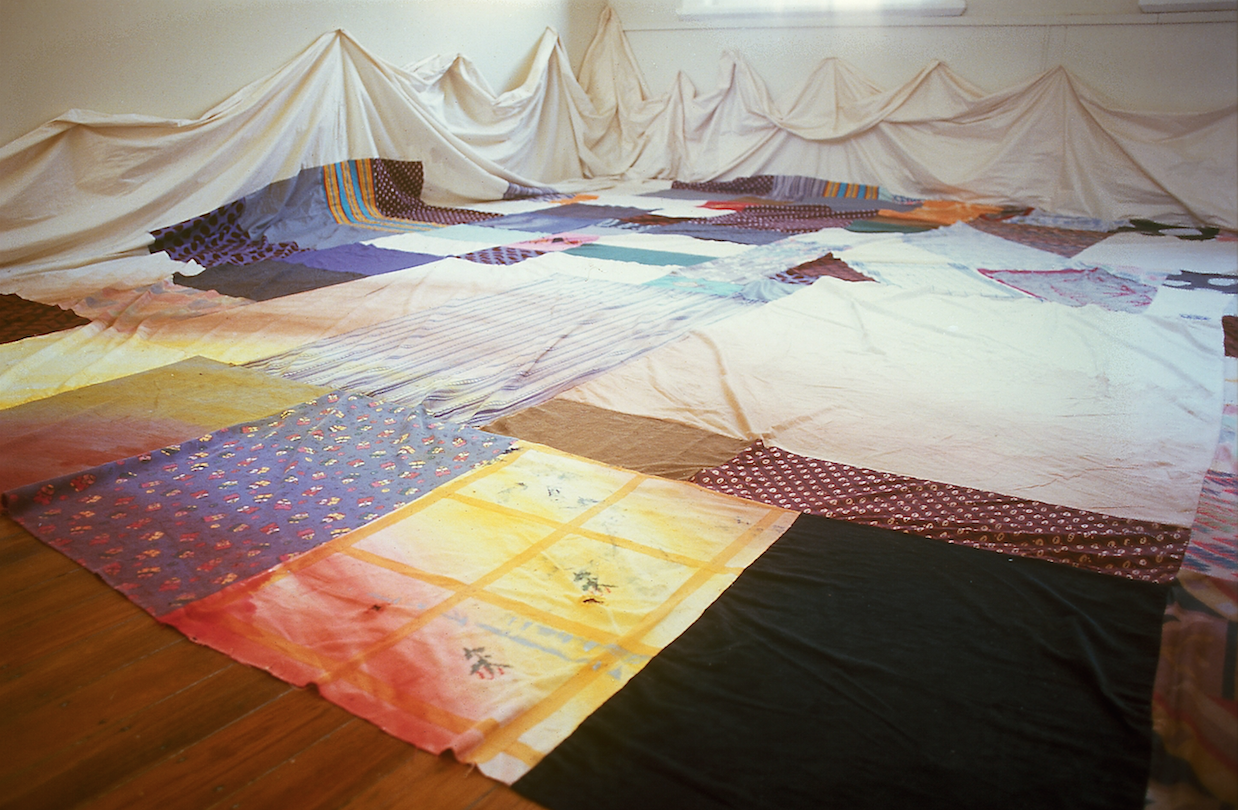 Fiona Gunn & Frances Joseph were the two artists paired for the second of the three shows in 3x2.

"But if I wait for understanding to accept things - the act of surrender will never take place."
Clarice Lispector
The Stream of Life

"It is precisely the steady depth of this presentation, teased apart from simple beginnings, which expands to fill the space. One is held in the movement by which this animation is teased open. It is determinedly present without demanding attention or expulsion.

"...I see a girl sitting on a chair, solitary. She seems to rise and fall, defying gravity. Drawing the drawing, the girl in the chair makes four copies at a time &hellip; with carbon in between. Pressure flows into line, the lines recede under fading pressure, lines sit in ambiguous space. Prepared washes of pure cobalt blue pigment drift to the surface. She sees through her body. The chair becomes the body. They separate. Now we enter the room. A light image is projected at the wall, sliced by a wooden pillar. The image holds steady and then it changes... the girl is restless in her chair. Another image swings accross the wall, closing the gap momentarily, then passing through. Decisively swinging around the room in a blue mirror haze, the moving image duplicates repetitions on the divided wall (made immediately) by regular twin meetings when the gap is closed. But always passing through, illuminating the walls of the enclosure, round and around. Rhythm of pages turning, and the heart...

"There is so little to it: a regular rhythm broken traversely to catch the eye, but not be captured."

Frances Joseph's Attached: "During my stay as artist in residence at the University of Canterbury last year I visited The Physics Room and discussed the possibility of an exhibition. At that stage I thought of showing some of the work then in progress. At the end of 1996 I decided to return to live and work in New Zealand. I am currently in the process of sorting and packing up twenty five years of my life away. The exhibition at the physics room will be the first time my work has been shown in NZ. These circumstances have influenced the work produced for the 3x2 exhibition.

Frances Joseph "Attached relates to the dimensions and architecture of the gallery space. It is clearly influenced by a postcard image Summer, Canterbury Plains, where the patchwork of fields stretches off to meet the snow capped peaks of the Alps. The photo was taken from a plane. I was impressed by the point of view changes as you climb up the stairs into the gallery space - at certain positions the view out across the floor is more significant than the walls, like an aerial perspective.

"The choice of medium (patchwork) references both the specific imagery of the postcard, and the location of the gallery space within the Crafts Centre. But it is also significant in other ways: As artist, teacher and sole parent, I am interested in ways that women in both traditional and modern societies combine creative work and parenting. Patchwork is a medium that can be picked up and put down, it can be worked on with other people. Traditionally the process has not required the sort of obsessive solitary focus of more heroic art media. It allows for the expression of a 'language of interruption'.

"The patchwork is cut from fabric objects (clothes, curtains, samples etc) that I have accumulated over the years. Some of the fabrics have personal associations (like the t shirt my baby son so adored), others are from costumes I designed (from parades, theatre shows, puppets), others remind me of certain places, people, histories (the curtains from Lynne Street, A's pillowcases that I inherited when she set off to tour the world some twenty years ago - we still marvel at the fortitude of those pillowcases). The patchwork, from my perspective is thickly, cloyingly, sentimental. I cannot bear to throw these things away, but I must take stock, be rigorous, sort things out, pack up properly. I can't arrive in Auckland this July like some mad old bag lady with cases full of rags. So the process of making this work has been a sort of preparation for departure - an important ritual. I destroy and reassemble these things into something else called art to send across as an introduction, my first ever exhibition in NZ with an object quite literally made up of parts of my past. "During my stay as artist in residence at the University of Canterbury last year I visited The Physics Room and discussed the possibility of an exhibition. At that stage I thought of showing some of the work then in progress. At the end of 1996 I decided to return to live and work in New Zealand. I am currently in the process of sorting and packing up twenty five years of my life away. The exhibition at the physics room will be the first time my work has been shown in NZ. These circumstances have influenced the work produced for the 3x2 exhibition.

"Someone looking at this work, at these pieces of worn, stained, fabric cannot grasp the specific associations and stories that I attach to the cloth. I imagine that some people will be repulsed - the way you feel entering an op shop and being confronted by the sad intimacy of used clothes and other peoples lives. I hope that the work encourages the viewer to go beyond this response, to a consideration of the way this landscape is constructed in this space (in a room in a courtyard, in a complex) from which you cannot see those incredible mountains. I hope that people don't walk on the patchwork, however from past experience exhibiting floor pieces I cannot be sure they won't. I don't want barriers and keep out signs but I would prefer that the distant calico peaks remain just that."

A response to the exhibition by Felicity Milburn (pdf)