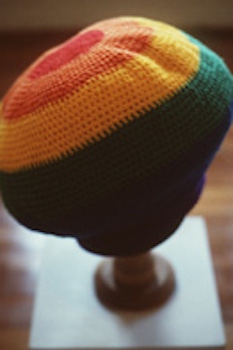 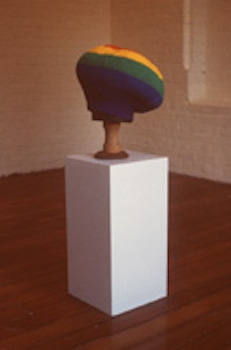 Ani O'Neill combines a celebratory approach to her Rarotongan heritage with a savvy understanding of the mores of the art world. Although her work seems simple and fun on the surface, it belies a complexity of meaning.

O'Neill was brought up and trained by her Grandmother and Aunties to learn traditional Pacific Island art forms, including tivaevae, hat and mat weaving, and lei making, to name a few. O'Neill has introduced these art forms into a gallery setting, overturning expectation both by changing the context of these traditional forms and by subtly introducing unexpected materials which alter the meaning of the works.

In her show, O'Neill made use of a clever and co-incidental pun of her christian name with the Maori Aniwaniwa , or "rainbow." O'Neill uses the traditional global female fibre art activity of crocheting to make a woollen rainbow. In this way O'Neill addresses the issue of location in the Arts Centre in amongst craft shops. Her wearable woolly work is also apposite in this cold climate. But unlike the tasteful natural tones employed by local craftswomen, O'Neill's heart is in the Pacific. The rainbow Tam has more associations with Rastafarians than with skiing attire, and as such provides a stand-in to fill the gap in local culture. O'Neill is aware of the racially homogenous nature of Christchurch, and she is making a quietly cheerful statement about colour.

O'Neill's titles come from the lyrics of two old favourites, "Take me to Paradise" and "Yellow Bird." O'Neill's mother sent these songs to her from Rarotonga in 1981 and so the titles carry a yearning for warmer climes as well as for a spiritual home.

On an entirely coincidental note, "Aniwaniwa" is also the name of the Department of Conservation Office from which a major Colin McCahon painting was recently stolen. This was the first occasion in a long time that art made the national headlines. Hot on its heels was the debate over lack of funding for the Ralph Hotere show in Wellington. O'Neill will be showing in the Wellington City Art Gallery at the same time as Hotere. Unlike the bleak world views expressed in Hotere's "Black Rainbow" series, however, O'Neill offers a more optimistic world view, and invites the gallery visitors to try on the Tam and think warm thoughts of a better future.