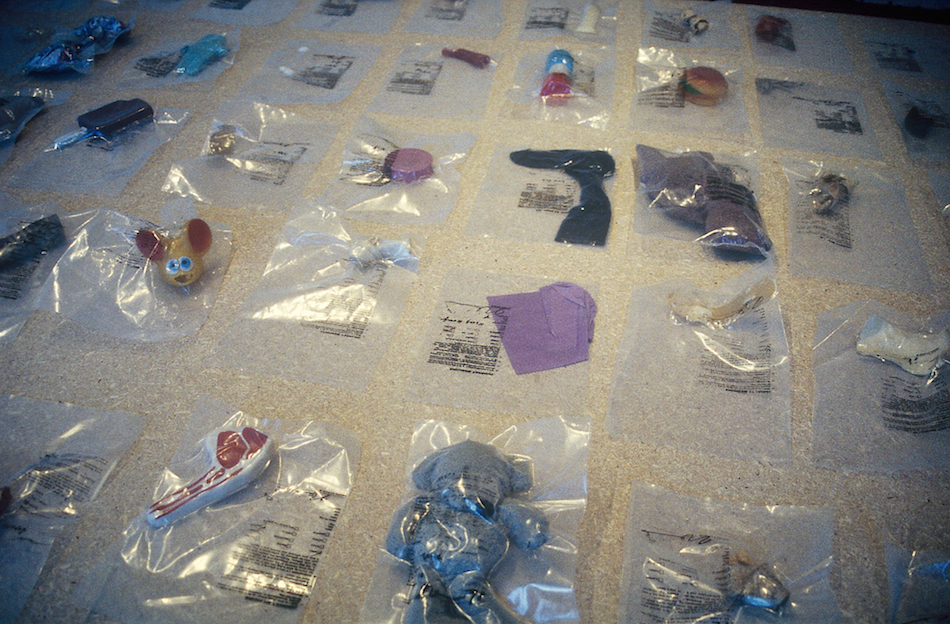 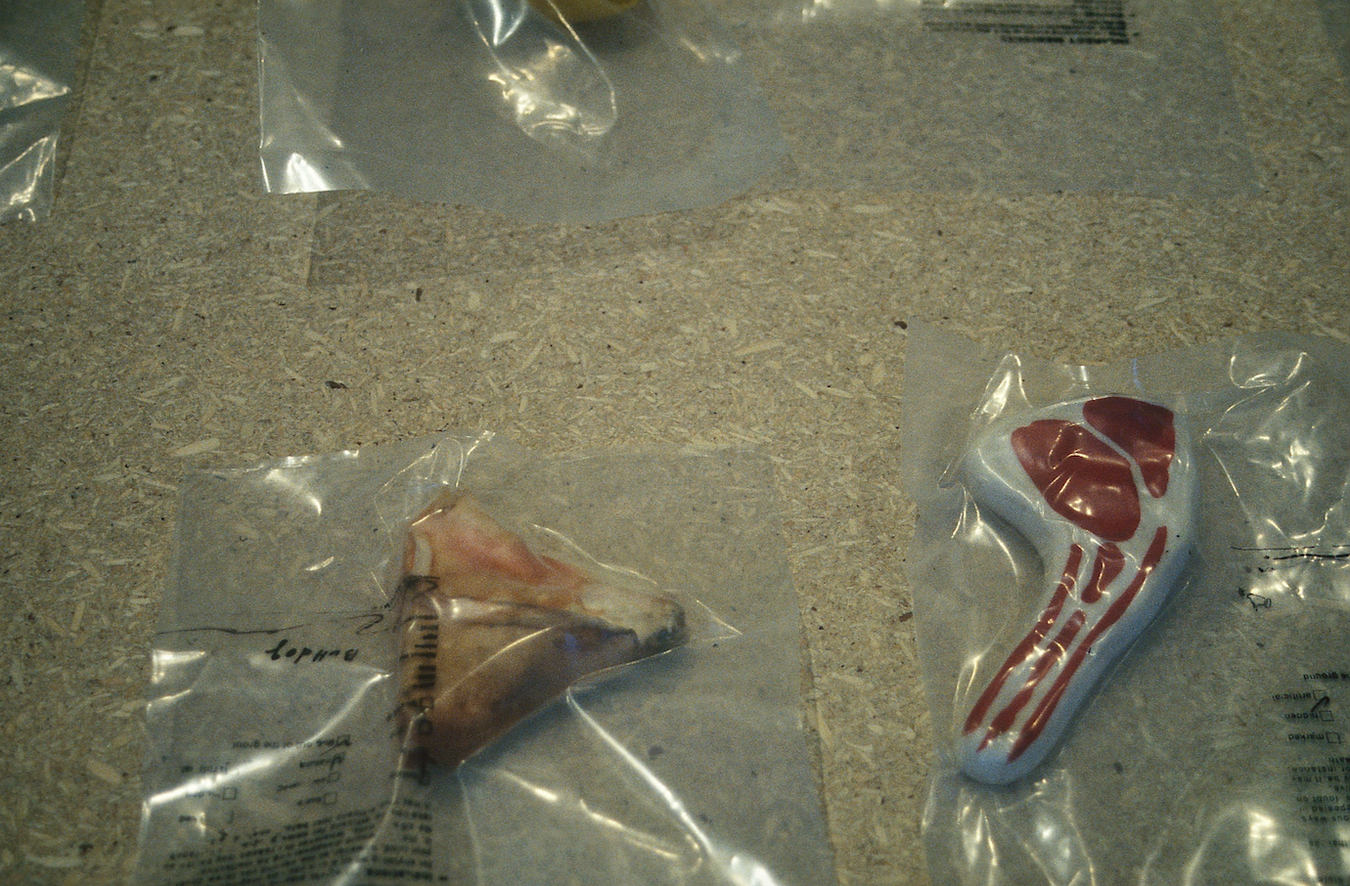 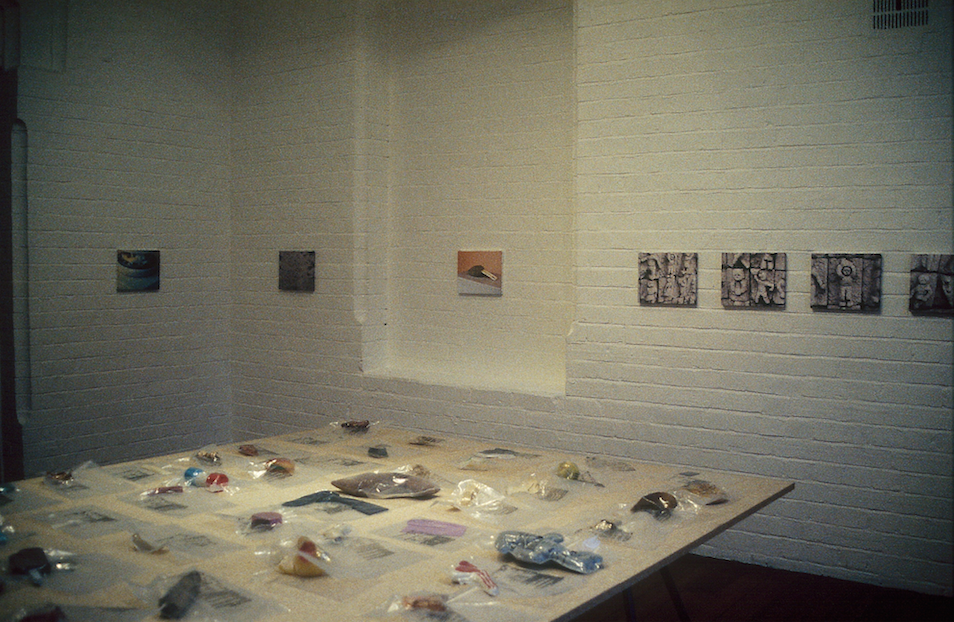 Nobuhira Narumi has been showing works which investigate various forms of symbiosis between dogs and human beings. Among them, the work which he has continuously been doing recently is the project in which he visits various places, receives permission from the pet owner, and takes a walk with the owner's dog on the usual walking course. On these occasions, he places a hand-made hat on the dog, on which is attached a small video camera and a digital camera that takes a picture with each nodding of the dog's head. He then shows the visuals he took. The visual taken from the dog's view without any human subjective view included, captures an interesting world of human beings seen from a distance close to the ground. At the same time, that world frequently reflects the lifestyle of the dog and its owner.

For example, in the project done for London's ICA (BANK TV -Viper), he took a dog of a homeless person for a walk, and most of the visual was that of scavenging for leftovers at the diners' garbage lot. Also, in the project,' Scent View ', done in Hong Kong immediately before its return, the dog, which always went out in a car together with its rich owner, did not walk, and once it was inside a vehicle, it showed a lively reaction towards the outside scenery for the first time.

Also in ' Scent View ', the image which captured a dog's viewpoint looking at a facility that collected and slaughtered dogs which were abandoned by the owners who moved overseas before the return to China, the closeup in which (the dog) seemed to communicate to the dogs inside the cages, indicated the tragic destiny of individuals who were at the mercy of the state's circumstances and of the dogs who were killed because of such individuals' circumstances.

The power of appealing to the emotions in Narumi's images is related to the fact that they are taken by the movements which are dependent on the dogs' low point of view and sense of smell. It closes in on the event or thing in contrast to man's viewpoint -- the major medium of the modern pragmatic sprit-- which relativizes such things. By always taking a privileged position, at a little distance from the scenery or subject. The video images taken in this method gains a materialism that is common to the New York underground film that tried to regain a fresh image by dismantling the rational consistency through strange viewpoints and delaying and fast forwarding of the film's timing. There, one could feel the movement of the subject which moved closer to the object, making one feel a connection through interests and desires, between this side and the other side of the lens. This aspect of motion and mutual relationship between the subject and object are faithfully regenerated in Narumi's photo-documentation.

Narumi's objective is conceptual, making us think of the relationship between people and the others within a civilized life. We can say that the dog is the closest 'other' to man, having an especially long history of accompanying man among all animals. The modern Civilization has been created as a result of organizing nature for a long time from man's integrative viewpoint and numerical calculation. However, beyond modernization, the individual has lost the basic vision of happiness, after being abused by the complicated political situation and economic and residential circumstances. We can say that the massive immigration of the Hong Kong people and the slaughtering of dogs accompanying this, as a result of the return of Hong Kong to China, was a tragedy brought about by the reform promoted under (the slogans) 'uniting of the nation' and 'the grand statement', ignoring the individual's emotions. Through the daily behavior of walking together with the dog, Narumi attempts to scoop up what leaks from the political vision which is driven by outward principles, and to release the suppressed feelings. His project not only takes another look at the world from the dog's eyes, but also makes some kind of communication possible through the dog where he talks with various people and exchanges glances. The casual greetings and curiosity between strangers drawn out by the dog momentarily stops the flow of behaviors and feelings of people that are fixed by functionality, indicating a new direction.

However, the new vision opened does not promote protection of animals or any narrow regionalism, Narumi's work certainly points to the doubt towards modernism, which tries to eliminate even the custom of a community, due to the pursuit of interests. However, that doubt is always emitted from a personal place. The thought of caring for the diary differences which are the life with one's pet and neighbors, sometimes arouses resistance from people towards big powers. Narumi's walks are demonstrations to make each person recall such differences.

Narumi's work is different from the stereotyped ' politically correct' art which was popular in the United States in the first half of the '90's. In his work, it is advocated that the basic unit of the trusting relationship between the dog and man carries an importance which cannot be denied by the circumstance of any power, and that argument is shared by the people involved in this project. In terms of standing in that point of view of individual empathy, Narumi's work is micro-political, and fundamentally, it can be said that it leads to the spirit of ' positionality' advocated in post-colonialism.