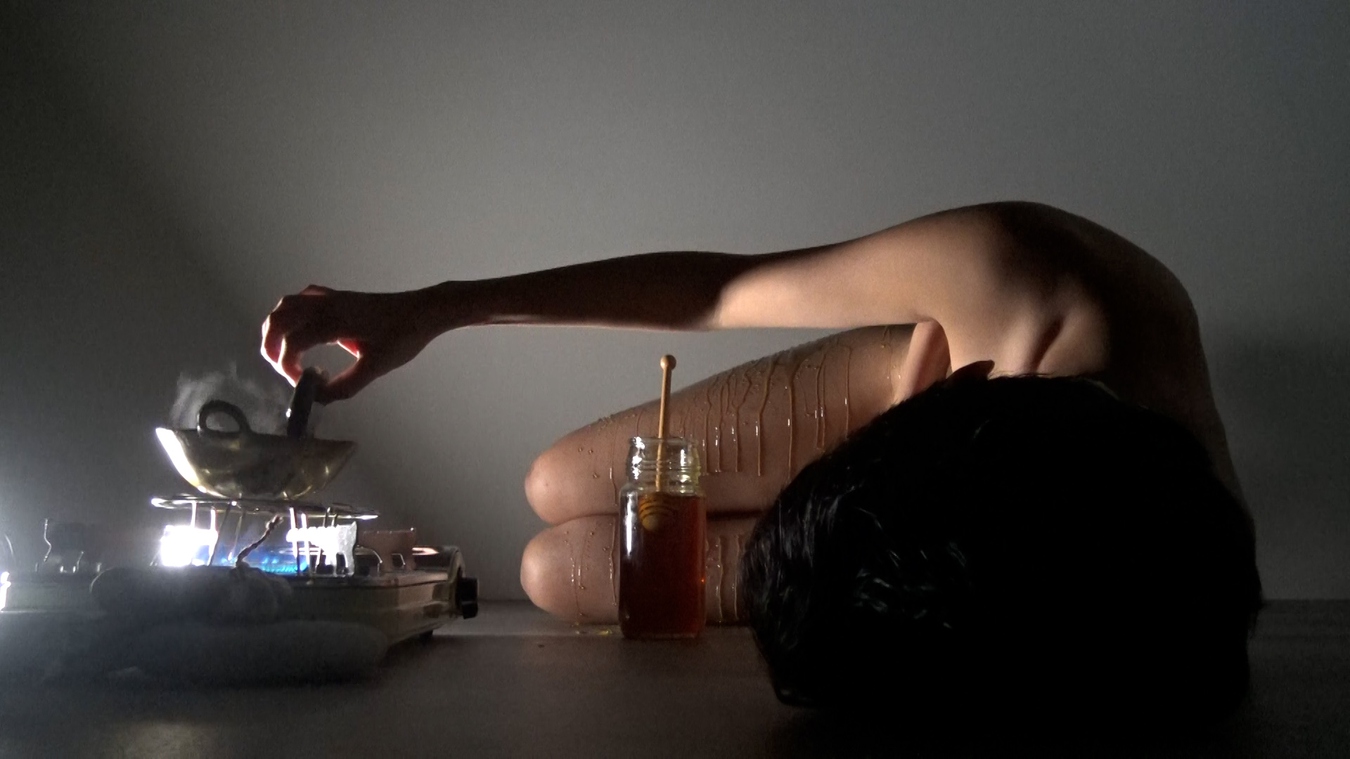 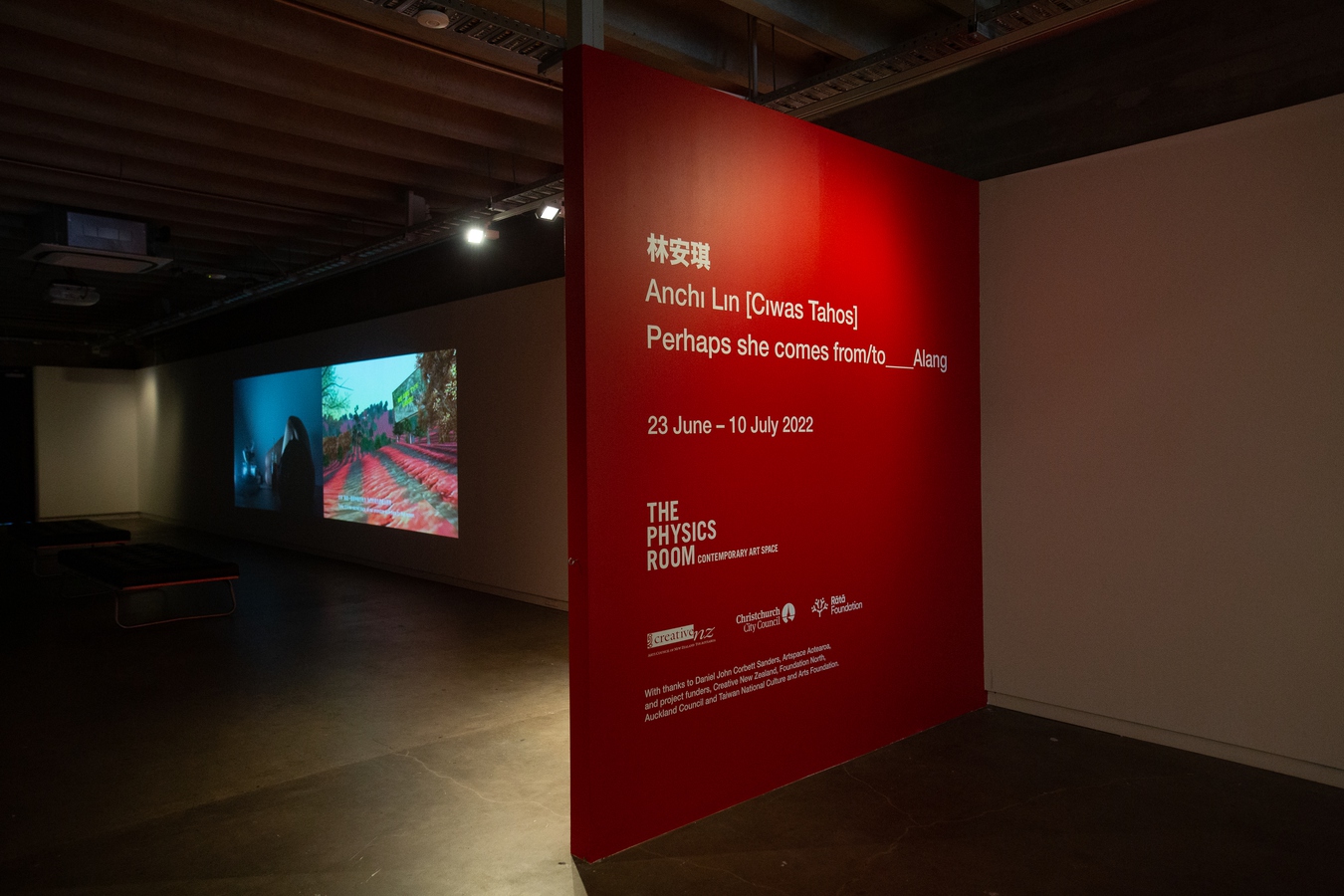 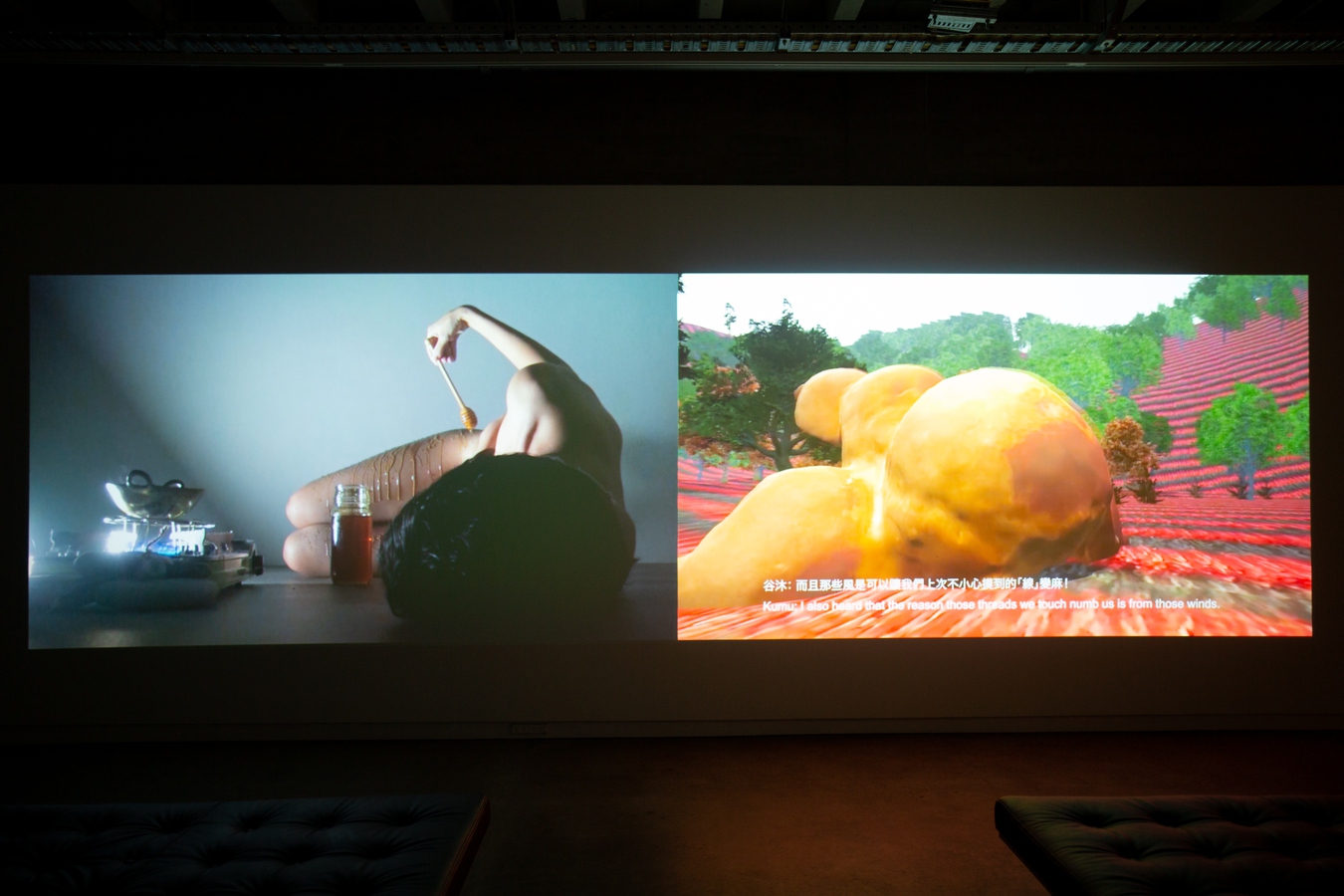 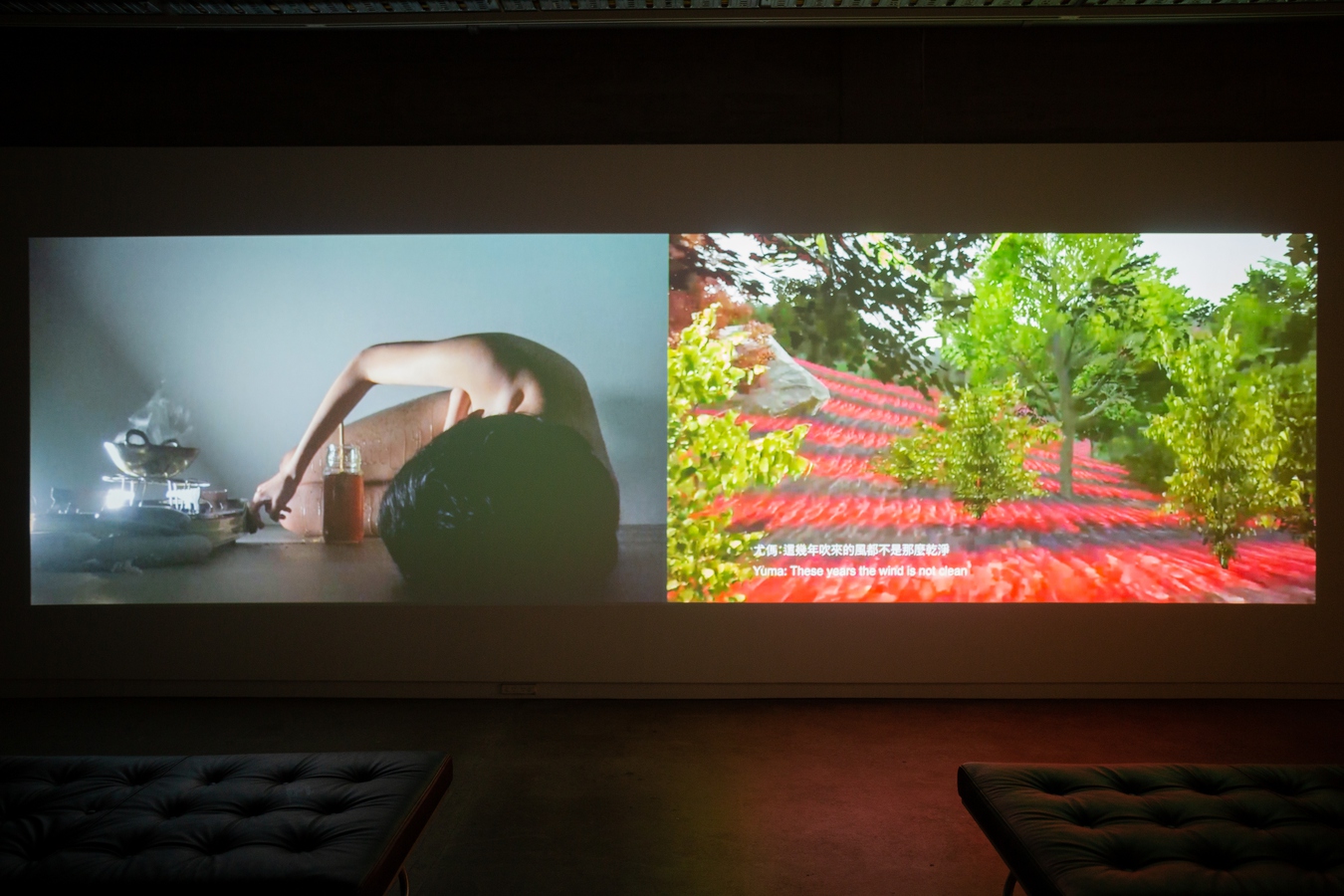 Alang (qalang) is the Atayal nation’s word for tribe, or extended family. In Anchi Lin’s (Ciwas Tahos’) work this is both real and imagined, a place to which she can return. In Lin’s practice, indigenous Atayal worldviews are woven through moving image, performance and the internet, recovering and expanding a space of queer community and self-determination.

This project began with Lin’s learning about Temahahoi, a place where Atayal legend says only women live. The women of Temahahoi are able to communicate with bees, who in turn protect them; they can stay alive through inhaling smoke and steam, and become pregnant from lying on a rock in the wind. This story is intertwined with the narrative of a brass pot given to the Atayal community by Japanese colonisers. According to oral narrative, some women became infertile through the daily use of brass pots.

In this work, the lefthand projection shows Lin lying on the floor in a position similar to the Atayal burial posture, facing west. A brass pot on a stove alongside her steams as it heats. There is a jar of honey, which she repeatedly drips over her body, and wipes away with stones. In the second video, a conversation is held between two hunters who have encountered Temahahoi. The work moves through a virtual 3D landscape inspired by the Aowanda National Forest Recreation Area in Nantou County, central Taiwan. This terrain was created from a 3D scan of a small textile woven by Lin in red and black, the significant colours of the Atayal people. Billboards throughout the forest address issues of local concern, from mining, to the loss of bees and the climate crisis.

Later in the work, two Temahahoi women speak about the loss of one of their relations, Ciwas (Chen Yue, Lin’s grandmother), and their worry that they can no longer become impregnated by the wind. One talks about air pollution as a cause, the other mentions a thread she touched that numbed her. Lin refers to a hidden high-voltage electricity barbed wire system, the ‘Ai-Yong armed defence line’, that the colonisers used in the mountains. This allowed them to take natural resources such as camphor trees, as well as operate as form of control.

Perhaps She Comes From/To____Alang is voiced over in the Atayal Squliq dialect, which Lin has been learning over the last two years. The artist writes, “By re-creating a narrative for…from three different stories—including the story of Temahahoi, the story of infertility triggered by the use of a brass pot, and the presence of my queer body—I re-examine issues of displacement, identity, and gender.” This work proposes an evolving space, in which the vitality of queer bodies, indigenous narratives and the environment sit in powerful and world-transforming relationship.

You can continue to explore the virtual landscape of Perhaps She Comes From/To ____ Alang on your smartphone at https://raxal-mu.glitch.me/.

Anchi Lin, Ciwas Tahos, 林安琪 is a performance and new media artist of Taiwanese Indigenous Atayal and Hō-ló descent based in Taipei, Taiwan. Following a Bachelor of Fine Art in Visual Art at Simon Fraser University (Canada), Lin is currently undertaking a Master of Fine Art in New Media Art at Taipei National University of the Arts (TNUA). Through her practice and interest in language, identity, gender, and the environment, Lin seeks out new forms of understanding beyond the hetero-patriarchal status quo, using video, performance, cyberspace, and installation. Currently solo exhibition at Artspace Aotearoa and Pswagi Temahahoi project with Suaveart for Jatiwangi Art Factory in Documenta 15th (Indonesia/Germany). Recent significant works include Perhaps she comes/to__Alang in Phantasmapolis Asia Art Biennale, 2021 (Taiwan) and The Land in the Middle of the Pond commissioned by the Green Island Human Rights Art Festival, 2021.