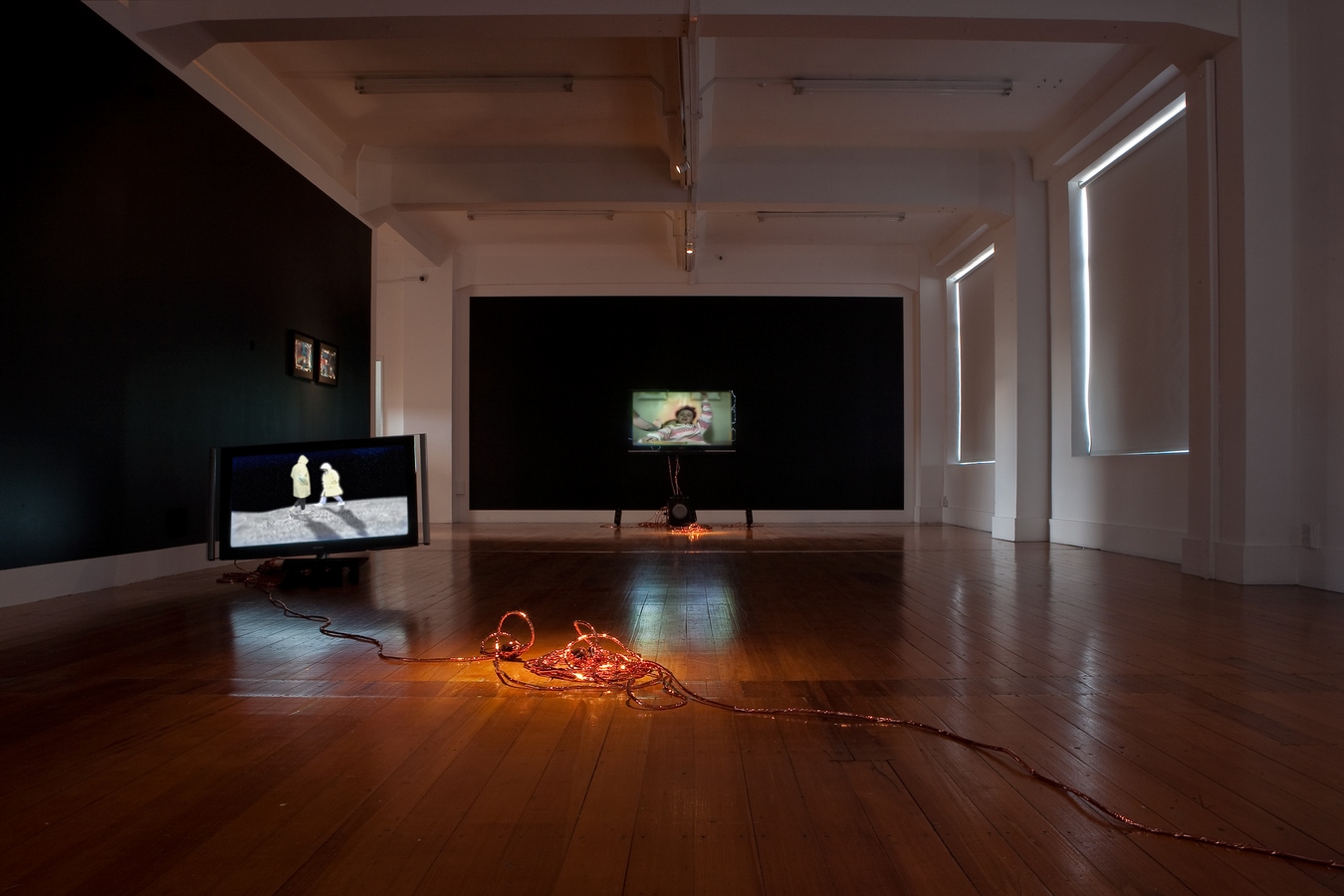 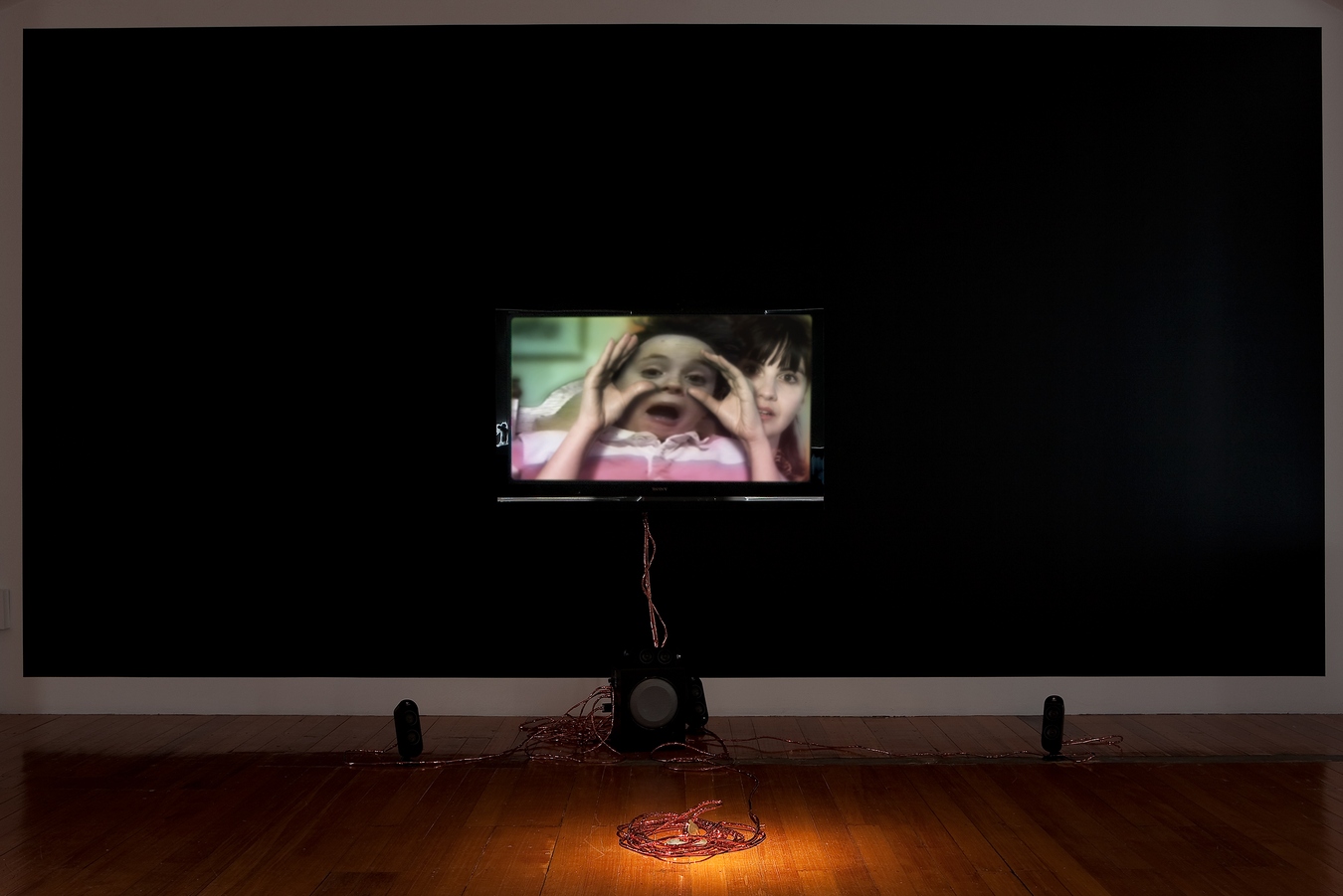 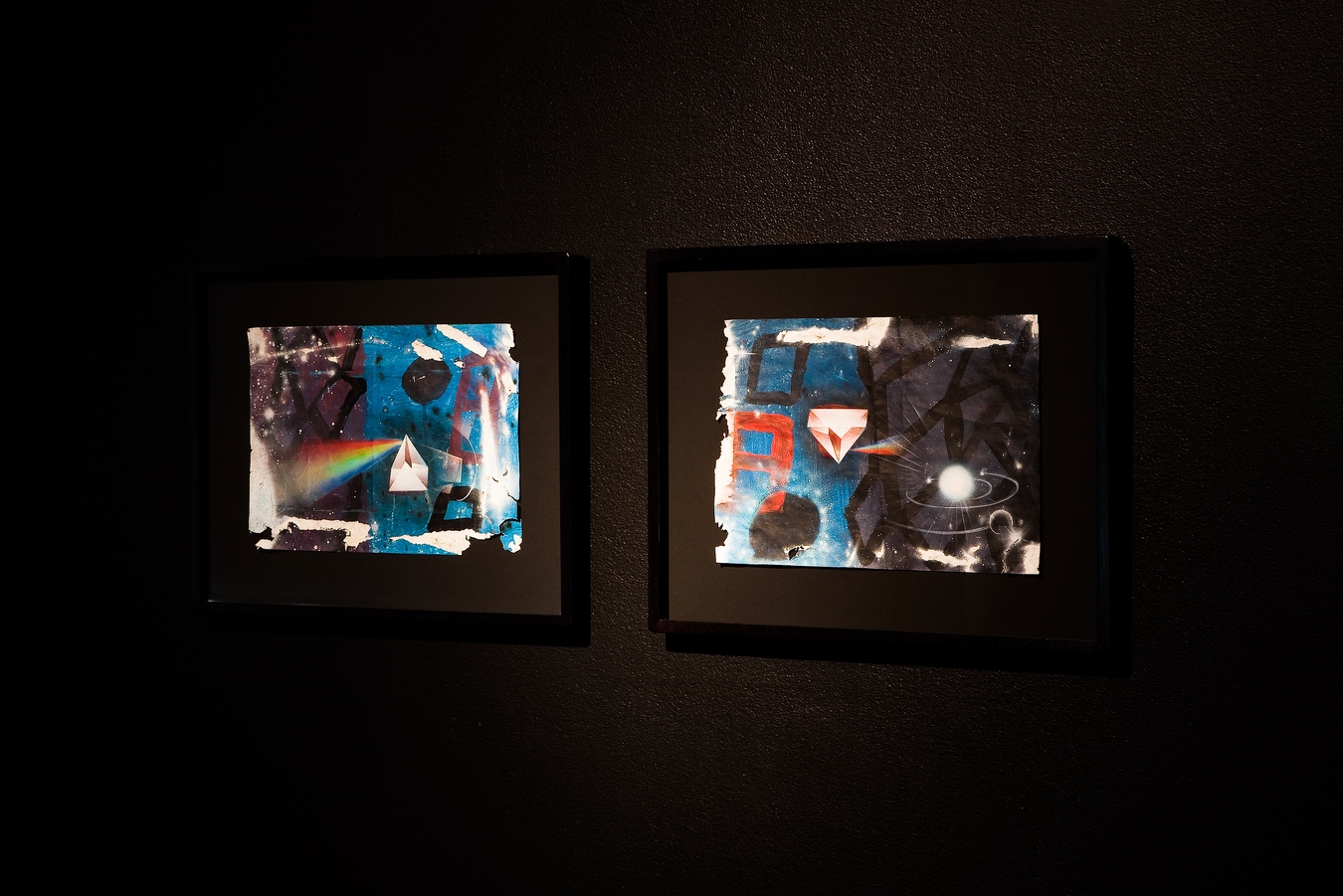 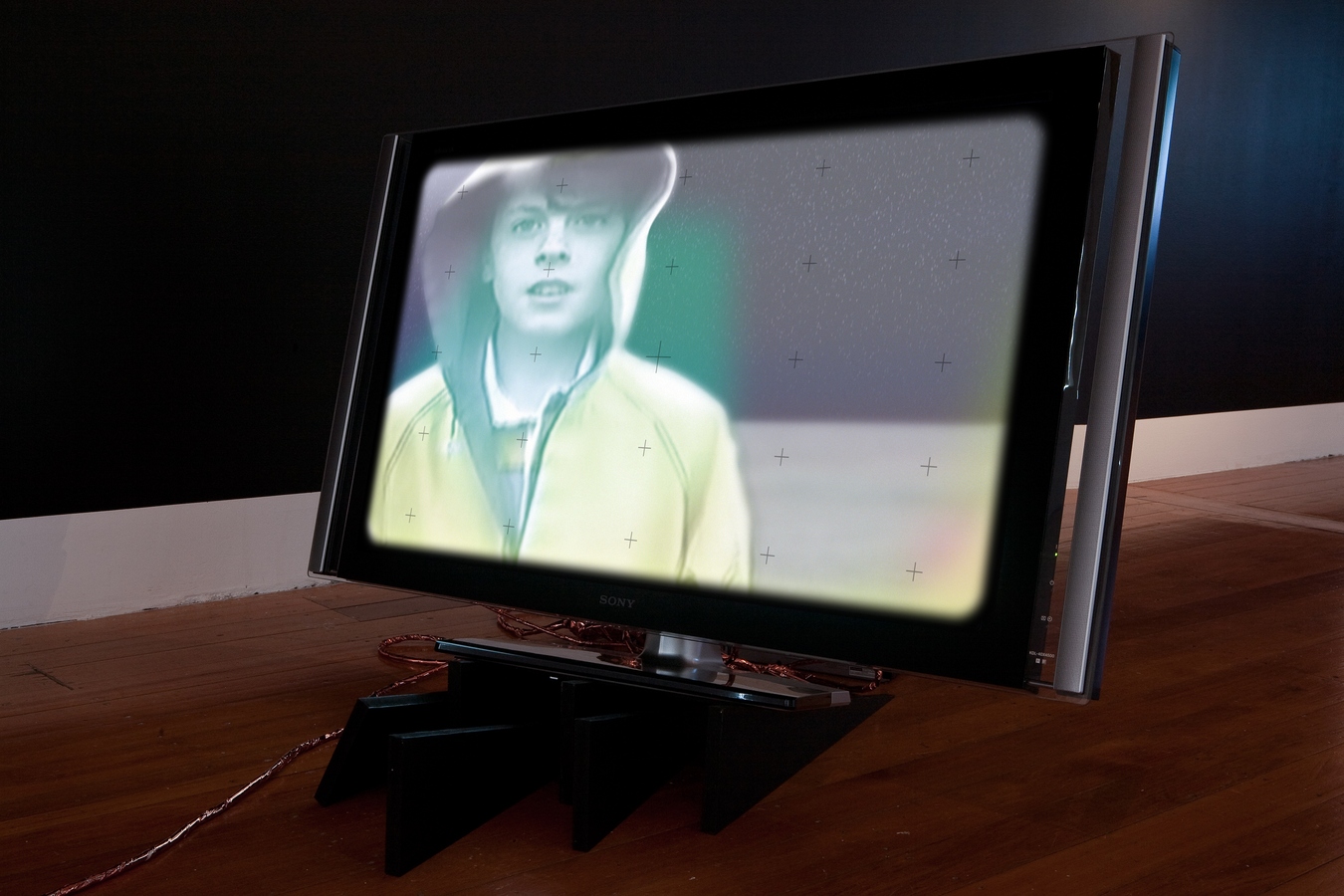 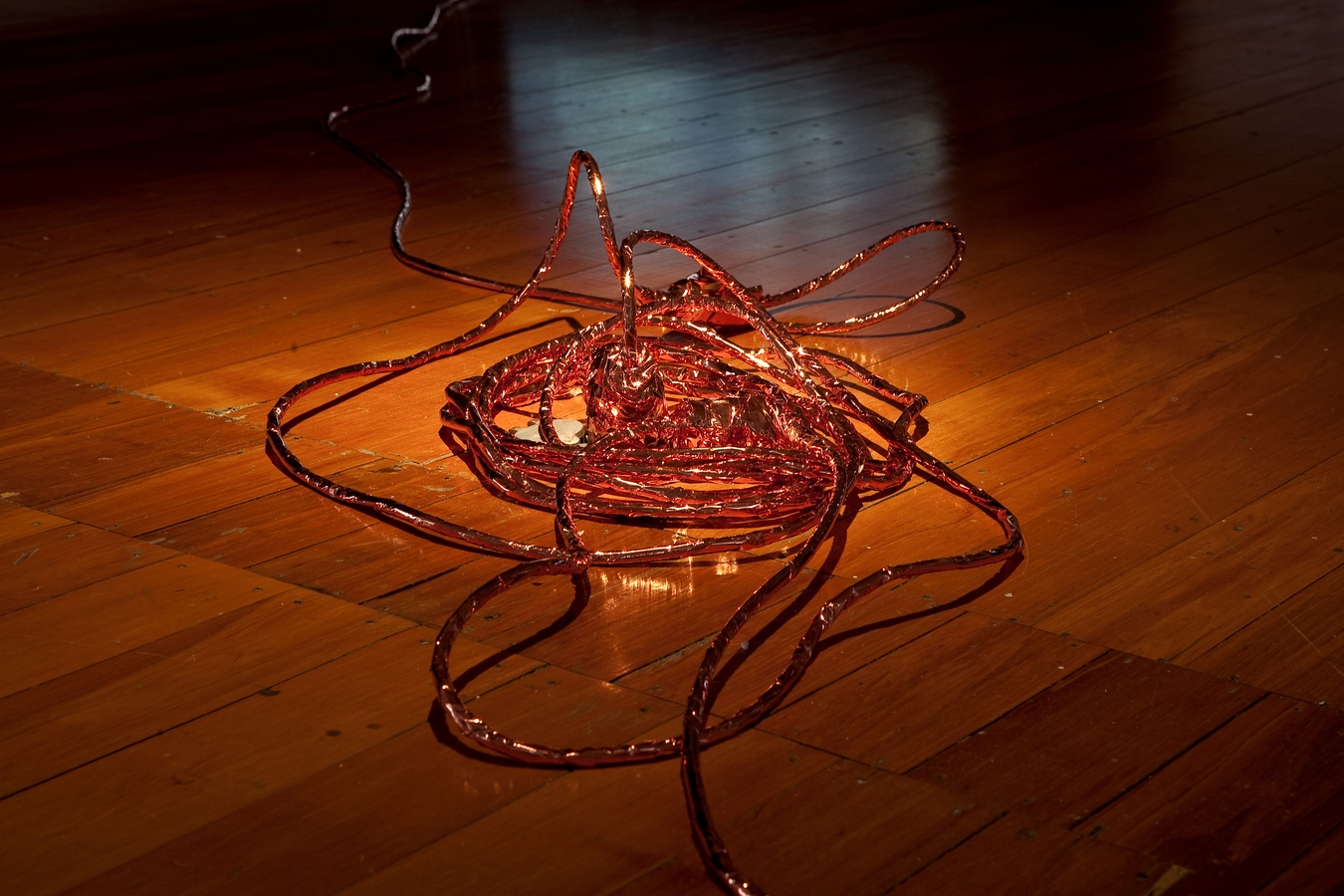 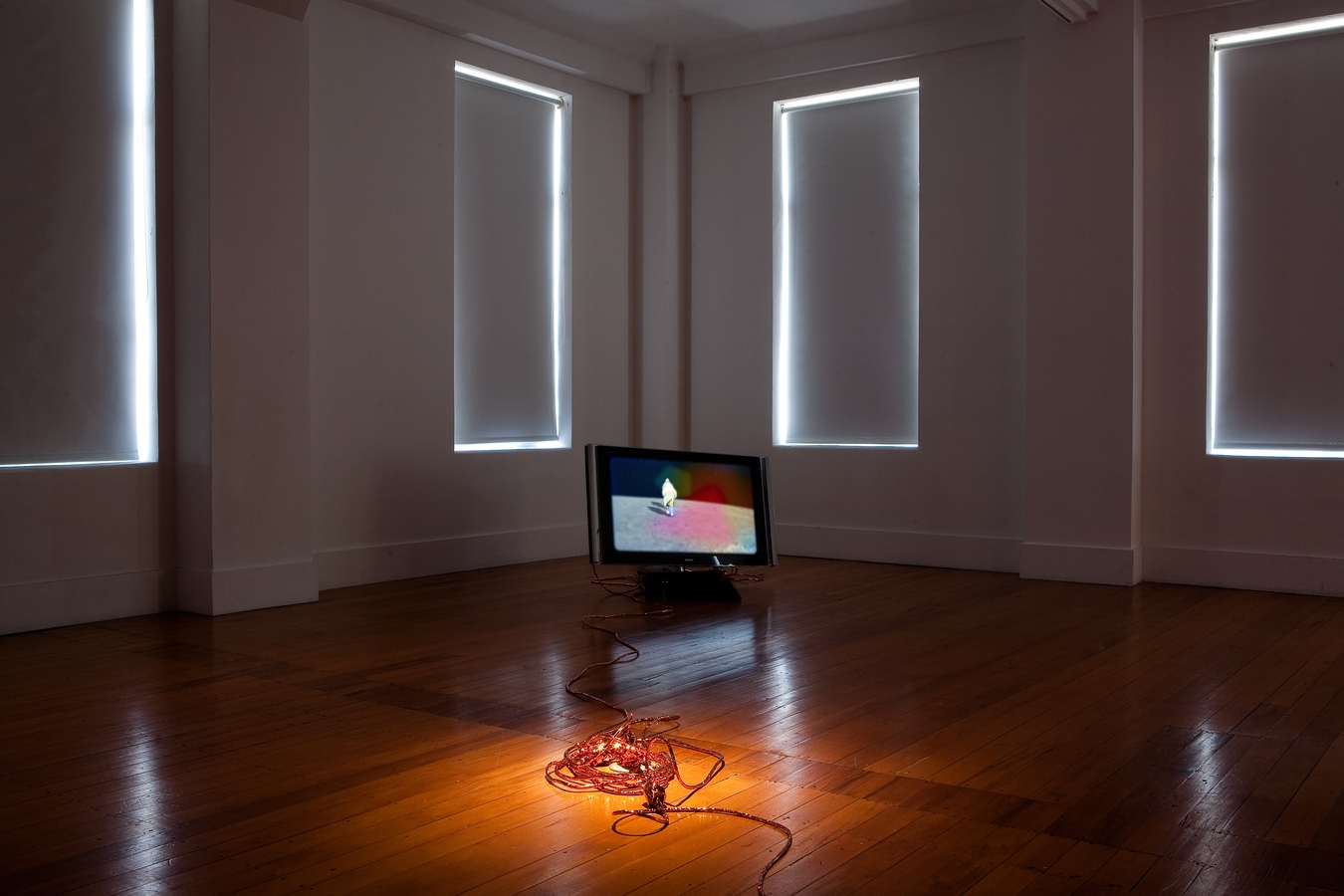 Expanding their collaborative practice even further across space and time, Ms. & Mr.’s New Zealand debut Physics is Pâté promises to meld elements of their recent work with brand new audiences on this side of the Tasman.

Currently based in Sydney, Ms. & Mr. have become well known for their retroactive collaborations with recorded traces from their former, unmarried, selves. Actively interpolating themselves into each other’s archival trace histories, for Physics is Pâté, Ms. & Mr. reference Kip Thorne’s 1994 book Black Holes and Time Warps, and his domestic analogy which involves Thorne’s wife, their living room, a spaceship and two mouths of a wormhole to illustrate what could happen in the event that a wormhole is created to act as a vehicle to traverse space-time.

This relatable, though presently impractical, scenario seems at first glance to be a useful extension of domesticity. However, Thorne goes on to elaborate the effect of time dilation on the couple, “Carolee can travel backward in time by crawling through the wormhole, climbing into another at-the-ready spaceship and fly out into interstellar space and meet her younger self.” It is at this potentially paradoxical moment, Ms. & Mr. also position their own domestic science fiction, “Here, we locate the opportunity to collaborate with an alternate, archival version of ourselves. By ‘restoring’ and altering our personal home videos and childhood drawings, we create alternate junctures and relationships in time, both liberated from and complicated by the linearity of chronology. In our universe, Physics is Pâté.”

Ms. & Mr. are currently undertaking their MFA by research at the College of Fine Arts, University of New South Wales and have recently returned from Paris after a three month residency at the Cite Internationale des Arts. In 2008 Ms. & Mr. were curated into Primavera at the Museum of Contemporary Art, Sydney, and in 2005 were awarded the Helen Lempriere Travelling Art Scholarship for their work The Woman Who Mistook Her Husband For Art installed at Artspace, Sydney. They undertook a residency and mentorship with Pierre Bismuth in Brooklyn, New York during winter 2006/07.

Solo exhibitions include: There There Anxious Future (2009) and Heavy Sentimental (2007) at Kaliman Gallery, Sydney and The Woman Who Mistook Her Husband for Art at Gallery Wren (2004). Ms. & Mr. have also contributed to a number of curated group exhibitions, projects and screenings in Australia, Bangkok, Berlin, Brazil, Hong Kong, and Toronto. Included in these are: Show me Your World at Gitte Weise, Berlin (2008) and Song of Sirens at The Ian Potter Museum of Art, Melbourne (2009). They are currently working on new commissions for Reality Check at Hazelhurst Regional Gallery (2009) and Illume at Campbelltown Arts Centre (2010).