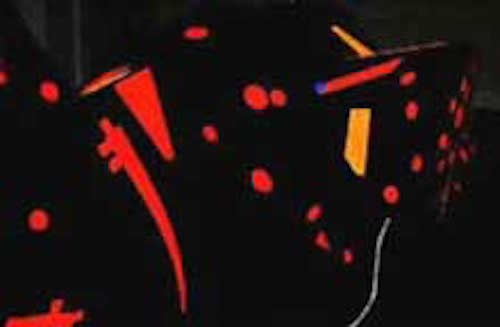 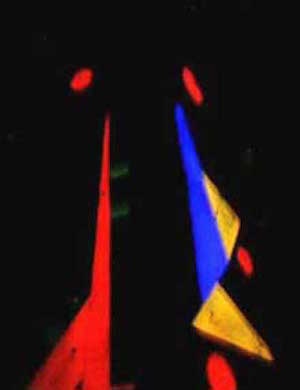 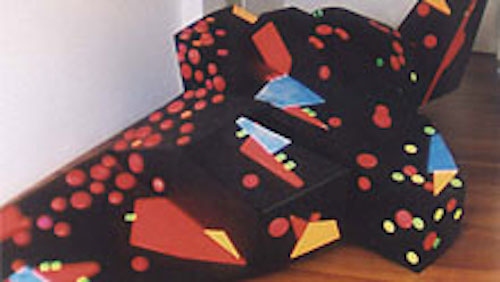 The second show in the Hard Sell series is Don’t Stop Till You Get Enough, by Dunedin based artist and interior designer Douglas Rex Kelaher, a founding member of influential artist run space The Blue Oyster Gallery. Kelaher merges his own artistic practice with his skill as a designer and manufactor to create detailed artificial environments which resemble film sets, or mockup interior models for fictional corporations. Slick and uber-minimal, these works refer to both the stark 60’s work of Donald Judd and Robert Morris and retro science fiction, being both beautifully constructed yet deliberately over-produced, sliding somewhere between simulation and reality.

For Don’t Stop Till You Get Enough Kelaher turns these minimal modes of practice on their head, with a large-scale work which positively screams ‘the eighties’. Taking the concept of overproduction to it’s very extreme, this oversized epic public sculpture is rendered in a palette of ultra Day-Glo, splattered over a giant wooden construction. In a quirky and twisted addition, the work comes complete with battens, offered up to viewers to wield against the sculpture, allowing audiences to vent all their frustrations with contemporary art and minimalism. Don’t stop till you get enough!

HARDSELL - BECAUSE YOU WANT IT!
DOUGLAS KELAHER - Artist Q&A
The Physics Room Annual, 2002