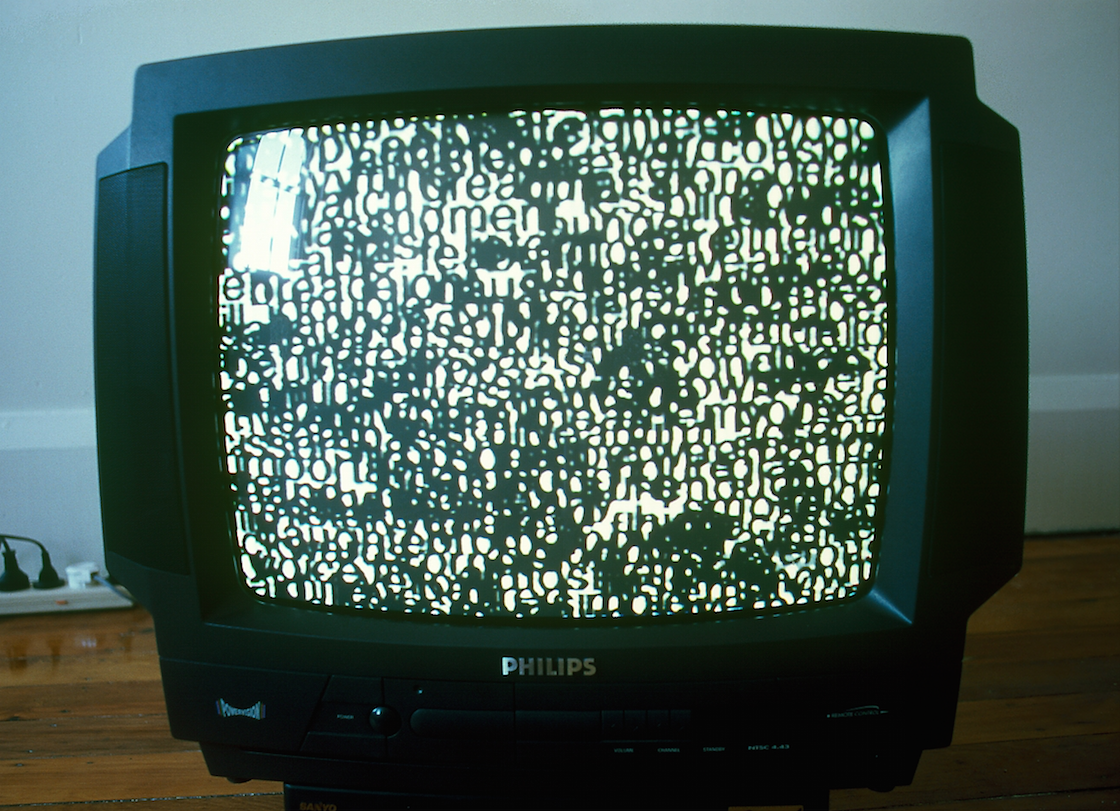 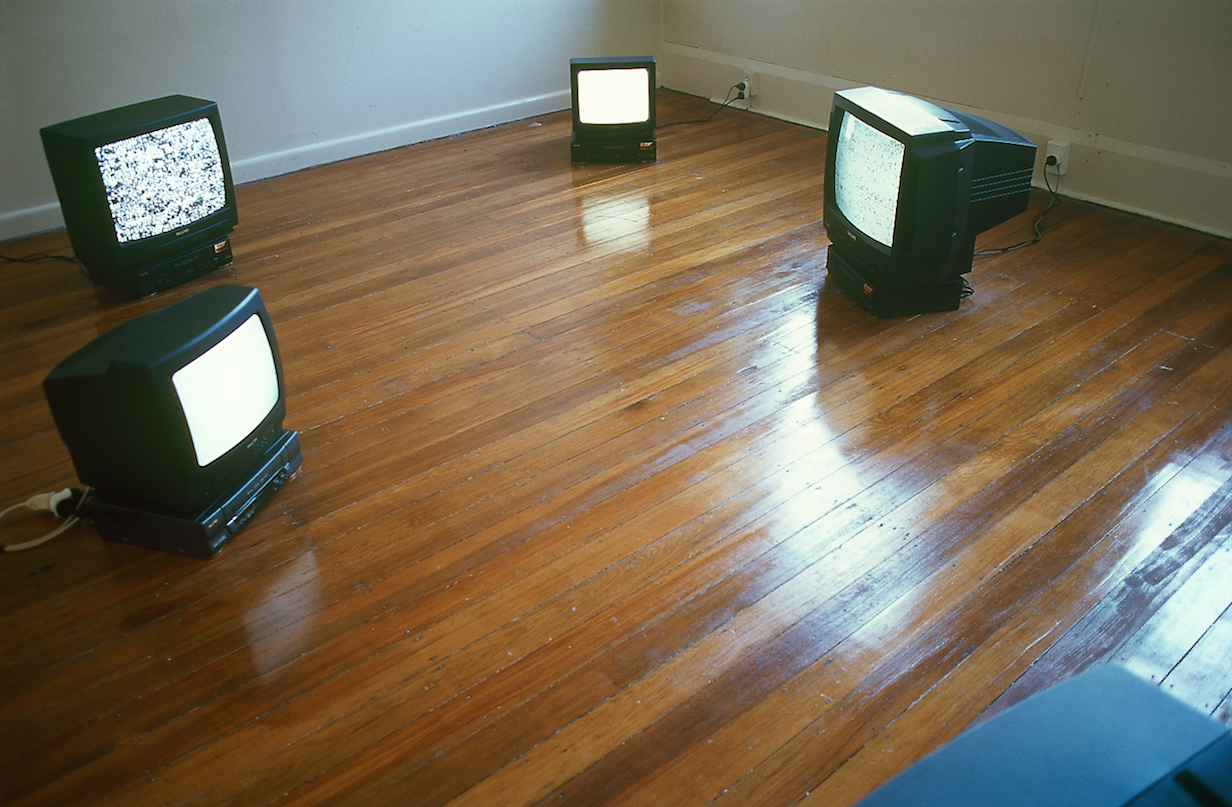 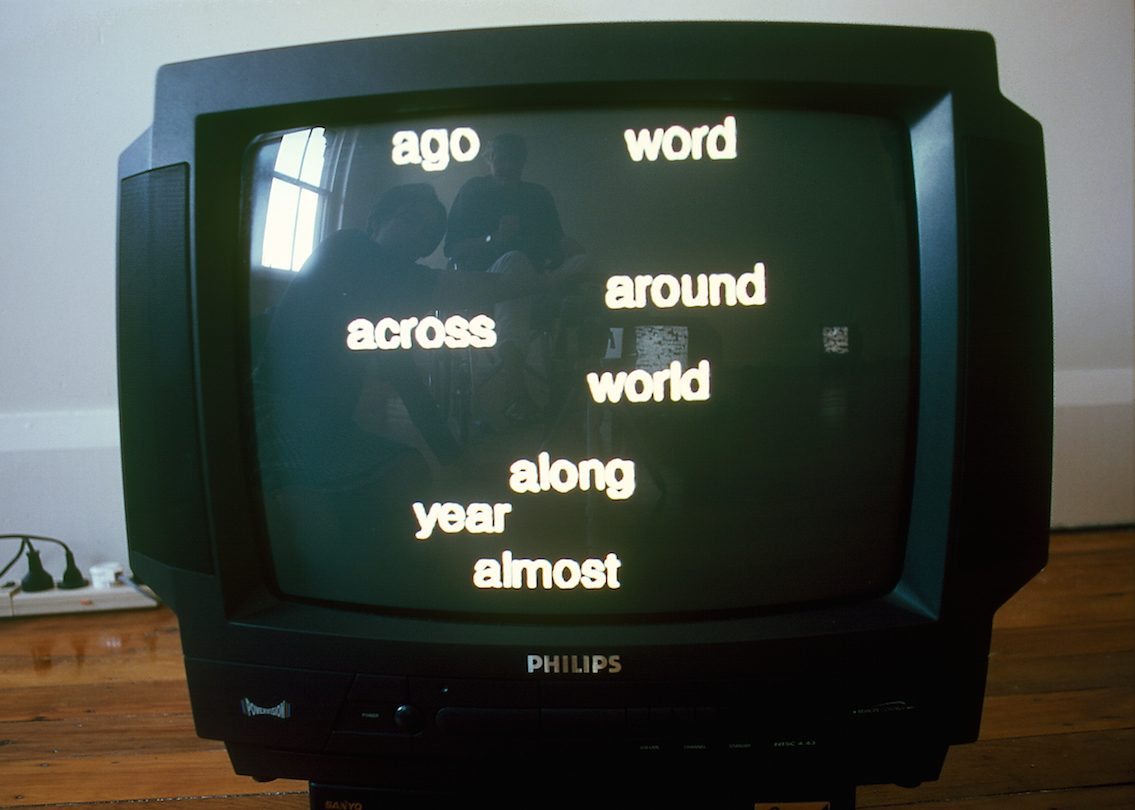 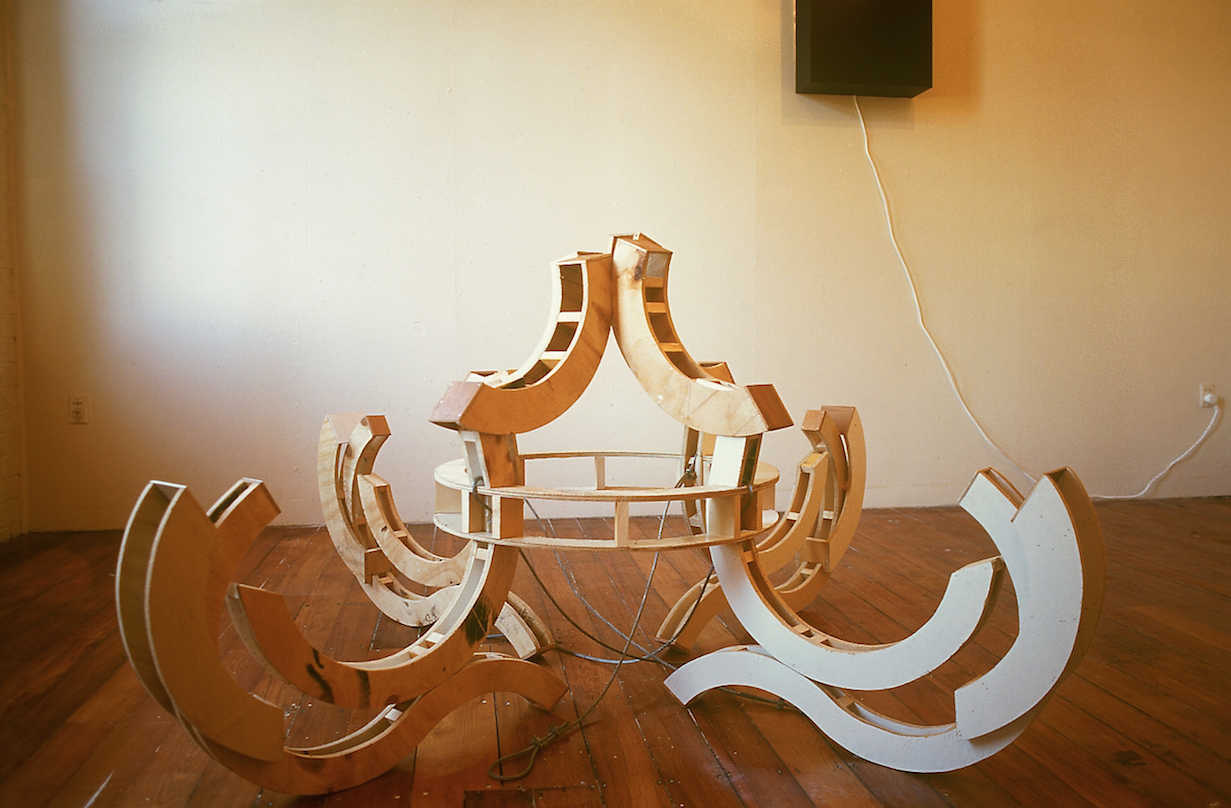 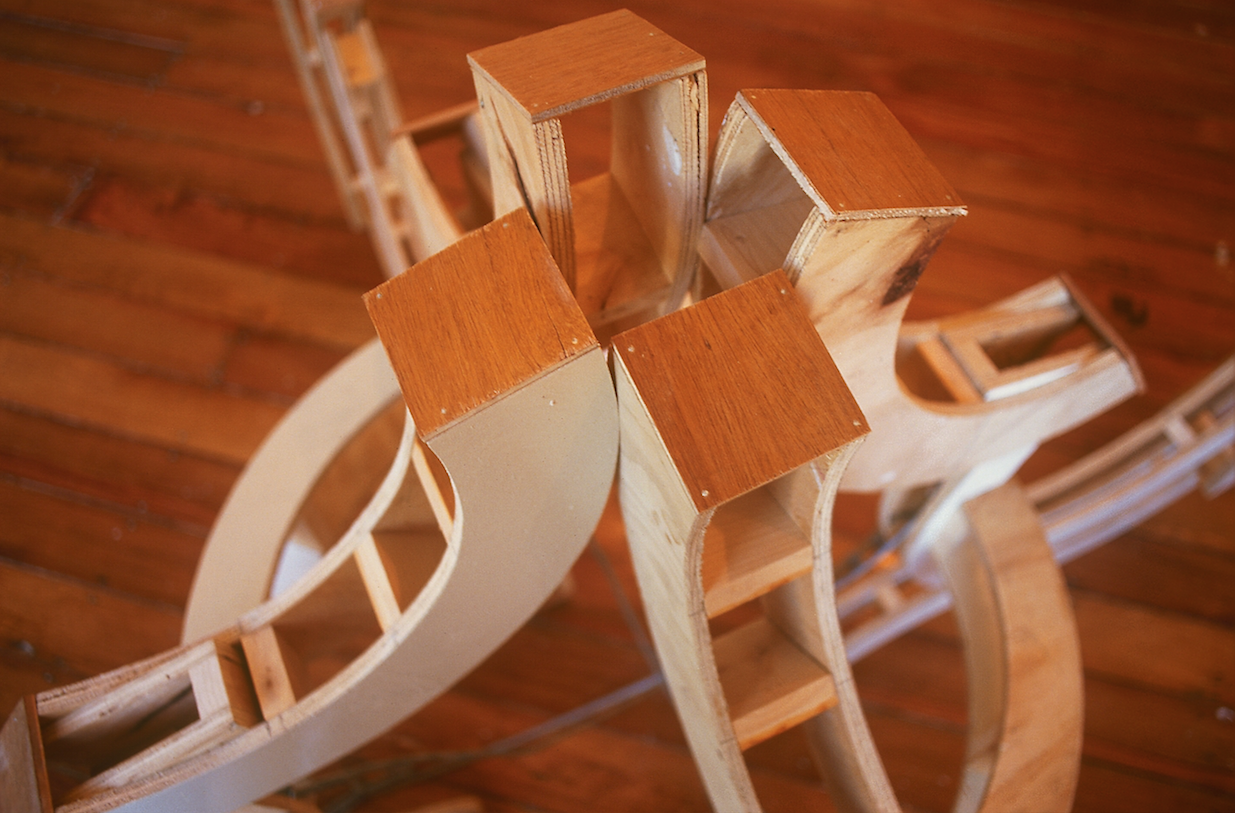 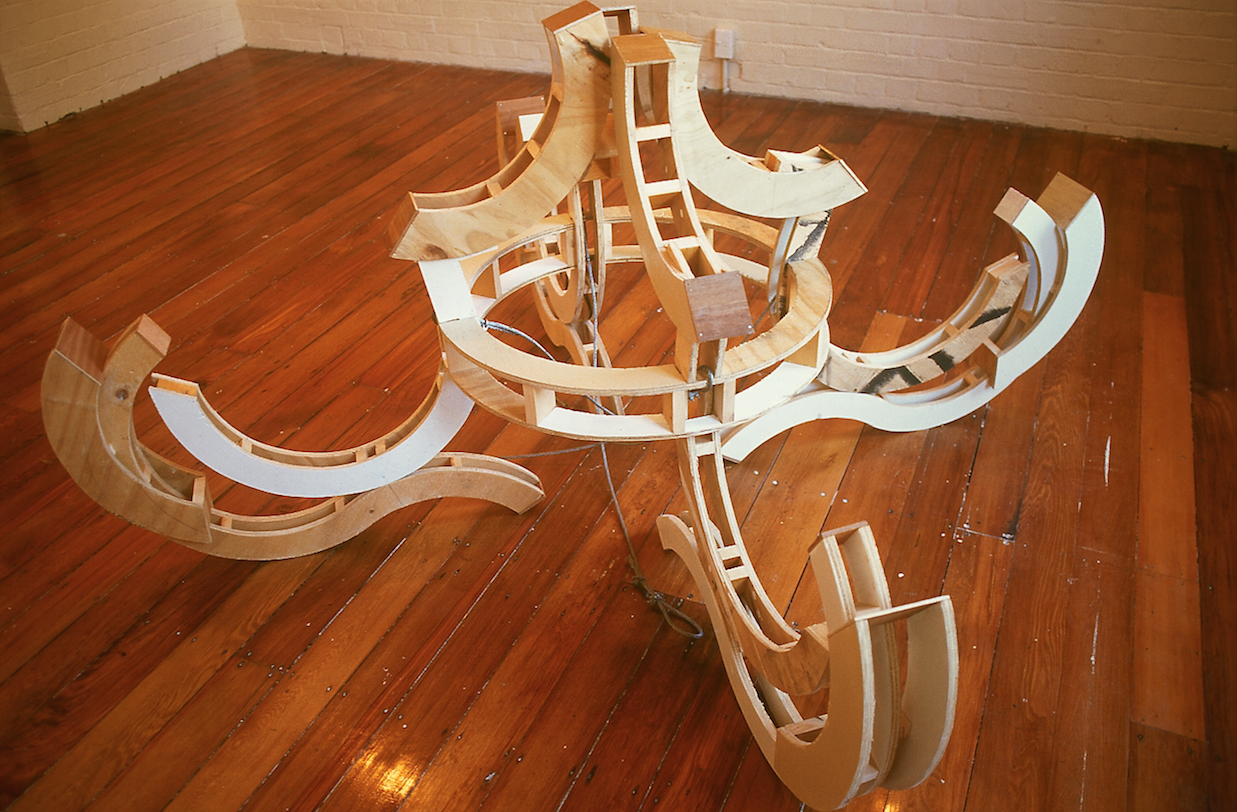 The two artists paired for the first of the three shows in 3x2 are at the beginning of their careers and both in their mid-twenties.

Joanne Moar is in her second year of a two year course at the Kunstakademie Duesseldorf in Germany, working with the artist Professor Magdalena Jetelova. She grew up in Canterbury, and graduated from the University of Canterbury School of Fine Arts in 1993.

Her work presents us with language, written and spoken. As single words are printed on the screen and spoken by recorded voices, you could see them as being treated with the methodical abstraction of some academic study. Her recent work has in fact made use of learning material developed for students of English as a foreign language, in particular a list of 1000 words which are claimed to be the core vocabulary of English. The connotations of study might evoke these rooms' original use as part of Canterbury University College. (The College was the precursor to the University of Canterbury, which relocated from what is now the Arts Centre to the suburb of Ilam).

Depending on what language is native to you, you might see this work in different ways. For an English speaker, the individual words each bear meanings, but through the continuous overlaying and repetition, they become indistinguishable and meaningless. The resulting noise and confusion might alienate even native speakers from their own language. Moar says of her work, "...traditionally New Zealanders have been primarily mono-lingual, seldom confronted by another language. On one level the work presents for native English speakers an experience of being a foreigner to their own language, but in a more general and fundamental way the work is a metaphor for the confusion, multiple meanings and misinterpretations that emerge from the process of lingual communication."

Jim Speers has spent many hours in hotel kitchens, cloakrooms and foyers, setting places and carrying bags. He completed a degree in sculpture at the University of Canterbury School of Fine Arts in 1992. He is currently based in Wellington.

His sculpture at once represents the glamorous veneers that surface public buildings, and makes an expose of some of the grime, flimsiness and rough edges that get swept under the carpet. An industrial-sized chandelier, for example, sits like a giant kitset assembled and ready for mounting, a patchwork of woods and paints - plywood, Dijon, off-whites and pencil scoring - a patently hand-made version of a commercial fitting. Perhaps here you could make out decorative art, traditional design - a fleur de lis - decayed or evolved through mass reproduction.

As with Moar's work, there is a direct link to the experience of the tourists who visit us here and to whom the Arts Centre in general is now set up to cater. The atmosphere and architecture of hotels, restaurants, even tour buses and their coachwork, cigarette machines or wall panelling, are all brought into play alongside traditional visual and sculptural artistic concerns of object making and painting.