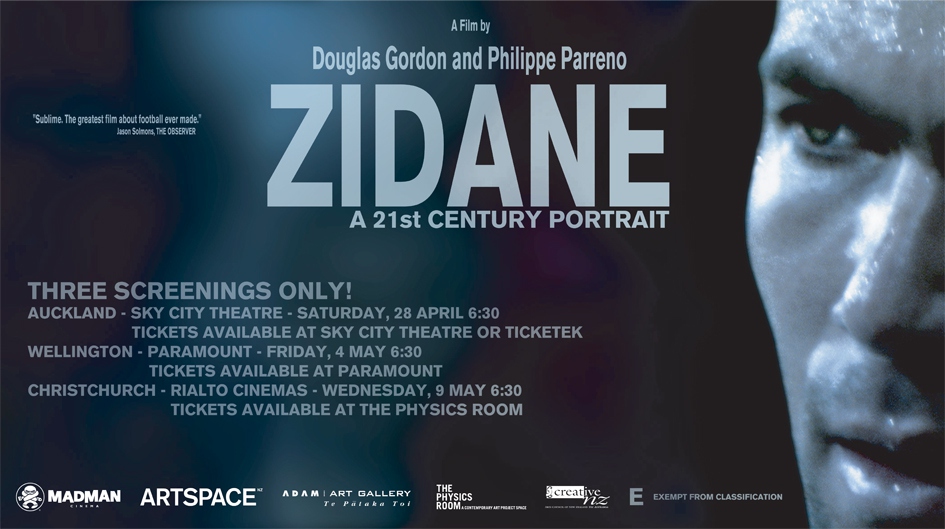 One of the most acclaimed films in the Cannes Film Festival ZIDANE: A 21ST CENTURY PORTRAIT is Douglas Gordon's and Philippe Parreno's sensational cinematic portrait of the world famous French football hero Zinedine Zidane. Filmed during a Real Madrid match (versus Villareal on April 23, 2005) in the Santiago Bernabeu stadium, it's 92-minute length equals exactly that of the actual game, but contrary to traditional television broadcasts, it is not the ball which is the focal point of the action. Instead, 17 synchronised cameras distributed around the entire stadium are directed solely on Zidane.

"It all started exactly nine years ago, in 1996. It started in Jerusalem. It was Haifa. I can't remember exactly the genesis of the thing, but we were playing football, we talked about football and after that we'd email about football, and if I was in Paris it just so happened that whenever I'd come to Paris there were amazing games. Before 1998, we had already decided we wanted to do something. We made a decision to do something with Zidane, I'd say in 1997."
- Douglas Gordon

"The day of the shooting, some interviews of the players of the opposing team were published, they said that they would do everything they could to keep Zidane from playing a good game, so that we wouldn't have much to film. So in a way, the fact that we were shooting influenced the event, and that was slightly traumatizing.."
- Philippe Parreno.

The affecting soundtrack includes the roar of the crowd accompanied by Mogwai, the Scottish band formed in 1995, who have become one of the most influential post-rock bands. It's a footballer and football, as you have never seen them before...

ZIDANE: A 21st CENTURY PORTRAIT presents a different approach to the sports film, creating a real time portrait and a far reaching, in-depth film, focusing on one of the greatest soccer players of the century: Zinedine Zidane. During the entire 92 minutes of a Real Madrid vs. Villarreal match, seventeen super-35mm Scope format cameras were set around the Bernabeu Stadium focusing solely on Zidane, who agreed to become the centre of attention for this out-of-the-ordinary, full-length feature film. In this film, the viewers are plunged into all facets of the universe, the psychology and the body of an athlete in action - an incomparable and breathtaking experience.

The team behind the seventeen cameras include operators who have worked in film with the likes of Martin Scorsese and Oliver Stone, as well as some of the world's top sports camera operators including those that work for NFL Films and Major League Baseball. Additionally, two of the cameras where equipped with high definition zooms used only by the US Army until this film.

THE PROTAGONIST
Zinedine Zidane
Born on June 23rd, 1972 in Marseille, Zinedine Zidane is undoubtedly one of the
most elegant and compelling of any current footballer. He had a stunning career and ranks as one of the top five players of all time. He has won the World Cup Championship in 1998, the Tournament Euro 2000, the Champions League 2002 and a "Ballon d'Or". Showing the determination of an athlete who wants to exceed expectations, Zinedine Zidane played his first game in First Division at the age of 17 and it was from then on that football went from an interest to a passion. In 2001 he became the most expensive player in football history when Real Madrid acquired him for 66 million dollars. The talent of Zinedine Zidane is enough to make him a legend, the aesthetic purity of his game made this portrait necessary.

Douglas Gordon
The work of Douglas Gordon, born in Glasgow, epitomises a new fluidity, which has developed between video and film in contemporary art. Douglas Gordon was awarded the Turner Prize in London, 1996, the Premio 2000 at the Venice Biennale in 1997 and the Hugo Boss Prize in New York, 1998. He has recently had major shows at the Musee d'Art Moderne de la Ville de Paris, the Tate Liverpool and the Museum of Con- temporary Art in Los Angeles. His work is in the major collections of the Tate Gallery, the Centre Georges Pompidou (France), the New York Guggenheim Museum (USA) and the Hirschorn Smithsonian Museum in Washington D.C.

"The most purely enjoyable event at the Cannes Film Festival. By the end, Zidane has achieved the charisma and mystery of the hero from some lost Shakespeare play".
- Peter Bradshaw, THE GUARDIAN

"A remarkable new film. A unique portrait of the French footballing icon. Picturing the subject with all the detail, poise and human compassion of a Velasquez or a Degas. A work that pierces the soul of the human condition."
- Jason Solomons, THE OBSERVER

"The most striking film of the whole 13 days.mesmeric, enveloping, a multifaceted portrait that goes way beyond mere football. Immediate yet somehow haunting, it's one of the year's essential cinema experiences".
- Trevor Johnston, TIME OUT