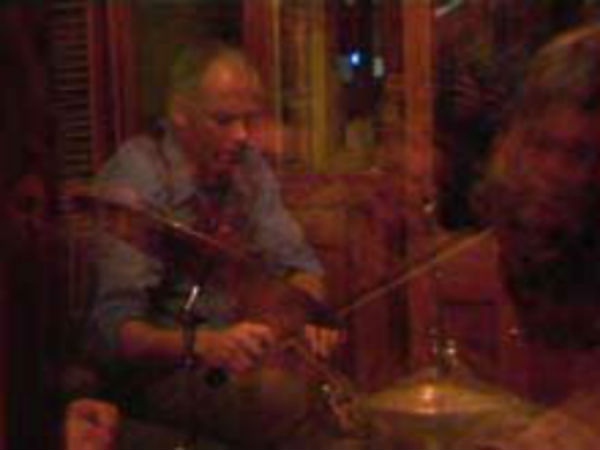 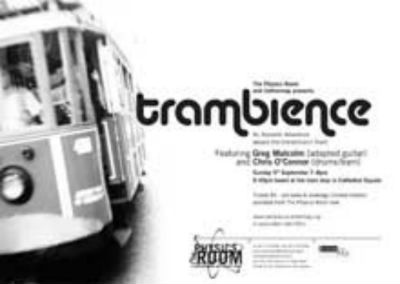 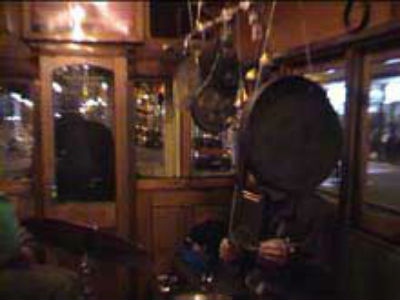 Trambience is an acoustic adventure - a celebration of public transport and discovery through aimless traveling.

In this second event of the Trambience series, local sound artists/musicians Greg Malcolm and Chris O'Connor will perform for a limited audience of 50, on board one of Christchurch’s beautifully restored heritage trams.

The tram will provide an intimate and unusual venue for live audio performance, adding the sounds of the city’s streets and the tram’s own rumble, rattle, and bells to the musicians’ palettes.

Greg Malcolm is a local guitarist, composer and improviser, whose hypnotic evolving melodies and layered drones will develop the sounds of the tram’s journey through the city. Chris O'Connor is an improvisational drummer, who will physically explore the acoustic space and motion of the tram.

Join us on the Christchurch Tram on 5th September at 7pm for an acoustic urban journey.

Following Trambience the audience will be invited to Creation, at 105 Worcester St, for the first of four evenings of the sound-art series Static Mansion.

Trambience is a co-production of ((ethermap and The Physics Room and is held in collaboration with RDU.

Trambience sound artists …
Greg Malcolm (Guitarist, Composer and Improviser) brings his unique adapted guitar and drone-based improvisationary style to the tram. Malcolm's sound consists of hypnotic evolving melodies that are built upon layered drones, (created by mini fans, e-bows and floor guitars). The melodies utilise a variety of tones and sounds created on Greg Malcolm's unique adapted electric guitar created by New Zealand Luthier Peter Stephens. The compositions and improvisations are specifically designed to accentuate the beauty inherent in the innovations developed within this guitar. Other than the e-bow and fuzz box all sounds are created live and organically by string manipulation techniques. Greg Malcolm is an accomplished guitarist with an extensive music history. He has composed, performed and recorded music for short films, theatre and is featured on many LP's and CD's. He has toured Europe in 1995 and 2003 -2004 and performed extensively throughout New Zealand at art galleries and music venues.

Chris O'Connor (Drummer) will transform the tram into a traveling drumset, physically exploring the space and its acoustic properties. Originally based in Wellington, he has been much in demand for his rhythmic spontaneity and painterly approach to the drumset. O'Connor's fresh sound has seen him work for David Long and Plan 9 in various projects for television (the Strip, Insiders Guide to Happiness), film (Perfect Strangers, Fellowship of the Ring, Tongan Ninja), musical theatre (Threepenny Opera, Blue Smoke) and dance (Alice - Royal NZ Ballet). In 2001 he won Best Original Music at the Chappman Tripp Awards for his work on the play "Irish Annals of Aotearoa". He has recorded, performed and toured with a myriad of New Zealand artists and groups including Campbell Kneale (Birchville Cat Motel), Village of the Idiots, Richard Nunns, and Trinity Roots.