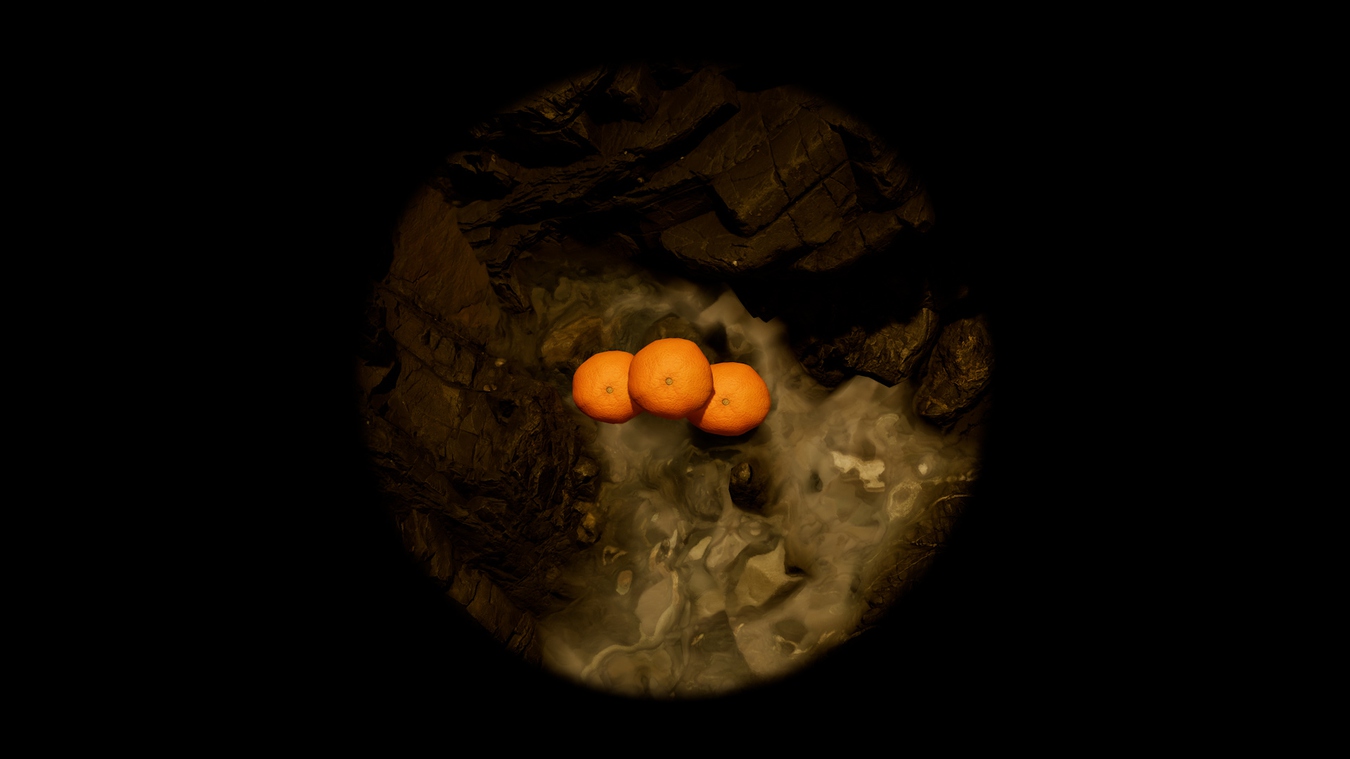 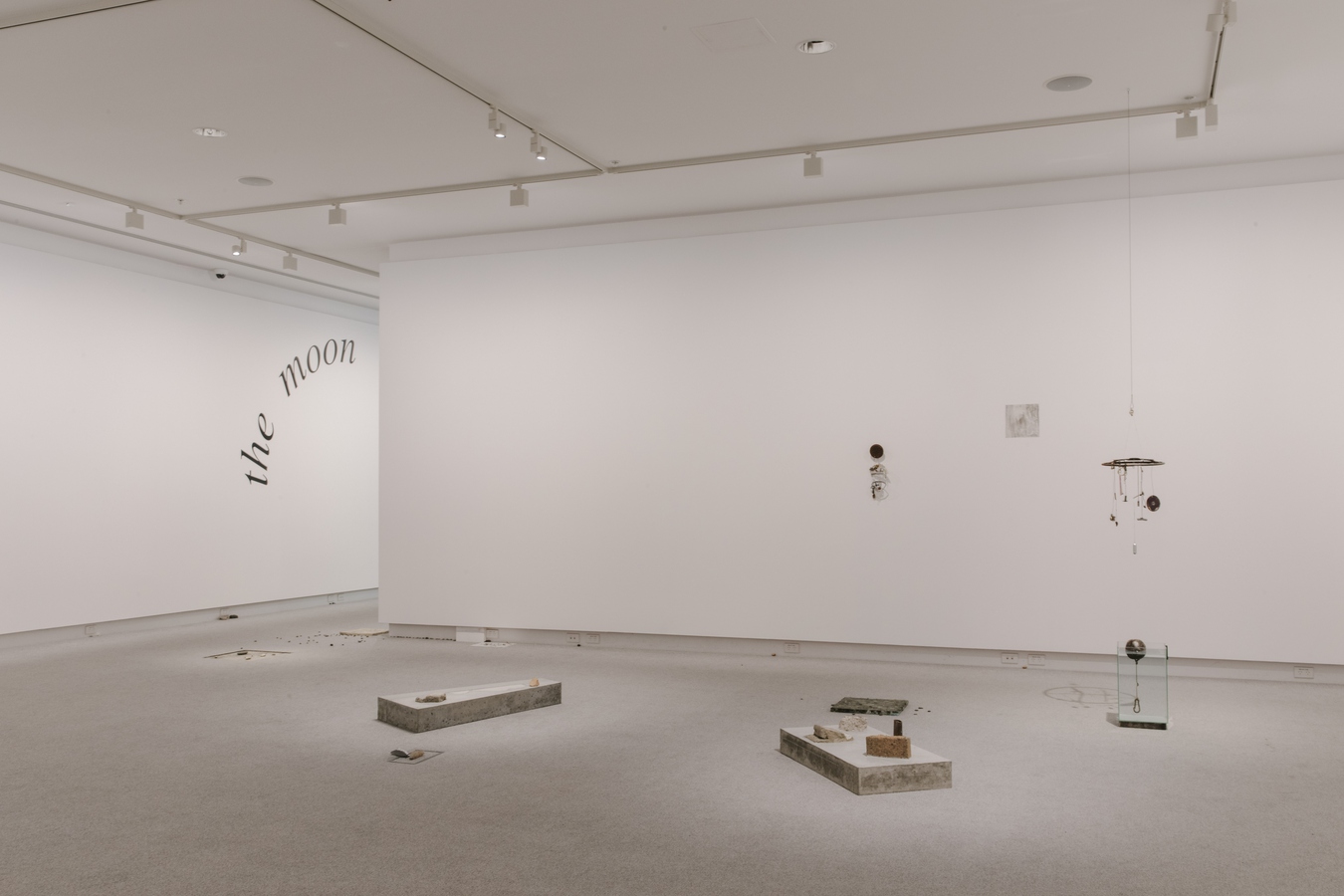 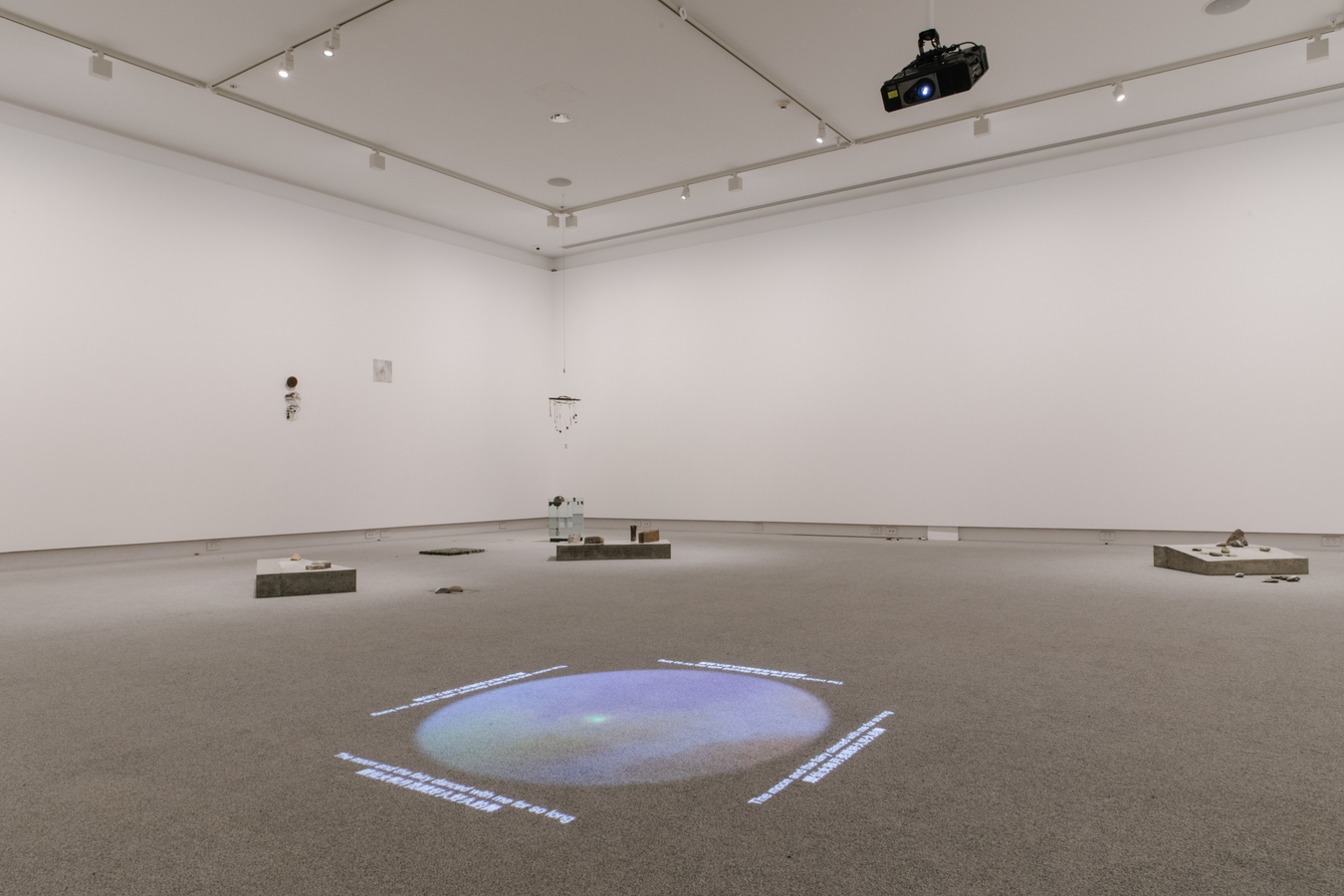 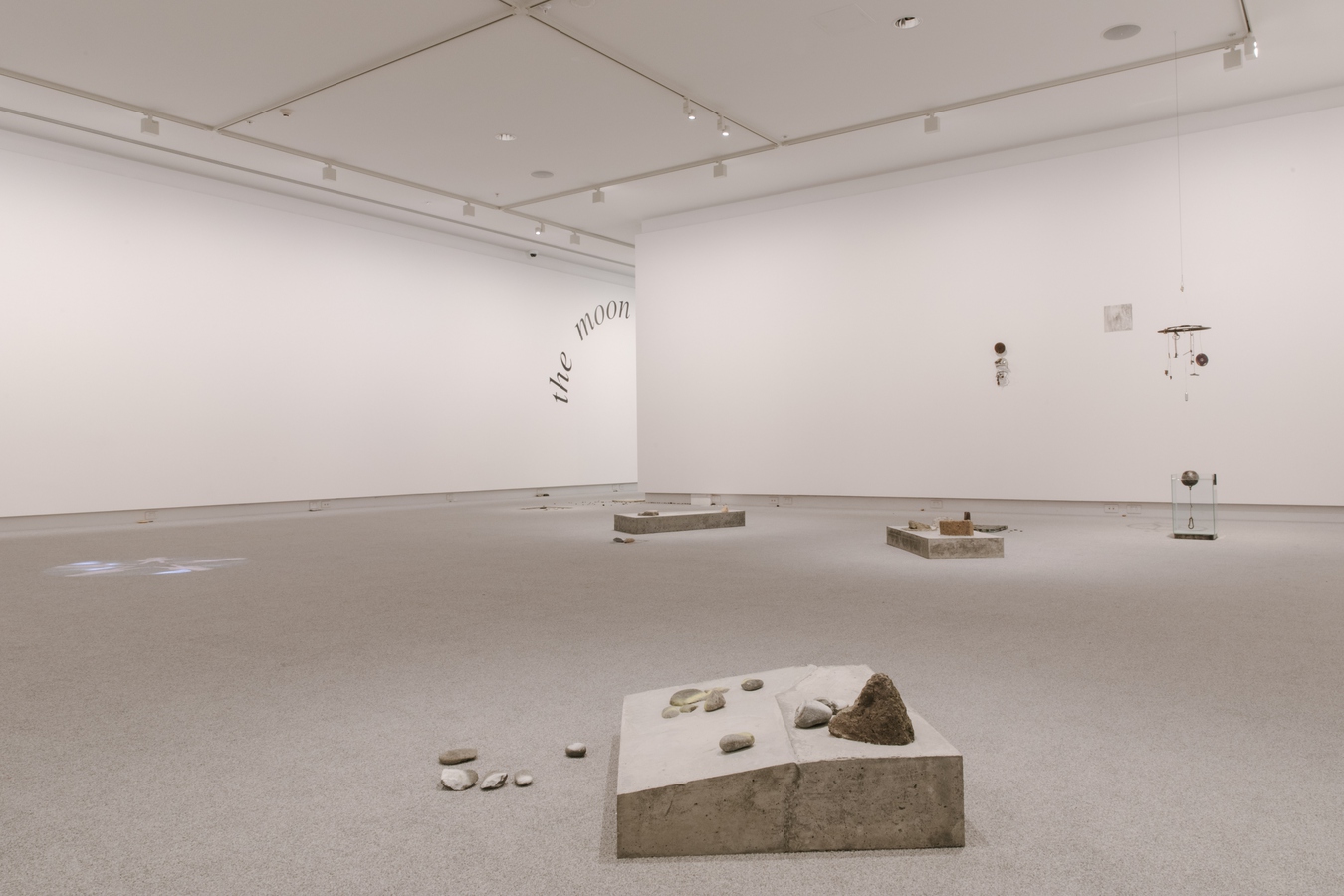 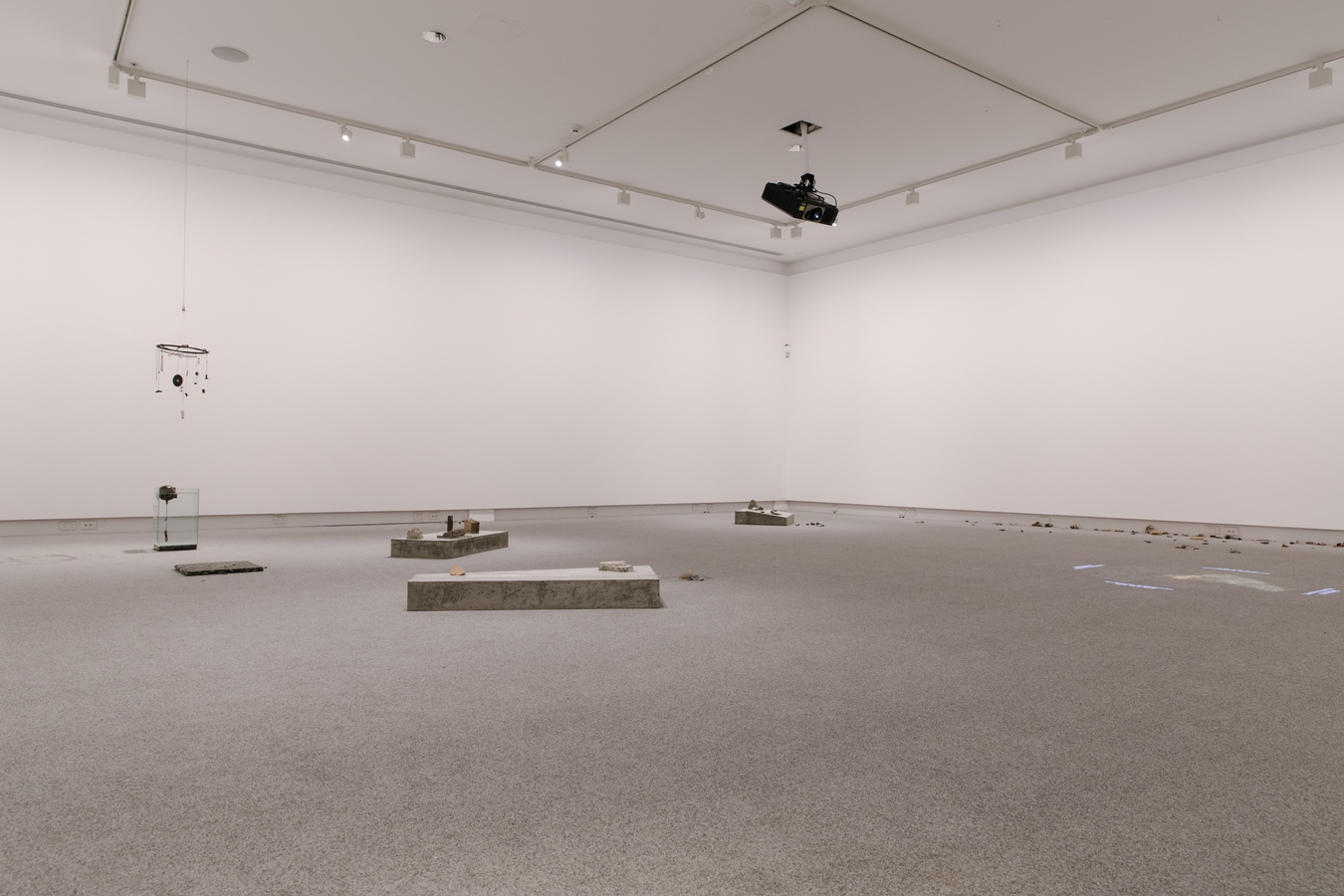 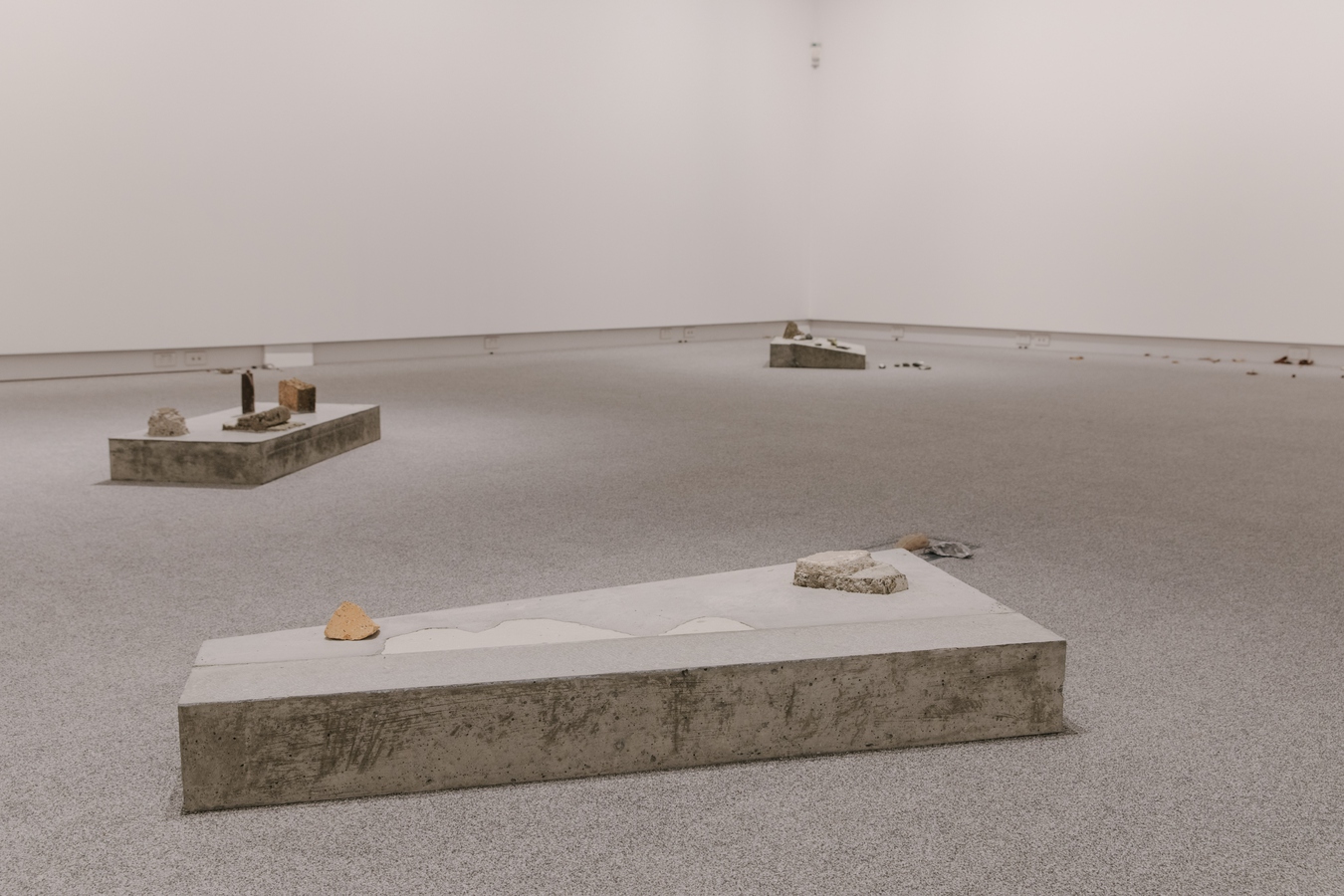 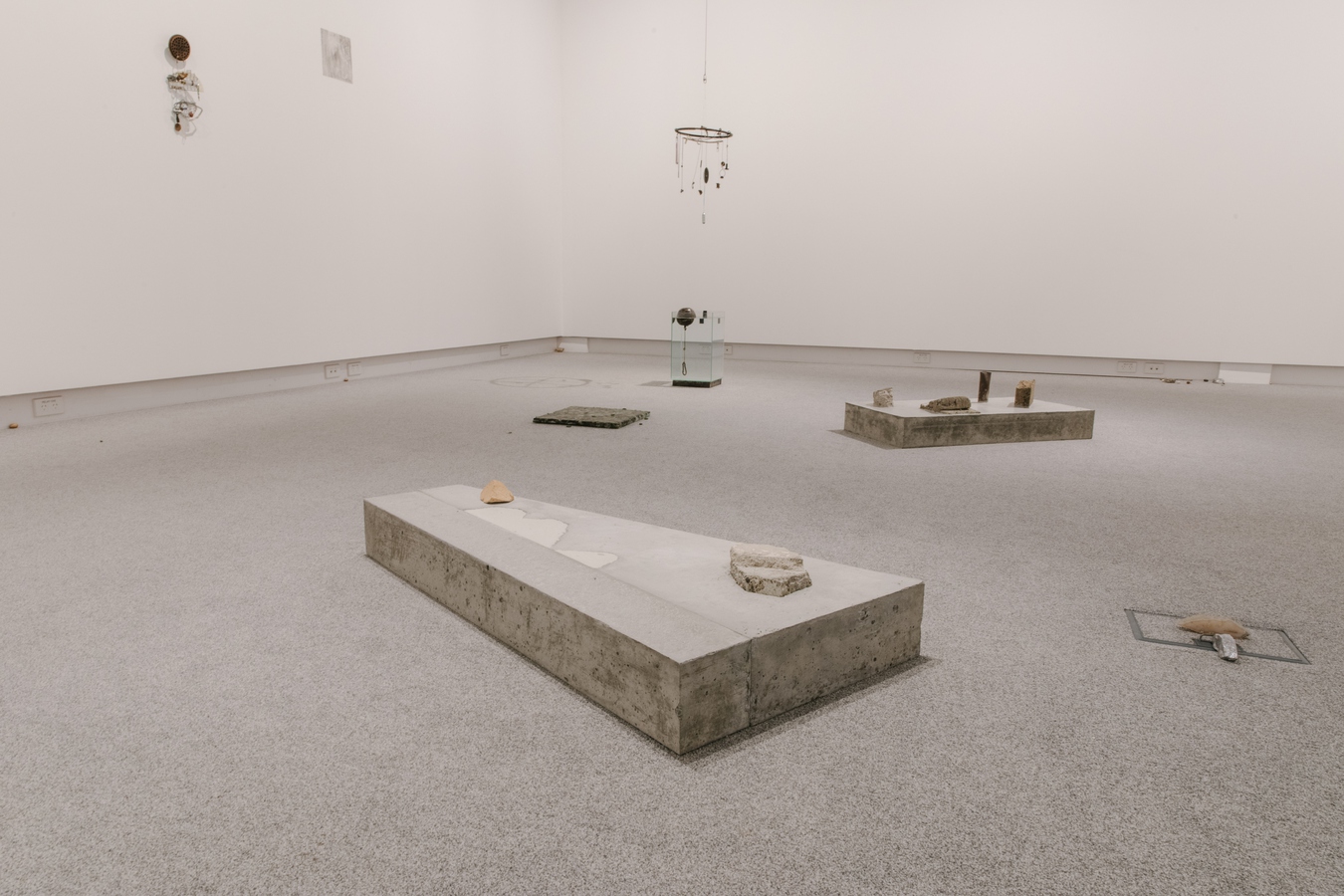 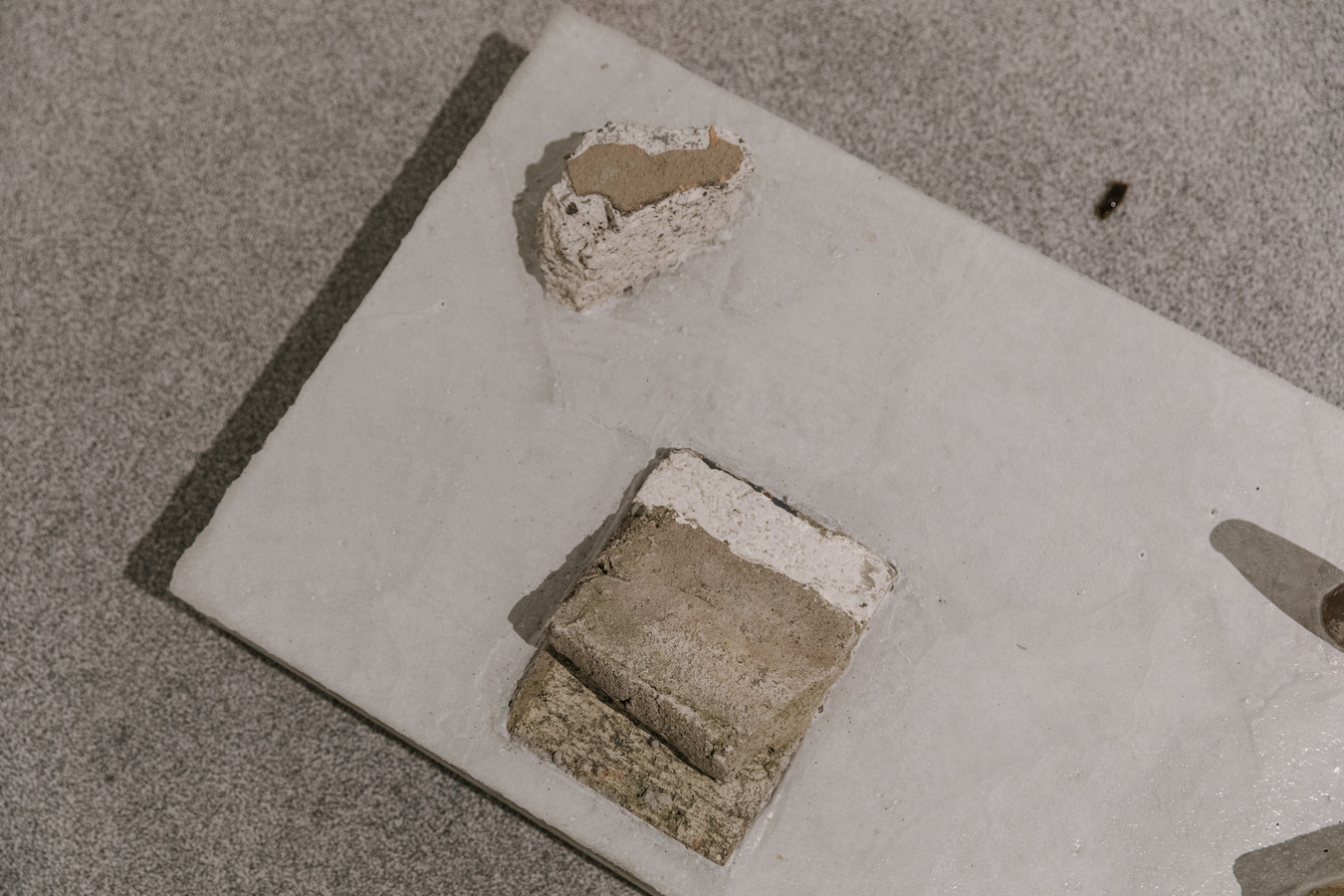 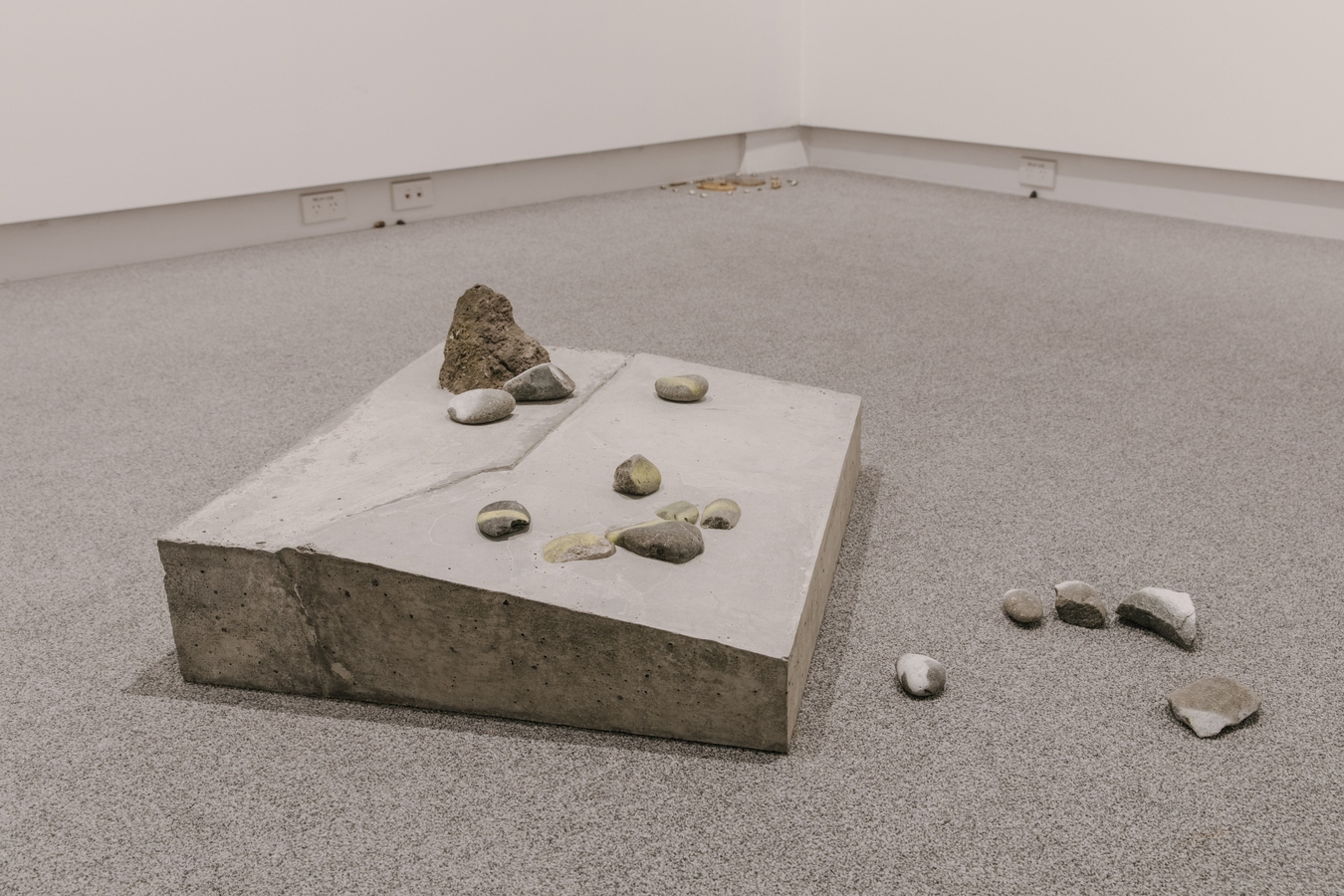 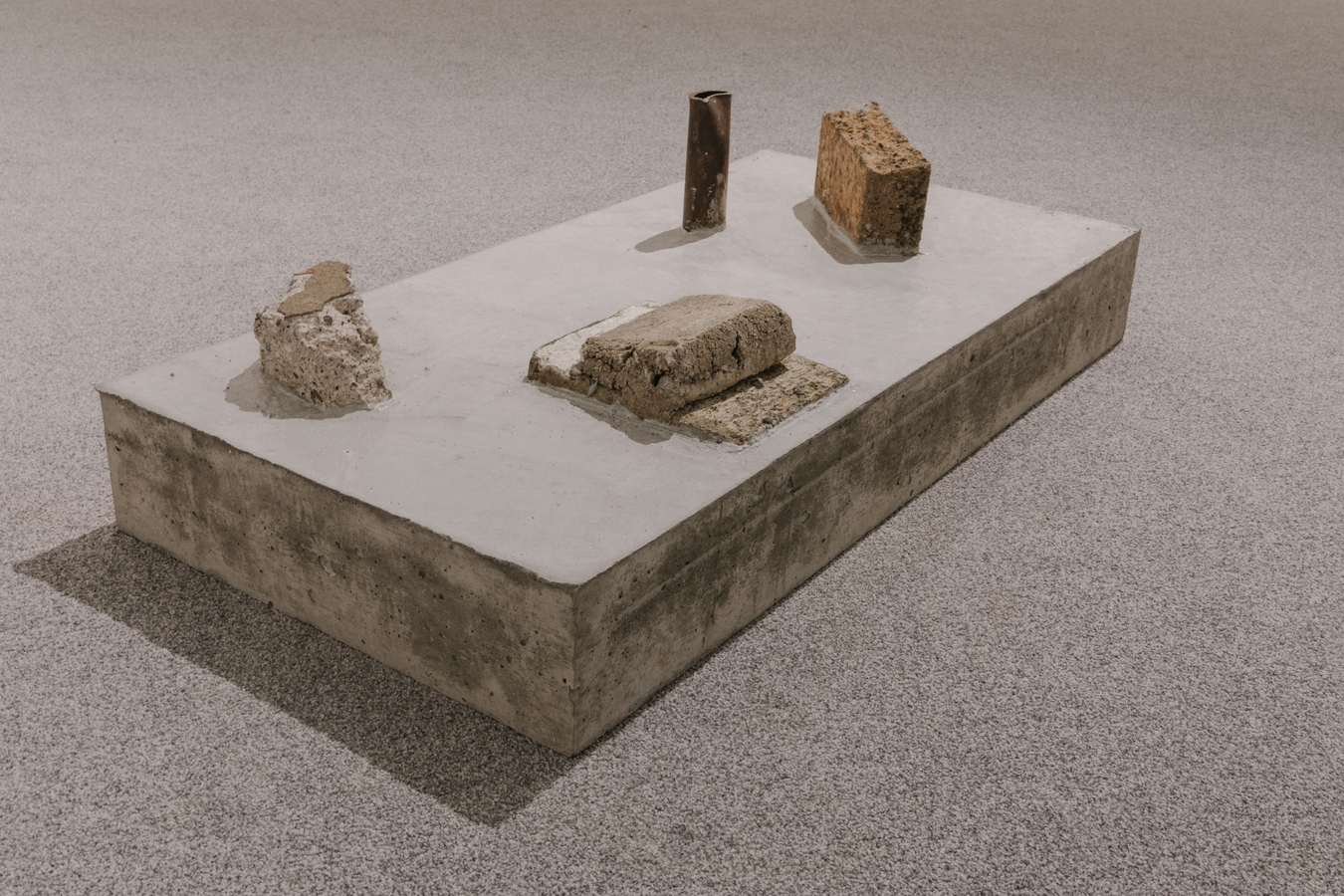 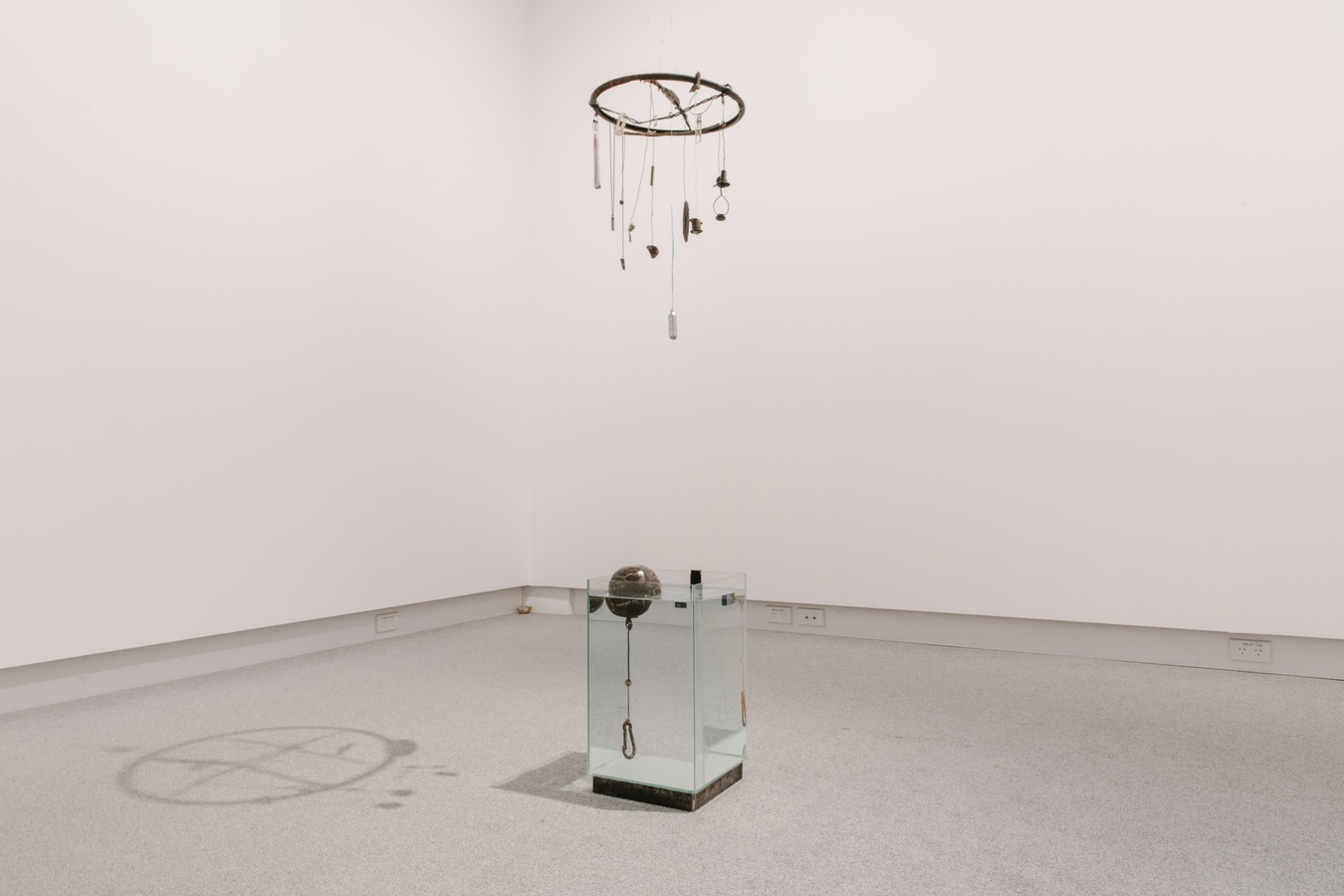 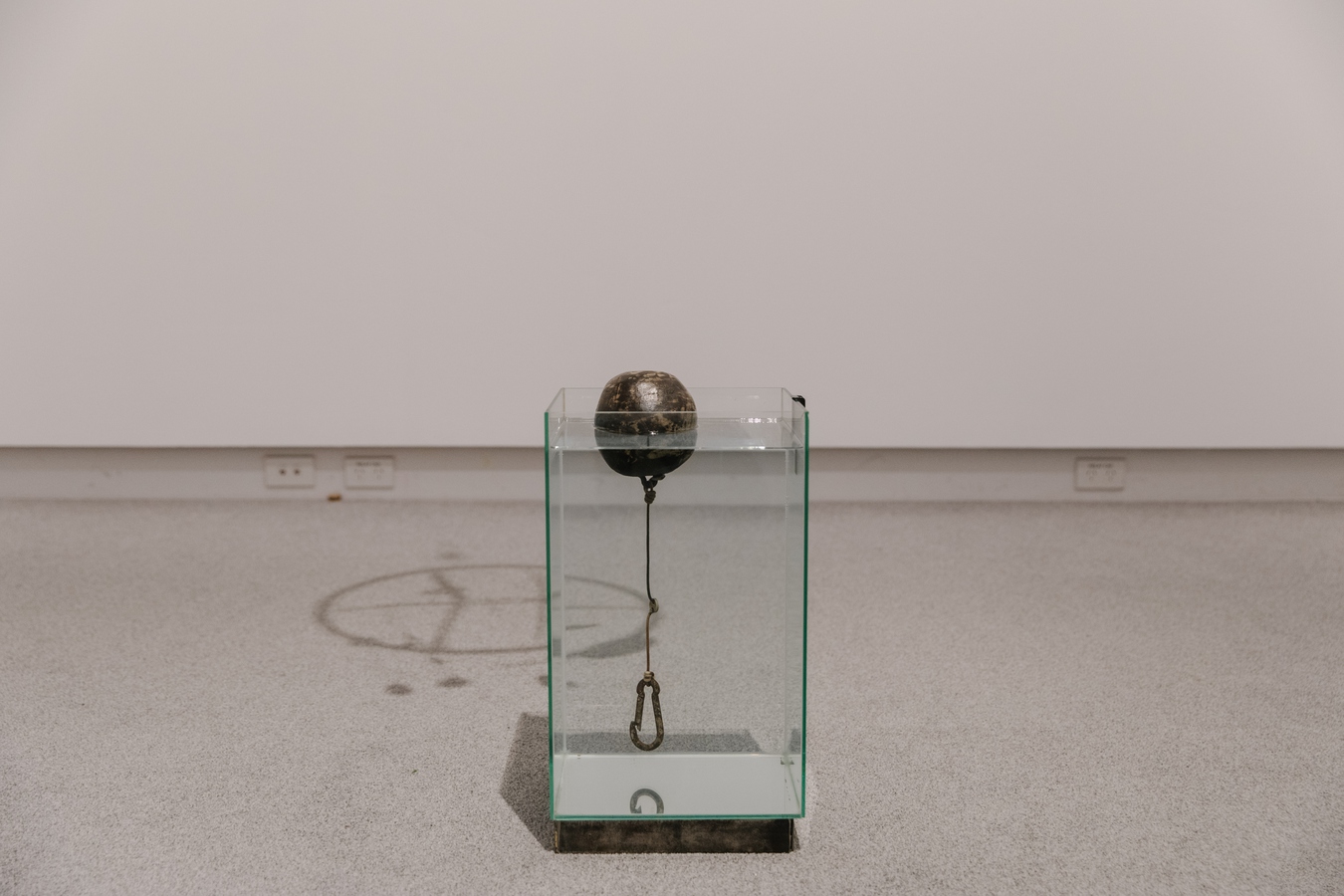 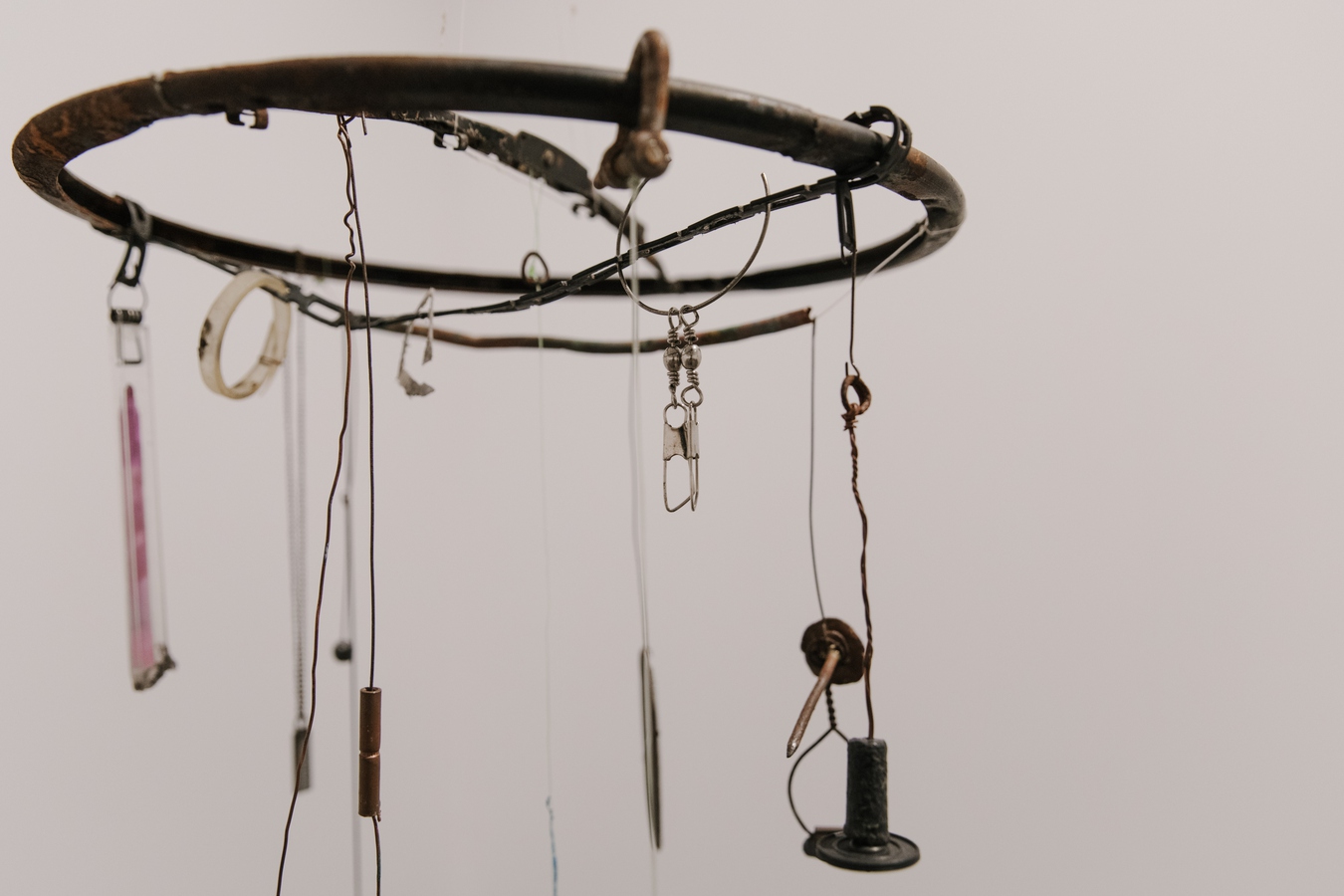 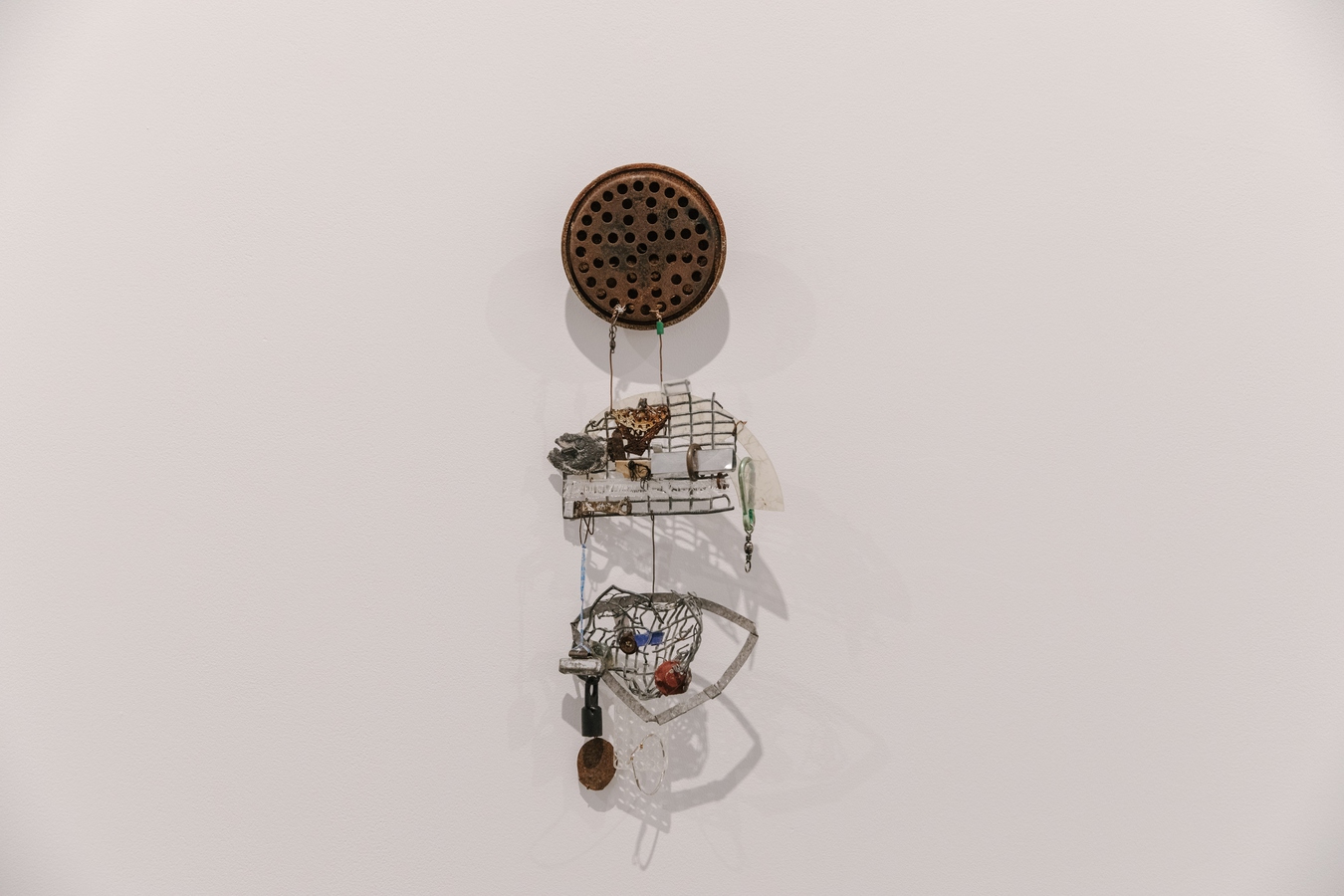 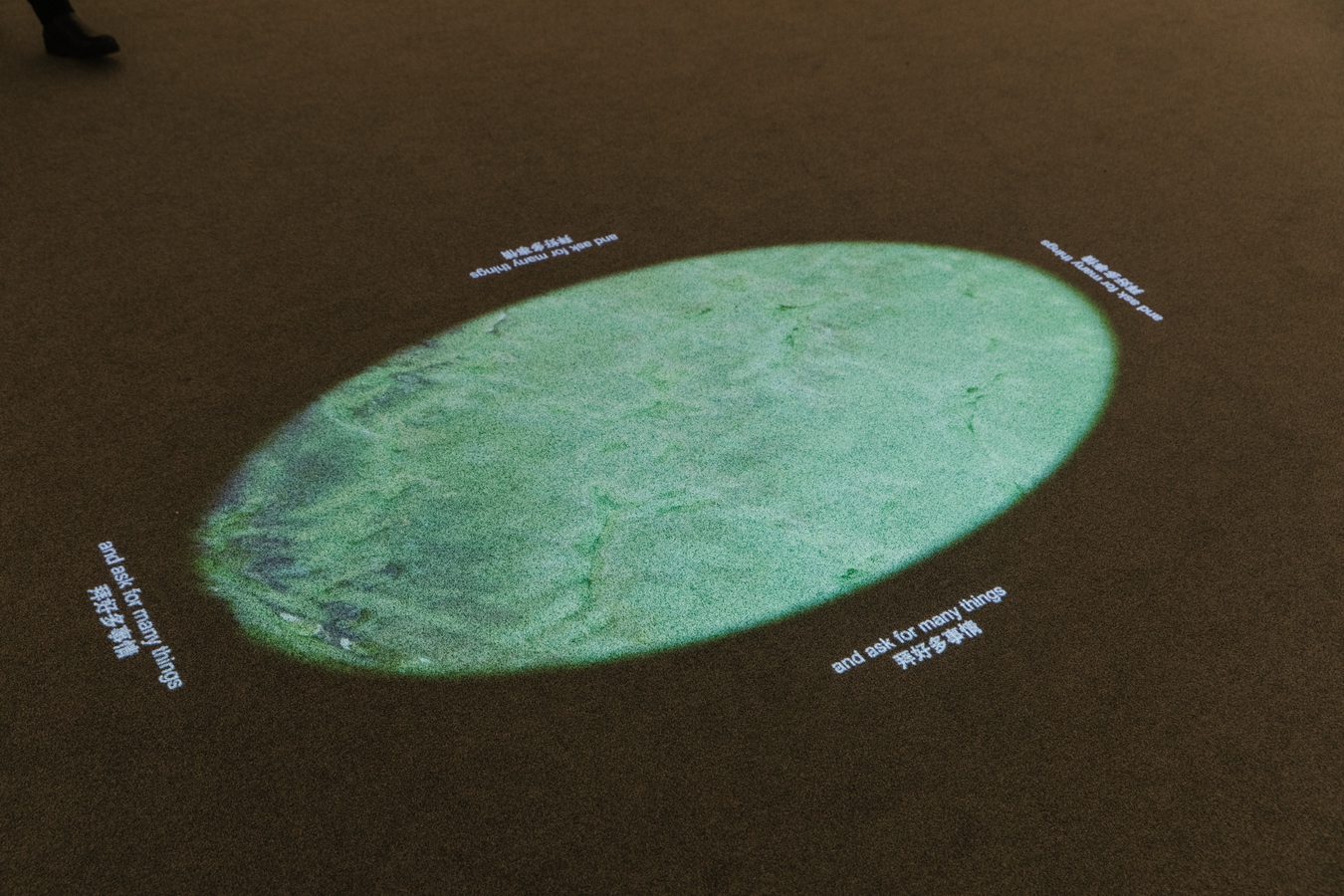 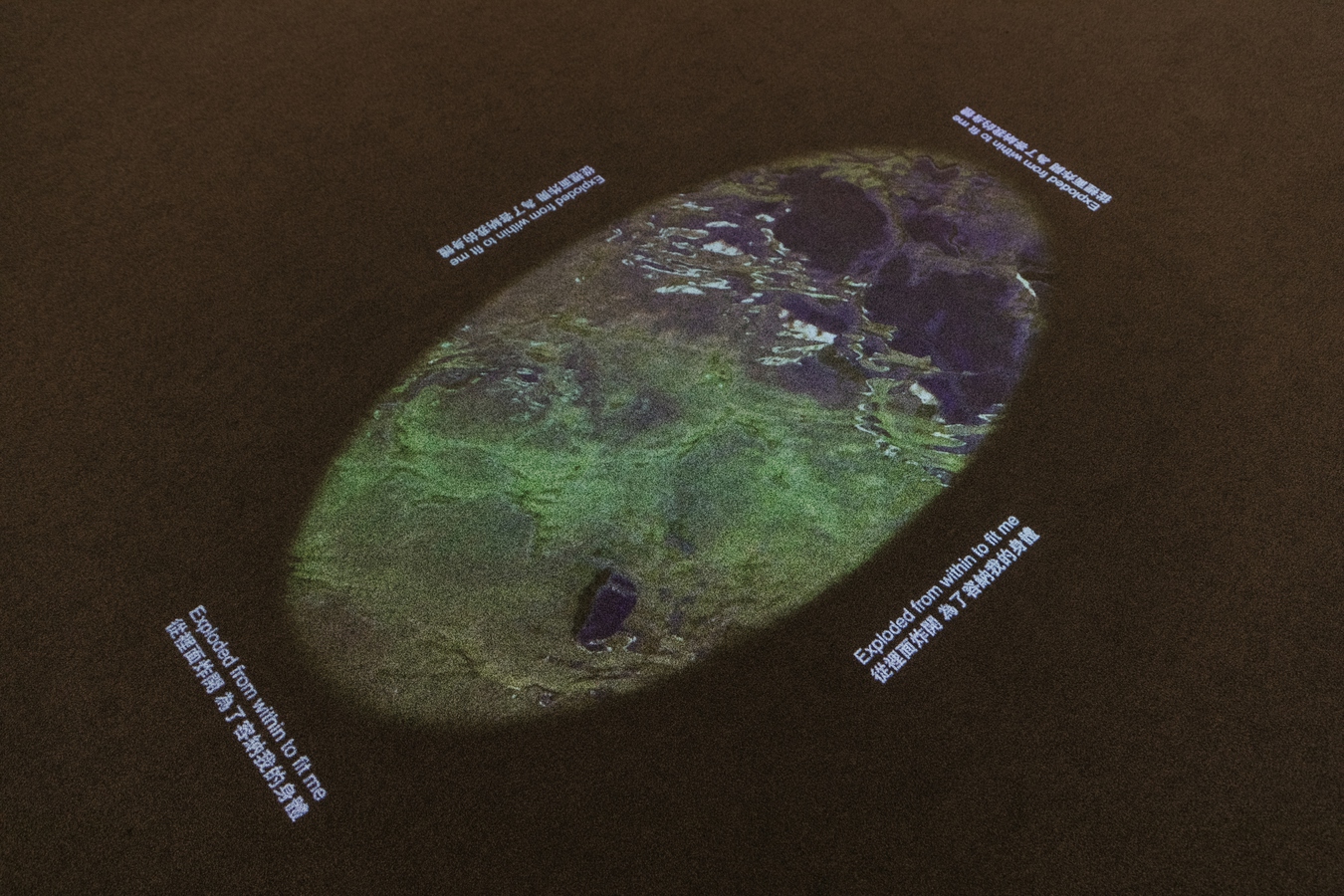 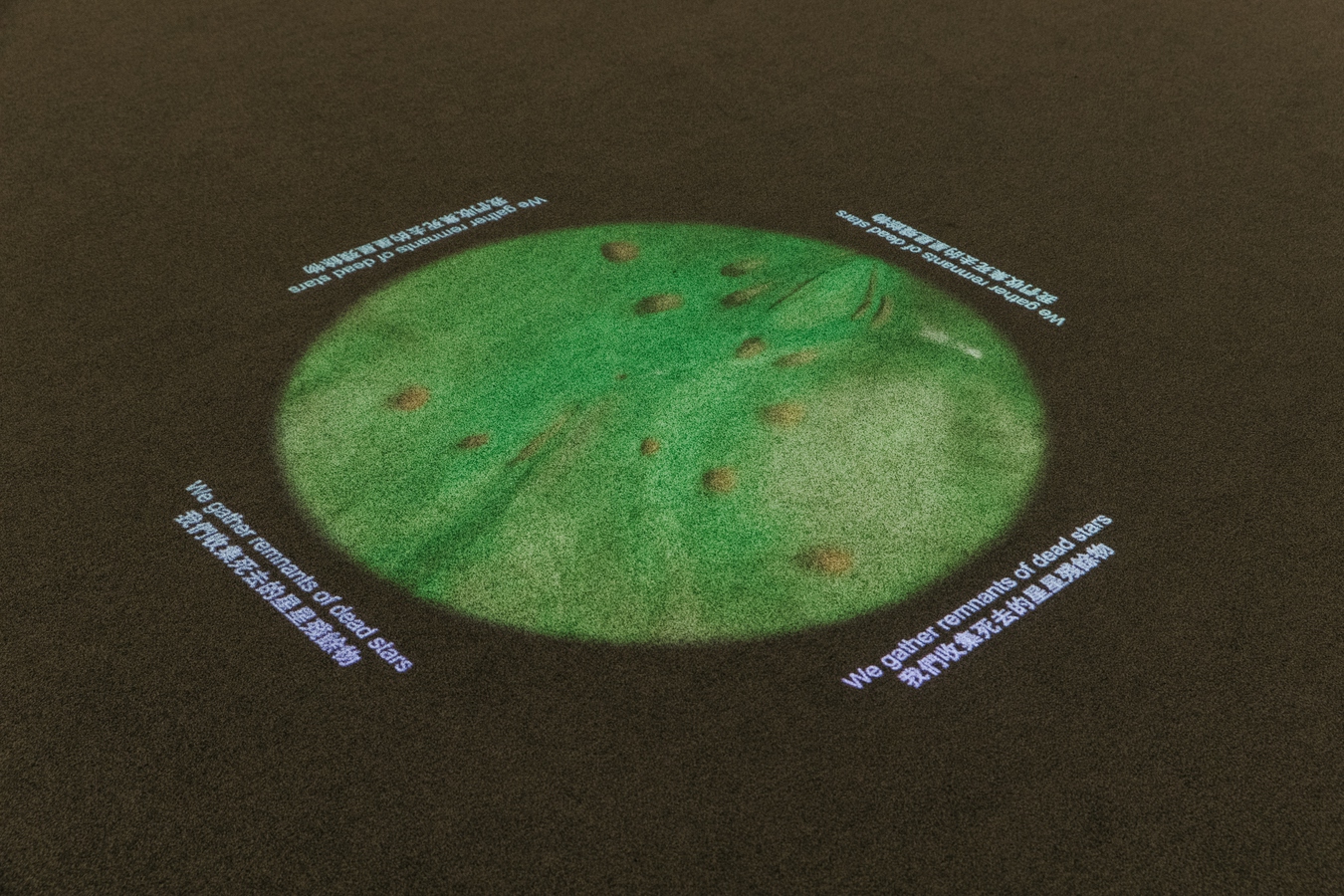 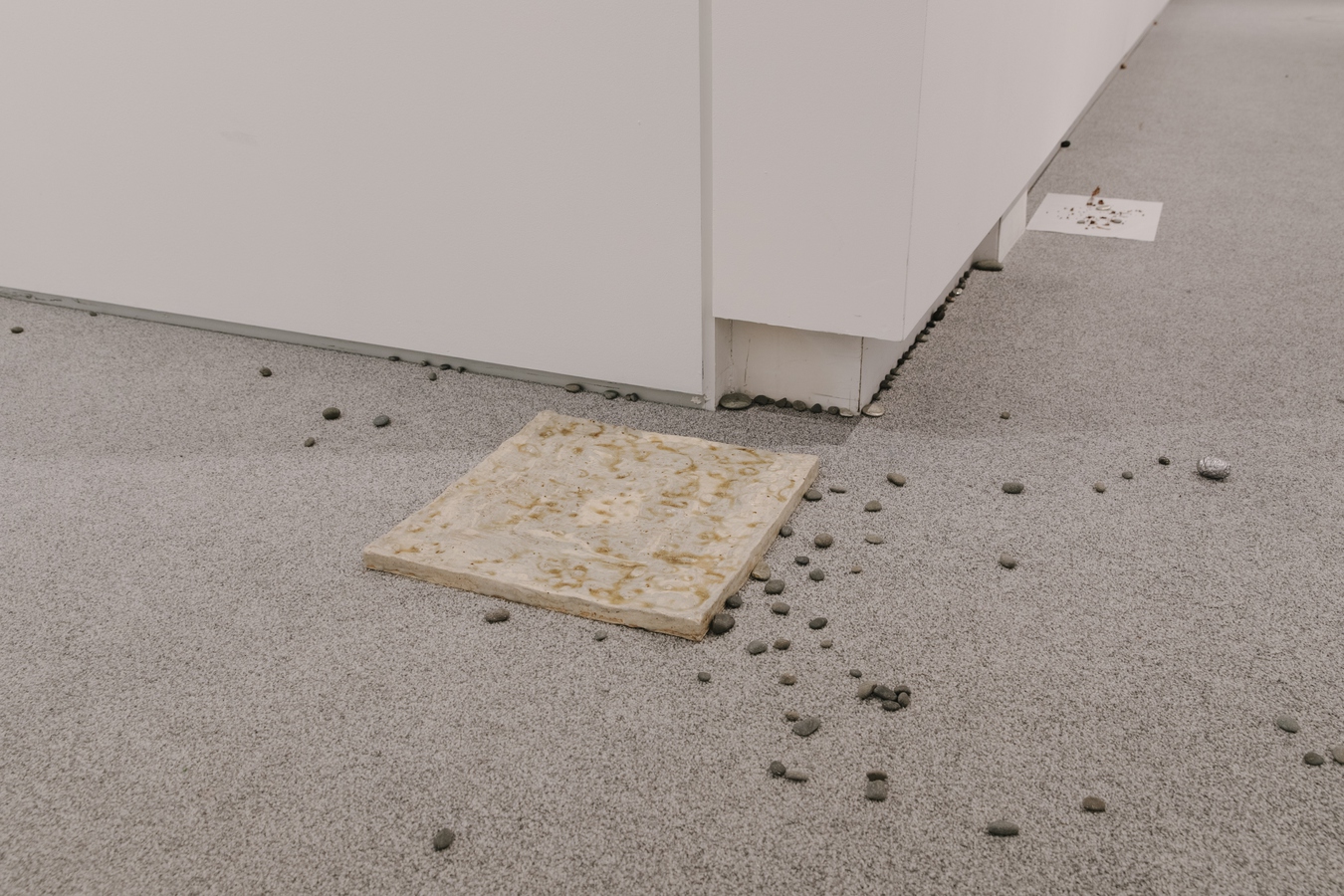 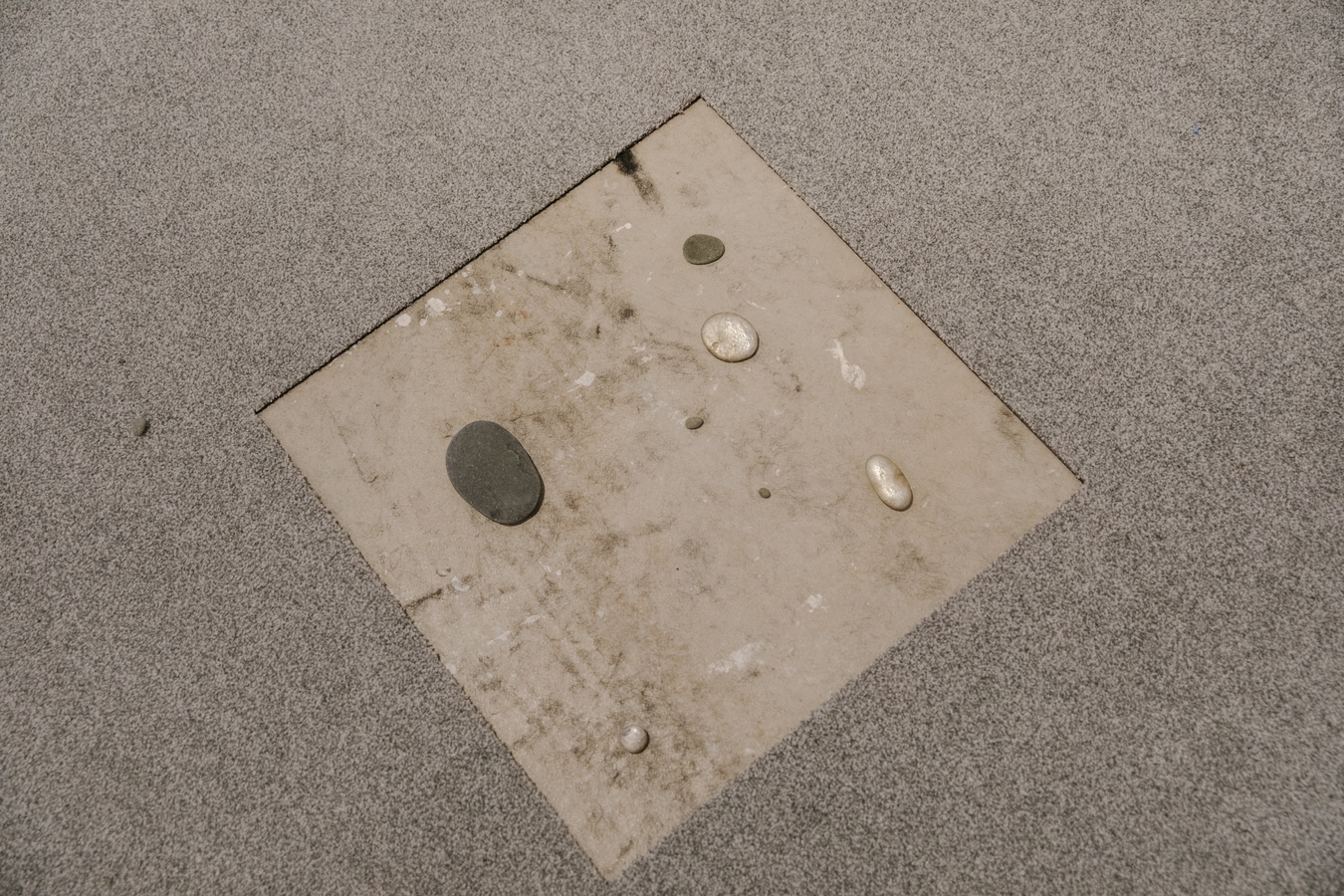 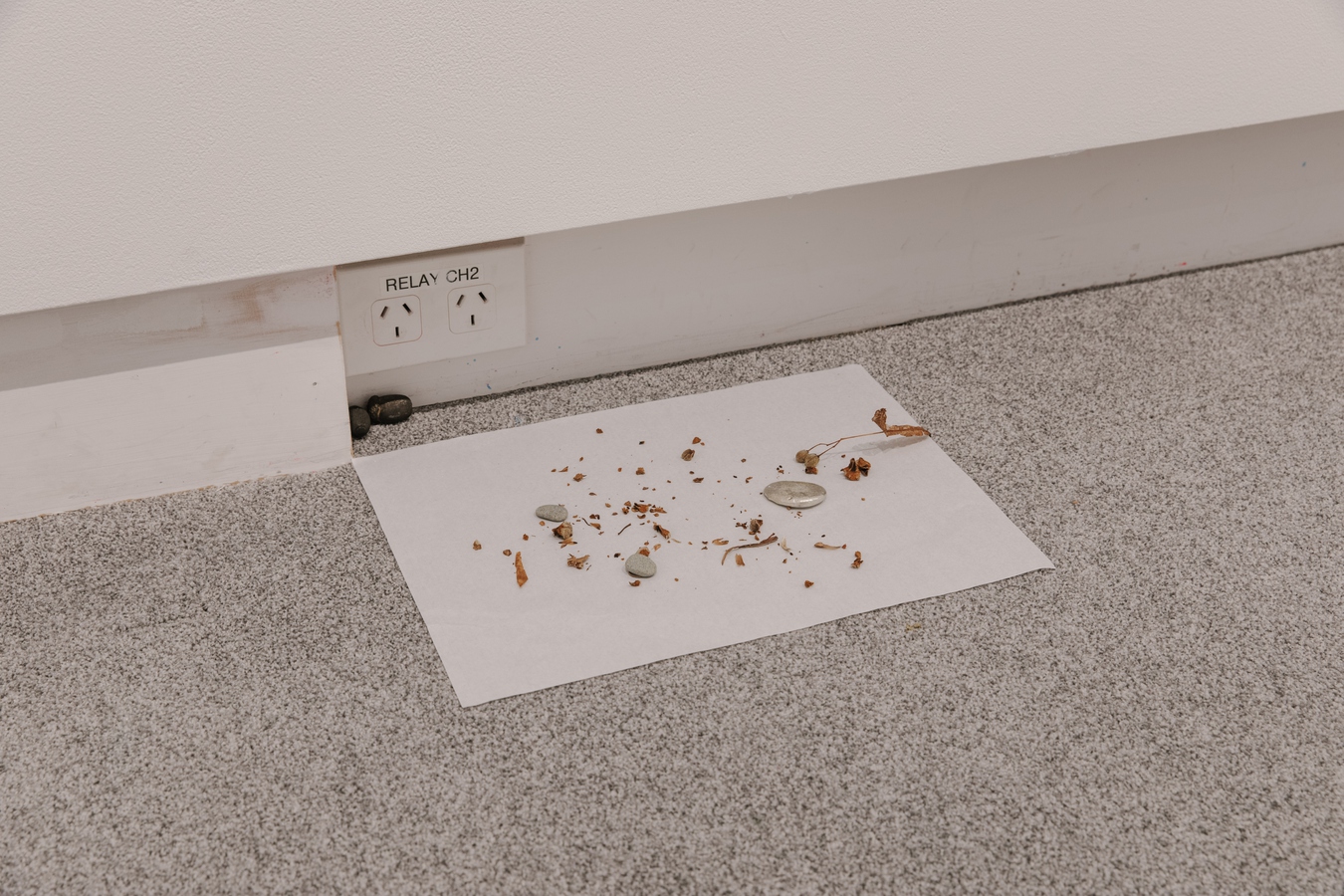 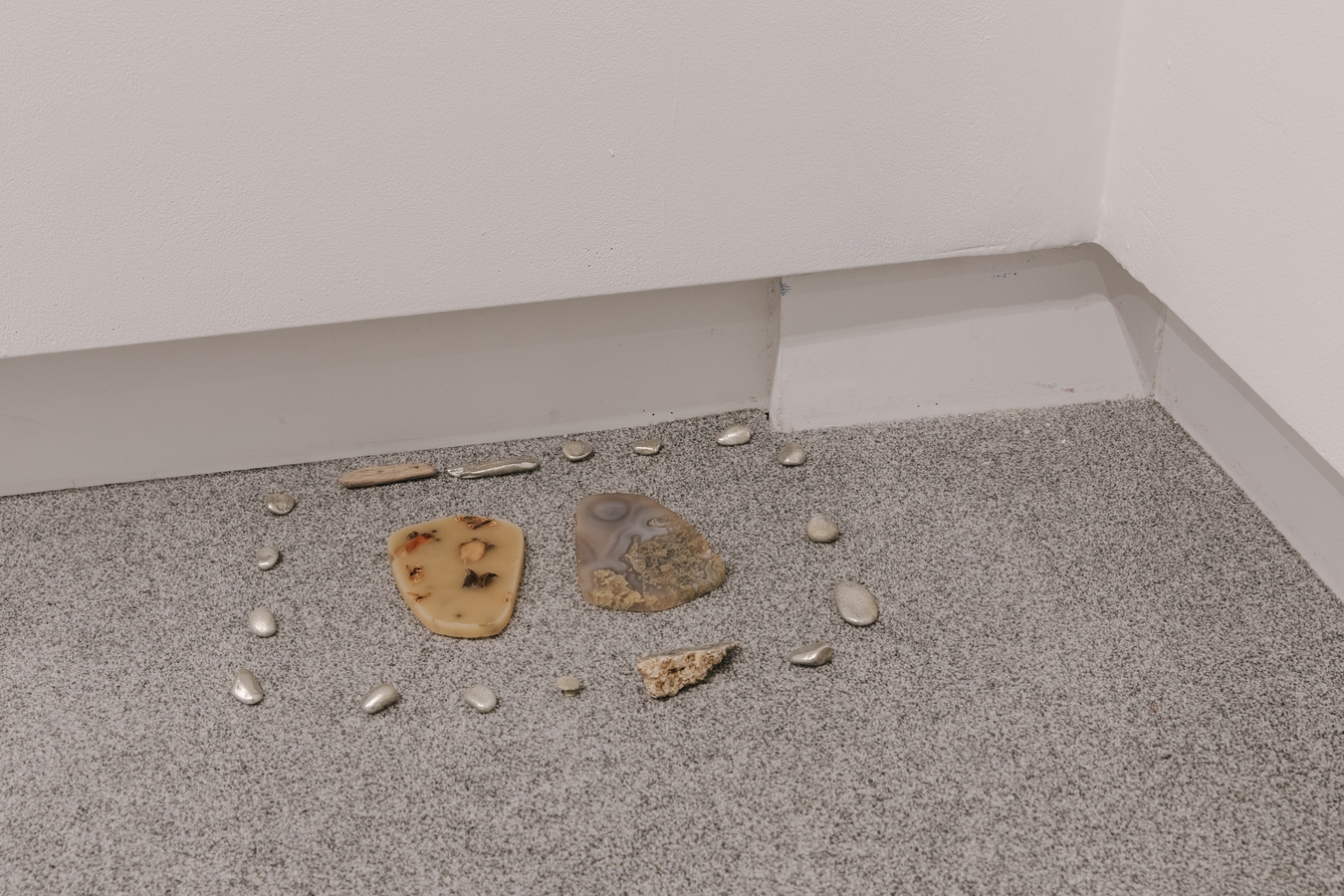 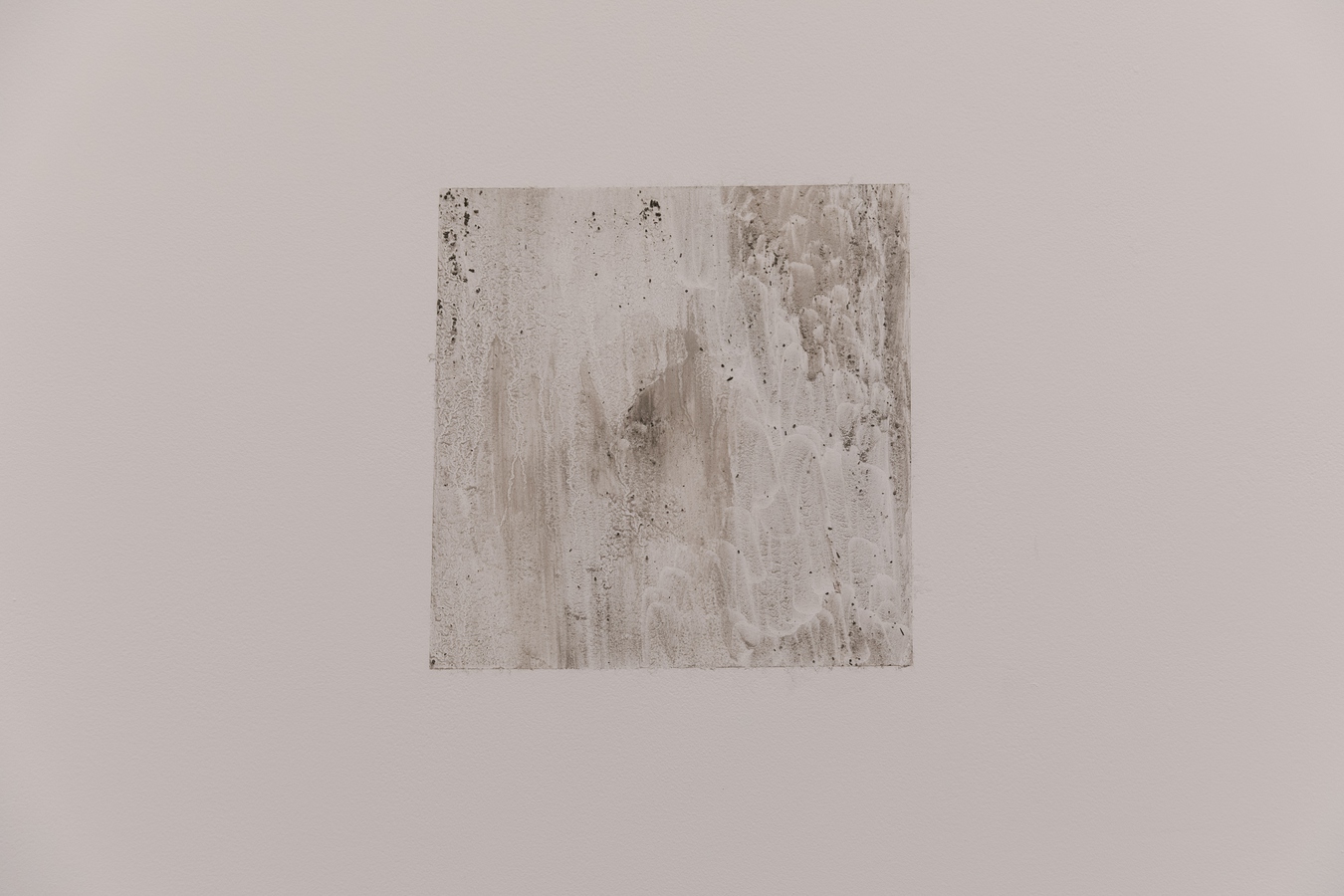 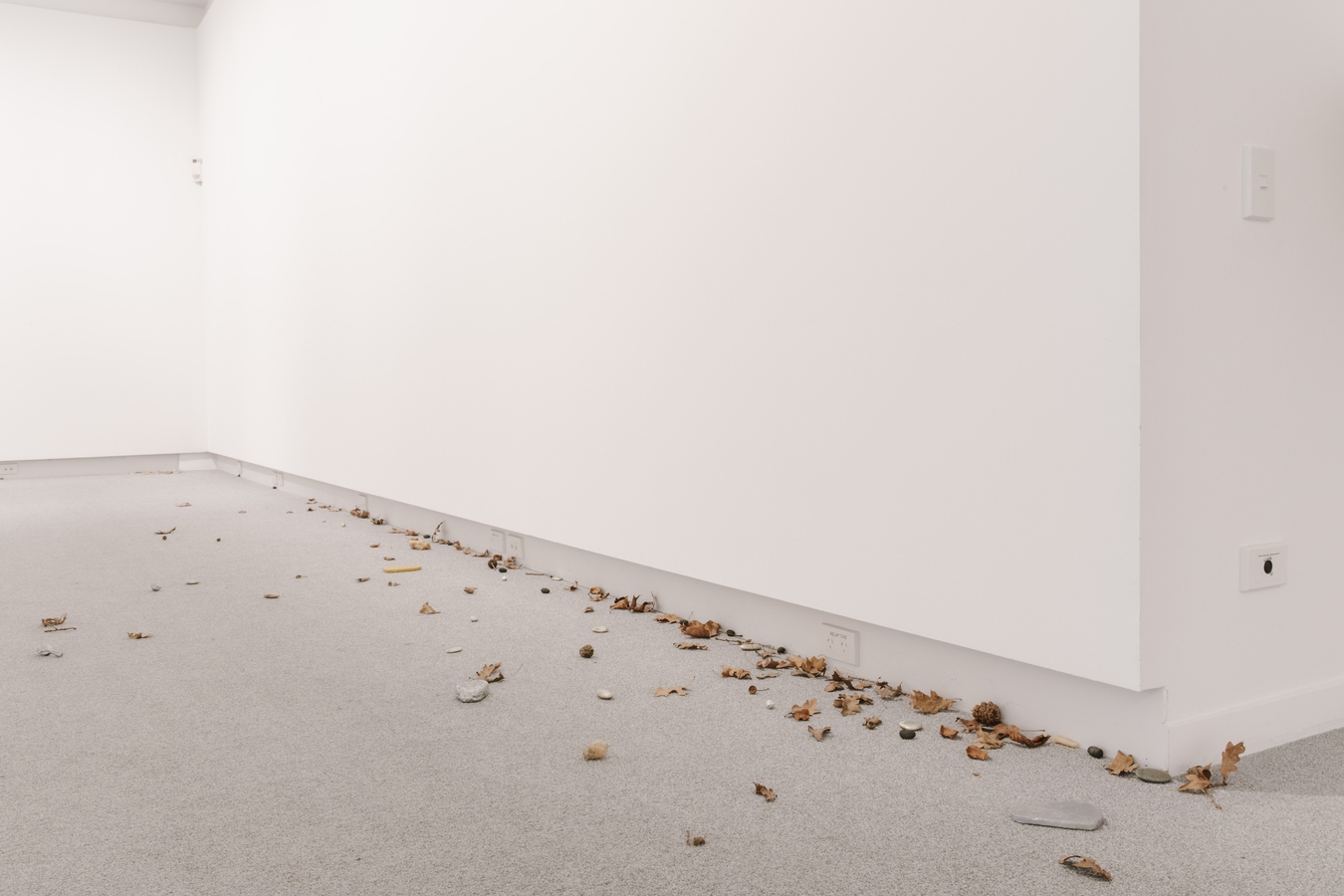 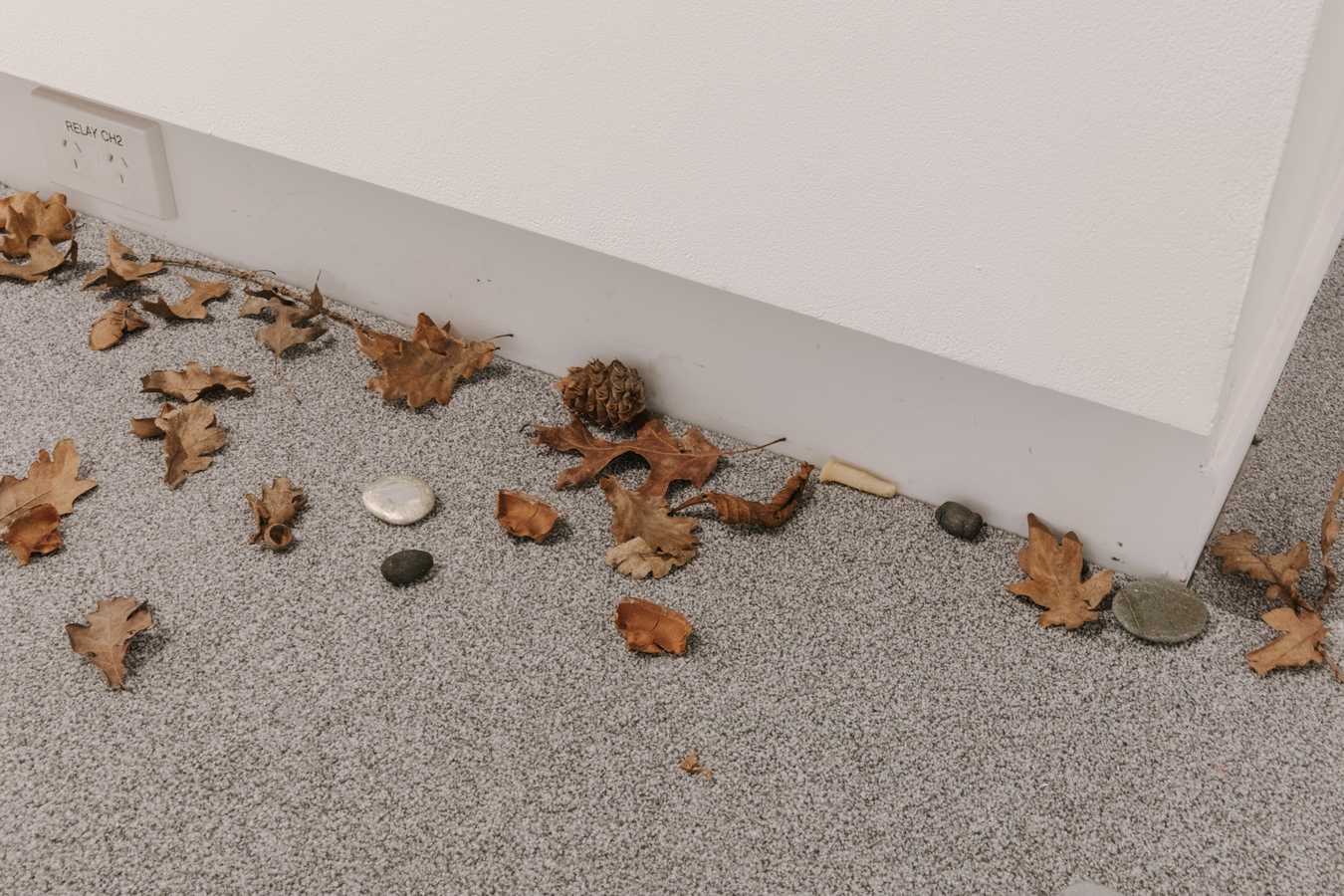 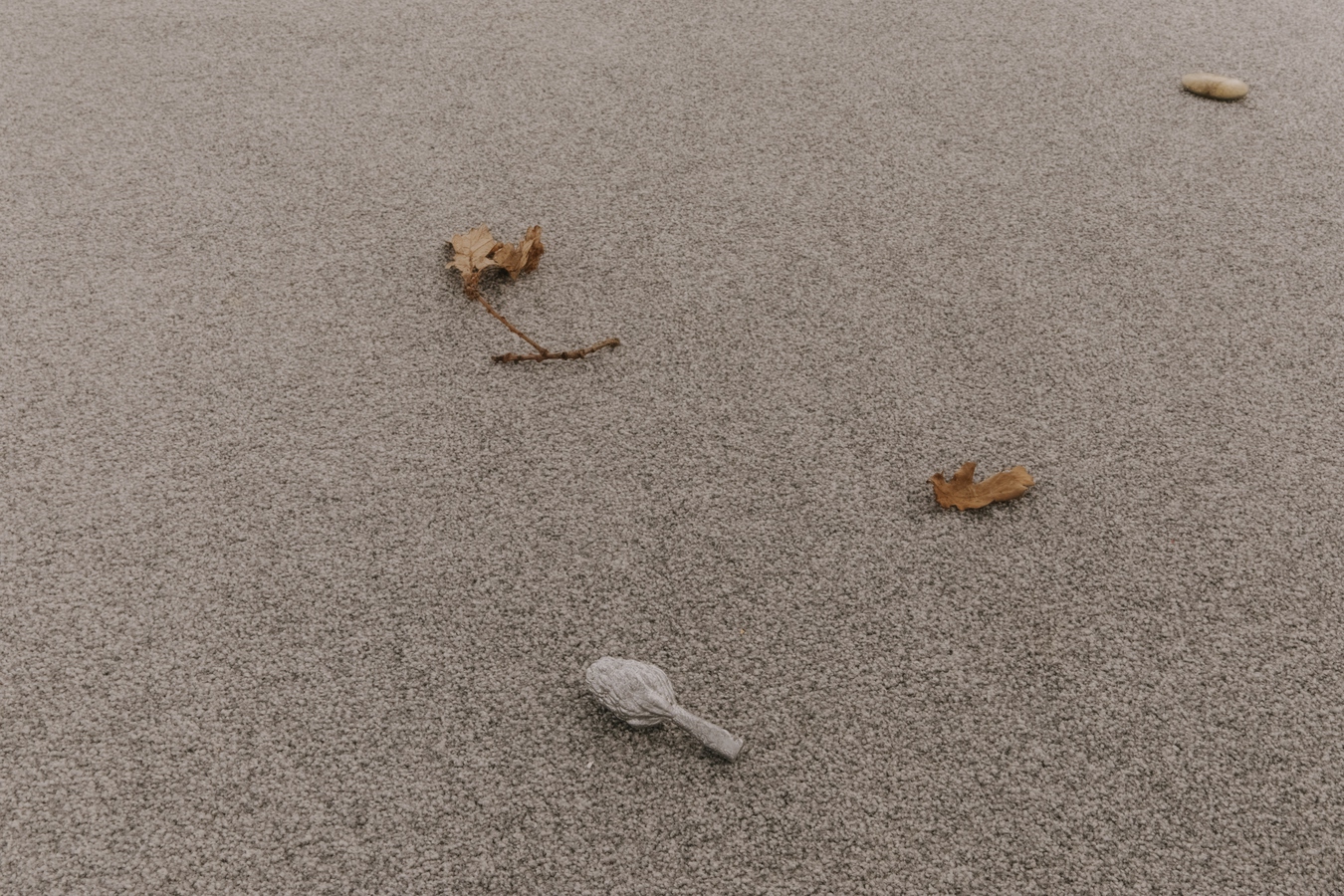 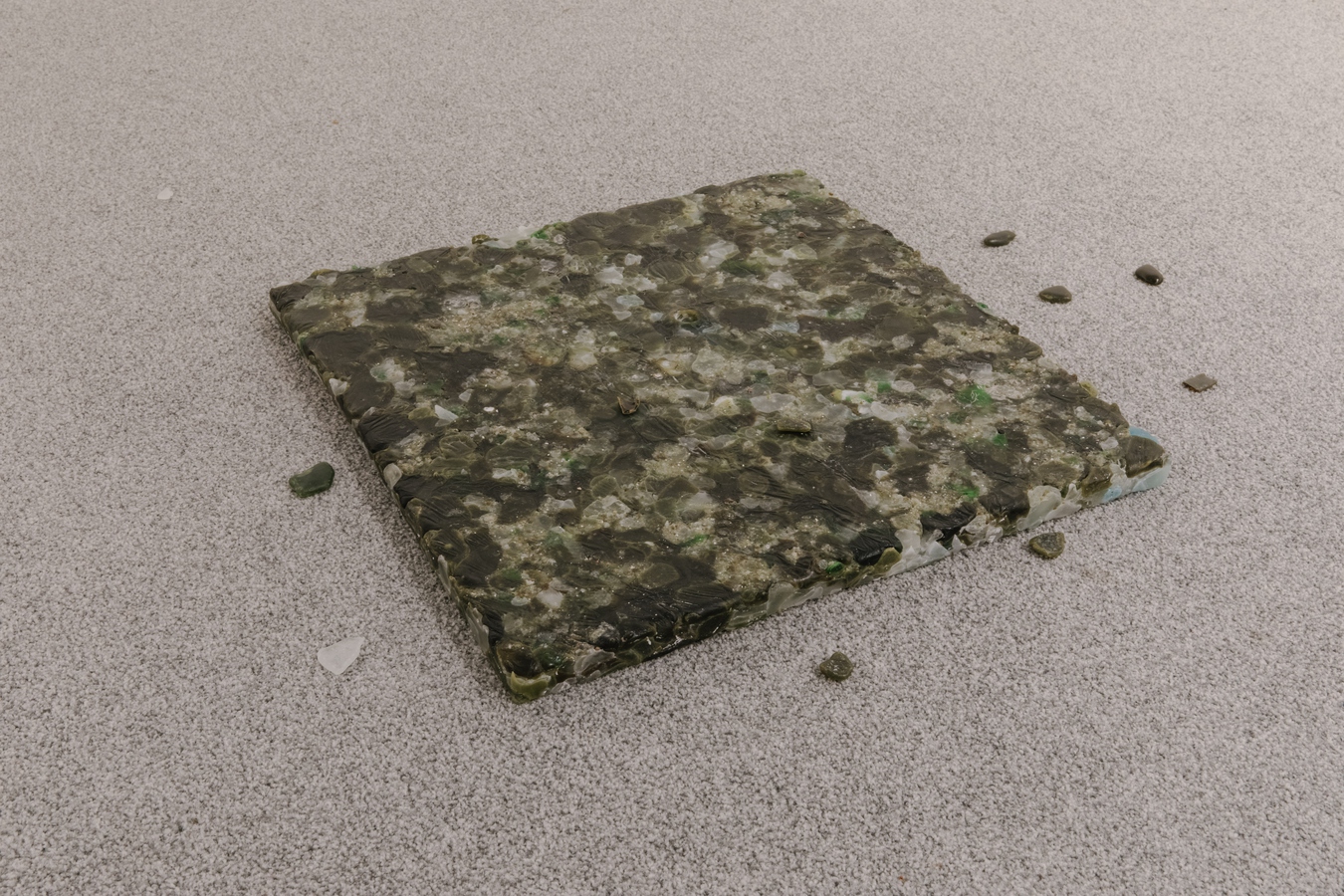 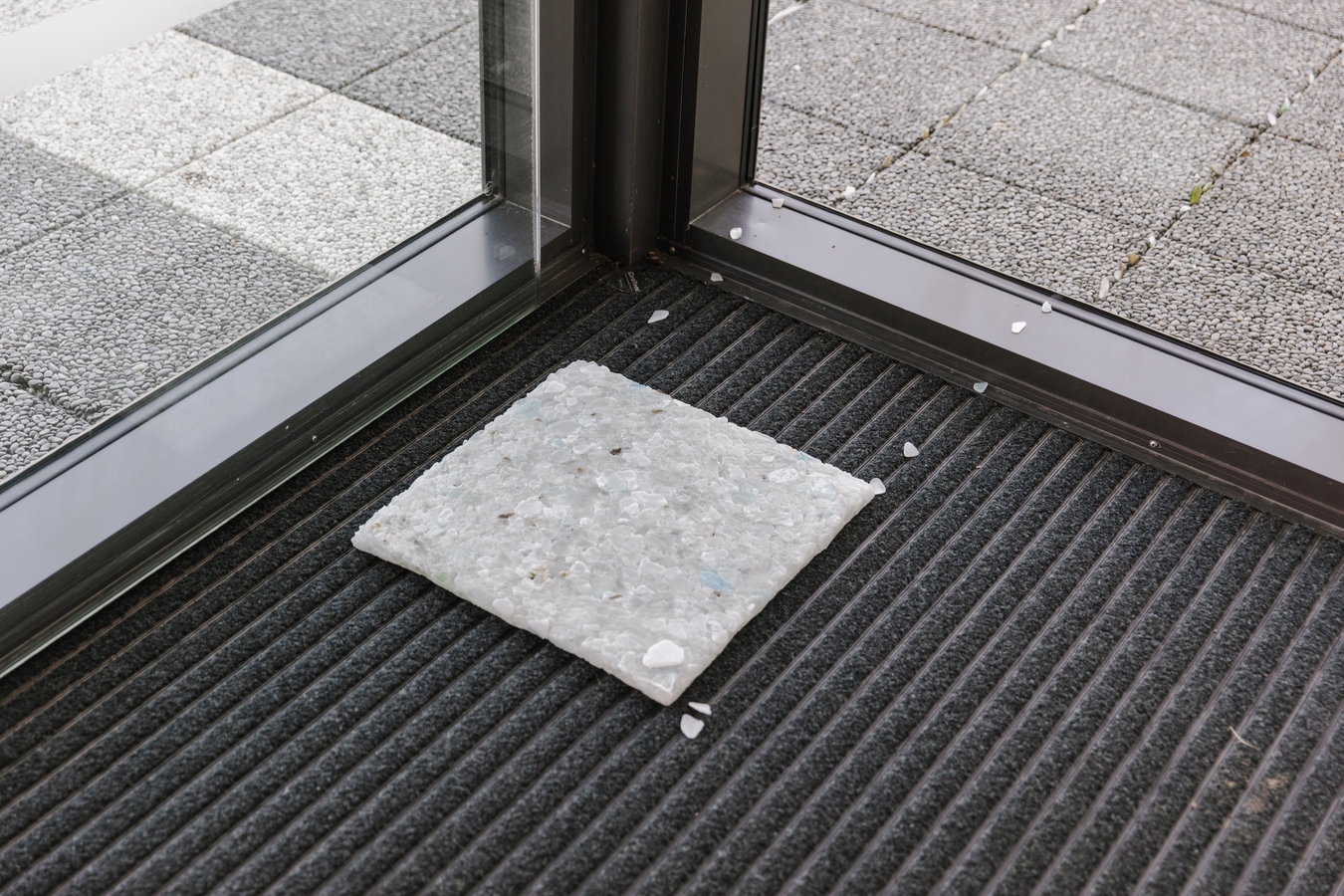 Looking down at the pavement when you walk is a common habit, or maybe you look at your phone? These surfaces—sheer backlit glass, or coarse irregular asphalt—have come to condition the way our bodies move through the world: feet on the ground, head in the internet. Both are so familiar that they are almost invisible. In this exhibition commonplace materials and surfaces are revisited with an intensity of focus: look closely enough and you realise that this is a moving planet we are walking on, alive with its own forces and interactions. This floor-based exhibition asks that we move with a different kind of awareness: attentive to both the everyday earthy matter that surrounds us, and to more feral, queer, or space-bound fantasies.

Works by Teresa Collins, Yukari Kaihori, Susu, and Sam Towse take a hyperlocal or extreme close-up perspective: each relies on found, industrially sourced and digital materials to make their work. For Teresa this means combing streets for discarded things that they collect and secure into the fishing-wire-suspended mobiles, Chewie and Keyrings ring, that hang low in the space. In another of her works, The water goes sideways, a ceramic ball is suspended in water, balanced with a lead sinker. It references both rural and domestic settings: a fishtank, a cattle trough, but is also a clear pool or cube of light.

Yukari’s work is also made with scavenged materials, which are then cast, transformed into new versions of themselves. A series of glass tiles in the gallery are made from recycled bottles from the Ashburton region; ceramic tiles are glazed with ash from a gallery worker’s home fireplace. Other things gathered from the area outside of the gallery—acorns, magnolia cones, sable fern leaves and agate stones—are cast in pewter, wax, and aluminium. Materially distant from their wet, now decomposing, organic origins, they become fossils within an accelerated process of change. Their presence in some ways troubles the sanitised gallery context: what constitutes ecological wellbeing in this deeply interior, windowless space; how does it relate to the outside world? Or a more pressing question within Yukari’s practice, informed by the idea of a ​​more-than-human world: what forms of liveness exist both within and outside of the building?

Sam’s concrete slabs, Loose stones, speckled skin, are composite sites. That is, they draw on real-pavement references from sites near to the artist’s home, but through the protracted and sometimes fickle processes of recording and reproduction, come to hold other forms of information or narrative. These works have stones embedded in and sitting on top of the poured concrete, like small-scale memorials to what the urban site inevitably suppresses beneath it, or perhaps crude human-made fossils. They are reminders that the surface of a city, or of a planet, is in no way seamless; rather, its ‘skin’ craters, ruptures, and flakes like any other ageing body.

Susu’s work, Remember to Dive 回溯潛水, also brings the body into focus through its interaction with other things in the world: My nails filled with oil from meat that the white bread didn't absorb / pores filled with smoke and pomelo juice. The projected video is moonlike in format, with subtitles encircling the image so there is no fixed point from which to read. The work draws on the vivid and non-linear associations one forms with things—mandarins, hands, rocks—and the way we recall through objects. Following the artist’s remembered experiences in relation to Tudigong (deity of soil and the ground), swimming training, and lunar holiday fireworks, it moves fluidly between physical and metaphysical states, between the ground, and the sky.

Visiting the space prior to making work, the artists in this exhibition each responded to the eerily moon-like quality of the gallery when it was empty. Part of the intention of this project was to amplify that sense of alien-ness or dislocation from what else is happening in the world that can come over you as you enter a hushed white space. At the same time, the thinking about the material transformations enacted within each of these works is ultimately inseparable from the large-scale ecological, political, geological and seasonal changes that continue outside. When you leave, it is hoped that these things are acutely present in your consciousness again, even for a moment, as you encounter the outside.

Each August the silveries, a rush of gleaming fish, come down the Hakatere River out to sea. 90 million years ago, volcanic eruptions in the area caused the formation of agates, chalcedony and quartz held in cavities within the local andesite rock. And over the past 2 million years, the advance and retreat of glaciers in the Hakatere Ashburton region have left behind vast slopes of shingle residue. The surrounding plains, on a base of silt, gravel and sand, incline slightly towards the sea too. Each of these movements leaves a material record, which is also a narrative: a riverbed, a pavement, an agate, the moon.

Teresa Collins is an artist and facilitator from Te Whanganui-a-Tara who has recently relocated to Luimneach, Ireland. Exhibitions and projects include Daylight Pipes at Corban Estate Arts Centre in conjunction with Satellite at The Keep, Tāmaki Makarau (2022). Highs and Lows, a Gold Sticker event held in residential Wellington (2021) and Bound in Secret Knots, at Enjoy Contemporary Art space, Wellington (2021). Teresa holds a BFA from Massey University Toi Rauwhārangi.

Yukari 海堀 Kaihori is currently based in Tāmaki Makaurau working on her Doctoral degree at Elam School of Fine Arts, The University of Auckland. Her work concerns ideas of the more-than-human-world and the immediacy of mundane places. Recent exhibitions include The Quiet Place I Search For: In situ (ɪn ˈsɪtju /室/ Shitsuしつ) at Meanwhile, Te Whanganui-a-Tara in 2022, In Searching for Deities at RM Gallery, and After Nature, Follow Where the Rain Goes at Elam School of Fine Arts, both in Tāmaki Makaurau 2021.

Sam Towse is an artist from Ōtautahi. She recently completed a BFA (hons) at the Ilam School of Fine Arts, University of Canterbury. Towse’s practice relates to the urban landscape, rearticulating lived environments through in-depth material investigations. She was the recipient of the Jane Rounick Memorial Award, the Seager Prize, and SELECT in 2021. Recent shows include Found Bearings (2021), Ilam Campus gallery and Bare Land (2020), Hot Lunch, both in Ōtautahi.

Susu 蘇子誠 is a Taiwanese artist based in Tāmaki Makaurau where they are currently in the honours year of a BFA at Elam School of Fine Arts, The University of Auckland. Susu works with 3D rendering, moving image, drawing and audio-visual installations. They are interested in ways that materials and language inhabit digital spaces, and the inevitable failure embodied in constructing narrative. Recent exhibitions include promising.space at Window Gallery (2021) and A Mass of Pub-a-Pub-a-lee, ProjectSpace (2019), both in Tāmaki Makaurau.

The moon and the pavement is a continuation of The Physics Room's itinerant programme collaborating with public galleries across Te Waipounamu. This is the second partnership exhibition between the Ashburton Art Gallery and The Physics Room.

The moon and the pavement Roomsheet (pdf)