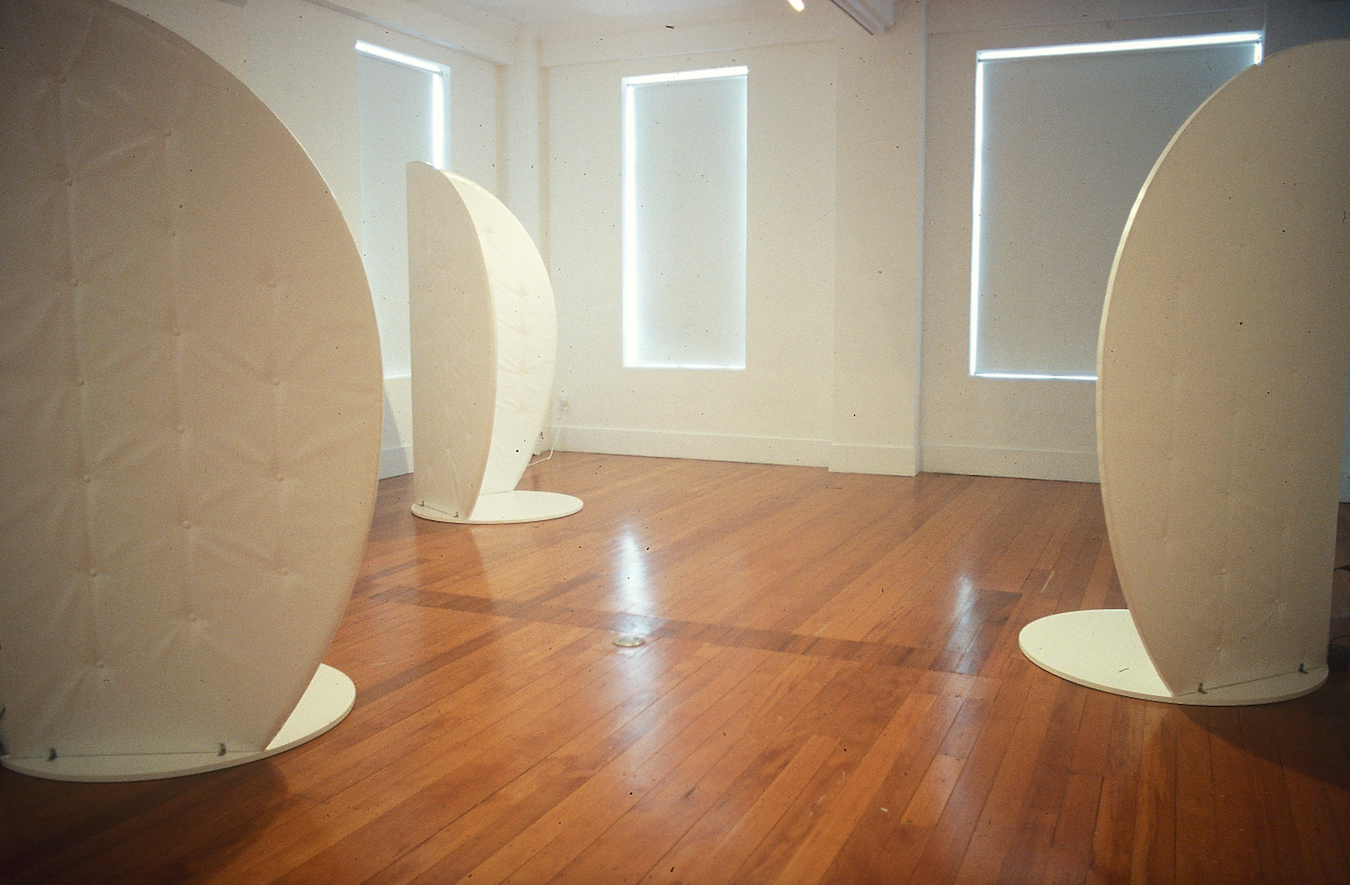 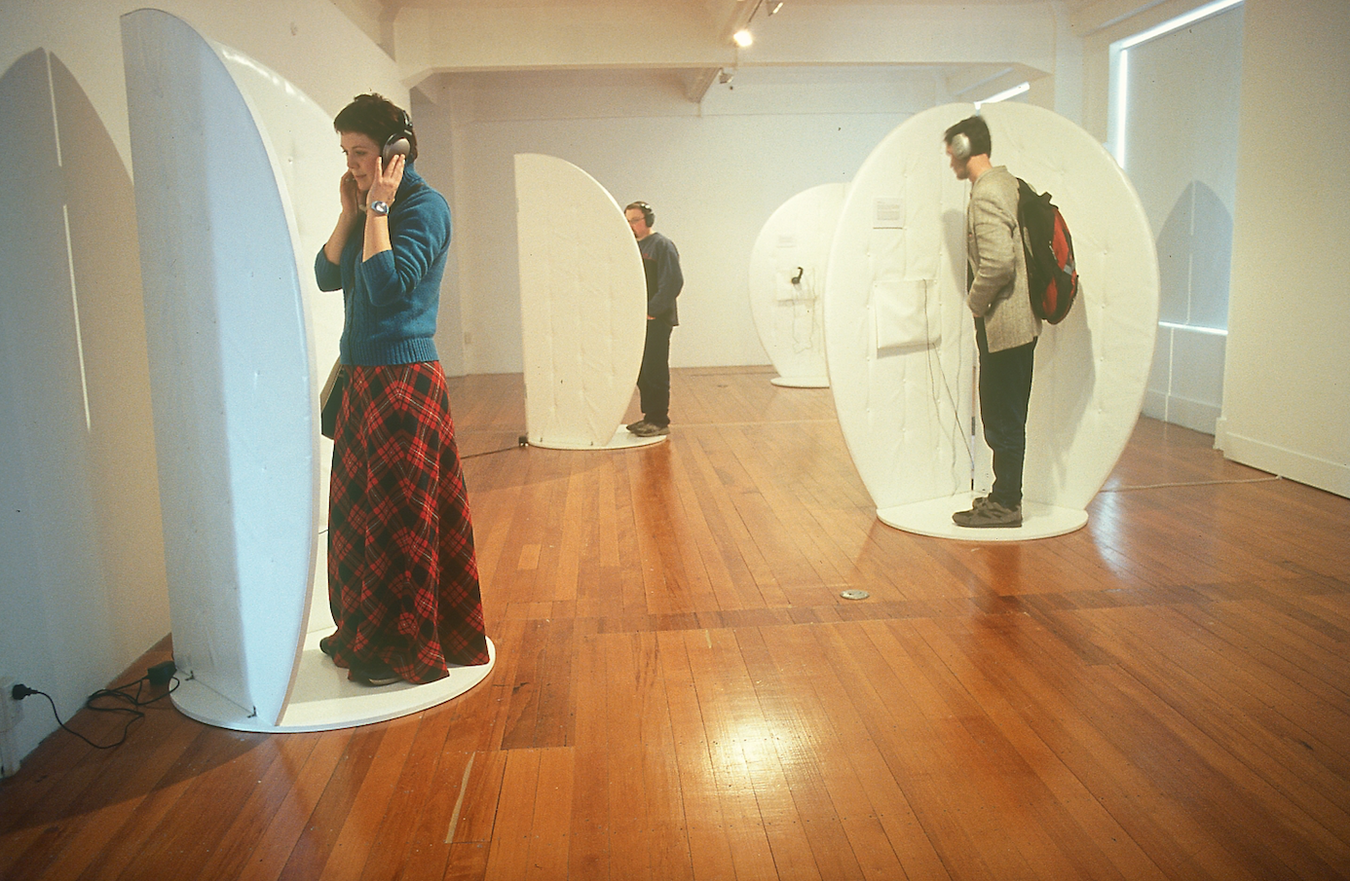 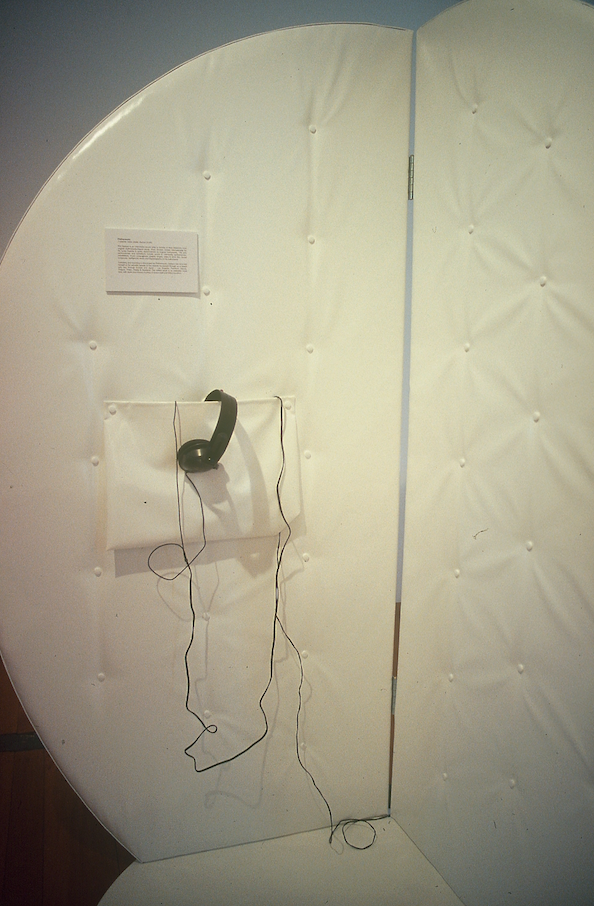 The Physics Room and National Radio’s ‘revolutions per minute’ show have joined with curator Sally McIntyre to bring six of New Zealand’s emerging and acclaimed audio artists into the physical space of the gallery and headspace of radio broadcast.

New audio works have been developed for the project by six artists:

Philharmonic / Richard Francis / John McCallum /
R a d i o q u a l i a / Rachel Shearer / Wendyhouse.

Each sound work is installed in the gallery space (with individual listening posts designed and manufactured by Valentin Tinc Design) and broadcast in a 3 week series of ‘revolutions per minute’ (National Radio, Sunday’s at 3pm) beginning on Sunday 17th August. A CD catalogue of the project is also available, featuring each of the six artworks and contextual essay by curator Sally McIntyre.

Phil Dadson is an intermedia-sound artist & founder of New Zealand's most original rhythm/performance group, From Scratch, known internationally for it’s funky rhythms & quirky performances on original instruments. His solo performances and exhibitions include sound & intermedia performances, installations, music compositions, graphic scores, video & short film, sound sculptures, radiophonic works and improvisations on his instruments. Exhibiting and recording in this project as Philharmonic, Dadson has recorded himself in the acoustic spaces of the airports he passed through on a recent solo tour through Europe and Japan - Los Angeles, Frankfurt, Vienna, Prague, Tokyo, Osaka & Auckland. The edited result is an extended vocal solo, with duets and chorus courtesy of airport staff and fellow travellers.

Richard Francis has been involved with experimental music since 1996 when he began his first solo excursions (combining tape looped instrumentation with field recordings) and played in a guitar improvisation group called Small Blue Torch. Since then he has developed his audio work using manipulation techniques with a concentration on electroacoustic and concrete collection and manipulation of field audio material. Using contact and stereo microphones, Francis gathers field audio material, and using the subtle elements of these recordings (quiet electrical hums and crackle, amplified ambient near silences, minute occurrences) carefully abstracts and arranges them into texturally detailed, engaging compositions.

John McCallum is a Lyttleton based audio artist who is also a member of the collaborative group Audiovandals. His contribution to Audible New Frontiers is ‘Tony’s Tapes’, a piece bringing together McCallum’s own field recordings and synthetic concoctions, with extracts from a collection of family tapes passed down to the artist from his late father-in-law, Anthony Thorpe. The tapes used in this work provide a sound document of one man’s family, spriritual and musical interests through the 1960s and ’70s. After emigrating from the UK, Anthony like many others at that time, exchanged tapes through the post with his family. ‘Tony’s Tapes’ is an experiment by McCallum to fit two contrasting tastes and soundworlds together.

Rachel Shearer makes music under the moniker of Lovely Midget and also works as a sound editor/designer in post-production audio as Lovely Sound or Rachel Shearer. In creating her own music, Shearer pursues texture, stripping back sounds to their ‘musical chassis’ then reconstructing or reassembling to different ends. As an editor/designer Shearer strives to complement visuals with ‘real’ (at times surreal) aural environments. Poltergeist, her piece for this project, is a combination of the two practices. Music meets short film with no pictures. Poltergeist creates an environment to be in - an exaggerated atmosphere or supernatural improvisation.

Wendyhouse core members Daniel Powell (based in London) and Bryce Galloway (Wellington) have collaborated across Northern and Southern Hemispheres respectively to create a piece for your ears on either side of your orb-like head. The pair worked in geographical isolation, responding only to the predetermined title ‘Skull and Crossphones’ and a running time of 15 minutes. The results have been mixed into the left and right channels of a stereo master without any post-production tampering. Thus the result is pure chance collision of individual responses. The piece continues Wendyhouse experimentation in the area of postal (that's "snail mail") recording that employs chance as a major compositional device. Listeners to this track are invited to create their own mix and explore the qualities of the separate channels by adjusting the balance control on their stereo.