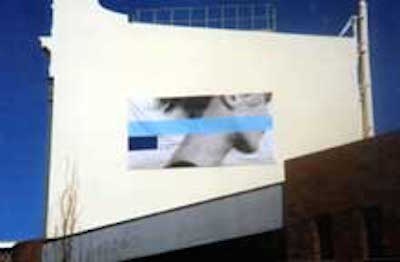 A major public art project for the Physics Room in 2000, this temporary billboard was erected on the High Street side of the Physics Room building. The billboard was produced by Crown Lynn New Zealand - a collaborative team of artists and designers - in this instance including Rudolf Boelee, Maria Langley and Brian Shields.

The former trademark of Crown Lynn Potteries Limited was acquired by the artists in 1994, and has been used to present several projects since then, including the Ambiguous Image series. Once known as the crowning glory of the ceramic industry in New Zealand, in the postwar period Crown Lynn offered a stylish range with a touch of elegance and modern perfection.

The Ambiguous Image billboard uses a still from a 1960s new wave film - a visual style which has been an influence throughout much of Rudolf Boelee’s artistic career. The filmic element is blown up to cinematic proportions in the billboard, the dimensions and scale similar to that of a movie screen. But the image presented is a grainy close-up, distorting the image and rendering the billboard familiar yet indistinct.

Although the image has been sourced from film, the style and the format of the billboard are equally suggestive of the visual language of advertising. Aping the methods of advertising, Boelee and Crown Lynn presented a visual statement for Christchurch without any commercial message. The text provides the only suggestion of narrative, evocative of a general malaise observed by the artist as an immigrant to New Zealand, that living here is regarded by many as an unsatisfying step towards some greater goal or a better place.

Following on from this project, Crown Lynn produced The Ambiguous Image - figures in a mental landscape, a publication featuring 12 virtual billboards for Christchurch. And with a Physics Room exhibition in 2003, Boelee presents the third part of The Ambiguous Image - her dissatisfaction_, reworking the billboard and expanding the debate around living in Christchurch as an artist.