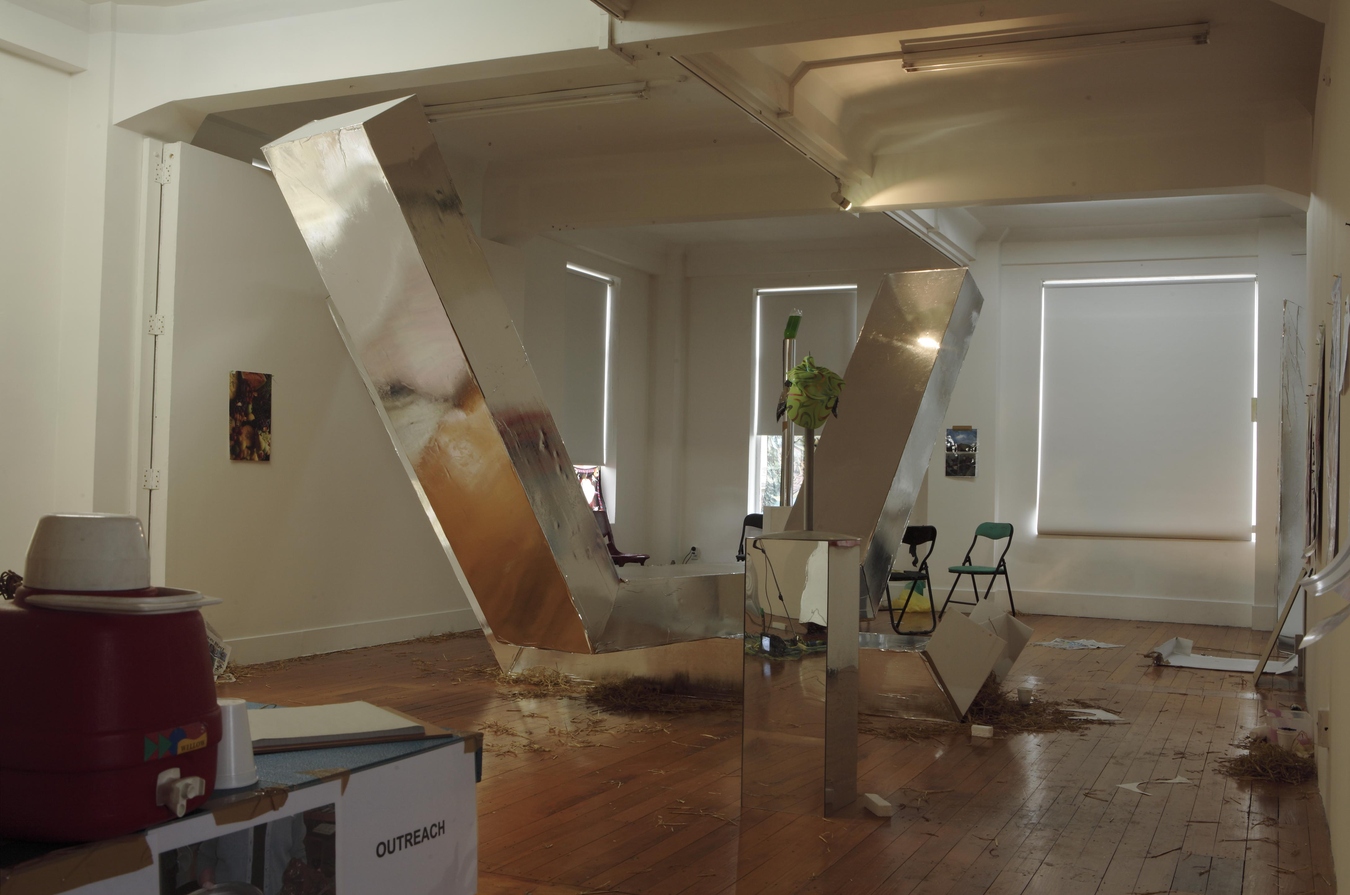 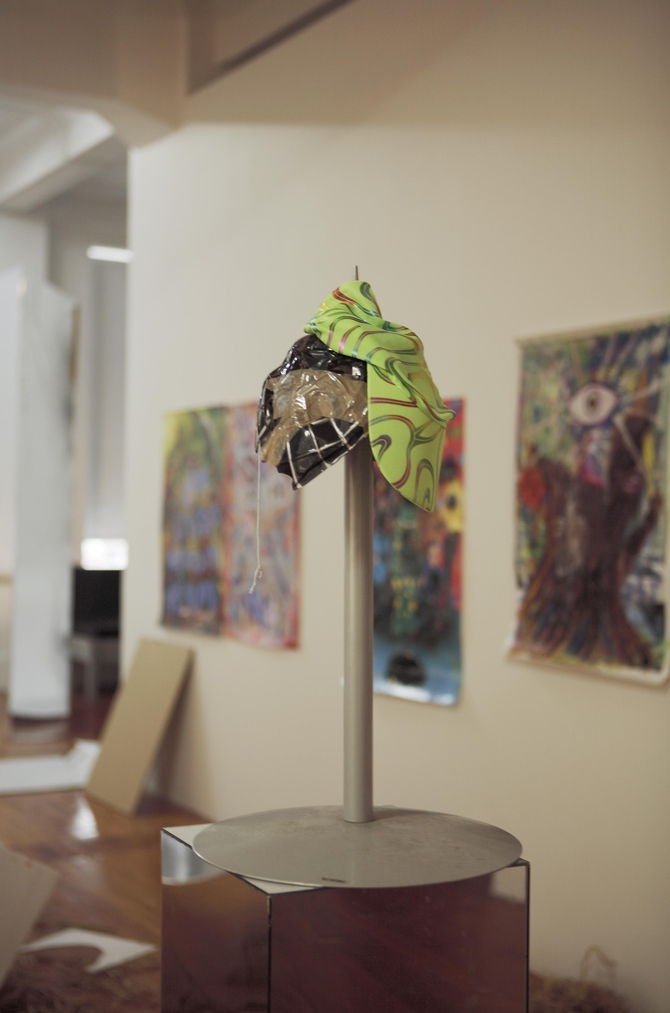 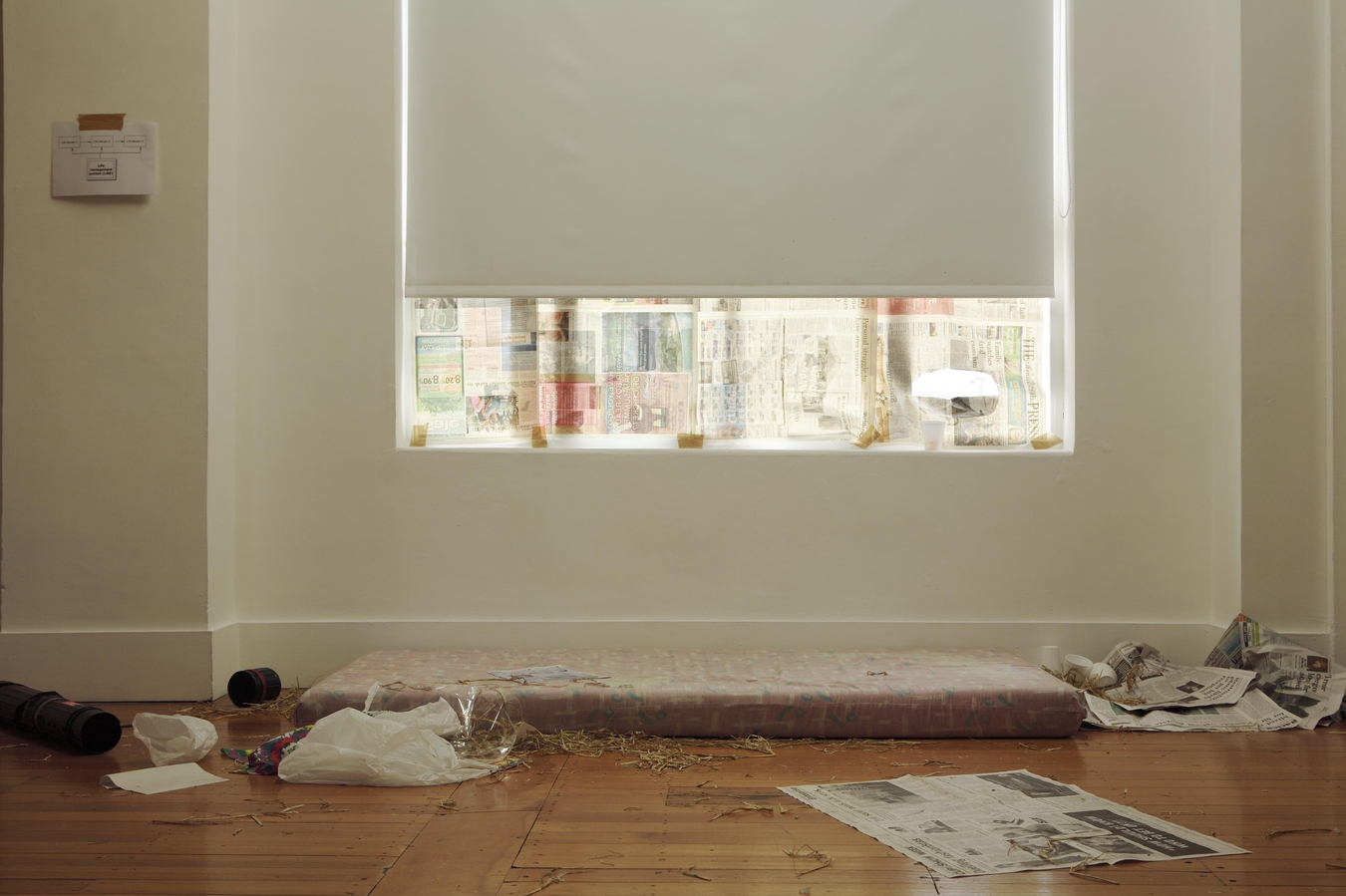 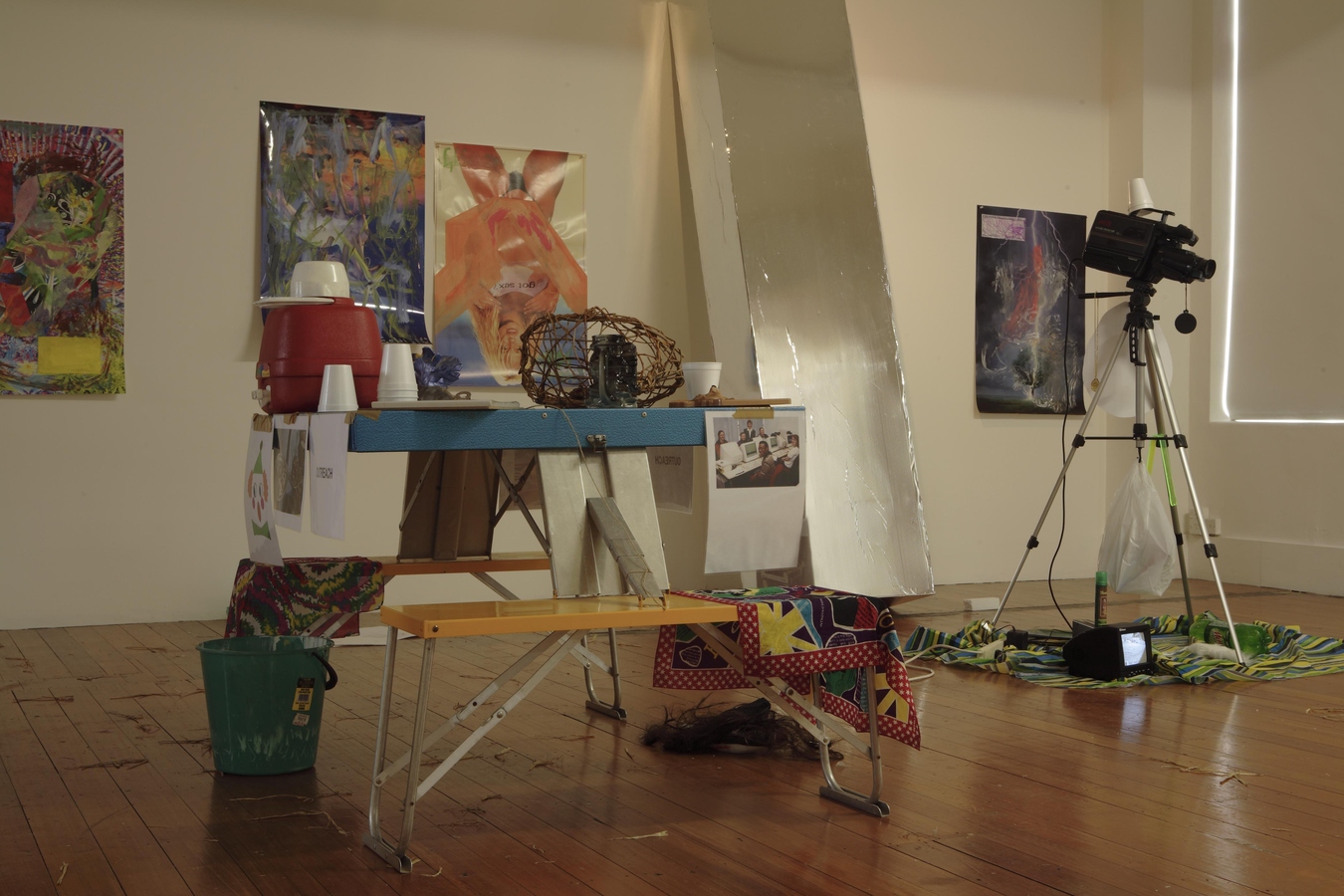 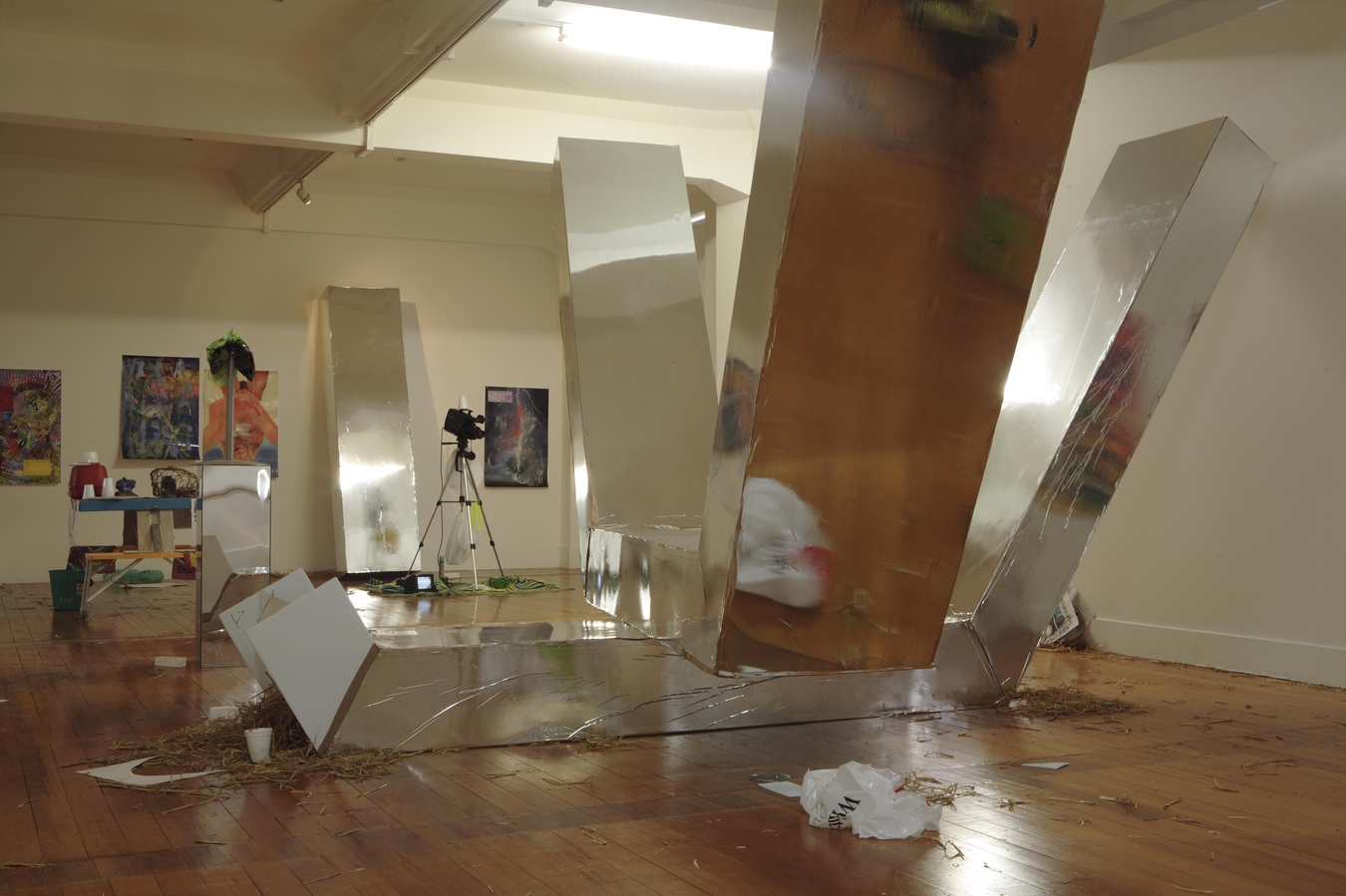 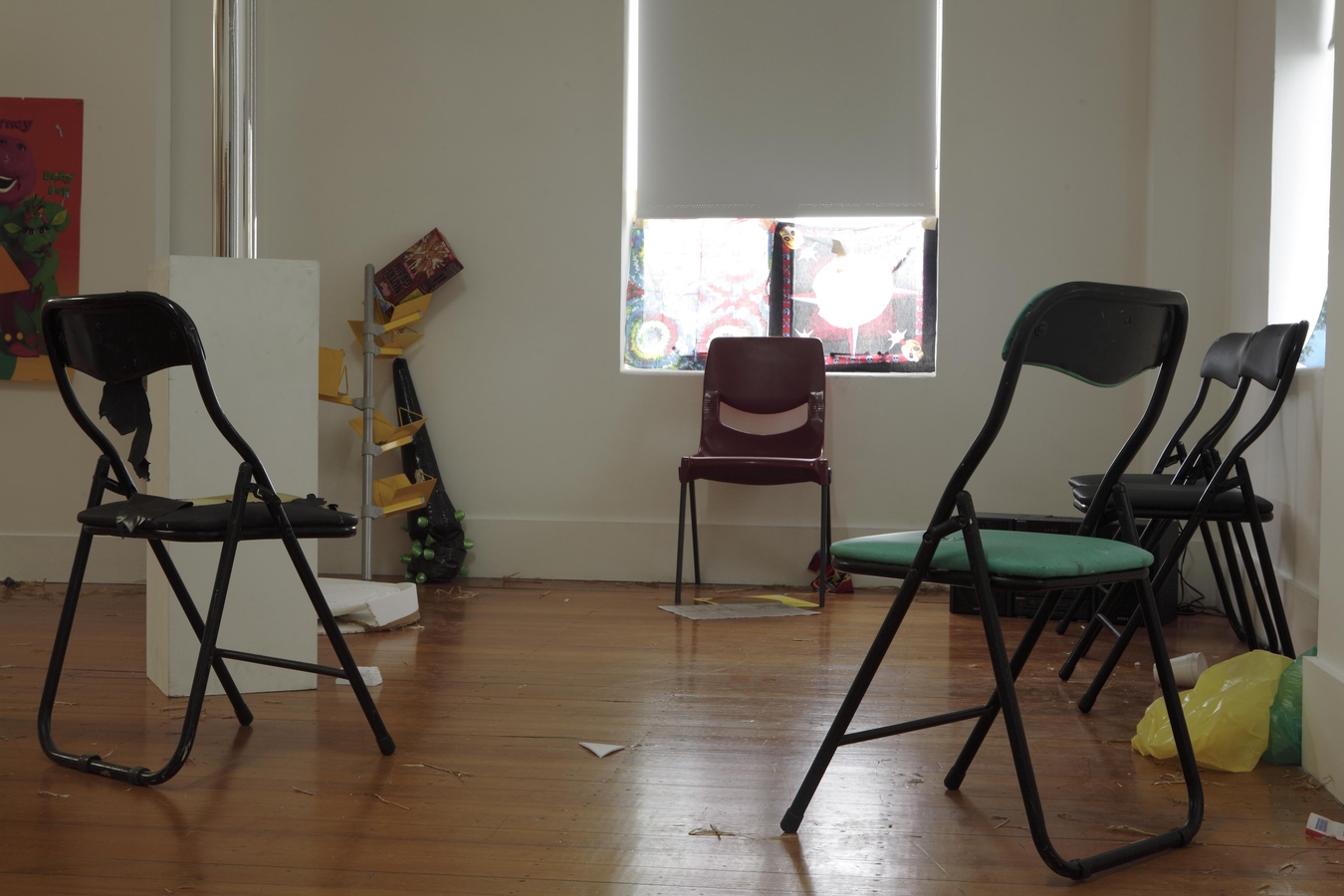 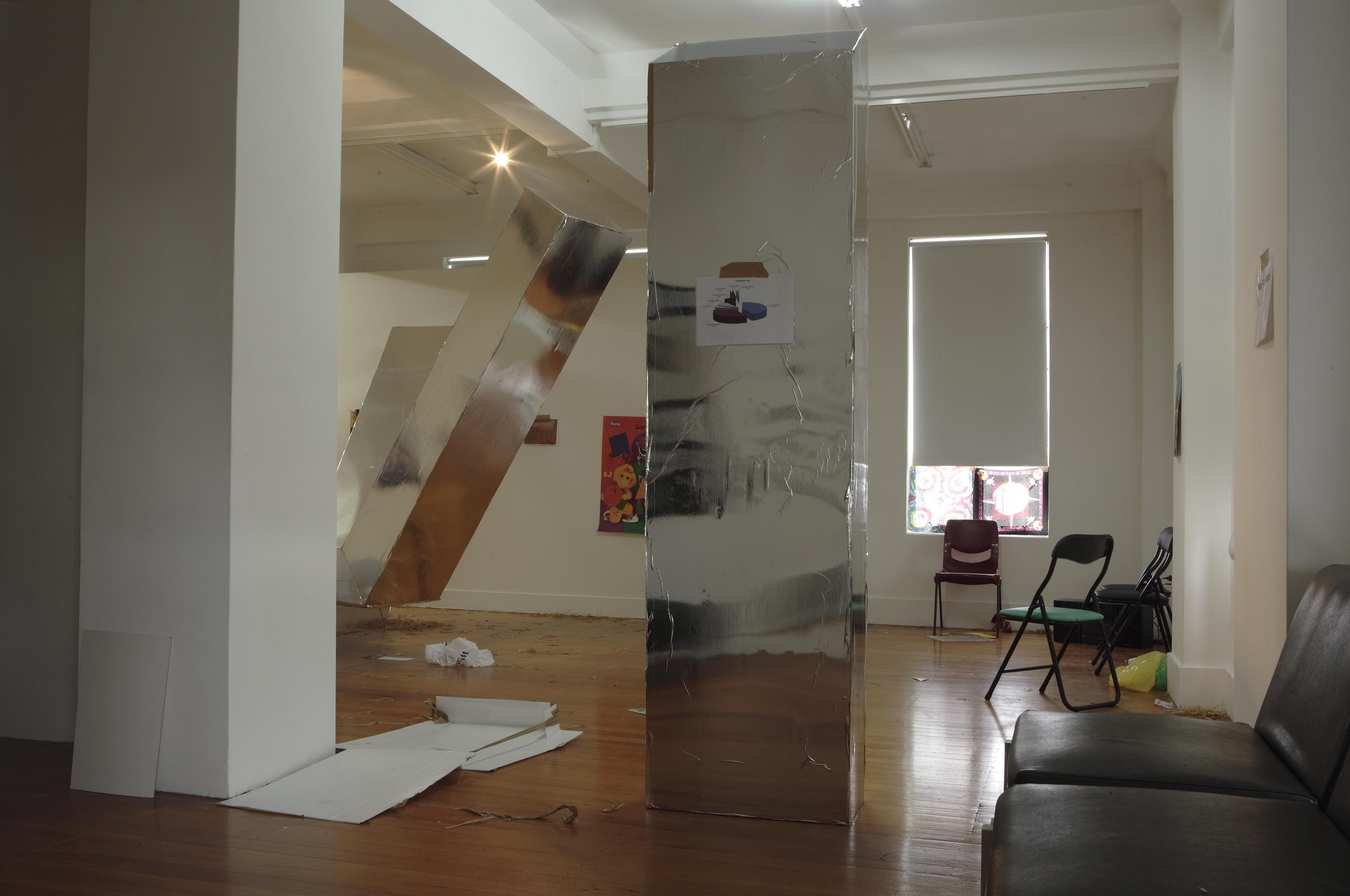 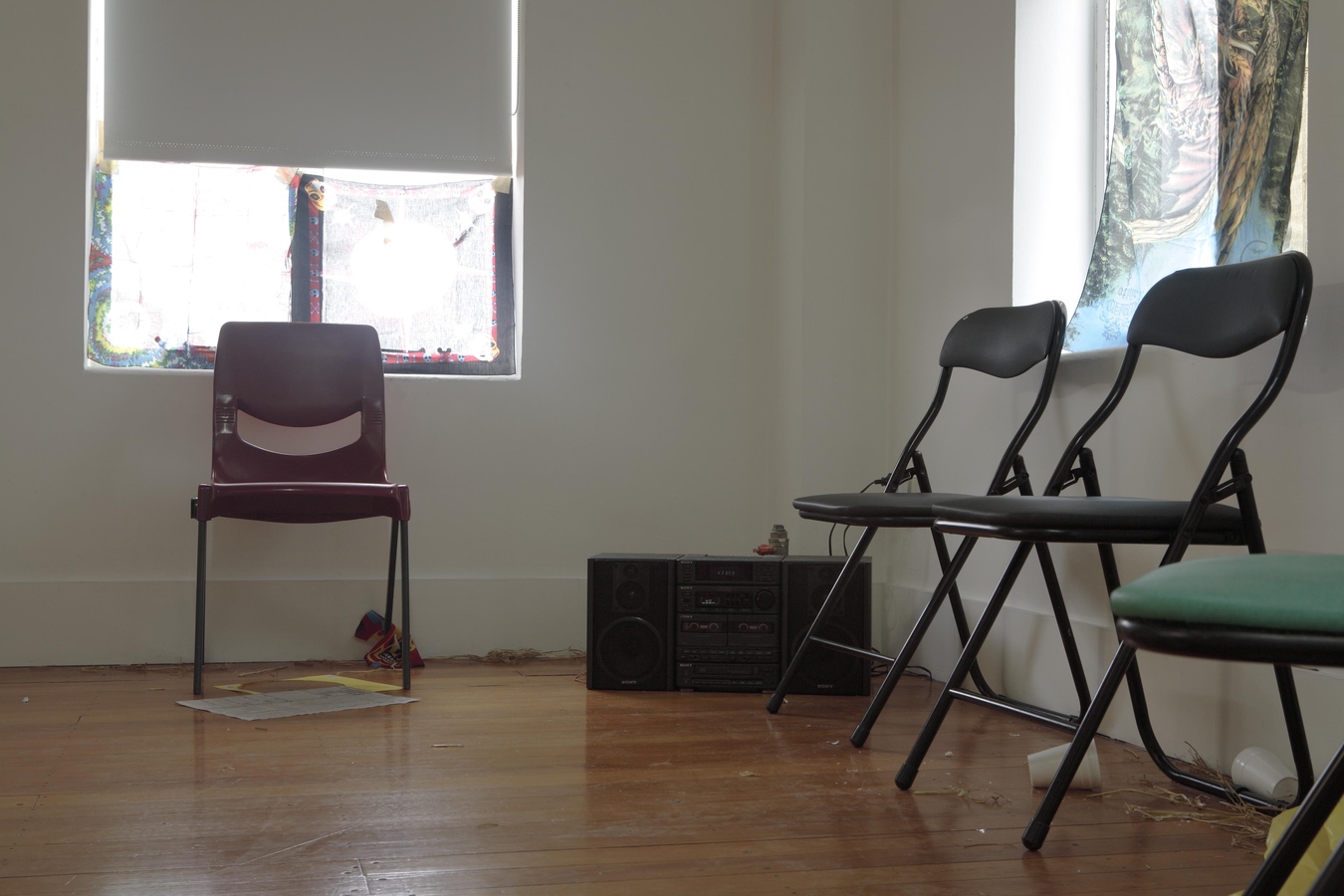 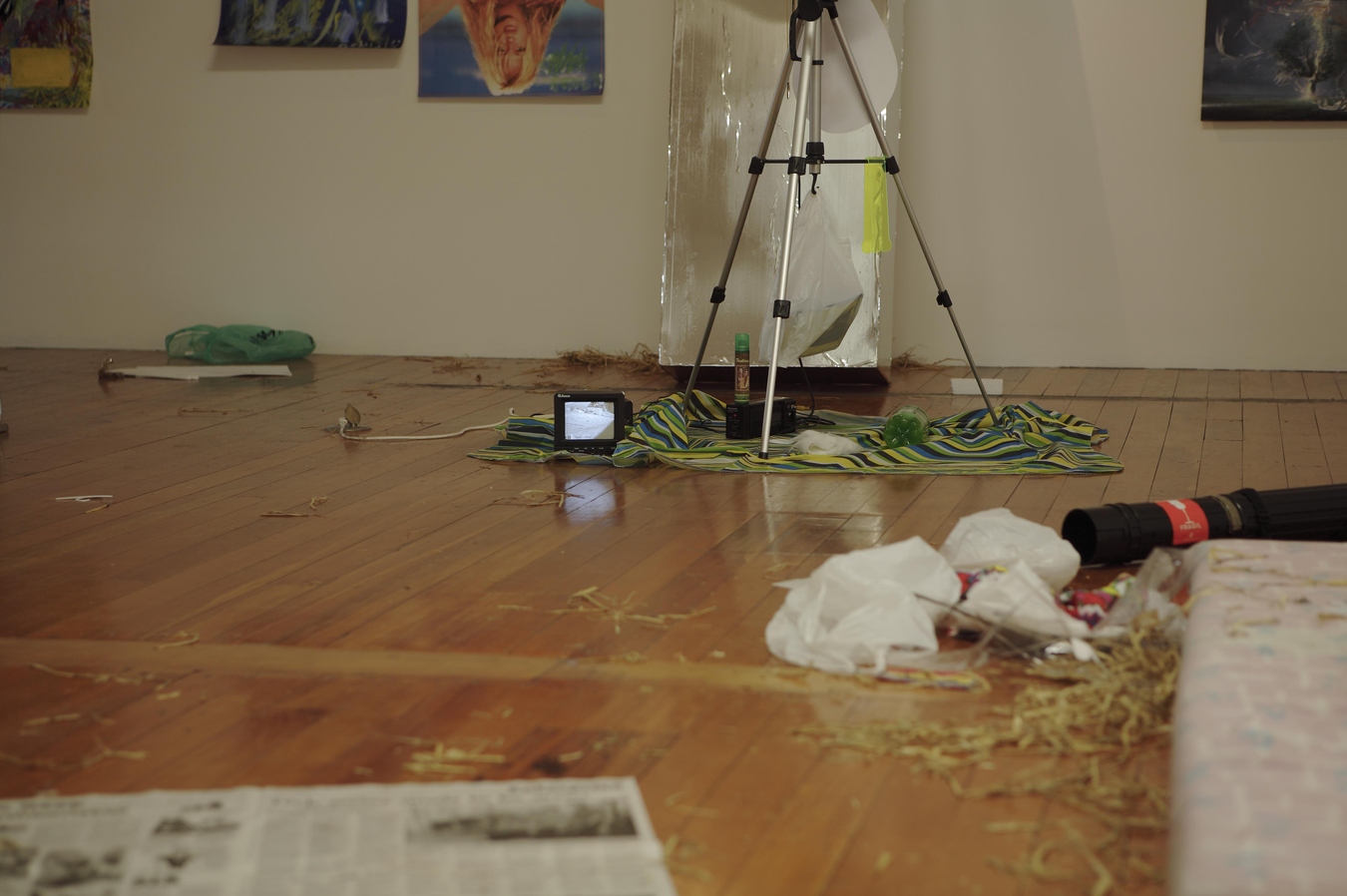 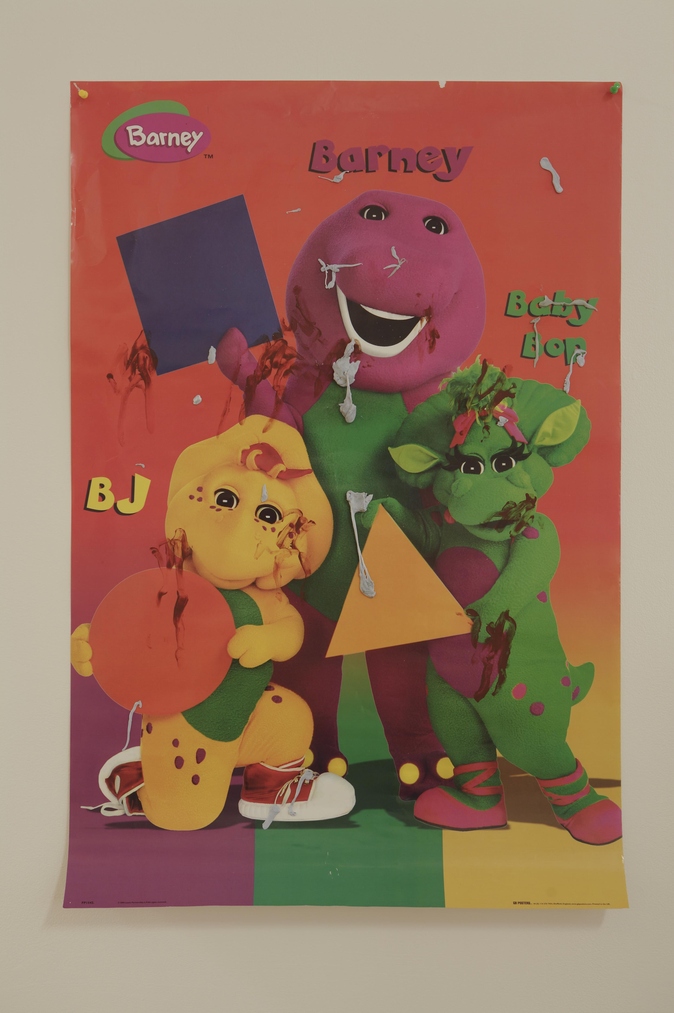 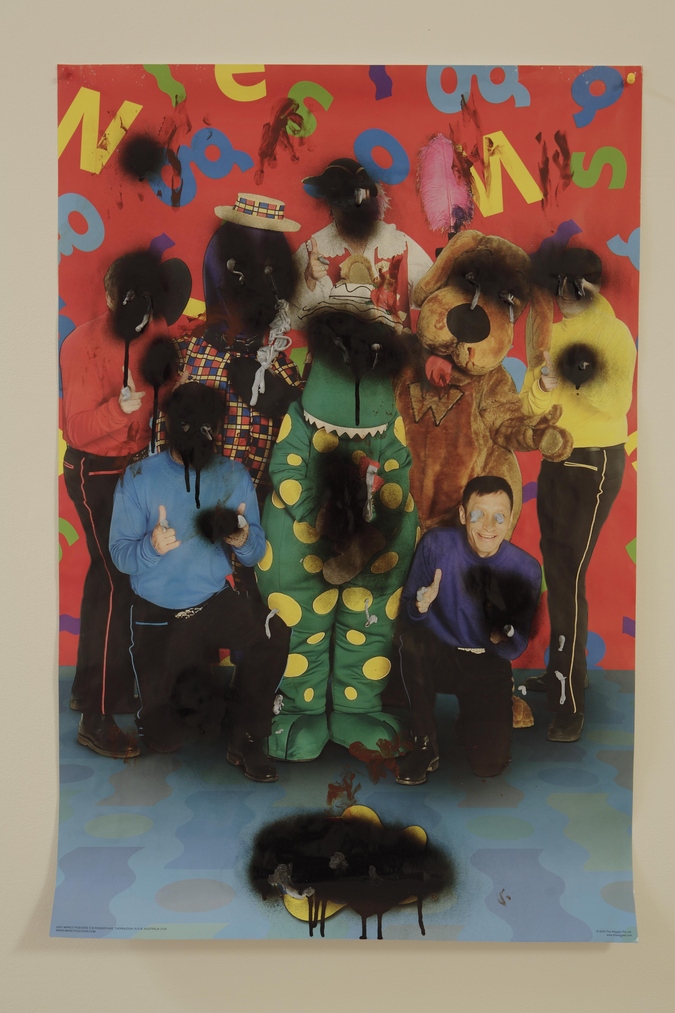 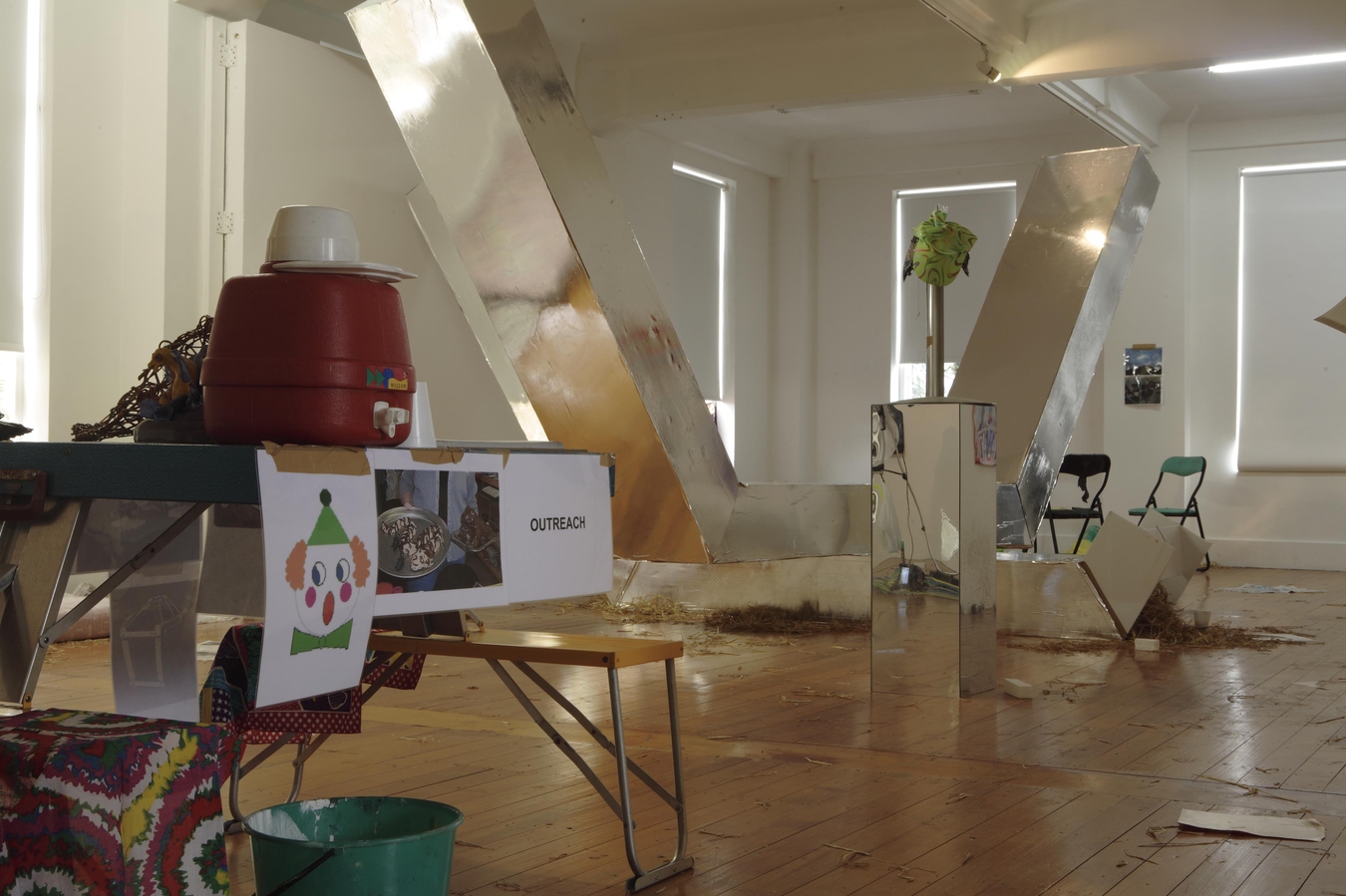 You would think that dwelling on the proliferation of mindlessness and the potential for depravity that this suggestively titled tableaux presents, Dan Arps’ Gestapo Pussy Ranch would position itself knowingly just over the line and deep in the trenches vs. notions of morality, propriety and the morbid leisure-driven society of the everyday. But here, fascism and pornography are more emblematic of the tyranny of influence and pressing demands for disclosure than actual sex or Nazis.

Returning to Christchurch for his first solo show here in six years, Gestapo Pussy Ranch promises to plumb postmodernism’s apathetic camouflage with straight-faced “cynicism” and sardonic panache. A title spotted by a young woman on a bookshelf in the aptly titled Bret Easton Ellis novel The Informers, Gestapo Pussy Ranch positions itself as a glossed-over, empty but invective title which functions tardis-like to set up a recursive fiction within a fiction.

As ever, Arps is more interested in the opening up of a space than providing an analogy for some sort of contemporary “topic”, unless the topic was the interrogation of the idea that art has static content. The spaces he institutes tend to wobble and shimmer conceptually as the tweakiness of our totally high capitalist delirium finds itself channelled with all the hyper-lucidity of the depressed.

Existing within an everyday realm governed by the excesses of postproduction, amidst the chaos of commodities and the conditioning that sustains their consumption, Gestapo Pussy Ranch is at once complicit and catalytic. Nesting within the presented scene Arps creates a narrative that is at once evasive yet frank. Presenting us with an abandoned, makeshift theatre, antithetical to the depopulated, clarity of the white cube, Arps subverts our expectations of the more “earnest” exhibitionism that usually takes place within the secluded domain of the gallery.

Just as the term Gestapo is shorthand for Geheime Staatspolizei, Arps asks us to discard the easily read surface in favour of the complexities of the multi-directional, deep-running currents that constitute our experiences of power via the most apparently unremarkable of things. If dominance is most often exercised through the social structures of censorship and denial, Gestapo Pussy Ranch trusts us to make much of the elements pooled together in this occupation of sorts in order to more thoughtfully expose those cultural flows that many would prefer to believe are best kept clandestine.

Dan Arps graduated with an MFA from the Elam School of Fine Arts in 2006 and has participated in numerous solo and group exhibitions in New Zealand and Australia. Arps has been complicit in a number of projects and initiatives including the artist run space Black Cube (Christchurch 2001 - 2) and Gambia Castle (Auckland 2007 - ongoing) and is one of the founding editors of online visual art magazine Natural Selection. Recent solo projects include Harsh Tudorbethan Reality (2007), The Engine Room, Wellington and Affirmation Dungeon (2007), Gambia Castle, Auckland. Other recent exhibitions and projects this year include the group show ARPS/TEAGUE/GEORGETTI, Michael Lett, Auckland; Existence, Waikato Museum, Hamilton; The Shining Path, Carlton Club and Studios, Melbourne; I Dig Your Voodoo, Joint Hassles, Melbourne; Omnipresents, Gertrude Contemporary Art Spaces, Melbourne; and Super Natural at The Physics Room in 2006. Arps is currently represented by Gambia Castle and Michael Lett in Auckland, and Neon Parc, Melbourne.