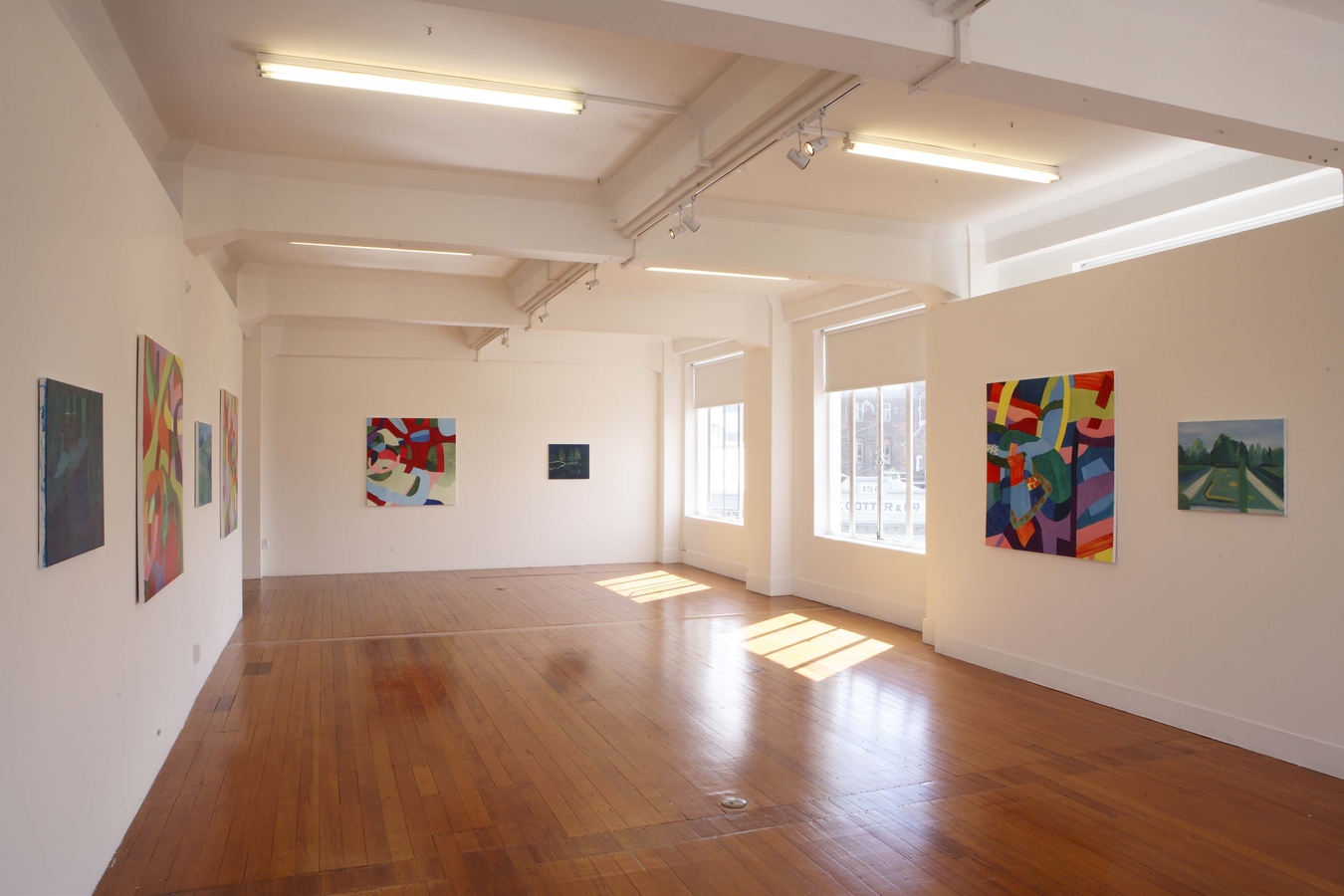 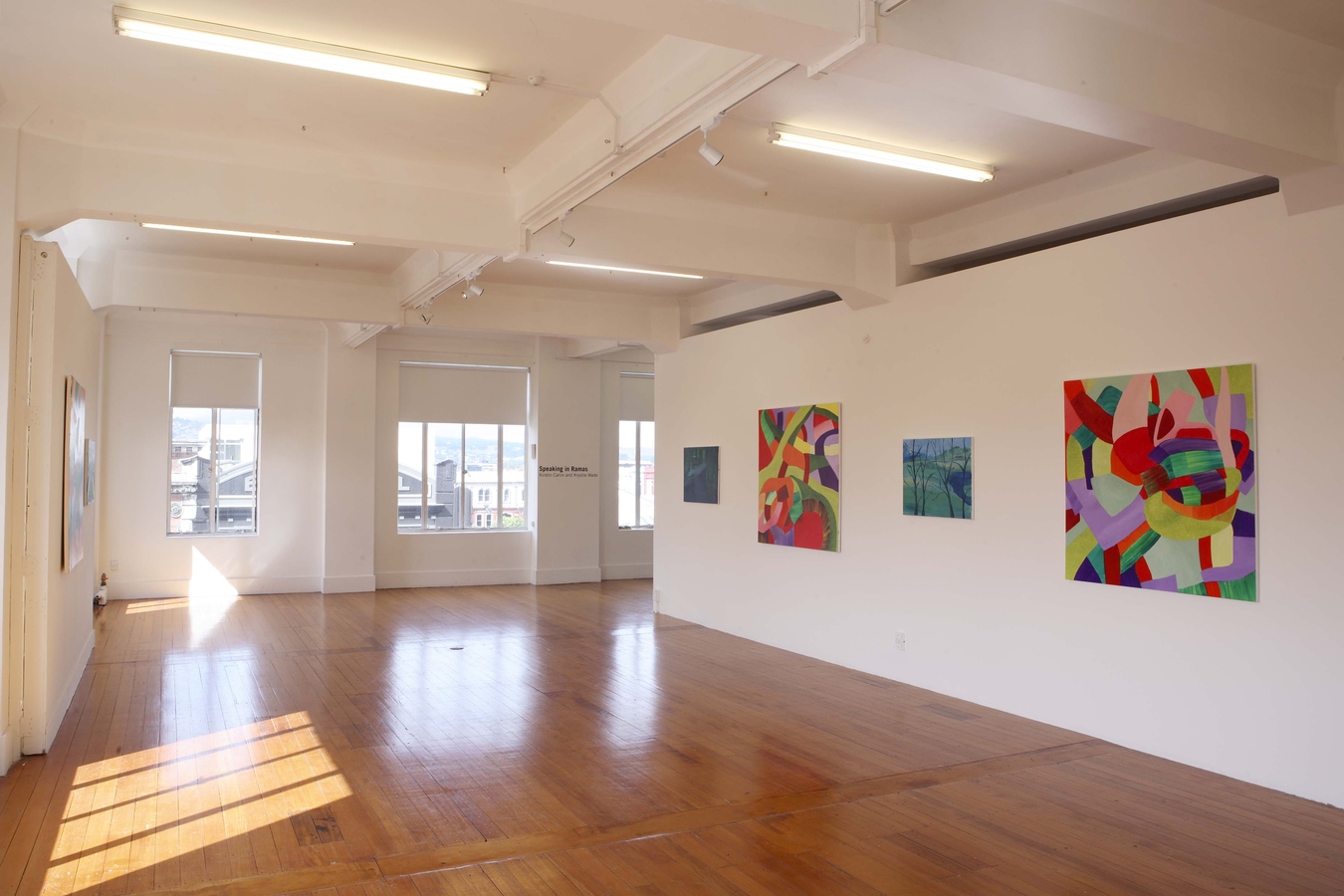 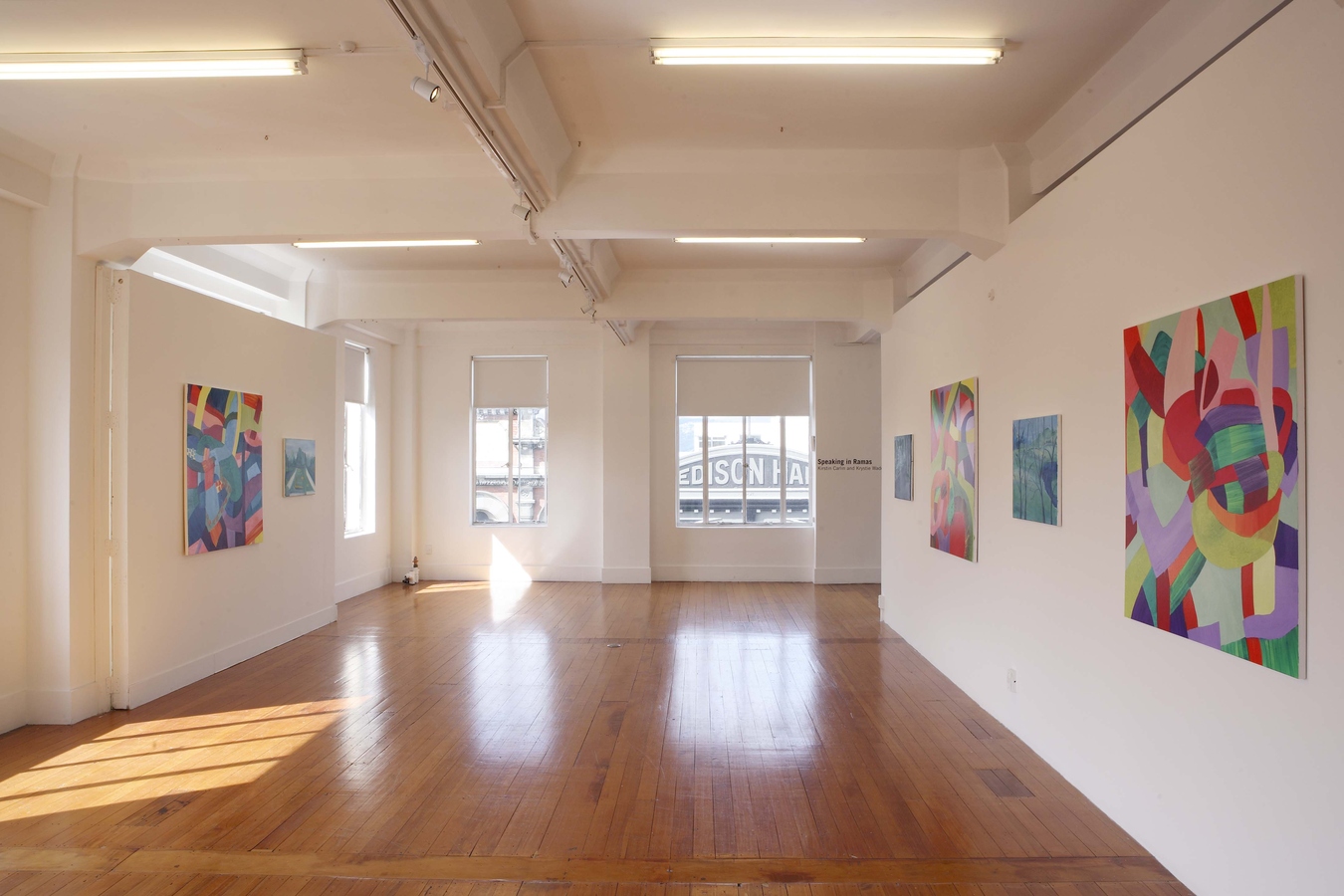 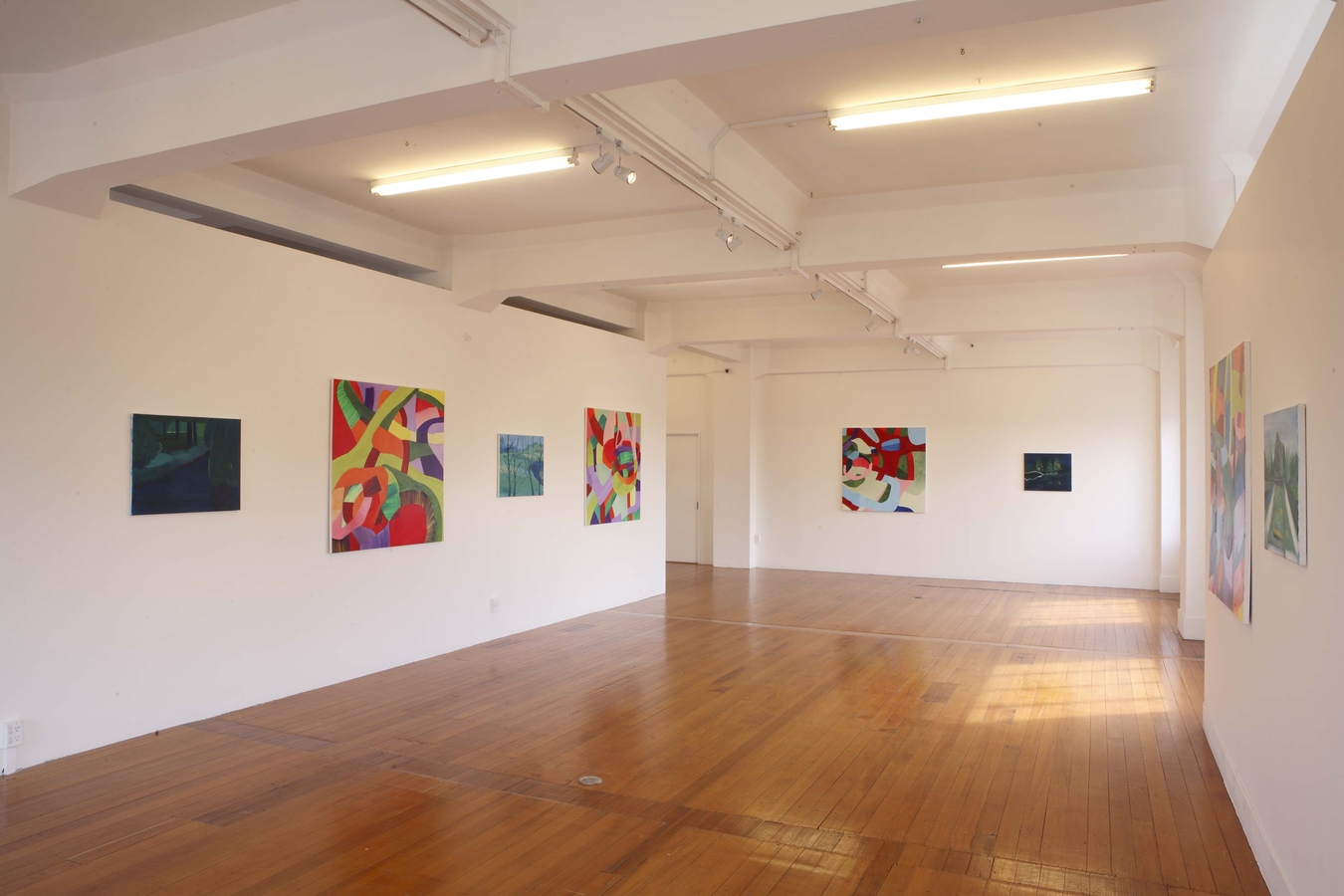 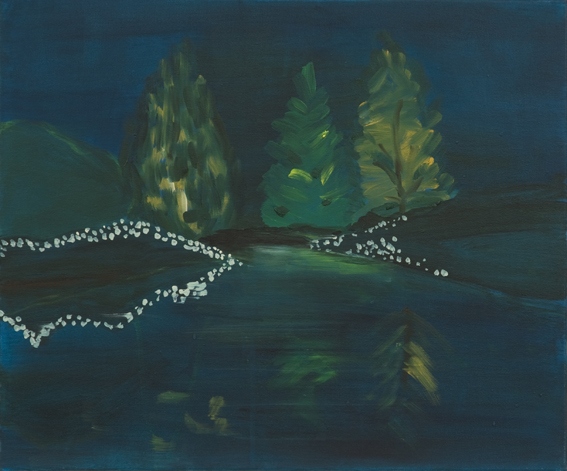 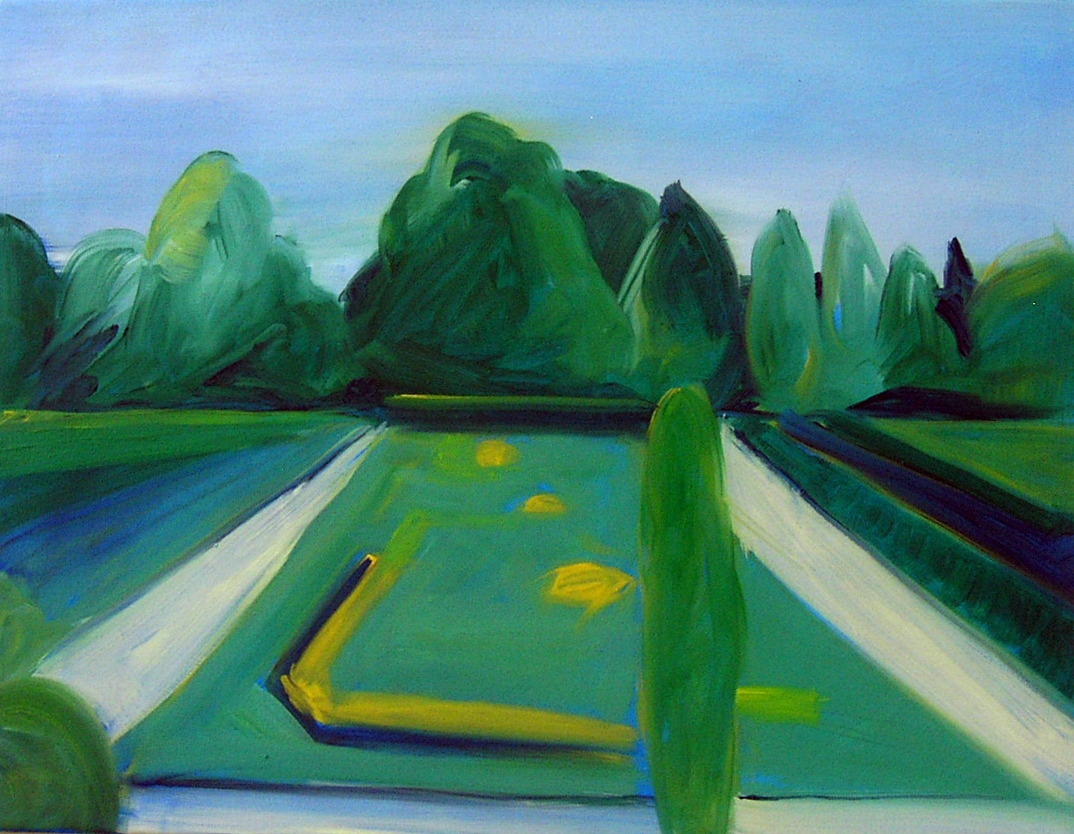 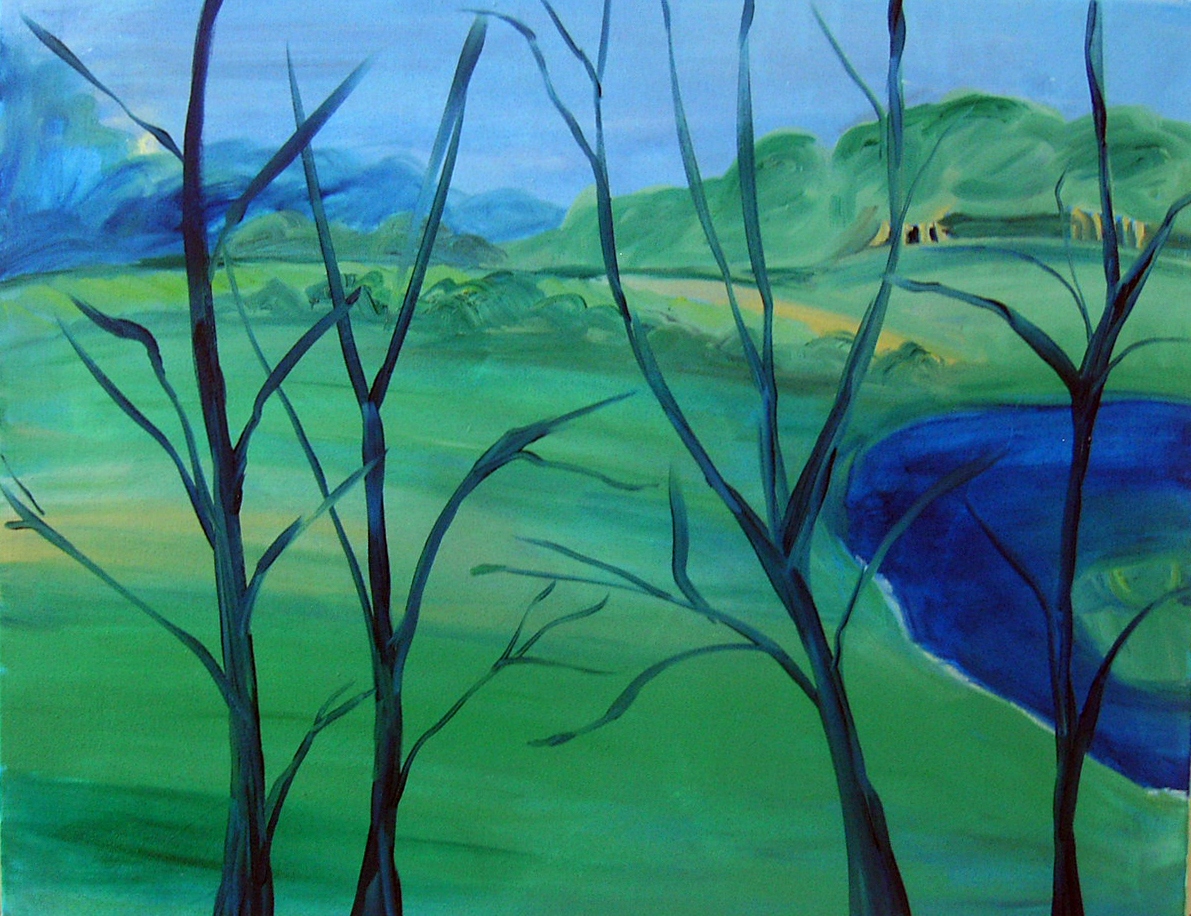 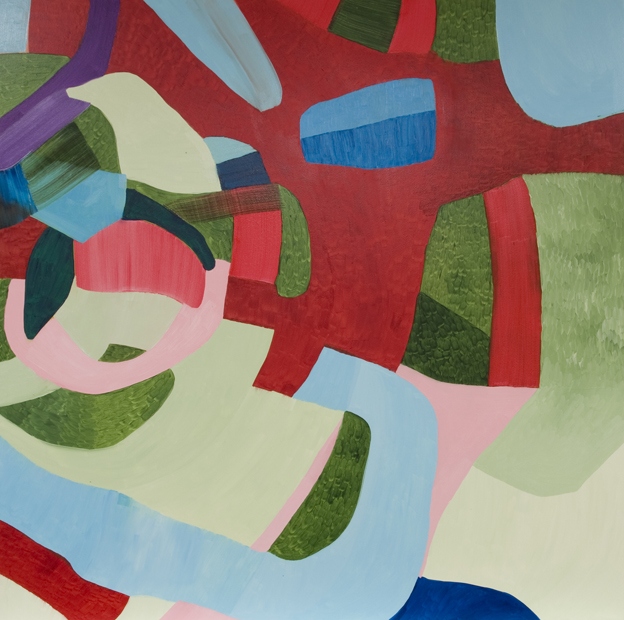 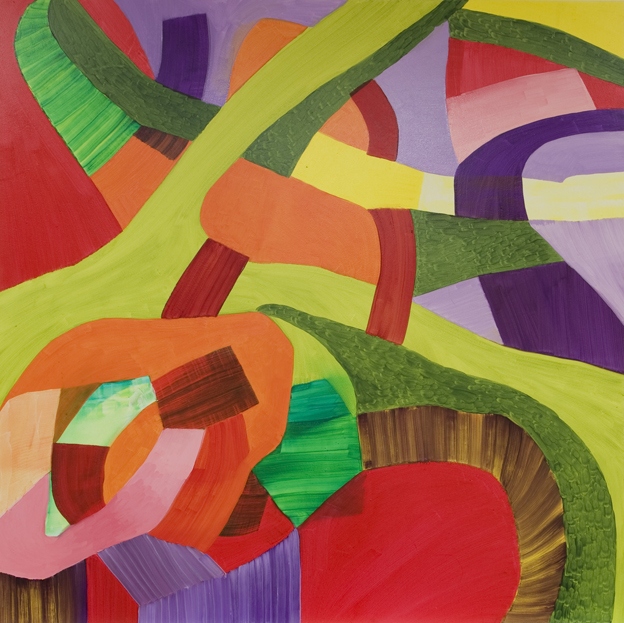 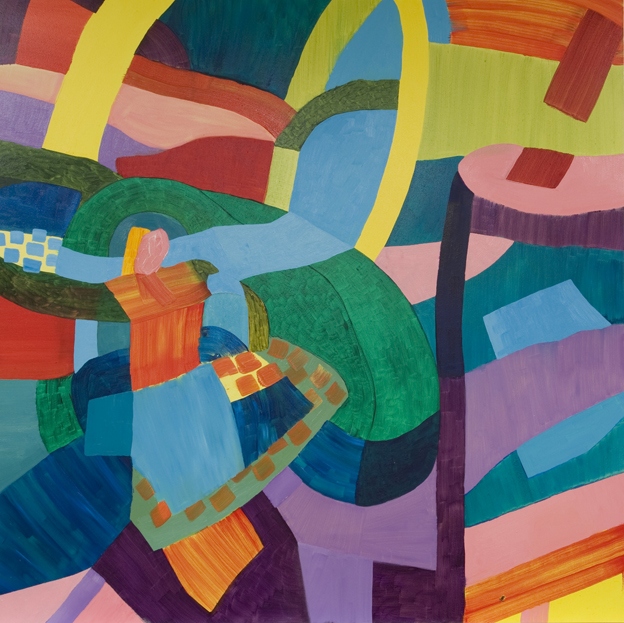 Taking the historical and conceptual notion of the panorama as their shared starting point, Kirstin Carlin and Krystie Wade have sought to interrogate panoramic pictorial devices and the process of stitching and blurring images to create the works on show in this collaborative project.

Intending to produce an exhibition that not only communicates ideas relating to the panorama and its pictorial function, but also an exhibition that celebrates the medium of painting, The Garden City with the colonial overtones of its historic provincial buildings and various coursing rivers that pass through it seems a particularly fitting location for a series of works that seek to blur the boundaries between notions of an evolving or passing landscape and its depiction.

Carlin focuses on the synthesis that must occur to produce any kind of panorama but the lines she bends are related more to her painting’s content and their source material than to the creation of alternative forms of stretched or elongated perspective. Drawing source material from postcard images of Christchurch and pictures sourced from the internet of Kew Gardens in London, Carlin’s fantasy landscapes simulate impossible sites.

Wade takes the disorientating physical experience of experiencing a full panoramic painting or image as her initiating moment. Yet she distances her works from the historical ‘truths’ that the most of the famous panoramas sought to display and chooses instead to investigate the artificial infinity of the panoramic painted surface with all its contorting and manipulated lines of perspective and evocations of movement.

Kirstin Carlin graduated from Unitec with a Bachelor of Design in painting in 2003. Since graduating from Unitec Carlin has exhibited her work regularly in artist-run and dealer galleries. After spending time living and working overseas Carlin returned to New Zealand and completed a Post-Graduate Diploma in 2007 at Elam School of Arts, Auckland University. Recent solo and group exhibitions held in Auckland include: Destination with Michael Harrison, Snowwhite, Unitec, Auckland (2008); Does Rudy Speak from the Beyond, rm103 (2008); Paintings (Curated by Sam Rountree-Williams, Richard Bryant and Patrick Lundberg), Window Space, Auckland University (2008); Lipstin, Anna Miles Gallery, (2007). Kirstin is represented by Anna Miles Gallery and lives and works in Auckland.

Krystie Wade graduated from Unitec in 2004 with a Bachelor of Design in painting. She was chosen to represent Unitec at Bremen University in Germany in 2003 where she studied under Professor Karin Kneffel then travelled to Norway, Australia, and the USA. She has exhibited in a number of exhibitions in New Zealand and abroad including: Christmas Show, Whitespace, Auckland (2008); Joyeux Noel, Kobo Chika Gallery, Tokyo, Japan, (2008); New Paintings, Whitespace, Auckland (2008); Pretty Pretty, Snowwhite, Unitec, Auckland (2007). She has also been a finalist in a number of awards including the James Wallace Art Awards and the Agendo Art Awards in Melbourne Australia. In 2009 she will participate in an International Residency at Can Serrat Art Centre in Spain and her work will be included in the soon to be published book Seen this Century by Warwick Brown. Krystie works from her studio in Epsom, Auckland and is represented by Whitespace Gallery.