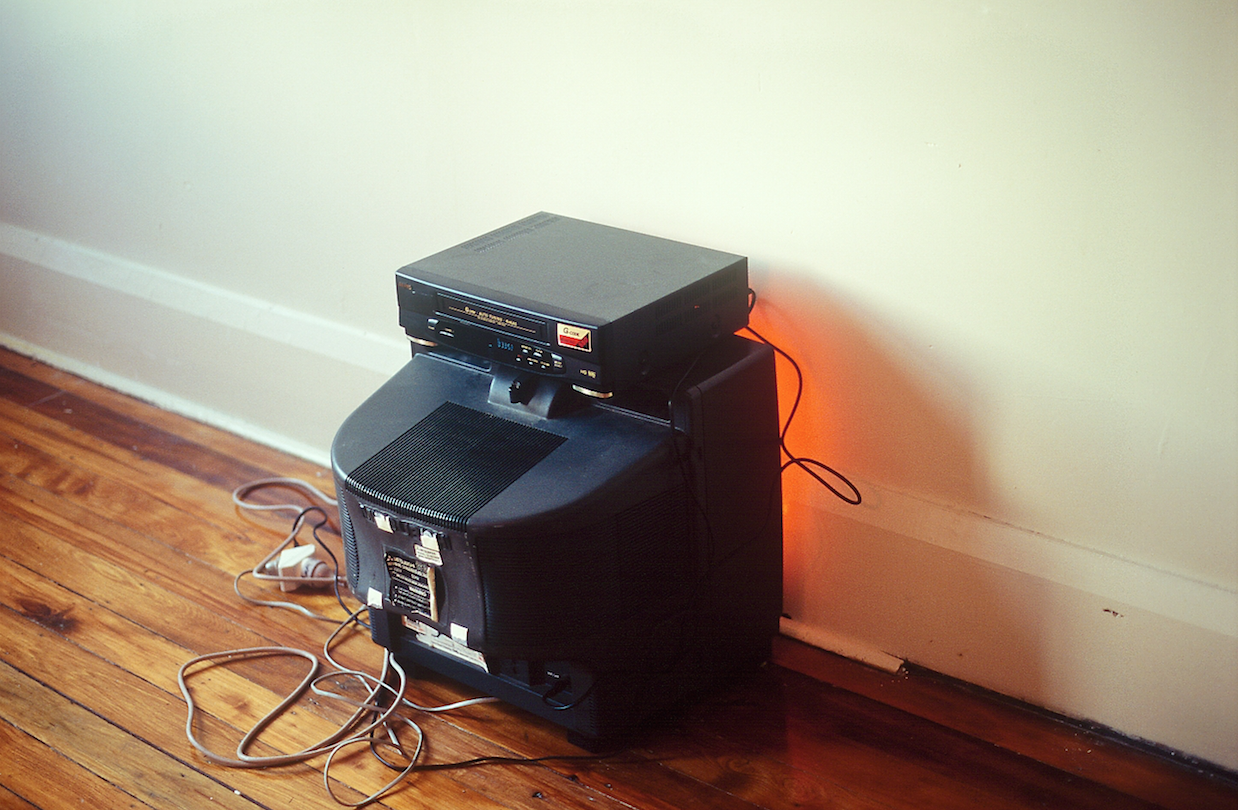 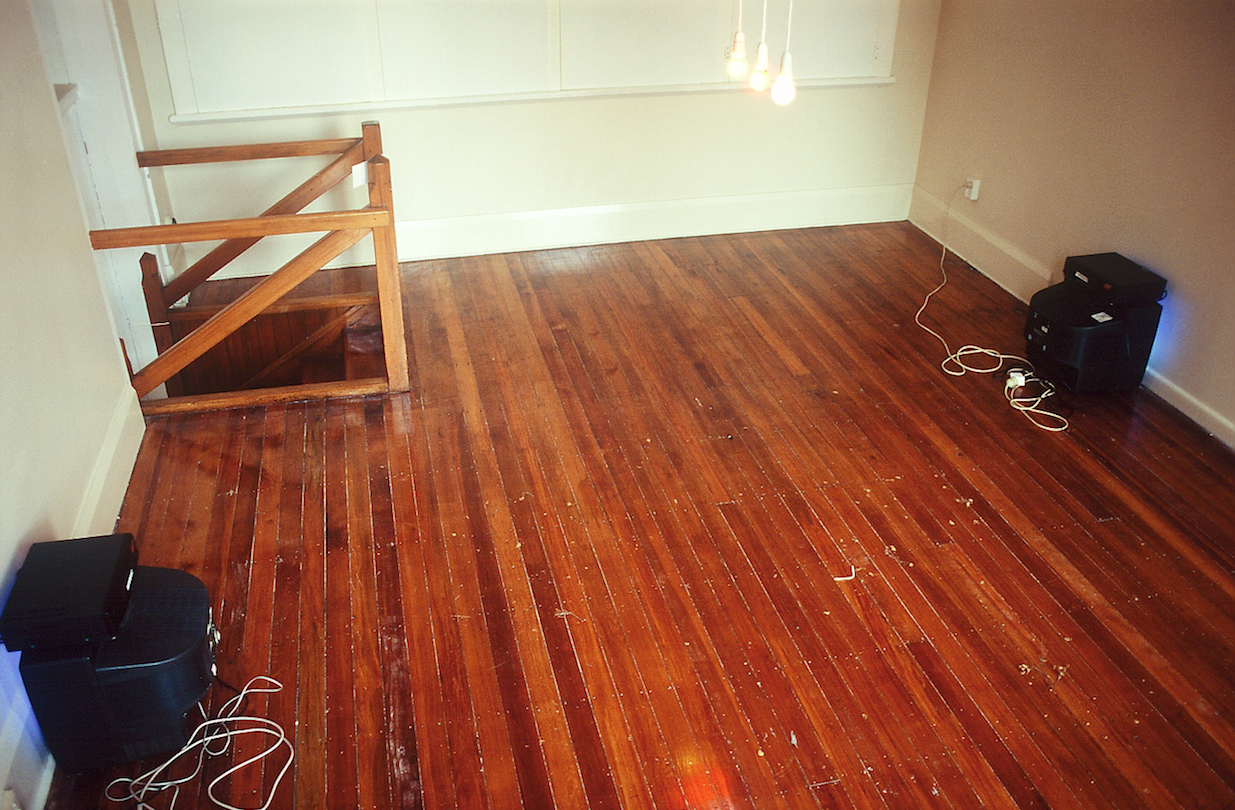 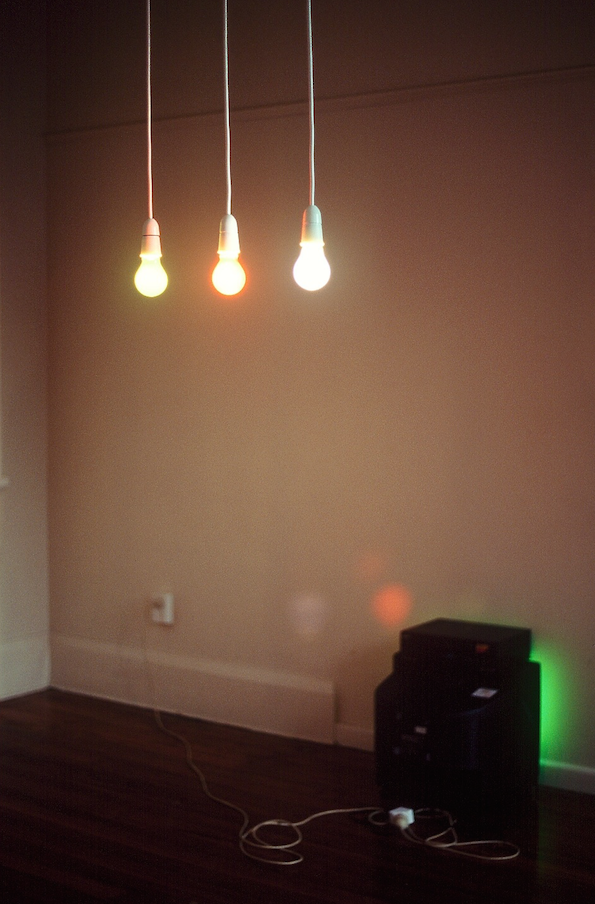 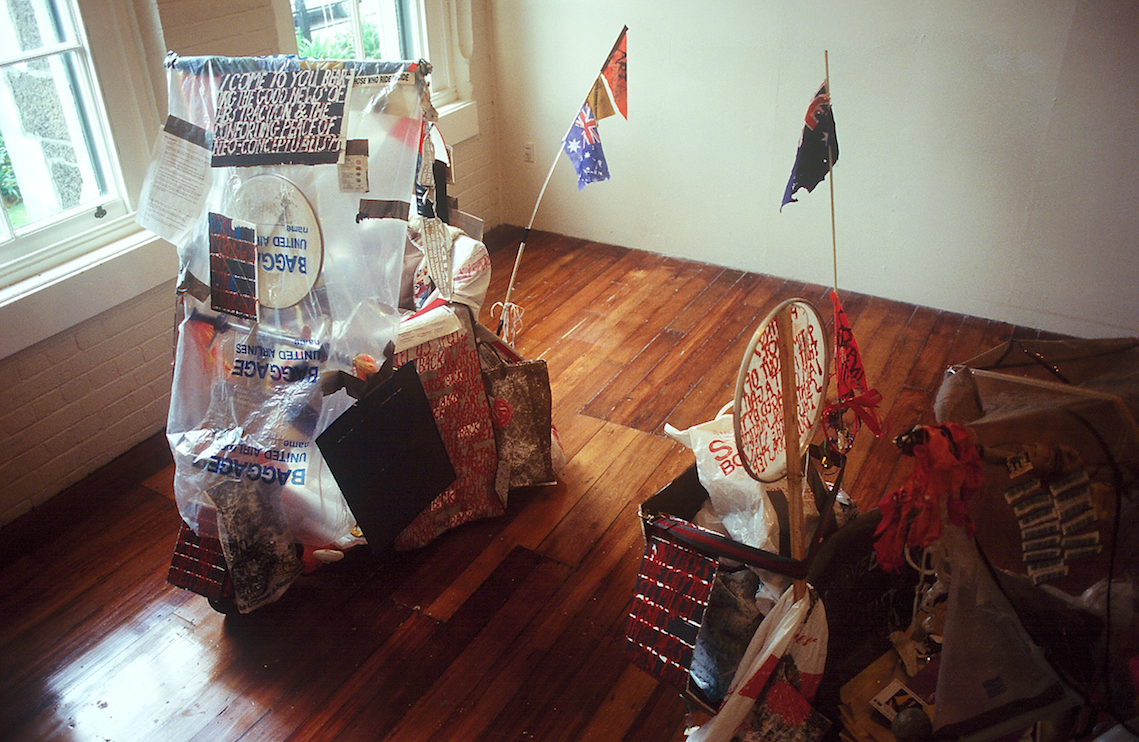 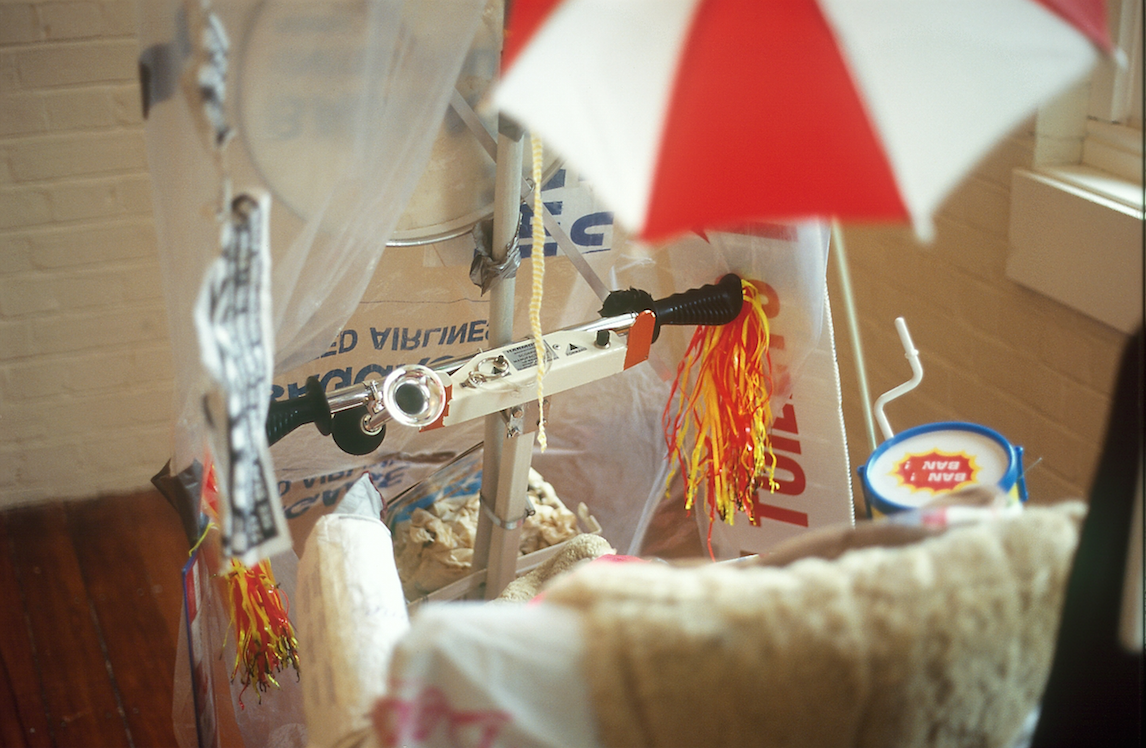 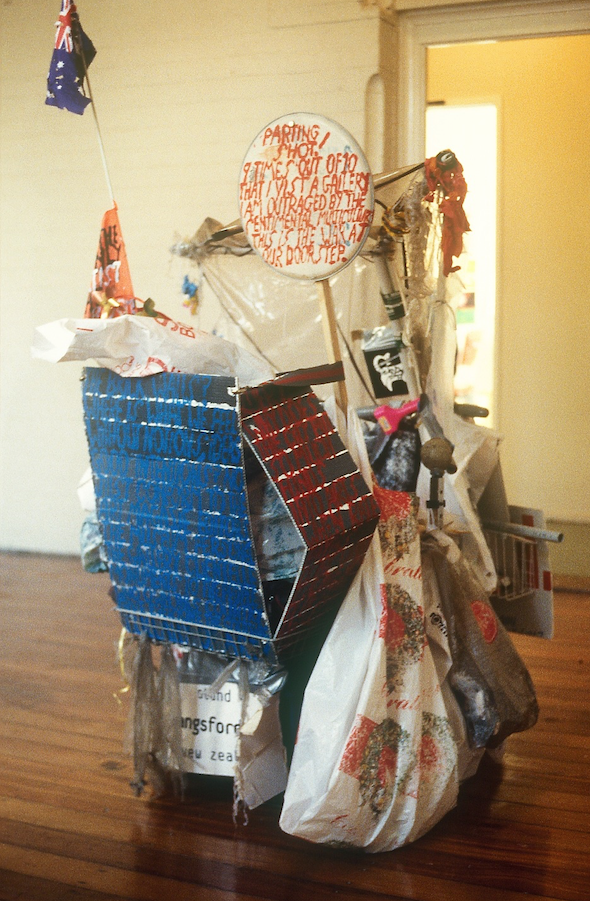 Phil Dadson & Mike Stevenson, the two artists paired for the third of the three shows in 3x2 are established artists.

Phil Dadson's voicings is a work that has evolved over a period of weeks involving a process of communication between the artist and the Physics Room Gallery staff. Unable to attend in person, Phil requested video documentation of the space to help him build a visual and aural picture of the site. The artist's initial intention was to create a work that was responsive to the space it was destined for, in other words, was site-specific.

In the course of this correspondence, however, the methods of communication (in this case video tapes and email) have taken precedence over the contents of the messages. For Dadson, the nature of the video medium itself is just as important as the content of the video. Dadson alludes to the medium with its three different light sources, red, green and blue, in the monitors themselves, the hanging lightbulbs, and the "choir" of balloons at the opening night. Dadson forces us to think about the intrinsic qualities of video by inverting its usual positioning as central yet unobtrusive. His inverted monitors are obtrusively perverse seeming to thwart the smooth flow of communication while drawing our attention to its very machinations.

In the tradition of a performance or happening, Dadson's installation will not be static, rather the artist, even from a distance, is engaging in an interactive work which encourages the viewer to participate. The artist is throwing open a channel of communication and allowing himself the provision to change the physical elements of the installation in a continual cycle of response over the course of its duration. Dadson's instructions to those present at the opening were to sing a note into a balloon filled with helium, so that a choir of colour and stored sound resonated on the ceiling.

Mike Stevenson's LET THOSE WHO RIDE DECIDE could be seen as a sort of Trojan Horse inside the refined space of The Physics Room.

"These customised shopping trundlers and invalid scooters look right out of place in the elegant and formal context of an art gallery. Perhaps they have been left here by accident and will soon be tidied out of the way. The cranky texts and the weird mix of objects attached to the trolleys make them look like they belong to the type of eccentric individual that society doesn't quite know what to do with. These trolleys, or 'jeeps' as the artist calls them, suggest that Mike Stevenson is playing the role of a marginal type, an outsider, an embarrassing bag-person of the art world. A friend of the artist has said that Stevenson's trolleys look as though they belong to artists who are no longer famous.
The writing on Stevenson's placards and drum-skins recalls the painted texts of the naive and visionary Southern American artist/preacher Howard Finster and the paranoid roadside signs of Jessie Howard from Missouri. Like Finster and Howard, Stevenson takes on the role of a prophet with a razor-sharp wit probing the foibles, hypocrisies and conspiracies of the world around him; in this instance it is the schemes and rhetoric of the art-world that is his target. Stevenson weaves threads and connections between a host of art-world names, ideas and institutions. As watchdog and whistle blower for the art-world Stevenson seems on one hand to have power over 'the system' through his prophetic interpretations of it and on the other hand to be cast outside it because of his nonconformist behaviour. His trolleys declare a brittle omnipotence as well as a sense of frustrated powerlessness.

In the manner of earlier modernist magpies of urban detritus such as Kurt Schwitters or Robert Rauschenberg, Stevenson festoons his trolleys with found materials. Big name dealer gallery signs from international art fairs provide a form of stolen authority and prestige. A carry bag from the most famous art shop in the world, Pearl Paints in New York, is aligned with Pearl brand drum kits; the drum skins also reference the percussion-based performances of New Zealand artist Phil Dadson and Julian Dashper's recent abstract paintings on drum skins. 'Pervert mirrors' extending from the side of some trolleys recall Jasper Johns's sculpture of a school boy's shoe with small mirror attached. The diagram of the square and cross that Stevenson compares to the swastika reiterates the links between minimalist art and sinister power that some have observed in Frank Stella's use of painting titles which come from Nazi concentration camps."

A response to the exhibition by Nick Cain (pdf)