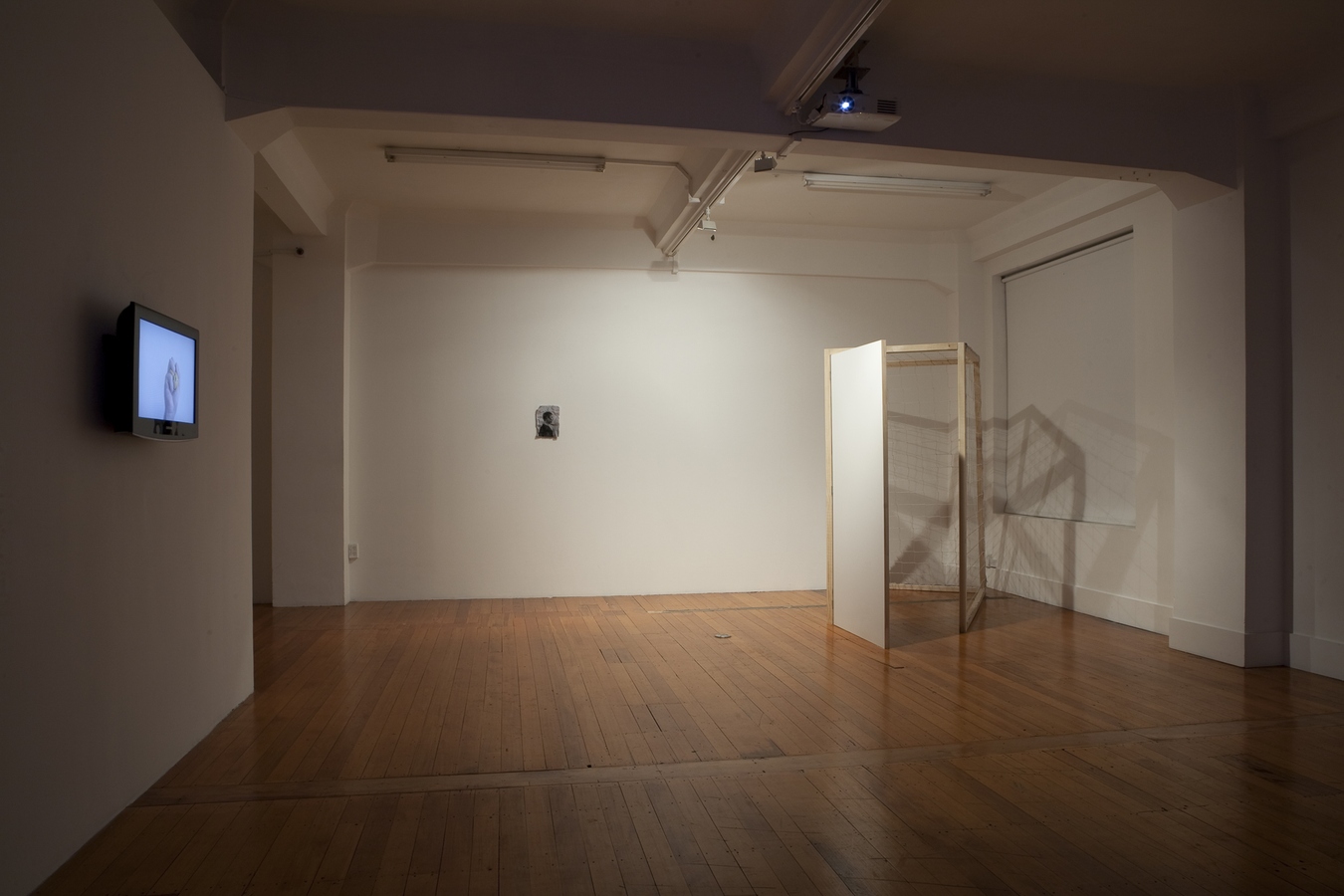 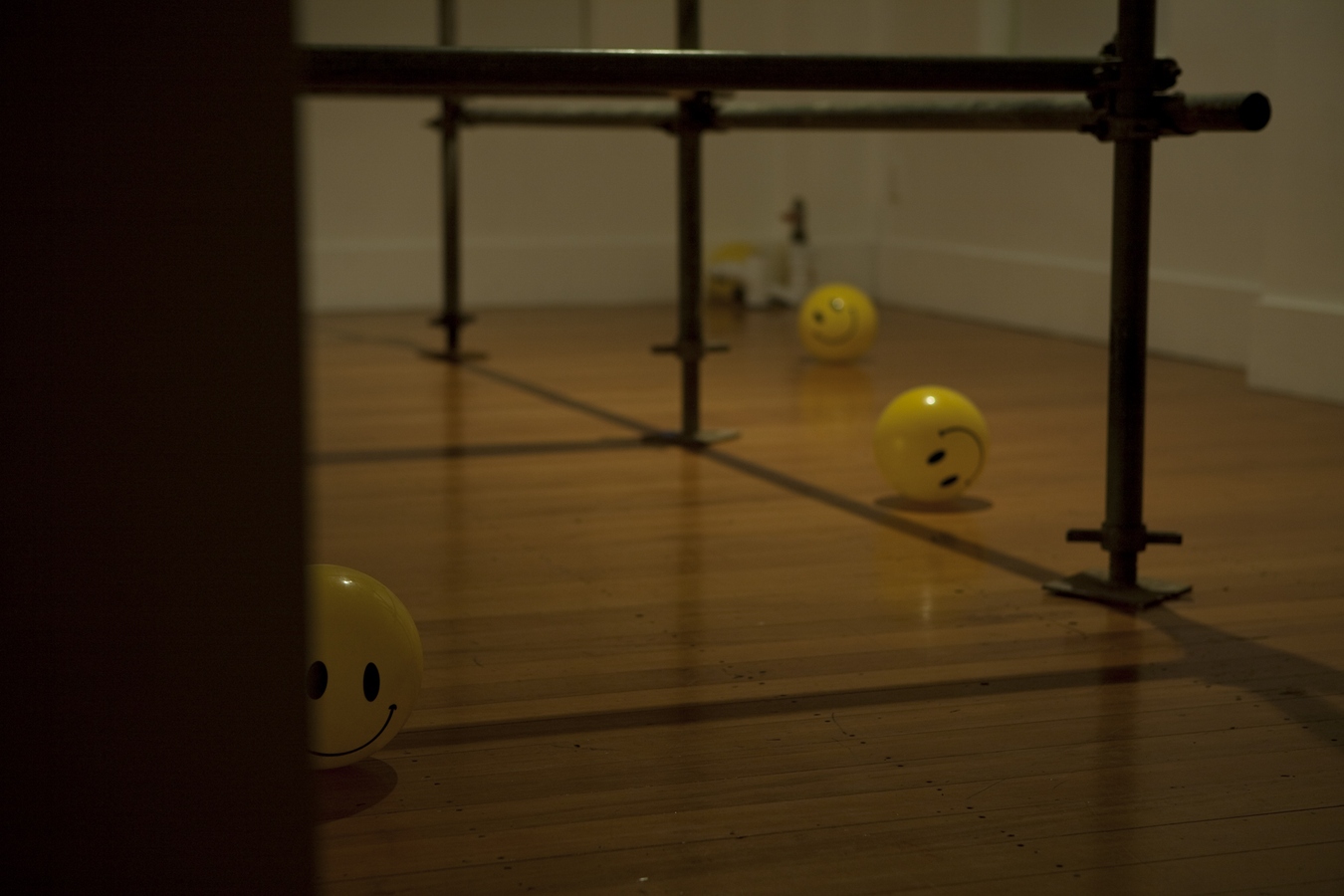 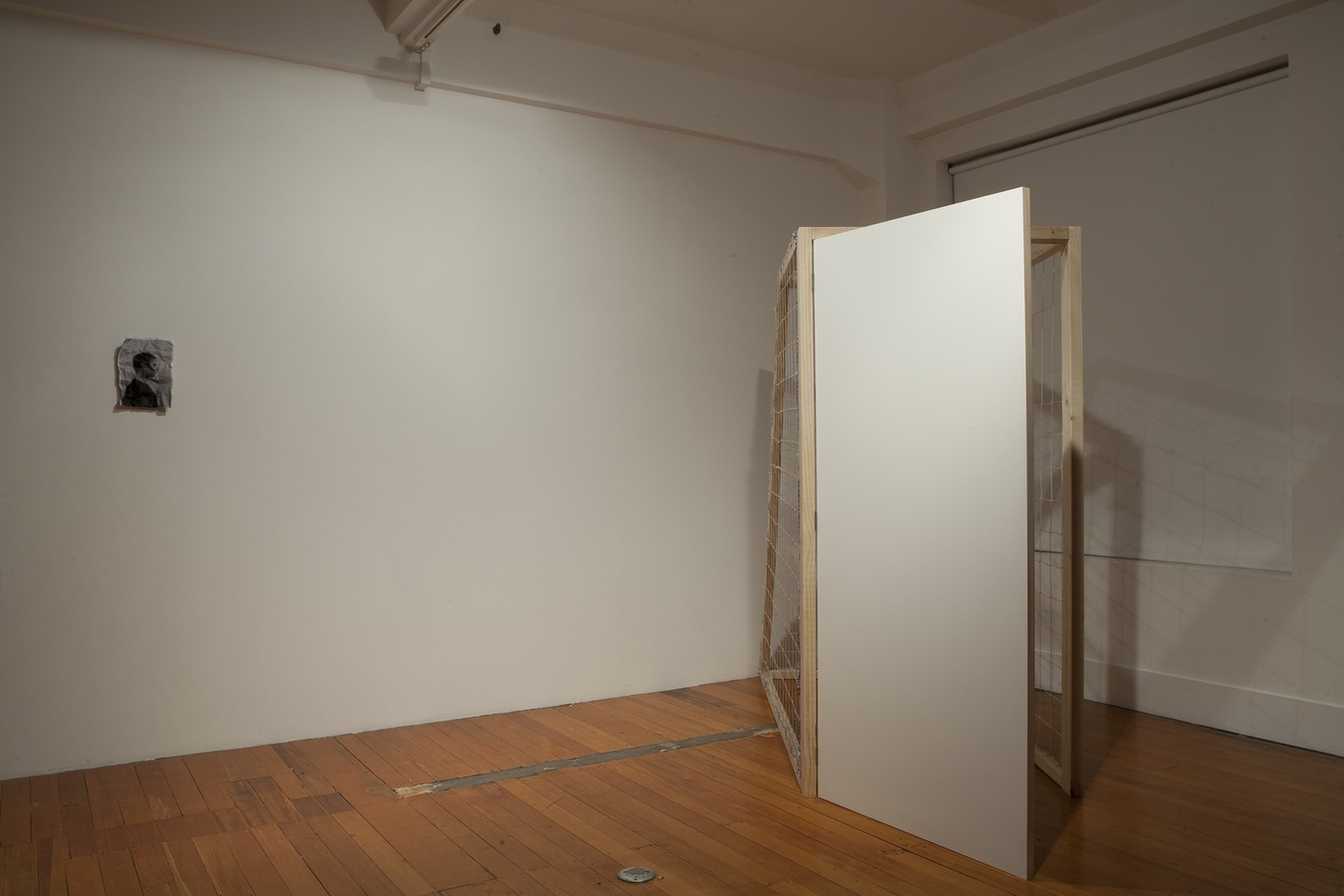 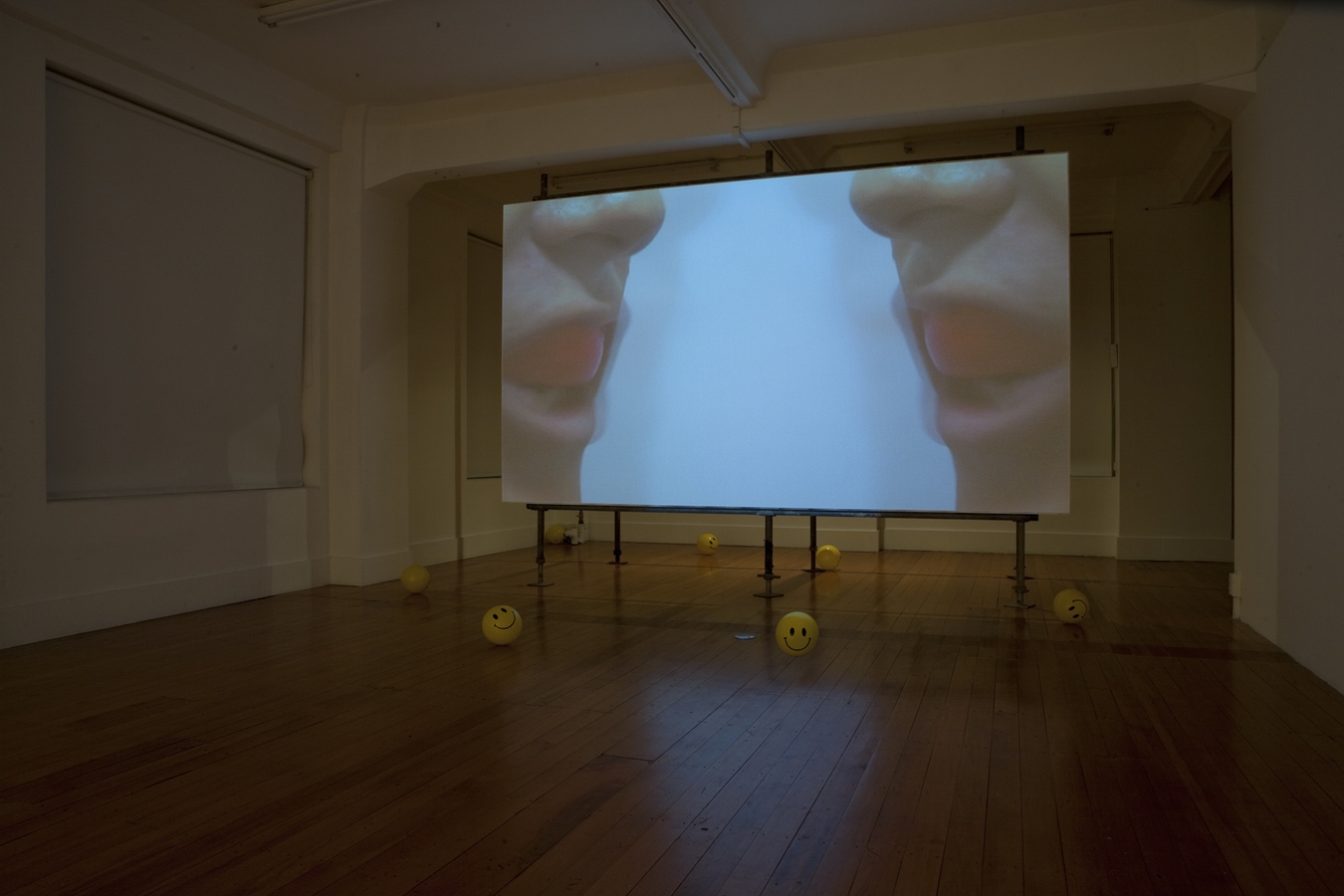 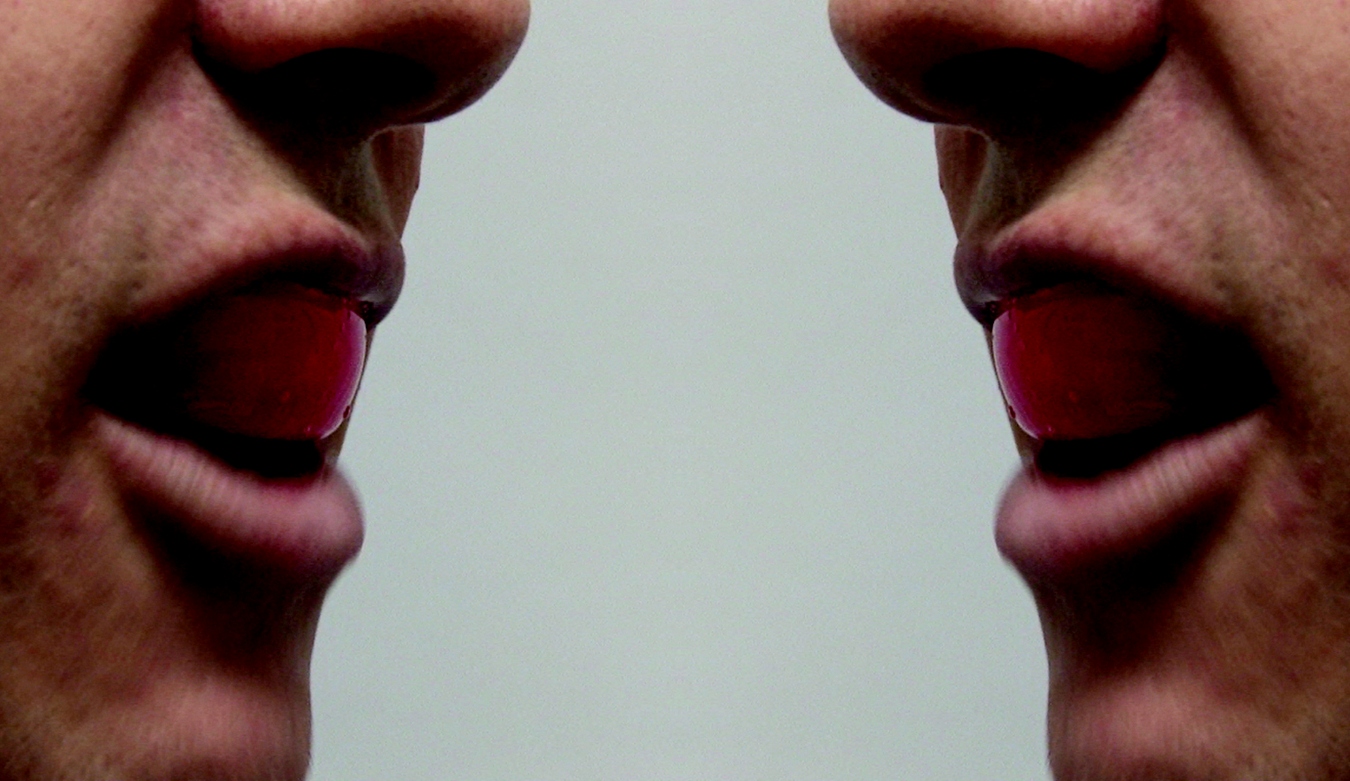 Just imagine what you might be capable of if you put your mind to it. Well aware of the untold possibilities that positive affirmation techniques and appropriate goal setting strategies could hold for those game enough to submit to such sensible rigours, for his second solo project for The Physics Room James Oram tilts the field of the gallery in his favour and in the process clearly affirms his strangle hold on the attributes of persistence and unwavering intent.

Drifting between the uneven expectations placed upon us by social mores and other implicit codes of conduct and the more chivalrous, controlled zones of sporting rivalry and fair play, Oram’s installation Game Face invites its viewers to reassess their own personally held goals and the stakes that we might be prepared to raise through our attempts to meet them.

Harnessing and muffling the potency of the kinds of statements associated with self-improvement mantras and reprogramming techniques, even with his game face on and the spectre of performance anxiety in the air, the goal posts haven’t shifted too far for Oram as his continued investigation of the absurd possibilities of relentlessly regulated cycles of action attests.

Caught in an endless loop of recitation that pits Oram in a controlled face off against himself in a new moving image work produced for this exhibition, Oram’s thwarted aspirational enactments are peculiarly illustrative of the potential pitfalls and ensnarements that reside within the scope of even the most seemingly benign motivation or self-imposed measure of performance.

James Oram is currently based in Christchurch and graduated with a Bachelor of Fine Arts in Sculpture from the University of Canterbury in 2003. Oram currently has work on show in Unnerved: The New Zealand Project at the Gallery of Modern Art (GOMA), Brisbane, an exhibition of works from the GOMA collection which also will tour to the National Gallery of Victoria, Melbourne later in 2010. Other recent projects and exhibitions include: The Ultimate Time Lapse Megamix, Next Wave Festival, Melbourne (2010); See change, SCAPE Biennial of Art in PublicSpace, Christchurch (2008); Stay Down, The Physics Room, Christchurch (2008); Another Destination, Christchurch Art Gallery (2007); The Good Life, HSP, Christchurch (2007); Open Slate, Gallery 33, Wanaka (2007); and Feeling the Burn, SOFA Gallery, Christchurch (2006).

Additional support for James Oram’s new works for this exhibition was generously supplied to the artist by The Christchurch Community Arts Council.