Comprising the talents of Greg Malcolm on guitar, Marc Howe on bass and Chris O'Connor on drums, Surfing USSR draw upon a diverse range of musical genres in their interpretation of Eastern European Melodies. Their versions stylistically range from disco to psychedelic freak-outs. Surfing USSR's authenticity was recently questioned after a media leak revealed that only one band member really surfs however their popularity has not been affected.

Their debut CD 'Surferdelic' features many of the songs that made them famous after modifying their show based on the many suggestions received in their suggestion box throughout their tumultuous career. Surfing USSR are based in Christchurch (by the beach of course) and have been performing their surf klezmer throughout the South Island for the past 4 years.

In 2002 Surfing USSR toured the South Island as part of the Arts on Tour programme and were featured on Television 2's Shred with Jeremy Wells, National Radio's The Sampler (15 minute feature) and syndicated Student Radio show Uncharted (30 minute feature).

Surfing USSR's market research has been extensive with five years of performing and over 200 suggestions received from keen audience members. Surfing USSR hand out a Suggestion Box and encourage the punters to give feedback using the forms from Big Fresh Supermarkets. "Did you enjoy shopping with us? What do you like? What didn't you like? We would love to know". This provides entertaining after show reading as well as direct feedback.

Greg Malcolm is an accomplished guitarist with an extensive music history. He has composed, performed and recorded music for short films, theatre and is featured on many LP's and CD's. He toured Europe in 1995 and 2003 -2004, and has performed extensively throughout New Zealand art galleries and music venues.

Marc Howe is a music tutor and has been a player in the Christchurch music scene since his teens, originally playing bass with the Triffids.

Chris O'Connor has been a regular performer at the Wellington International Jazz Festival and the New Zealand Festival of the Arts, performing with artists including Steve Lacy (USA), Mike Nock (NZ), Evan Parker (ENG), Toshimaru Nakamura (JAP) and many others. 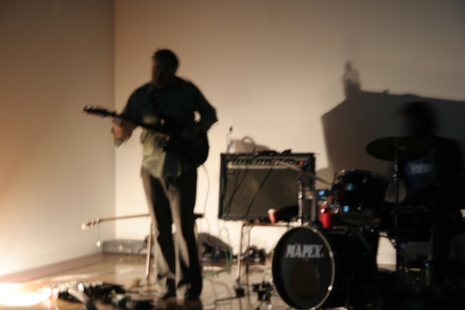