Janine Eisenächer  is a feminist performance artist, curator, and writer based in Berlin. She develops solo, duo, and group performances as well as interventions in public space in which she deals with the subjects of work and collaboration, focusing on specific questions related to identity, gender, (post-)colonialism, racism, and activism. In her lecture and sound performance series Eat Your Enemy, which is based upon the Brazilian vanguard cultural concept 'Antropofagia' (a rejection of Portugese social and literary norms in favour of indigenous knowledges), Eisenächer  discusses artists' labour as well as the politics and economies at play in the art field. Furthermore, she investigates strategies of subversion through processes of incorporation/ appropriation, transformation, and (self-)empowerment. In her research-based performances, she works with texts, objects, sounds, voice, and video, and she is particularly interested in the role of action-based material sounds in performance art as well as in the interrelations between the senses of seeing, listening, and touching in this genre.

Janine Eisenächer  was a founder member of the Berlin-based performance collectives Berlin n@work, (e)at_work, and Eisenaecher/Harder CLAIMS (all 2005/06-2011). She was a co-curator of the monthly performance art event Performer Stammtisch (2007-2011) and of the Platform Young Performance Artists (2010 and 2011) in Berlin. She is a board member of the self-organised art association Flutgraben e.V. in Berlin (since 2008) and part of the artist group and collective institution-critical practice Inverse Institution (since 2011). Since 2006, Janine presented her works in various, mostly self-organised performance art-related events and festivals across Europe and North America. She studied Theatre, Comparative Literature, and Philosophy at Freie Universitaet, Berlin, and holds an M.A. degree in Theatre Studies. Janine is the 2017 Goethe-Institut New Zealand Artist in Residence and is currently based in Wellington. 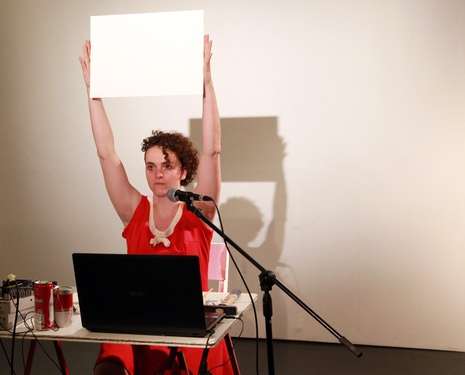