Light Turned Down
UK 2001Vision:D-Fuse Sound:Scanner 5 mins
‘Works by others have inspired me within sound to leave
the formal structures of rhythm, melody and composition
behind and seek new solutions in new methods of
explication and exploration, wherever they may lie.’ —
Robin Rimbaud aka Scanner.

What Exactly Is He Trying to Sell?
New Zealand 2002 Sound/Vision: Greg Wood 35mm/16mm/8mm/ Video 4 mins
An amalgam of sound and picture crafted with the sensitivity of a motorway pile-up.TV advertising is exploited and subverted through a process of fragmented montage.
Infinity

Pussyfoot
UK 2001 Director:AddictiveTV Producers:Nick Clarke, Graham Daniels Music:Spacer Pussyfoot Records 10 mins
Spacer and Addictive TV take you on a thumping nonlinear audiovisual trip around the world, from the streets of LA to the deserts of the Middle East - via London. 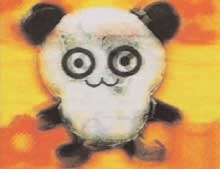 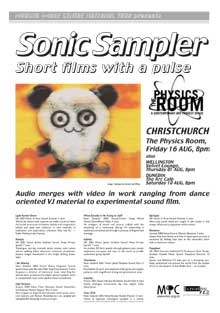